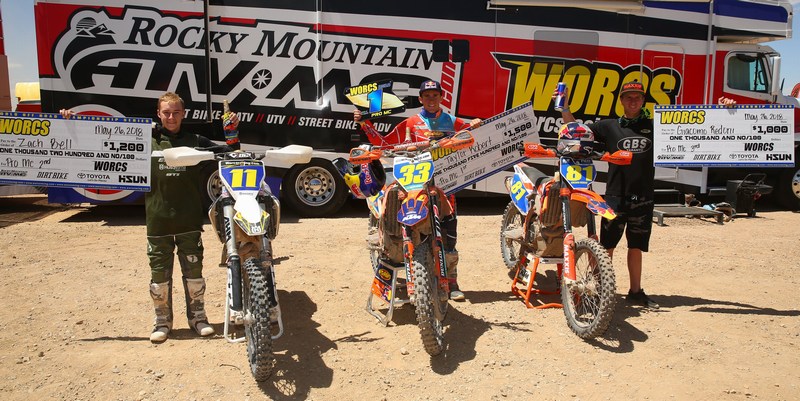 Iron Mine is known for its big ski jumps that allow for big air. The circuit also featured small endurocross section with logs and tires combined with its motocross track. Despite the best efforts of series officials to water the track, dust was a major issue and played a considerable factor in the outcome of the races.

Though he missed two races earlier this season due to injury, Taylor Robert is doing everything in his power to rebound and move up in the points rank. After starting second at the start, Robert took the lead on lap two and never looked back on his KTM. “It was really hard to catch up to Zach because of the dust and he was riding really well,” said Robert. “It was really fast, really square edged, and really dusty. I’m glad to stay on top and bring home another win. This is all I can do; I’m trying to win as many races as I can. I’m doing everything I can to get back into the championship.”

Bell’s runner-up finish allowed him to gain some crucial ground in the championship chase and he remains third in points. Bell took the holeshot at the start of the race and he challenged Robert until he went off-track on the back section of the circuit and lost time. “I tried to latch onto Taylor and learn some of his lines, but I made a big mistake in the back and got tangled up in the banners,” said Bell. “I was riding well all day, but Taylor has that edge on us. I have a good long break now to work on myself, and go on to bigger and better things.”

It took Redondi several laps to come to grips with the high-speed sections of the track. Despite the learning curve, the Italian racer padded his points lead with his fourth consecutive podium. “This is my first race at this speed, but I really enjoyed it,” said Redondi. “I got a little bit of arm pump at the beginning, but I closed up on Zach for the last two laps. We gained two points on Sutherlin, so this is good for the championship.” 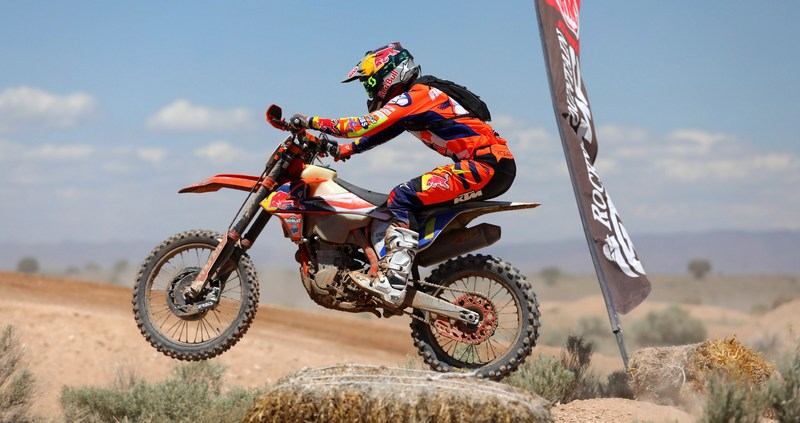 Sutherlin ran third for most of the race before falling to fourth in the second half of the event. He remains second in points. “I took an early pit and Giacomo got in front of me,” said Sutherlin. “I was chasing him down and ended up fourth. We have three months off now, so we’ll do some development on the bike and some good solid training. We’ll come back and put that thing back on the top of the box.” 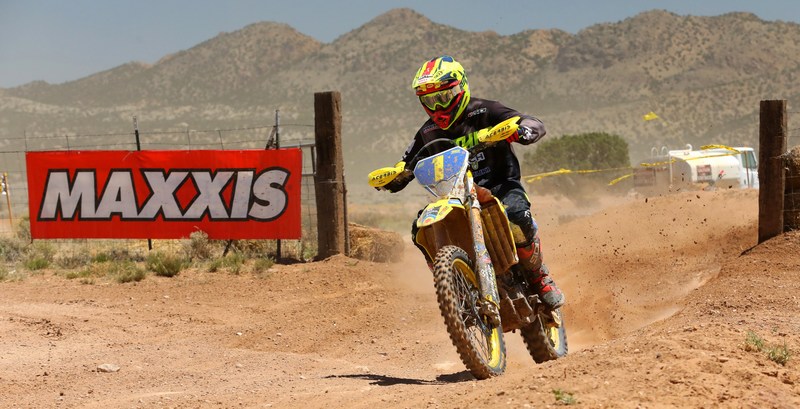 In Pro 2, Austin Serpa won his second race in a row on his KTM. Tallon LaFontaine finished second on a Husqvarna, ahead of Mitch Anderson’s KTM.

Serpa has come on strong at the last few races. He took the holeshot and never surrendered the lead, riding clean air for the whole race. “The dust worked in my favor,” said Serpa. “I was able to put the hammer down and put some time on people with a clear track. I got sick and tired of not finishing on the podium, so I just starting kicking my own butt.”

LaFontaine made his second WORCS start of the season. He debuted a new Three Brothers/STI Husqvarna here and notched his second podium finish of the season. “The guys at Three Brothers/STI got me a Husqvarna and here I am,” said LaFontaine. “I’ll be running this and Big6 for the rest of this year and all of next year. This was definitely more off road than the previous race. It was gnarly and I definitely need to get used to it.” 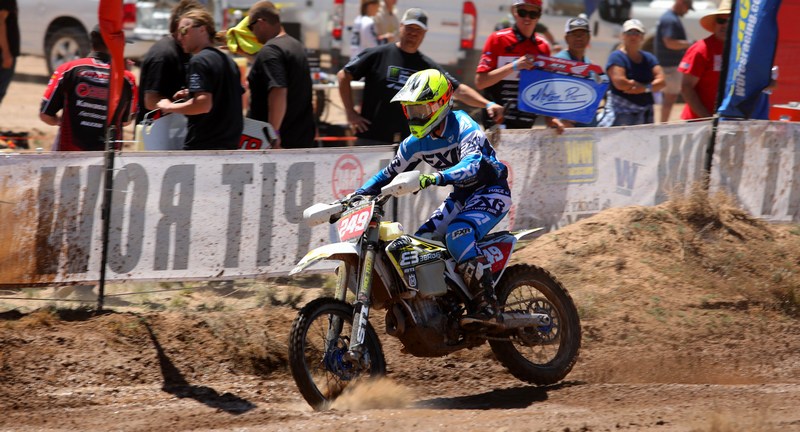 Anderson maintained his points lead with his fifth podium of the season. He has finished on the podium in every WORCS race this season. “I got a decent start in the top three and that set the pace,” said Anderson. “I was fighting the mental battle at the halfway point so I pitted and pinned it from there. I was closing in on the second and the leader at the end. We’ll take a podium, but we’re fighting for more. I know I’m capable of more.” 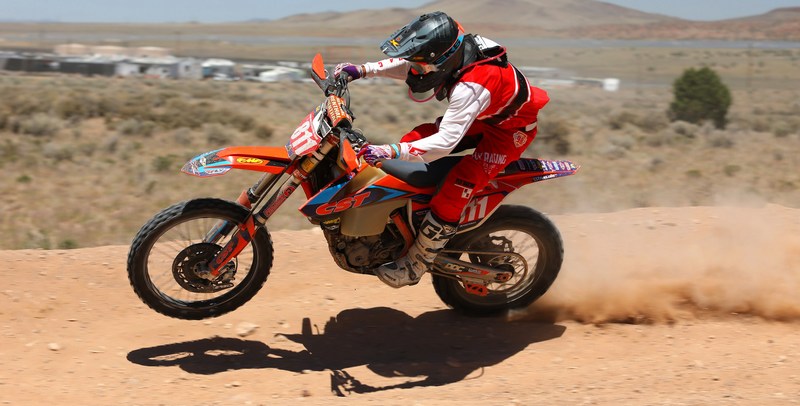 In Pro 2 Lights, Collin Elliott won his third consecutive race on his Yamaha. Zane Roberts was second on a Husqvarna, ahead of Spenser Wilton’s KTM. 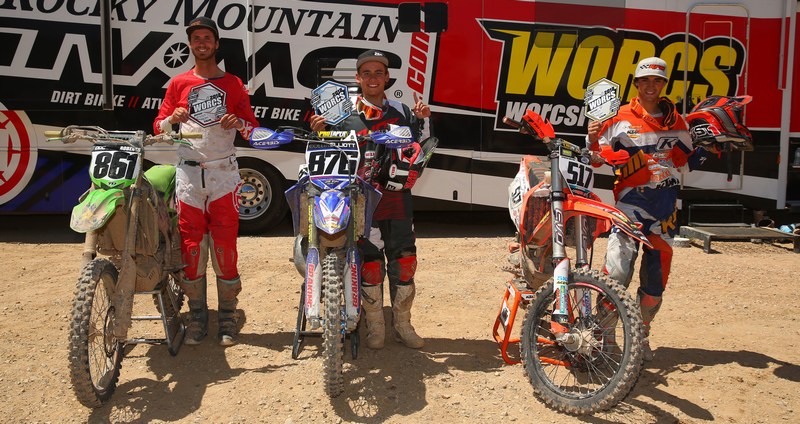 Though the gates were slow to drop at the start, Elliott took the holeshot. From there he wasn’t bested and he continued his perfect streak this season, winning every race in which he’s competed. “I’m glad to get three and hopefully we’ll come back for a fourth one after the summer break,” said Elliott. “The gates hesitated at the start, but I was still able to get the holeshot. Zane didn’t make it easy for me. He was on my tail the whole time.”

Roberts returned to racing after a seventh-month hiatus, during which he healed from knee surgery. He was running his practice bike in the race. Wilton maintained his points lead with his third-place run. The Canadian rider has now finished on the podium in every race this season.

The WORCS Series now heads into the summer break. The series will return to action September 14-16 at Glen Helen Raceway in Devore, CA.