Devore, CA  – Taylor Robert returned to his familiar spot at the top of the podium, winning round nine of the Rocky Mountain ATV MC WORCS Series Presented by Polaris RZR and Dirt Bike at Glen Helen Raceway. Robert’s seventh win of the season will allow him to clinch the Pro Championship by merely finishing the next race. Zach Bell finished second, ahead of Dante Oliveira, Thad Duvall, and Gary Sutherlin. 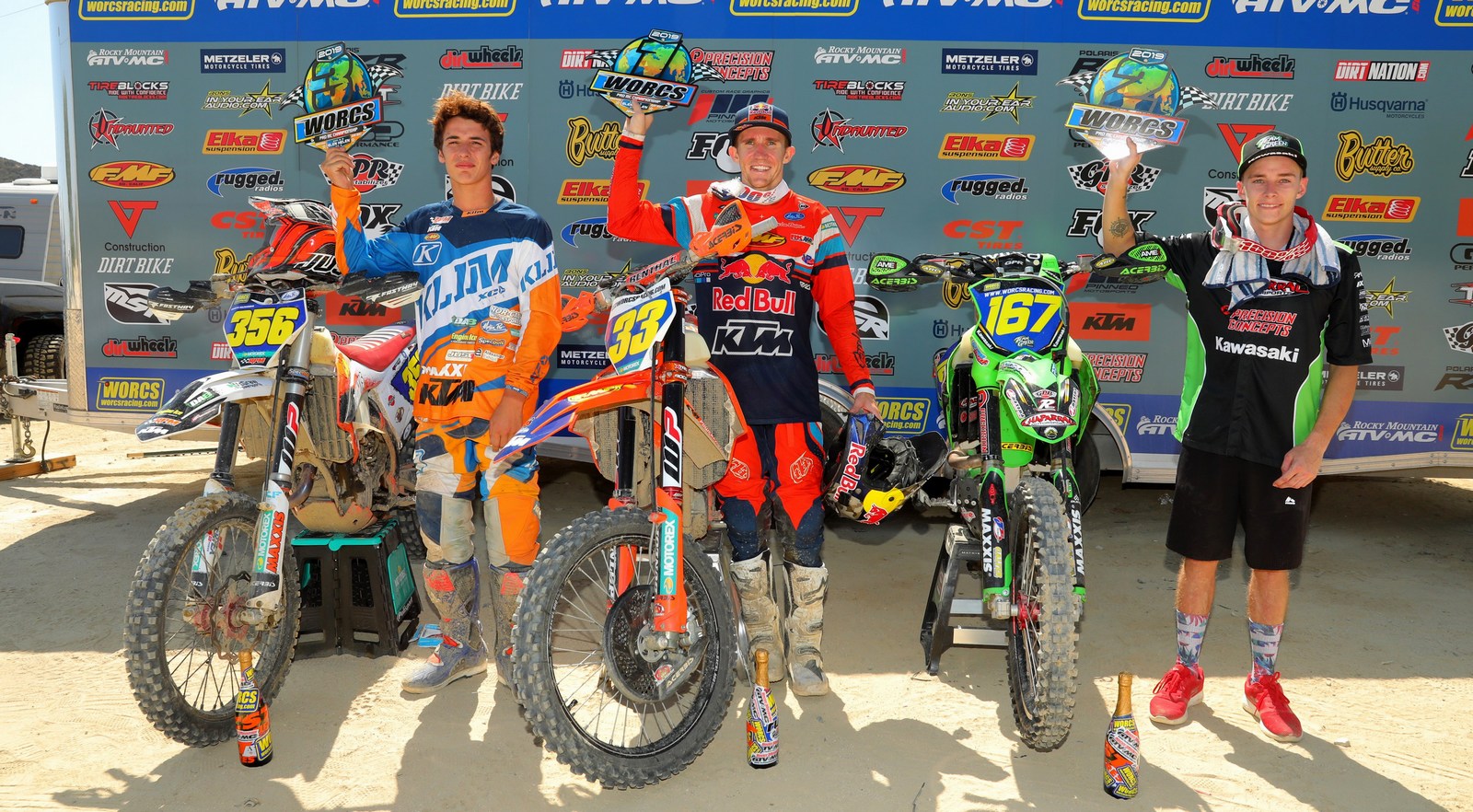 The two-hour race was held on a shortened version of the typical WORCS layout. Officials shortened the track by removing a lot of the single track to allow them to better keep it watered and keep down the dust. That made the track much faster. They also added a new section with an uphill triple, which only a few of the top pros attempted to clear

Temperatures were brutal all weekend with the mercury climbing past the century mark on Friday and Saturday. On Sunday, an onshore flow cooled it off in the morning and temperatures in mid-80s at the start of the race.

Robert and Bell fought it out at the start and Robert took the holeshot on his KTM. Bell, who set the top qualifying time on his Kawasaki, stayed with Robert for first hour before pitting. Due to a tight riverbed section that led to a bottleneck, several bikes in other classes got stuck. During the last 40 minutes of the race Taylor had to wait for the traffic to clear and his lead evaporated. However, Robert pulled away in the waning laps and went on to take the victory. 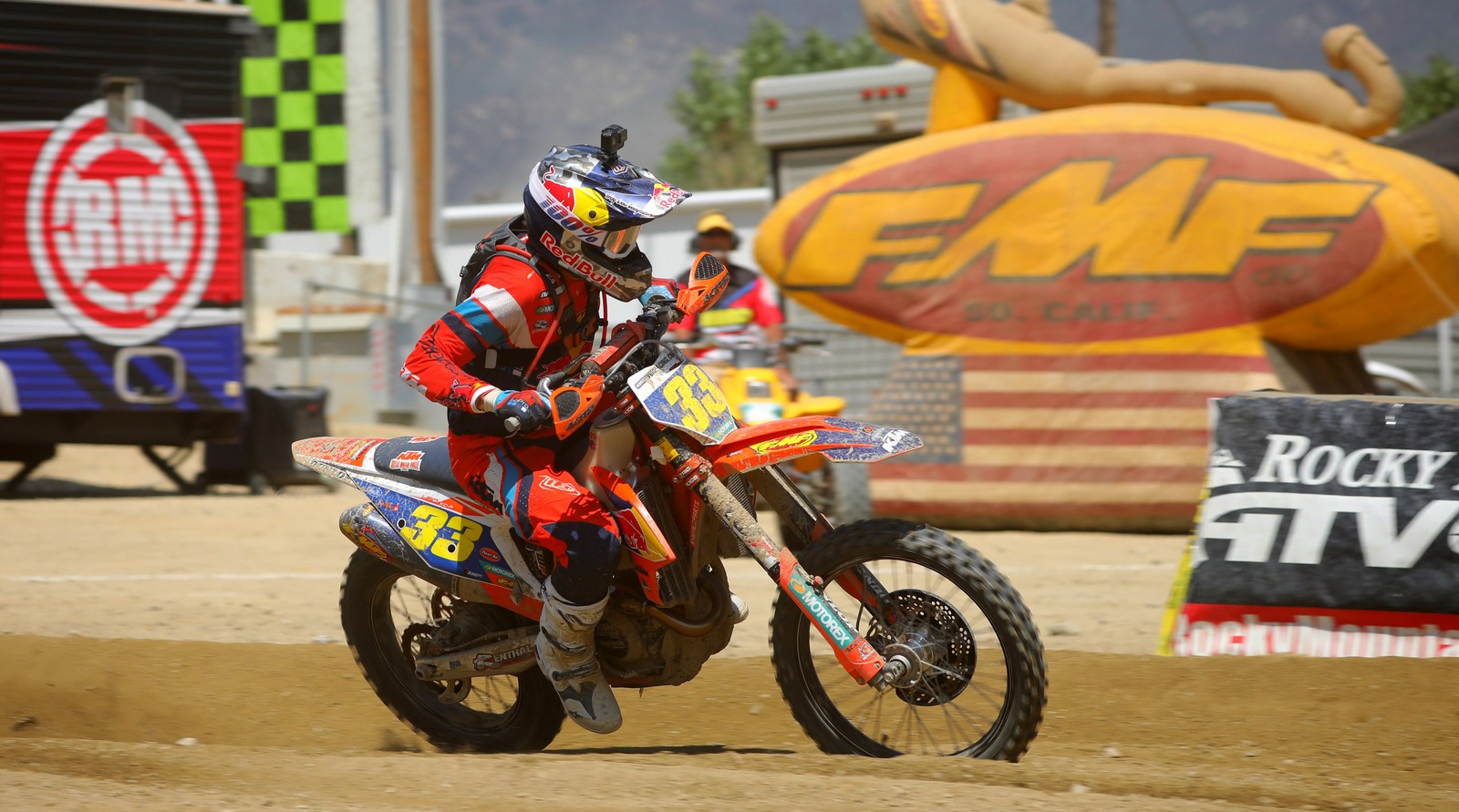 “I got off to a great start and tried to do everything I could to stay in front of Zach,” said Robert. “It was really a flawless race other than that one bottleneck. This track was even fast for what I like to do. They used all of the wide-open stuff so they could keep water on it, and it made for a really high-speed track.”

Bell netted his fourth runner-up finish of the season and now sits third in points. After pitting, he crashed and spent precious seconds getting his bike back on track. Though a motocross racer by experience, Bell is learning quickly to adapt to the many different types of terrain that comprise WORCS tracks and hadn’t it been for that one mistake, he likely would have challenged Robert at the end. “That one mistake just sent me back and put me in second,” said Bell. “They’re making these tracks more and more technical and I’m having to adapt to it and try and get through it. It’s a learning process for me coming from Supercross and motocross, so I’m happy to even get up on the podium.”

Oliveira started third on his KTM and raced by himself for most of the first hour. Duvall put in a hard charge after difficulties early in the race and challenged Oliveira during the middle stages of the event, but Oliveira held him off when Duvall’s machine suffered mechanical issues. Oliveira showed great patience in making his way through the thick traffic. “I just had to be smart and pick my way through it,” said Oliveira. “I had to stay calm and find a smooth line around them. The course was super fun and the racing was closer than it was all year. The Pro class is stacked this year.” 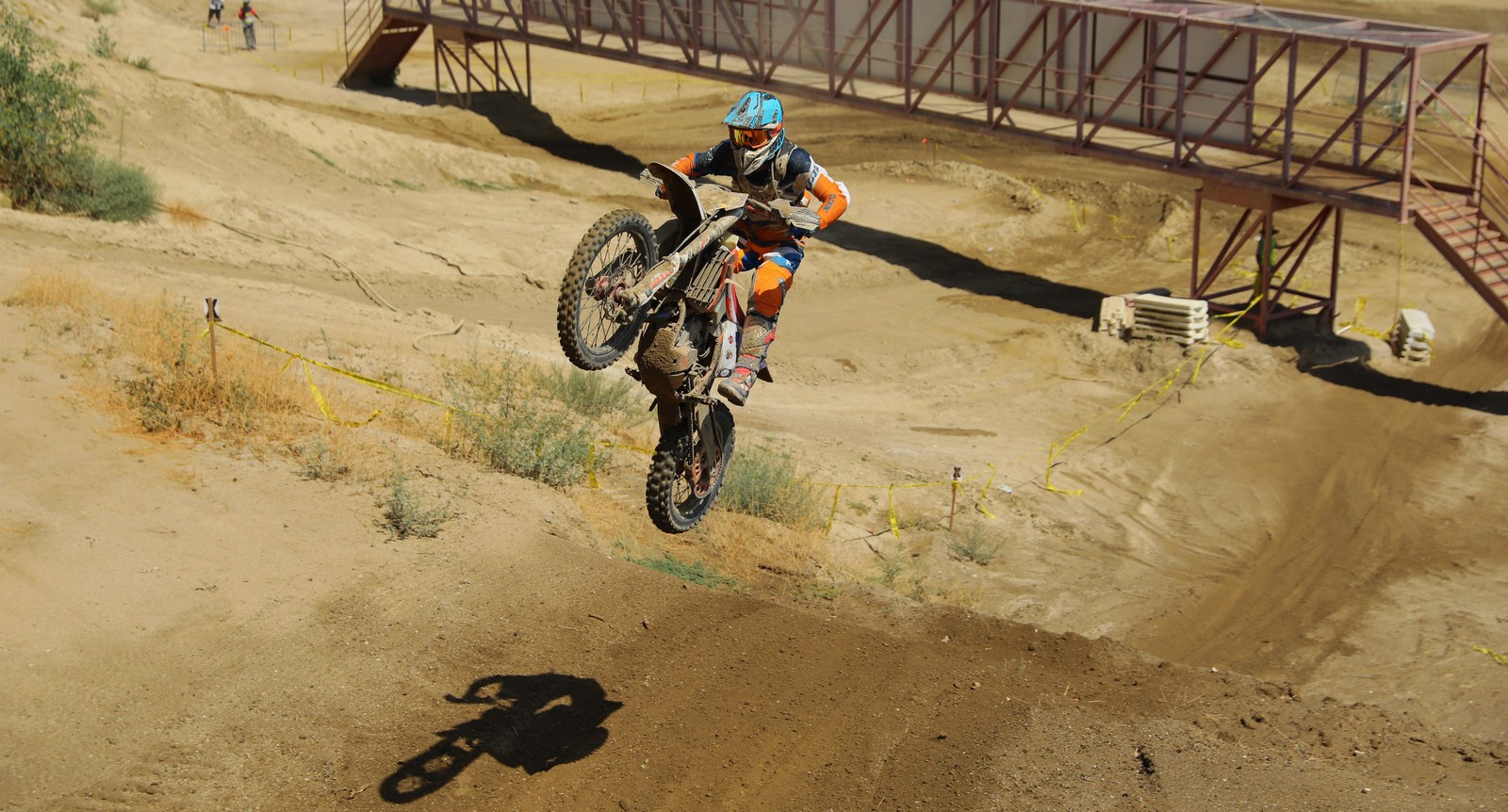 After winning the last two races in Washington, Duvall elected to run this round on his Husqvarna before heading back east to rejoin the GNCC Series. Duvall hopes to return to the series at the season finale in Primm, NV. He recovered from a crash early in the event and nearly caught Oliveira at the end. “I got a decent start and I tried to pace these guys and learn their lines, but I made a bonehead mistake and looped the bike out,” said Duvall. “I rode as hard as I could and caught Dante there with two laps to go. As soon as I got to his rear tire, I had an issue with the bike. I scared myself trying to ride it like that, so I cruised in for fourth. These guys are the best out here so to even be in the same ballpark with them is something else.” 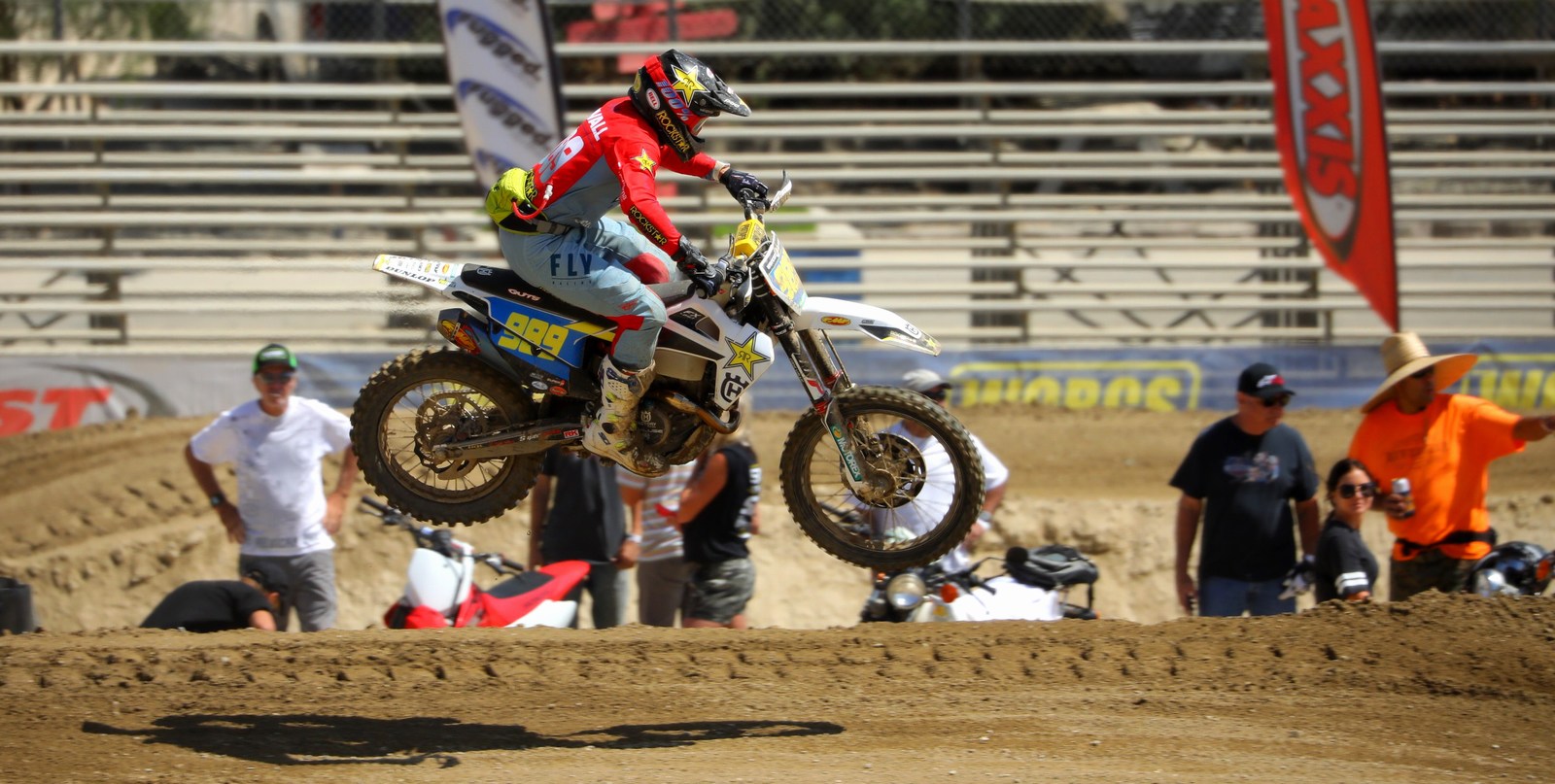 Sutherlin showed he’s making progress in recovering from injuries sustained back in May in a different series. After a decent start on his KTM, he pushed hard to finish fifth. “I got off the gate really well, but I pumped up for a few laps and needed some time to get back in rhythm,” said Sutherlin. “I lost touch with Dante and Thad, but I just kept pushing all day. I guess fifth was all we had. We still have two more rounds to get this thing back on the box.”

In Pro 2, Austin Walton scored his third consecutive victory and his fifth overall this season on his Husqvarna. Tallon Lafountaine was second on a Honda, ahead of Chance Fullerton’s Beta. Noah Kepple was fourth on a Husqvarna, followed by Austin Serpa’s KTM. Serpa now holds just a six-point lead on Walton in the championship with two rounds left. 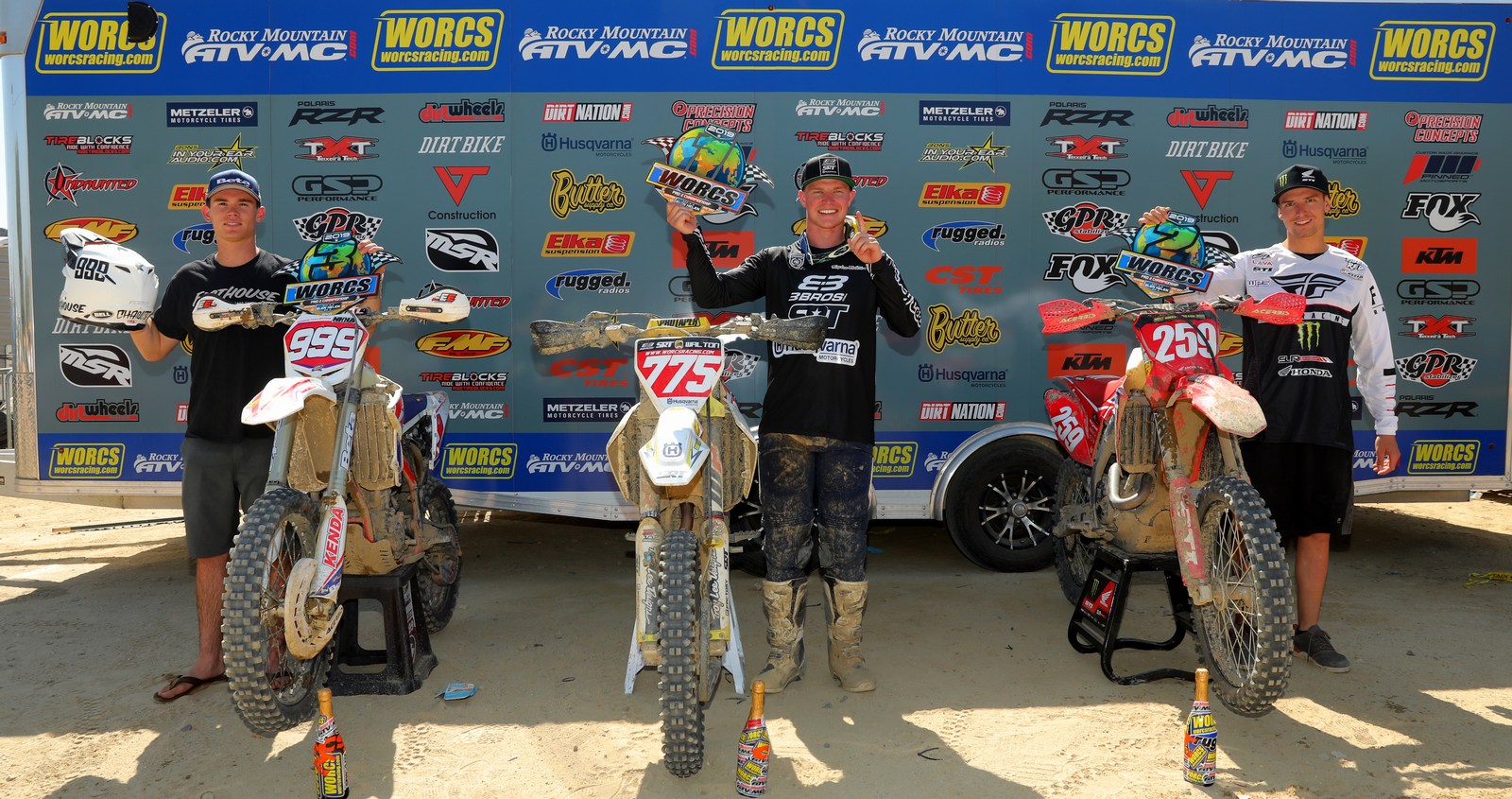 Walton also got stuck in the bottleneck. Choosing patience over ego, Walton waited it out and once clear of the traffic he held off a charging Lafountaine to net the victory. “The first lap was just a crap shoot; one guy got stuck in a section and then we all got stuck,” explained Walton. “Once we got out of there, the rest of the race went pretty smoothly. Lafountaine kept me on my toes. He was definitely there, and he was riding hard. I had to push hard and came away with the win.” 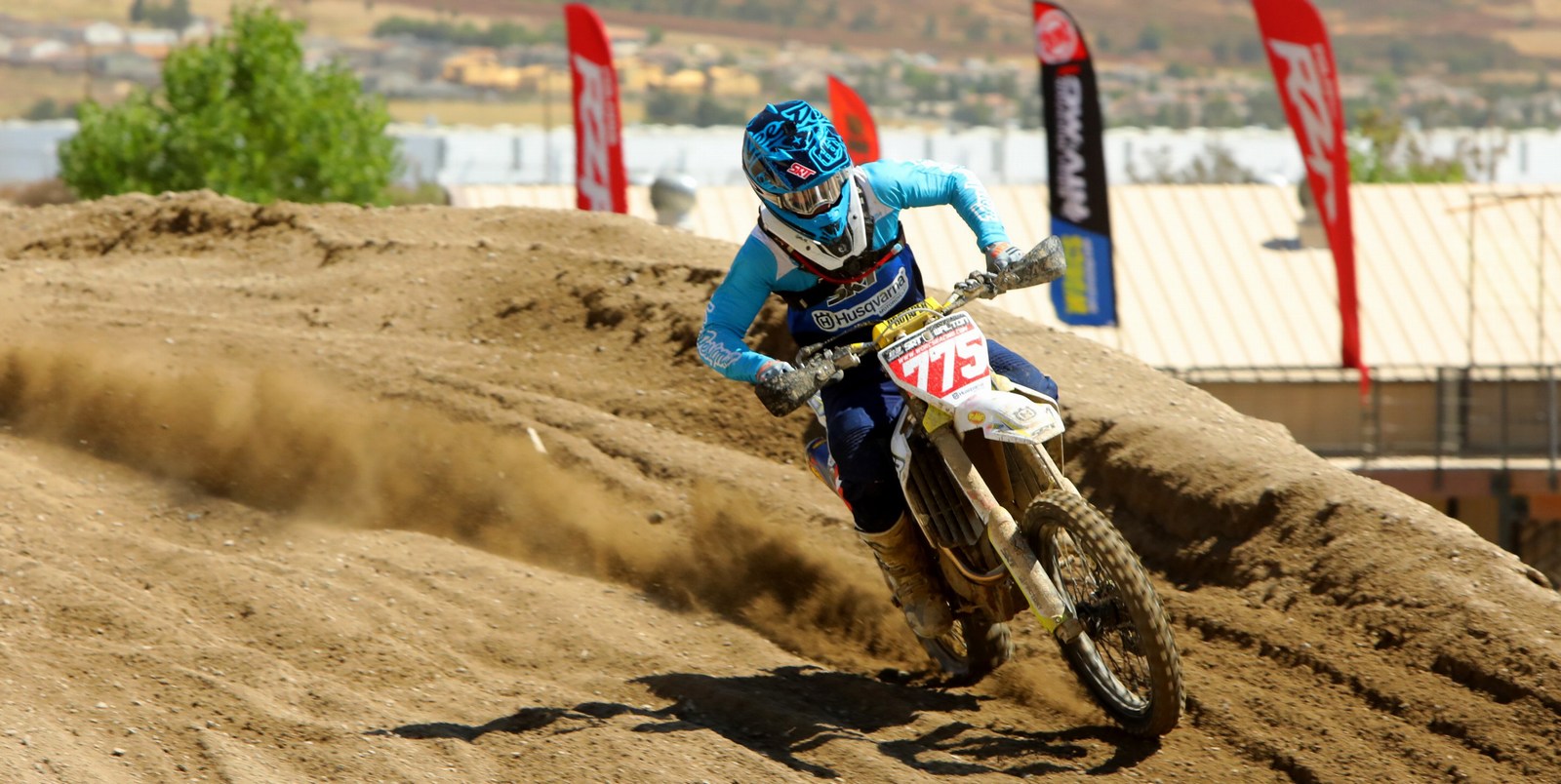 Lafountaine kept Walton honest as he paced him throughout the race. Despite falling in the Pro section and spending time waiting for traffic to clear, he hung on for his fifth runner-up finish of the season. He’s now third in points, only nine behind Walton. “The first half of the race was really good,” said Lafountaine. “I got stuck in the Pro section twice. It happened later in the race and then I fell in it. I raced with Austin for the majority of the race.” 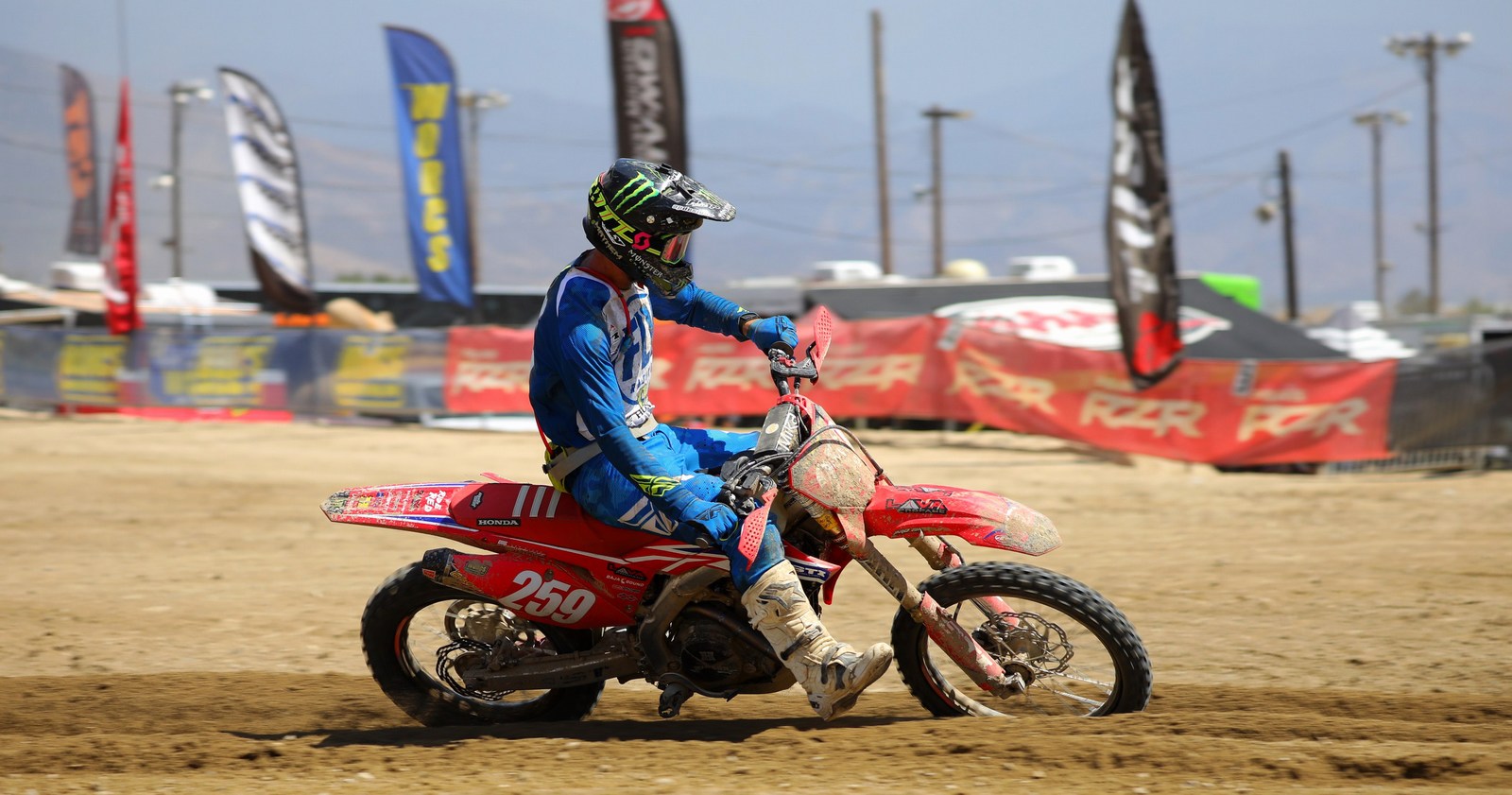 Fullerton finished third in just his third start of the season marking his first podium of the year. After a slow start, Fullerton used the Beta’s superior handling in the technical sections of the course to carry him through. “I was dead last on the start. so once I got to the bottleneck I was just trying to get people out of my way,” said Fullerton. “The Beta works well on the off-road sections, so I weaved through people in there and finished third.” 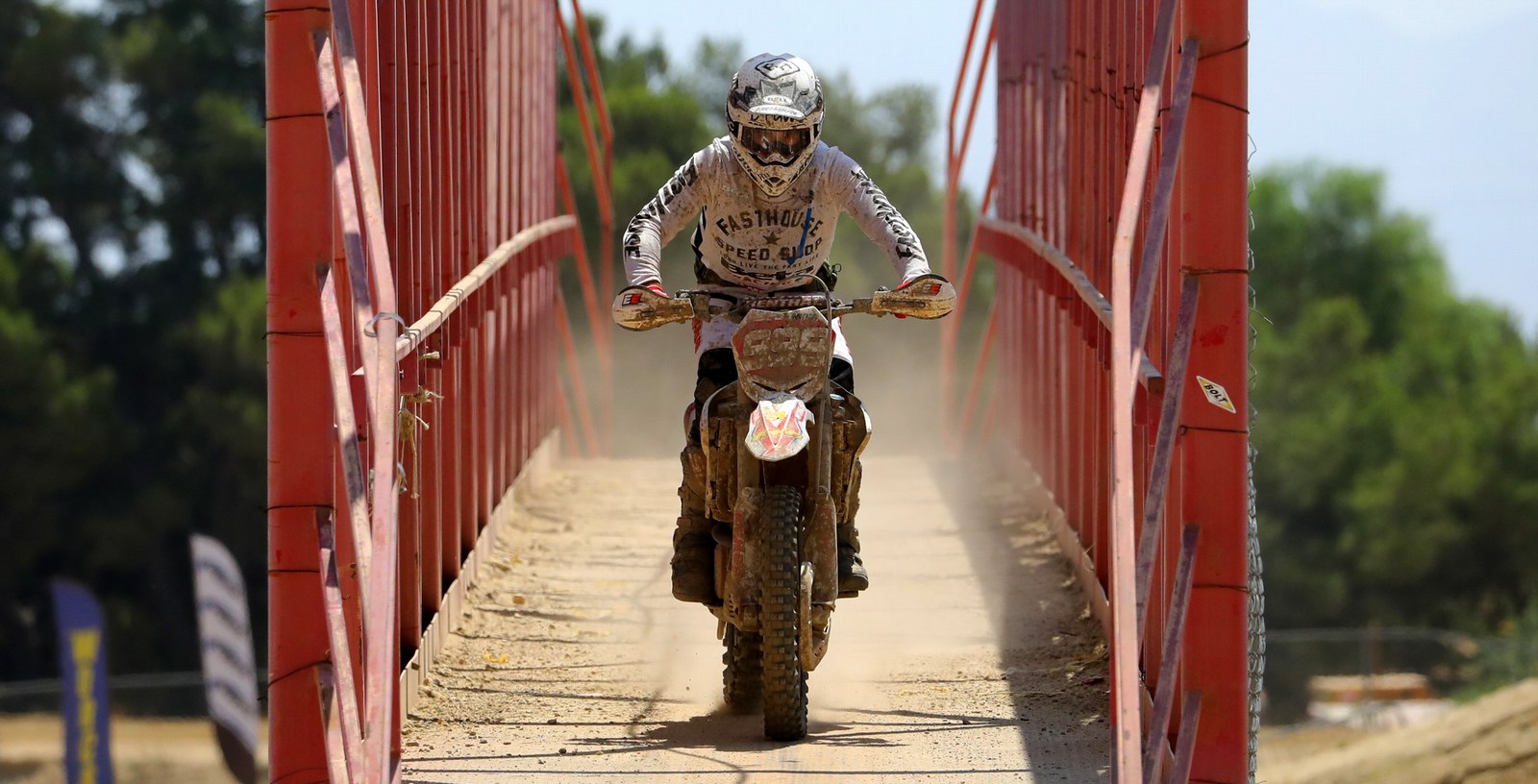 After starting fourth, Lynn, on a Yamaha, used a line he discovered early in the weekend to weave his way past Oliveira and take the lead going into the wash. Later in the race, Oliveira retook the lead, but the battle was on and Lynn fought for three laps before taking the lead for good. “I found a really good line in the Pro section so when that kid went over his bars on the first lap I stuck with that line and was in the lead,” said Lynn. “I just tried to keep my gap, but Mateo got past me in the bottleneck. I spent the next few laps riding on his tail and I finally made the pass. I rode smart and I finished first.”

Mateo Oliveira extended his championship lead to 32 points with his eighth podium of the season on his Gas Gas. Though he stuck close to Lynn at the end, he settled for second. “I got good points for the championship and I had fun,” said Mateo Oliveira. I didn’t get the best start, but midway through I took the lead for three laps. Then I made a mistake in the Pro section and I couldn’t run his pace at the end.”

Riordan scored his second podium of the season, finishing third on his KTM. Riordan won round two. He is testing the waters in WORCS this year while planning to run the full series in 2020. “Today was good and we had a lot of fun,” said Riordan. “I made up a lot of time in the technical sections and the sandy bits were good. Really the whole track was good. I’m glad I made it up on the podium.” 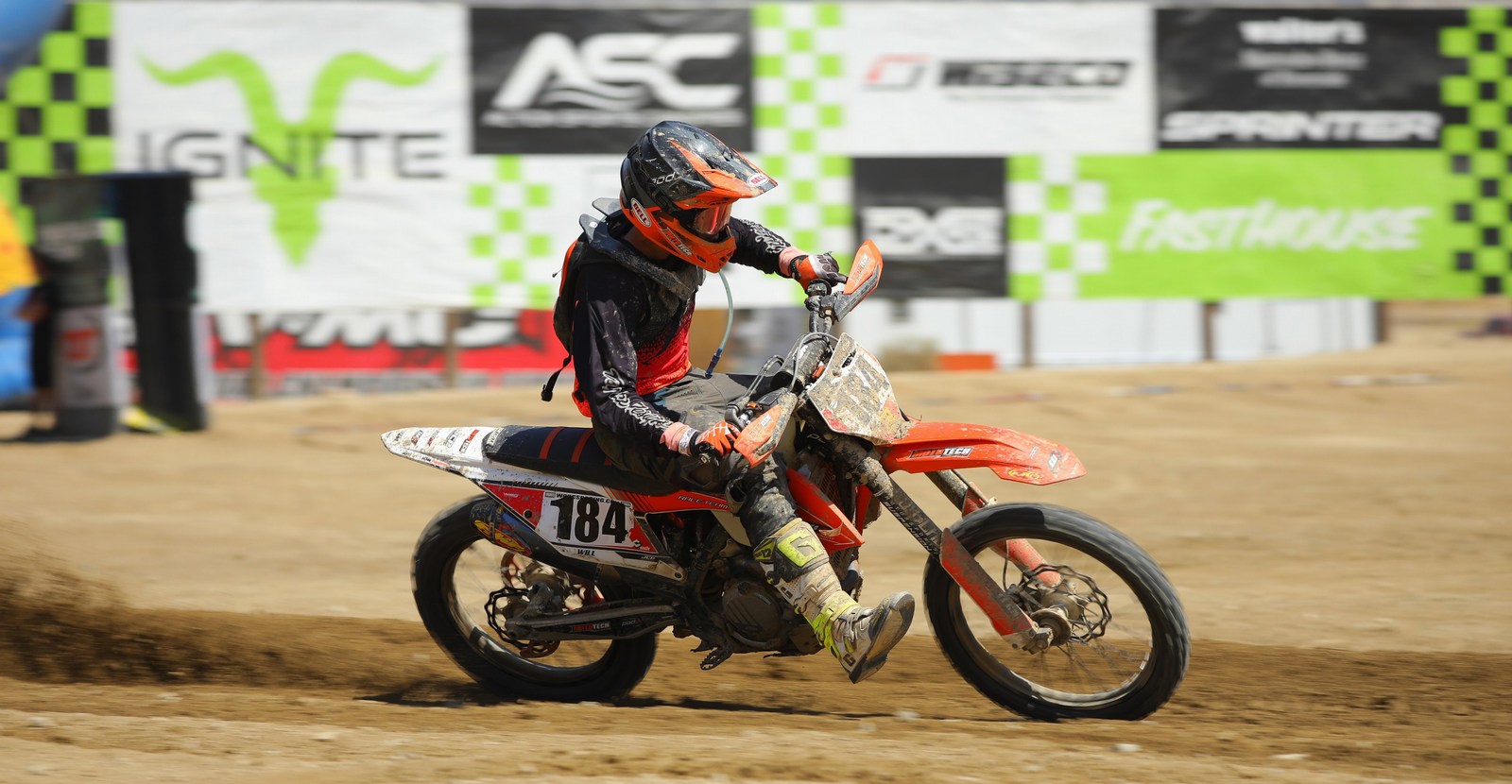 In Women Pro, Brandy Richards continued her win streak, which now stands at nine. The victory allowed her to clinch the championship. Lauren Woods was second, followed by Kaitlyn Jacobs. All were riding KTMs.

Richards started fourth but needed only four corners to catch Woods. She took the lead and then negotiated traffic to score the victory. “I did some sprinting and felt really good,” said Richards. “The high-speed stuff was really good, and I did really well sweeping the turns and in the flat track. It’s pretty exciting to clinch the championship. It should make the last few rounds a lot easier.”

Woods was quick off of her gate and snagged the holeshot. After losing the lead, she tried to hang with Richards but fell back and finished second. She was pleased to grab a podium at her home track. “I ride this track a lot so I’m pretty comfortable on the motocross sections and I like the flat switchbacks,” said Woods. “It was a little hard to see in the wash, so I just chose a line outside of the main line, held on with my knees, and gave her the beans.” 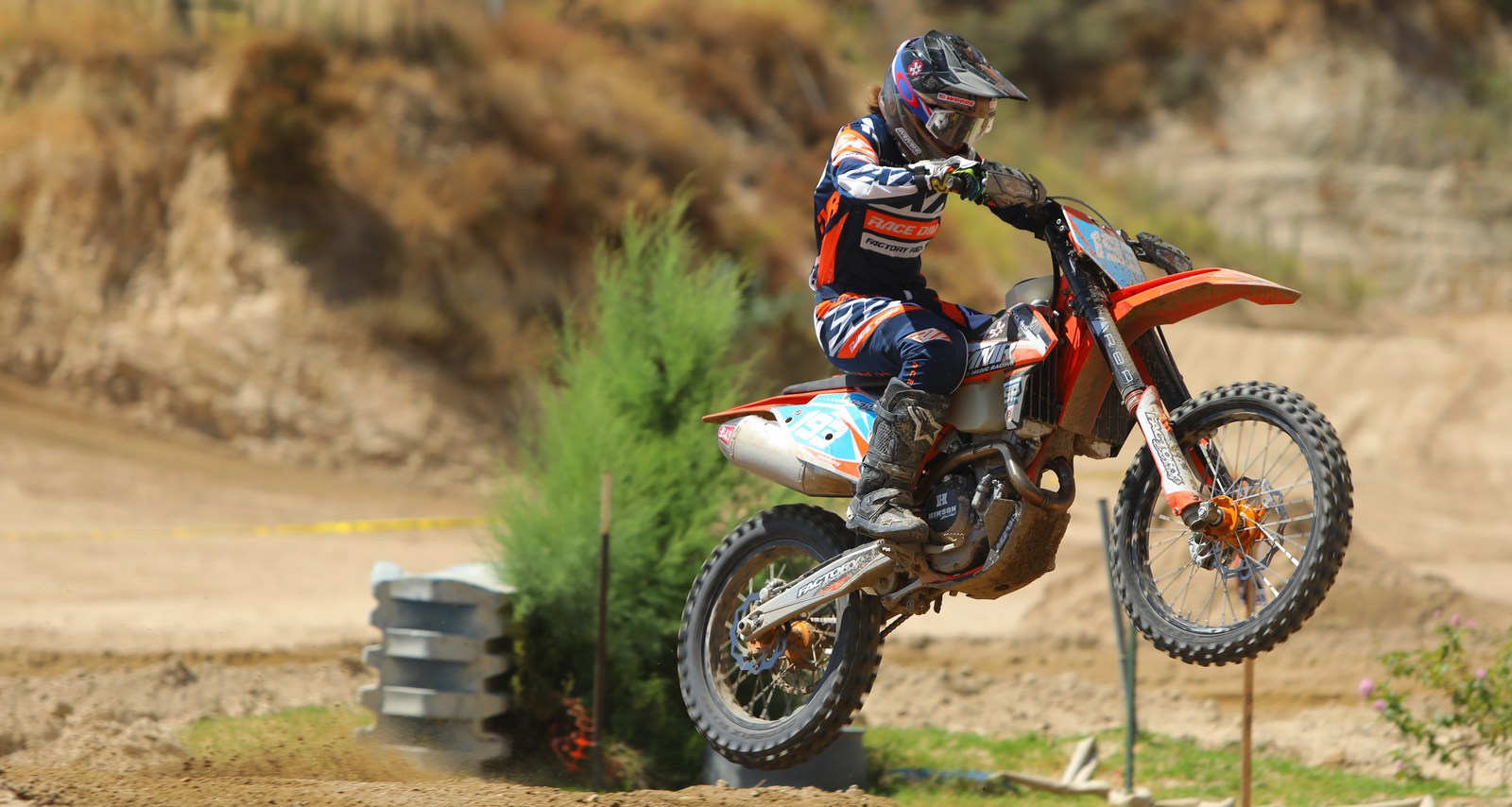 Jacobs took the third spot when Brittany Marcotte pitted. She wasn’t seriously challenged from there and snagged the final spot on the box. “I was third off the start, but I got pinched off and had to stay underneath,” said Jacobs. “Some of those straightaways on the REM track got squared edged and chopped up; that made it pretty gnarly. The heat definitely took a toll on my body.” 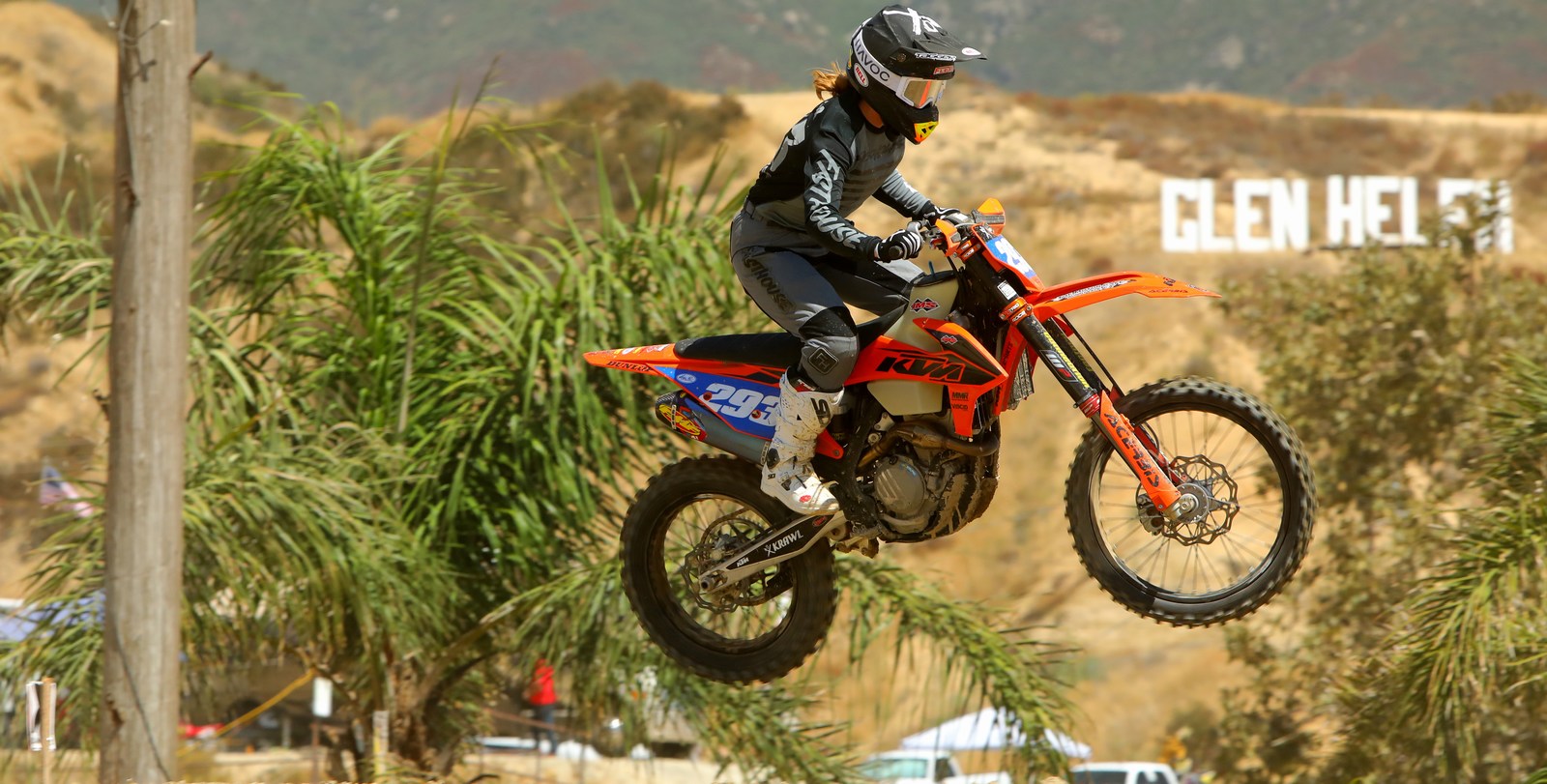 The WORCS Motorcycles next head to Honolulu Hills Raceway in Taft, CA. Round 10 of the 2019 series is being held October 11-12.