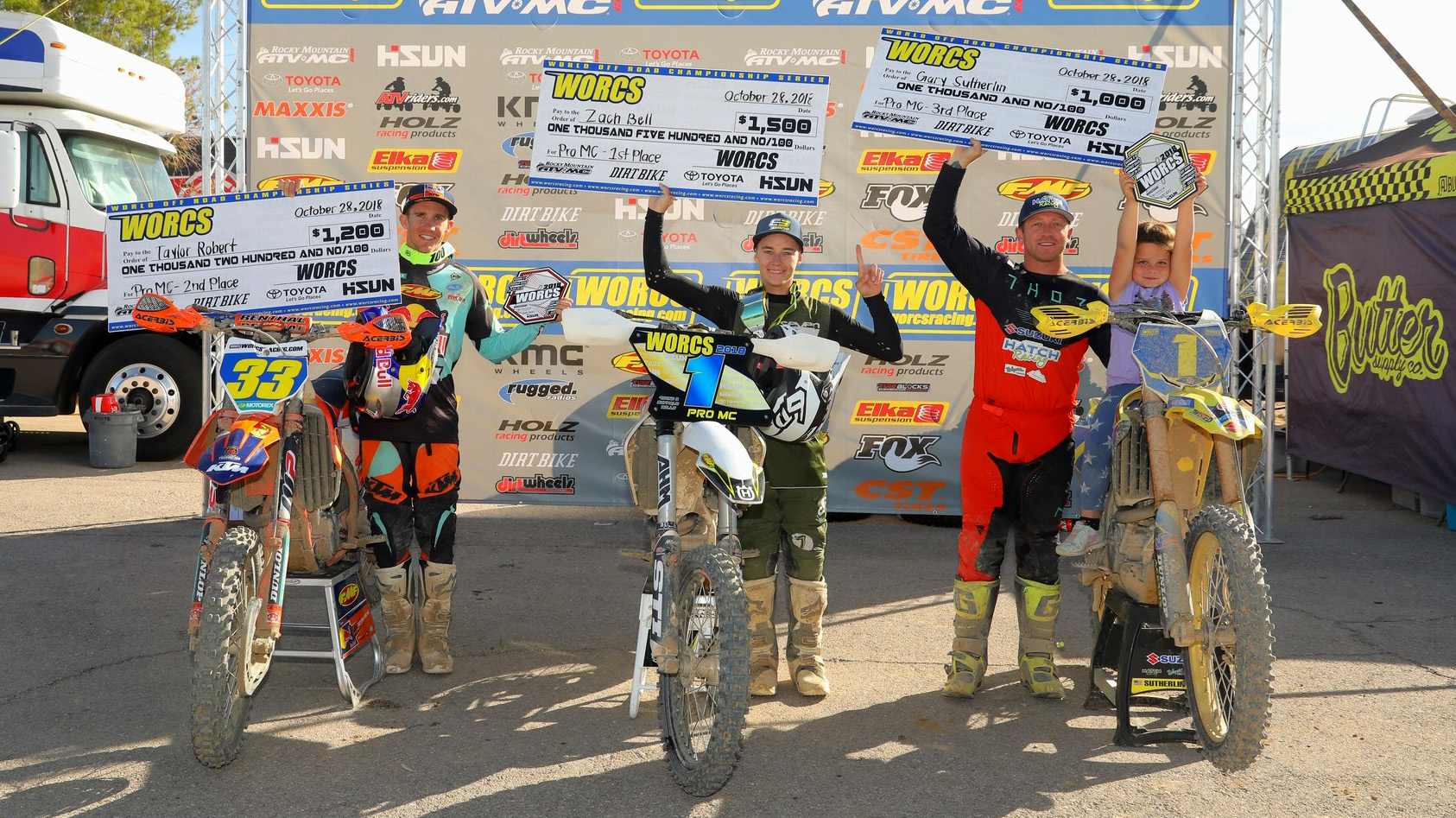 Though injuries hampered his championship hopes during the last two years, Robert had won every WORCS race he entered since 2012, so Bell played it smart on his Husqvarna. After following Robert and learning his lines, he pounced on the final lap. The two fought it out until Robert went wide just three corners from the finish handing Bell the lead and his second victory of the season.

“I know I’m fast and I know I can be up there, so just being inconsistent was my problem,” said Bell. “I just followed Taylor until the final lap and we went at it four or five times on that last lap. The track was fast with a lot of chop. Being consistent, hitting your lines, and just breathing were the keys to the race. I got a horrible start, but I caught up to Taylor and just rode with him. That was a lot of fun.”

Robert handed it to Bell. He made a last-ditch effort on his KTM going into the pavement section of the track before the finish line, but came up just short. Robert was a championship contender early in the season, but he broke both arms in a crash during testing and missed rounds two and three as a result. “Zach has been riding really well,” said Robert. “We both hung back and then went all out on the last lap. I passed him with three turns to go, but then I made a mistake and he got me back.  I thought I had it, but that’s how it goes sometimes.”

Sutherlin rode a bone stock Suzuki in the event and made it to fifth late in the race. After making a banzai move on Seeds in one of the chicanes, he moved up to third and snagged the final spot on the podium. “I wanted to get back up here and I’m happy to get the Suzuki back on the box,” said Sutherlin. “It’s been a rough few races for me. So to get up on the box and know my speed is there, I look forward to 2019 and contending for the championship again.” 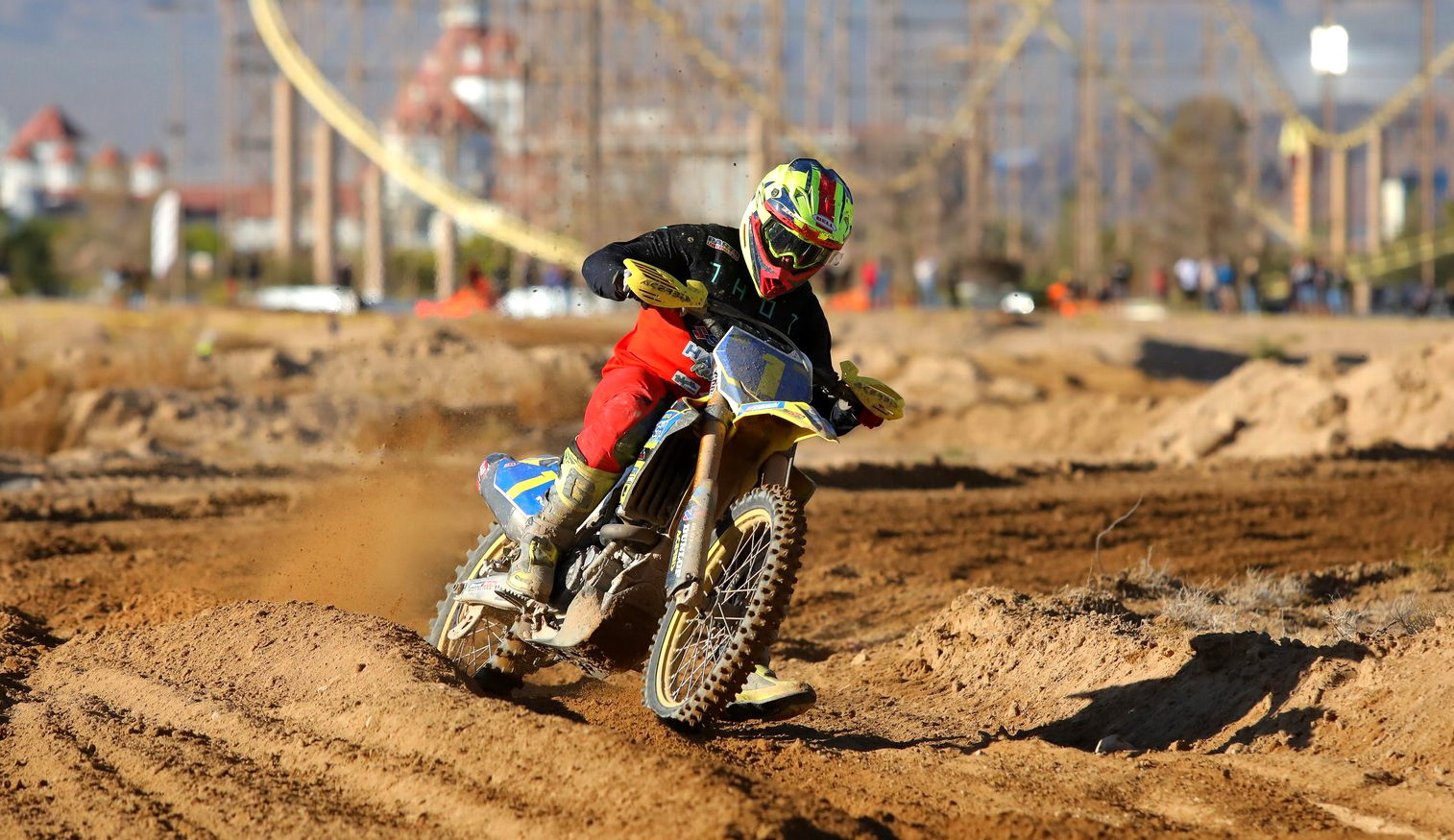 Redondi rode a conservative pace on his KTM to protect his points lead and his fourth-place finish was enough to hand him the No. 1 plate in his rookie WORCS season. The Italian racer won one race and finished on the podium six additional times this season. 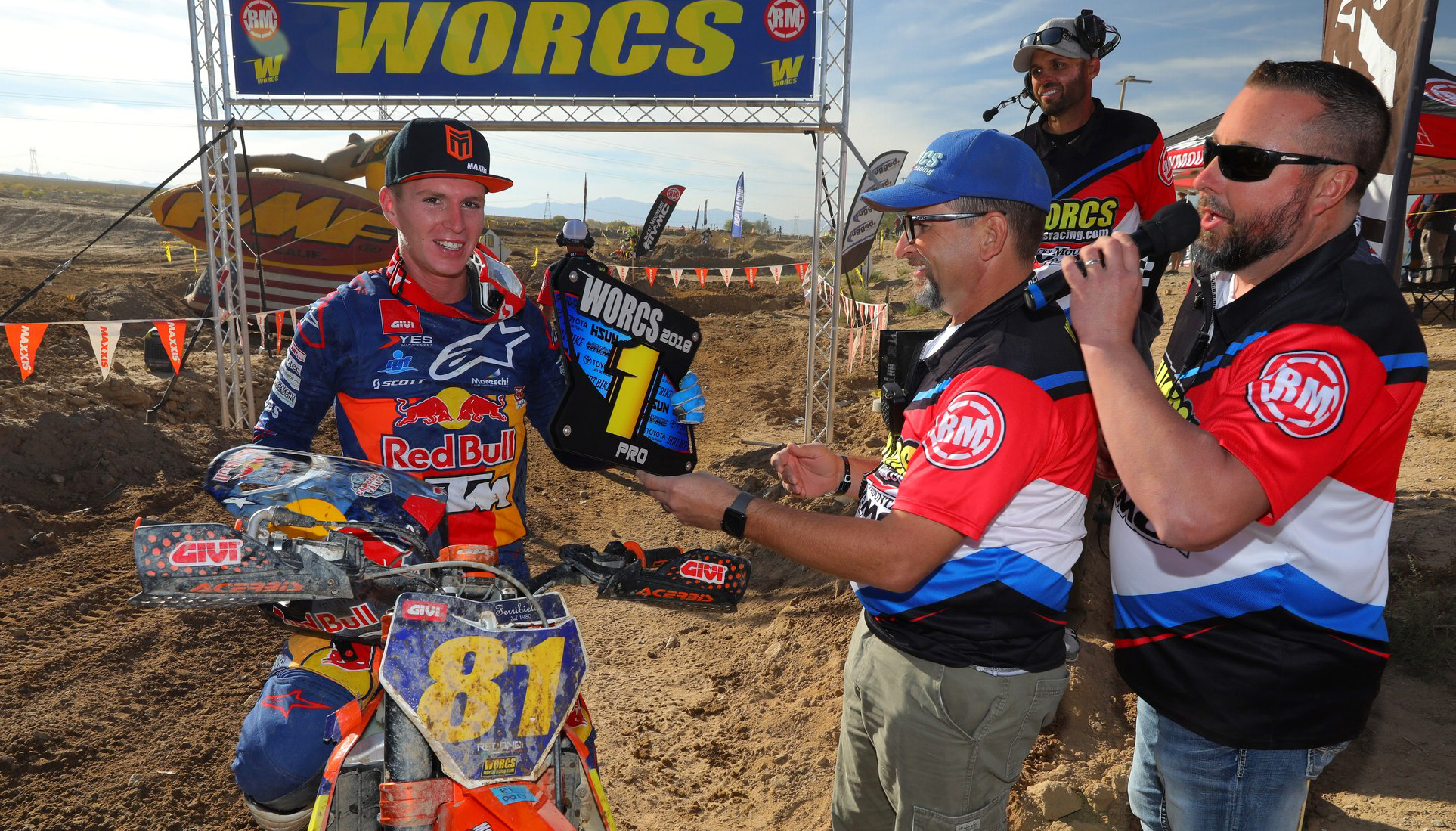 “I was really just cruising around,” admitted Redondi. “This was a transition year for the World Championship so I decided to do my dream and came to the United States. I realized my dream. I came here as a privateer and a rookie and won the championship.” 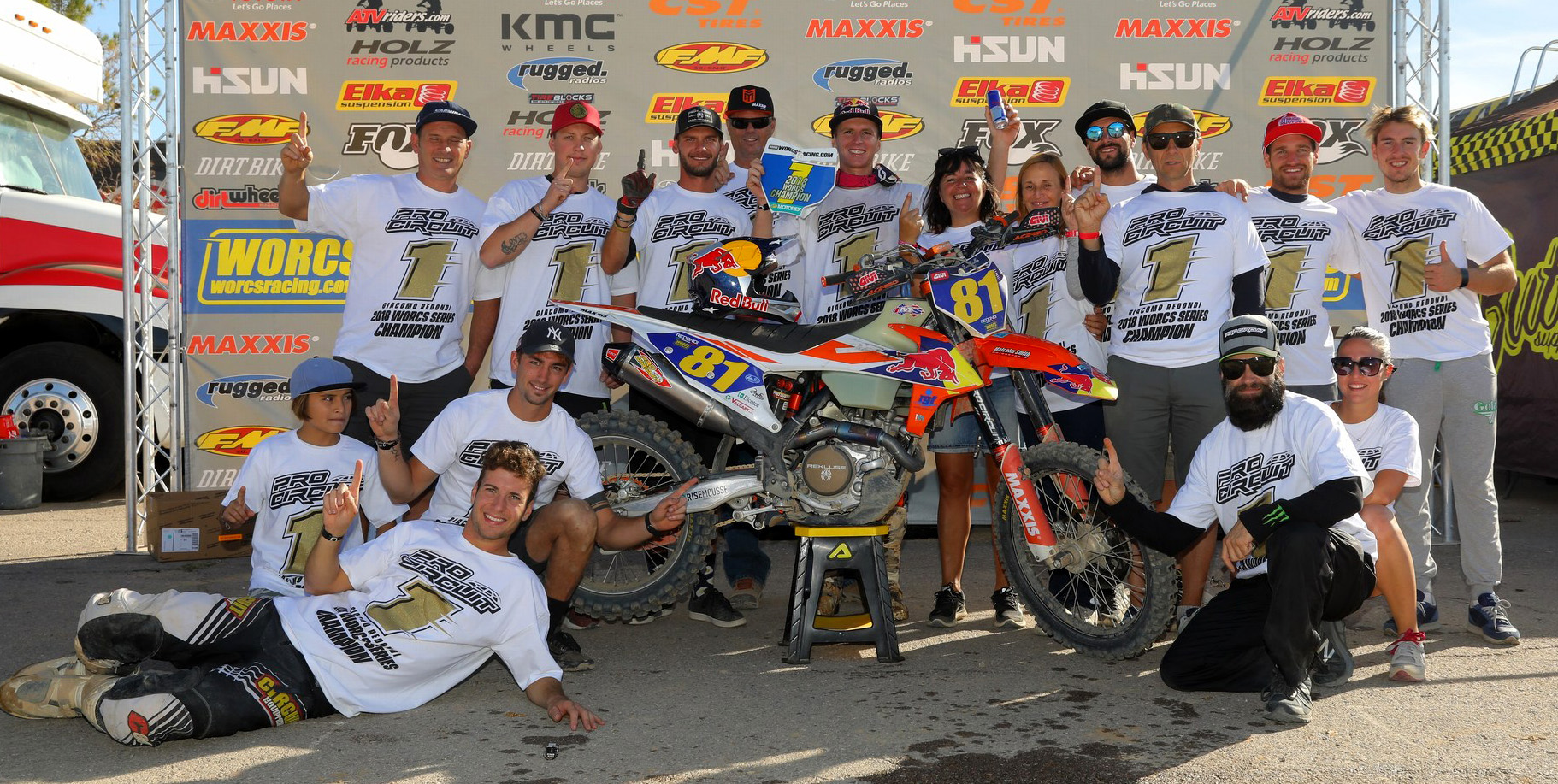 Seeds took the lead at the start of the event on his Kawasaki and had a podium spot locked before he was taken out by Sutherlin. After a tough season, he came into the final event with something to prove, and he did. “I felt excellent today,” said Seeds. “I wanted to show everyone today that I can run up front and I’m not just a fifth-place kind of guy. My heart is still in this. We’re not going to give up and hopefully I can make the whole season next year.”

In Pro 2, Tallon Lafountaine won his second consecutive race on his Husqvarna. After starting the season seemingly on a bet, he finished strong and beat out Austin Serpa for the victory. Mitch Anderson was third on his KTM and clinched the championship. 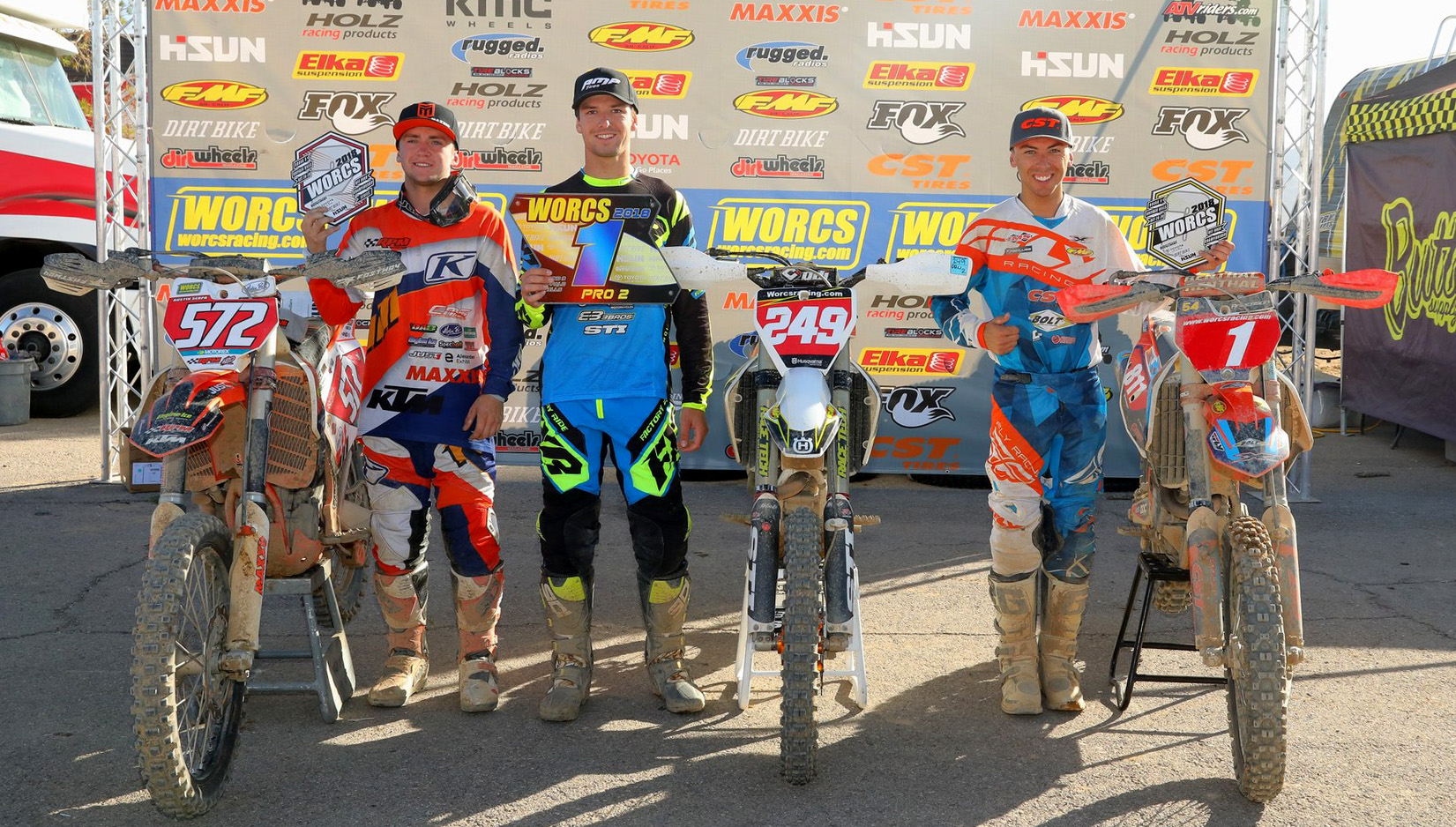 “I sprinted pretty hard for the first two laps, but then I took a pretty decent spill,” said Lafountaine. “I got up, went hard, and blew off the track again. I decided to settle down and I just kept it there. Austin and Mitch were really close so it was tough right until the end.” 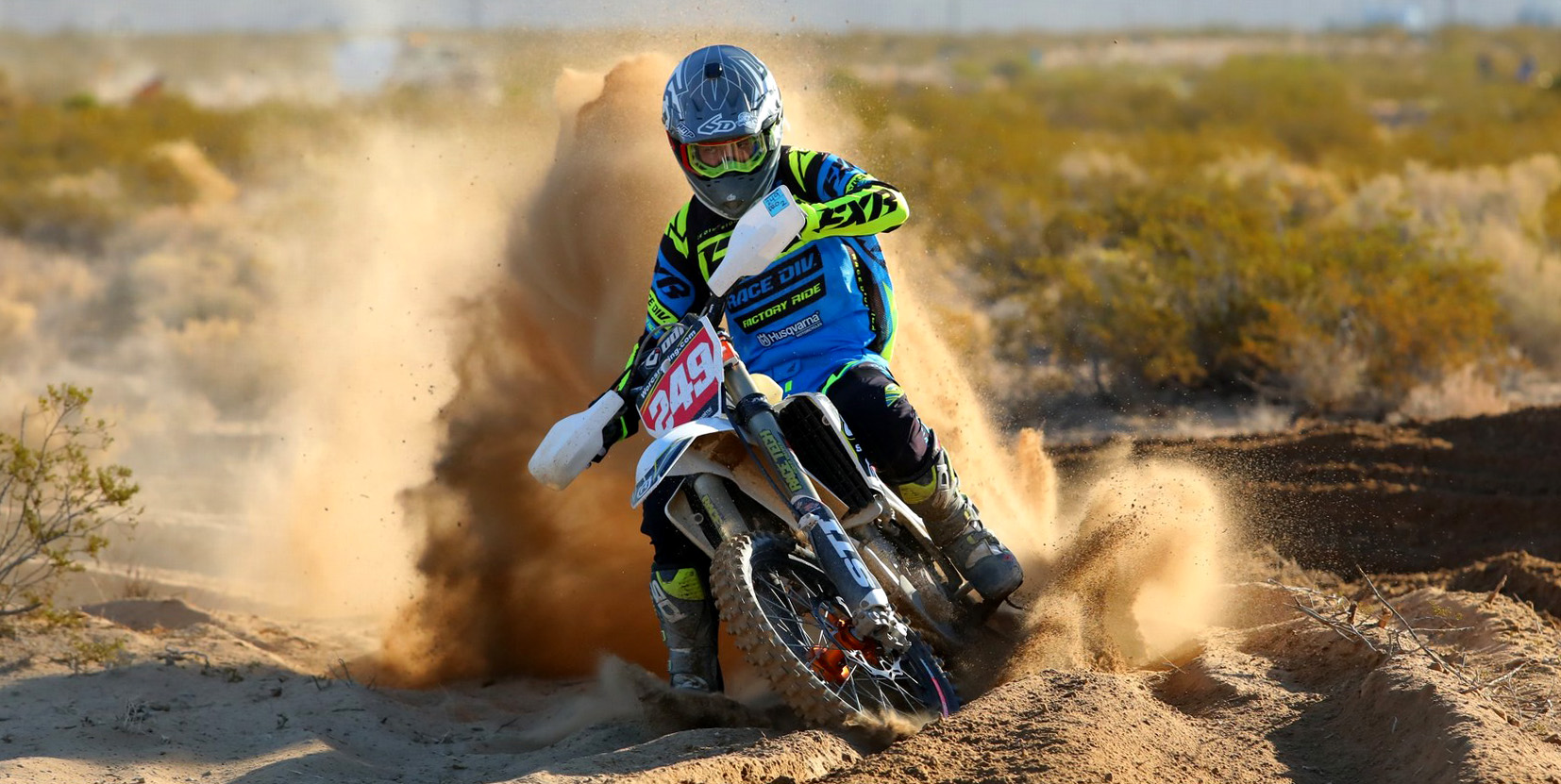 Serpa put some of his recent bad luck behind him and got back on the podium. Serpa won two races late in the season, but a fourth and then a DNF in the last two races sidelined his championship hopes. “I haven’t seen the podium since June so I’m stoked on my finish,” said Serpa. “I finished second in points.”

Anderson finished out the season the same way he started it: with consistency. Riding his CST KTM, Anderson finished on the podium at all eight races this season and scored one victory to snag the title. He plans to move up to Pro next season. “This is the biggest championship I’ve ever won,” said Anderson. “It’s like graduation day because I’m moving up to the big class next year. This is only the beginning. We have a lot of work ahead of us.” 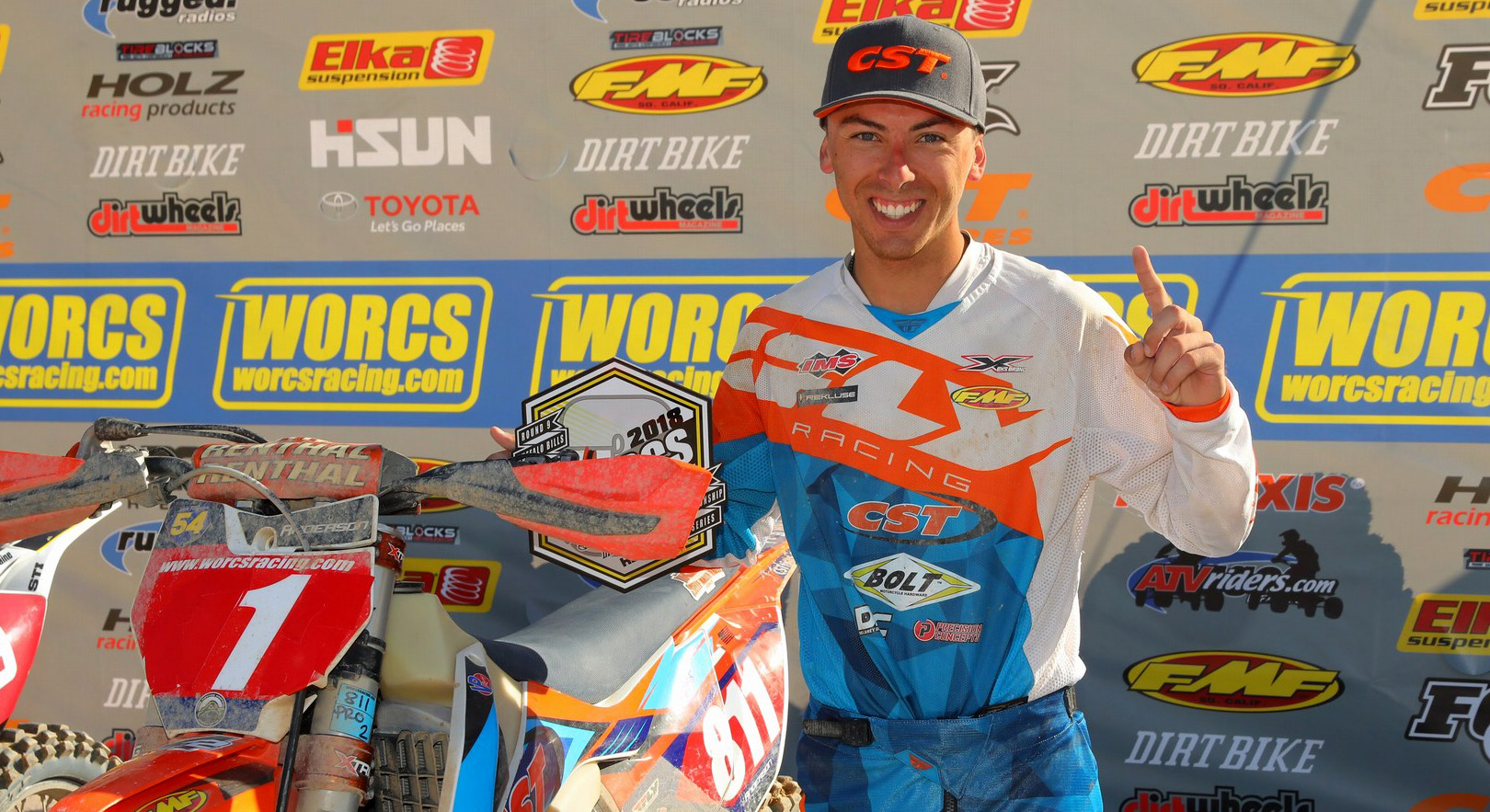 In Pro 2 Lights, Mateo Oliveira won his first race of the season. Riding a KTM, Oliveira beat out Preston Campbell and Tyler Nicholson for the win. Canadian Spenser Wilton finished seventh and clinched the championship. 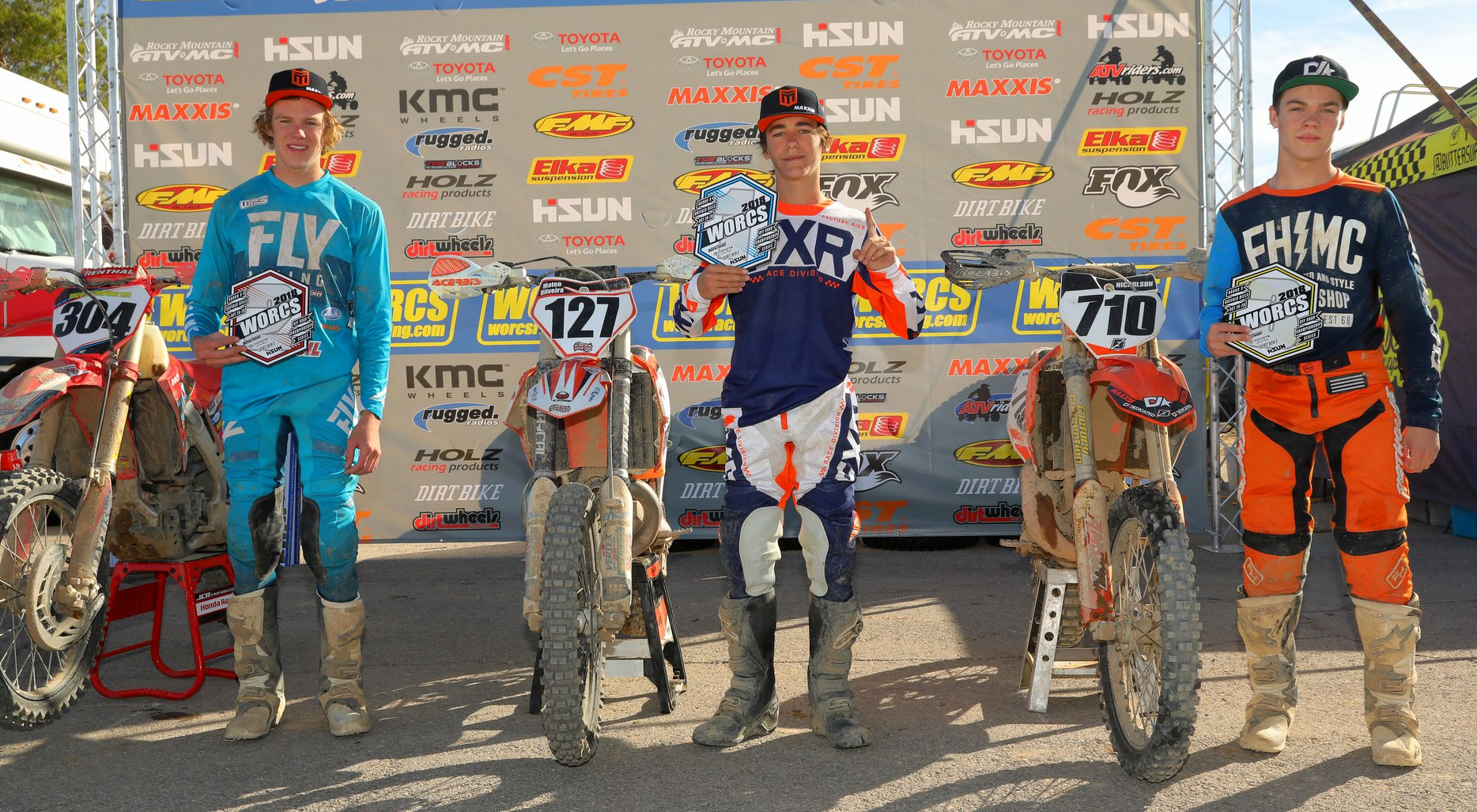 “I tried to just take smooth lines and stay on the small chop,” said Oliveira. “I just kept my Maxxis Tires to the floor. The rough conditions suited my style.” 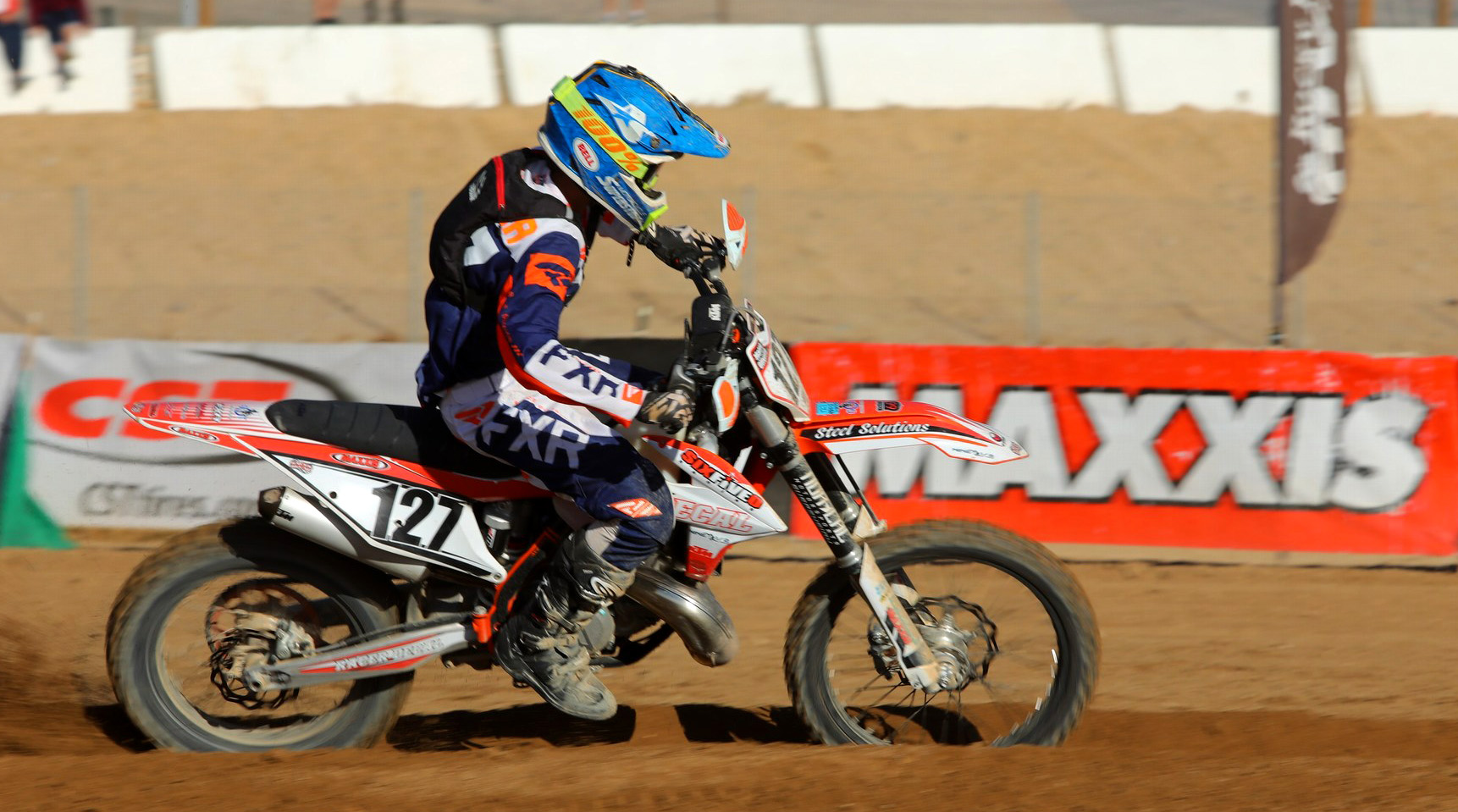 Wilton won two races this season and scored three additional podiums. Riding a KTM, Wilton rode super conservatively to protect his championship and came out atop the points at the end. Wilton races out of Calgary, Alberta. 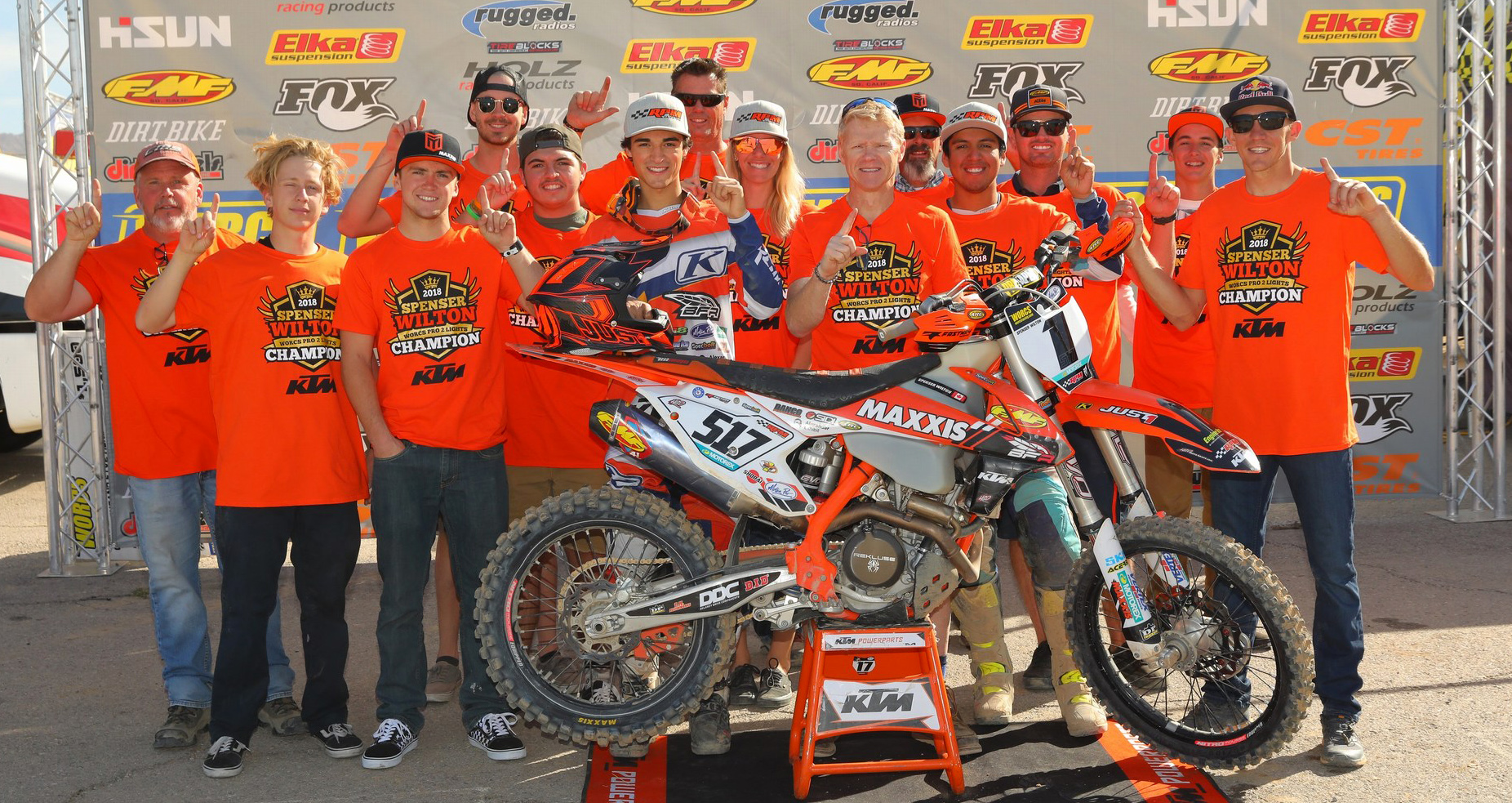 “I still have one more endurocross race, so I wanted to play it safe and wrap up the championship,” said Wilton. “This is my first American championship being from Canada.”

The motorcycle classes will compete on moto-only weekends next season with a $10,000 Pro purse. The series kicks off January 11-13 at Buffalo Bill’s Resort and Casino in Primm, NV.