Posted on January 22, 2012 by Podium Promotions Leave a comment 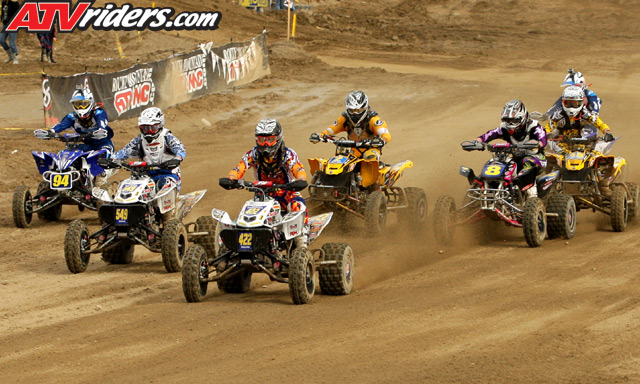 Devore, CA – WORCS ATV racers were greeted to rain and mud for the start of the 2012 racing season opener at Glen Helen MX. After heavy rain fell on Saturday morning, which forced a track re-route and cancelled Pro ATV practice, the sun finally came out on Sunday for an exciting Pro & Pro-Am ATV race.

Maxxis / H&M Motorsport’s Beau Baron kicked the season with a win by edging out Motoworks / Can-Am’s Josh Frederick after an intense race to the checkered flag. H&M motorsport’s David Haasgsma joined his teammate on the Podium in third, which was a WORCS Pro ATV career first for Haagsma.

When the gate dropped, Sparks Racing’s David Haagsma grabbed the ATVriders.com Holeshot Award and held the lead for the first lap of the race.

The WORCS-X section proved to be extremely challenging, but Maxxis’ Beau Baron was up to the challenge as he charged his way into the lead when Haagsma found himself hung up on the tires at the beginning of lap two. Baron would go through the WORCS-X section again in lap three without any issues, which would extend his lead to over 20 seconds early in the race.

Motoworks / Can-Am’s Josh Frederick would eventually chase down and pass Baron, but late in the race, Baron would once again regain the lead with Frederick’s in chase to the checkered flag.  Baron would hold off Frederick to claim the pro win by a slim margin.

David Haagsma battled his way back up into the third spot in the final laps of the race, which secured Haagsma his first Pro ATV Podium finish

DWT’s Dillon Zimmerman was in the hunt for a Podium finish as he went back and forth with Haagsma throughout the race, but in the end, Zimmerman would finish in the fourth spot.