Cedar City, UT –  Taylor Robert returned to the Rocky Mountain ATV MC WORCS Series present by Maxxis and Dirt Bike and picked up where he left off by dominating the Pro Motorcycle race at Iron Mine Race Park. Eric Yorba claimed the second spot on the podium followed by points leader, Gary Sutherlin. 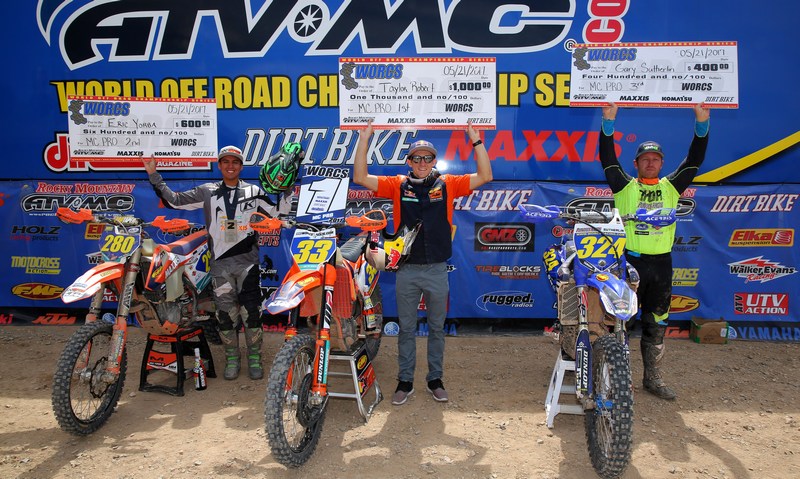 The race featured beautiful conditions with temperatures in the mid 60s and a slight breeze. Despite track officials’ best efforts watering the track, the back sections were dusty especially on the single track through junipers and sagebrush. Iron Mine is known for its big ski jumps and high speed offroad track. The circuit also featured small endurocross section with logs and tires combined with its top-notch motocross track. There was a huge turnout of spectators and competitors.

Robert returned from serious injuries sustained in the King of the Motos in February. He grabbed the lead at the start and was never challenged, sailing the big jumps and riding literally his own race. Robert won the first two rounds of the season before the injury forced him to miss four rounds while he was recovering. He has won all three of the WORCS races in which he competed this season.“This track is super fast, I got the holeshot and never looked back,” said Robert. “This is my fourth race back on the bike and my first with WORCS. It always feels better to come back to WORCS, especially with a win.” 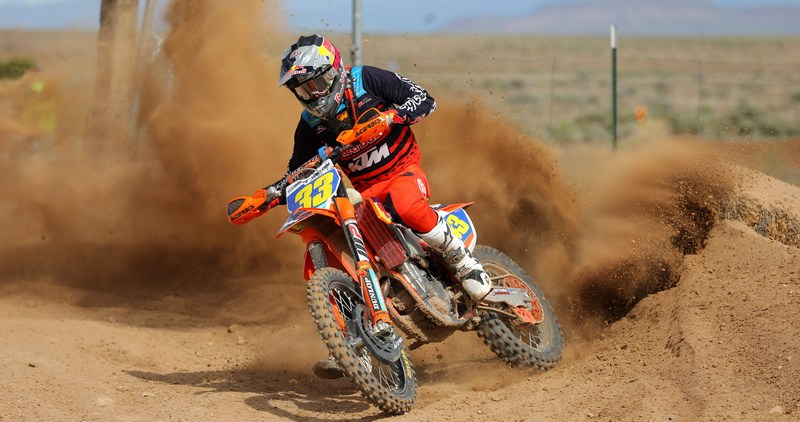 Robert suffered what many thought would be career-ending injuries in the King of the Motos. Despite the setback, he is back dominating WORCS. “It was rough,” explained Robert. “I had 12 inches of my intestine taken out, L2-L3-L4-L5 vertebrae fractures, fractured sacrum, and a torn MCL. There was a lot going on.” 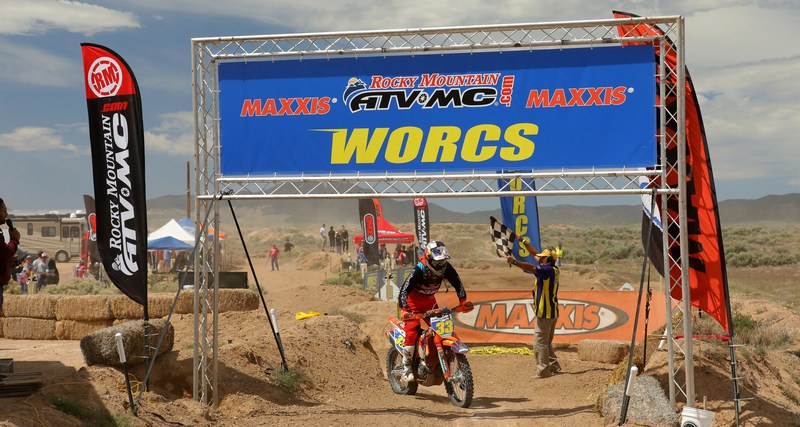 RPM KTM’s Eric Yorba finished second, scoring his first WORCS podium of the season. He took second when a rear brake caliper broke off of Sutherlin’s Yamaha. “I didn’t get the greatest start and that Pro section was super dusty, but I kept plugging away,” said Yorba. “It’s a bummer what happened to Gary’s bike, but I’m happy with the finish. I’m glad to be progressing back to where I was before my back injury. I had a good battle with Justin Seeds, Robby and Gary. It was a fun race.”

Sutherlin rode the last few laps with no rear brakes, but held on for third. Sutherlin continues to hold the points lead, ahead of Justin Seeds and Robby Bell, who finished sixth on his Kawasaki. “I got around Robby, put the hammer down and gapped those guys,” said Sutherlin. “I stayed with Taylor for a few laps, and pitted. Once I left the pits, I noticed a noise in the back end and my caliper fell off. So I had to ride the last three laps with no rear brakes. I really salvaged a podium today. It’s been rough this year. I just can’t catch a break, but we’ll be good for Glen Helen.”

Seeds finished fourth. His win in the last race combined with consistency all season places him 17 points out of the championship lead. “I had some issues with some trees in the Pro section and I just couldn’t find my groove,” said Seeds. “I actually fell back to eighth at one point and then I pitted. From there, I decided to see what I could salvage from this. I’ll take a fourth; I only lose two points in the championship behind Gary. I will keep focusing on the championship and hopefully we’ll get another win.”

Bell is still recovering from an injury he suffered in a crash during a Big Six event at 29 Palms last month. Bell’s back tightened up early in the race and he had trouble gaining traction on the track’s sandy racing surface. He’s happy to still be in the points chase. “My back has been really tight,” said Bell. “I can ride through it a little, but I had to sit down here to get traction. It’s a bit of bummer, but I’m stoked I can ride and I’m still in the points. Hopefully, the back will get a little better going into Glen Helen and at least be in the back of Gary’s head.”

In Pro 2, Dante Oliveira was on a whole other level than the rest of the field. He was launching all of the jumps, rode his own race and took his third consecutive victory. Combined with another win in round three and three runner-up finishes, Oliveira has an impressive 31-point lead in the title chase. Kyle Mercier finished second, followed by Alex Dorsey. All three were riding KTMs. 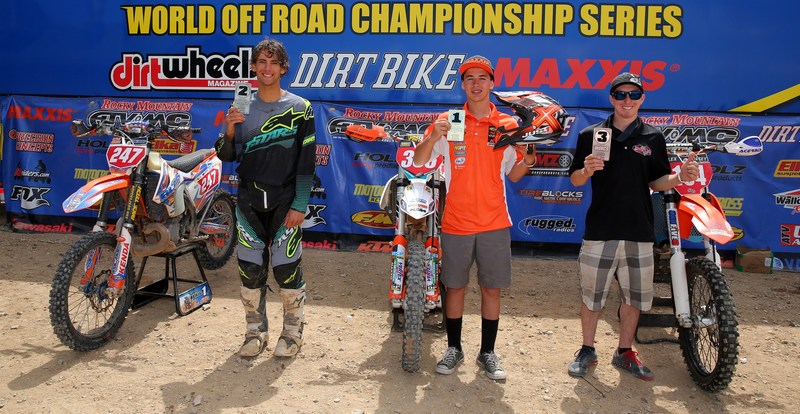 “The ski jumps were a little sketchy, but it was so fun,” said Oliveira. “I felt great and my bike worked awesome. I got the holeshot and pulled ahead every lap. The single track section was dusty and whooped out, but it was fun.” 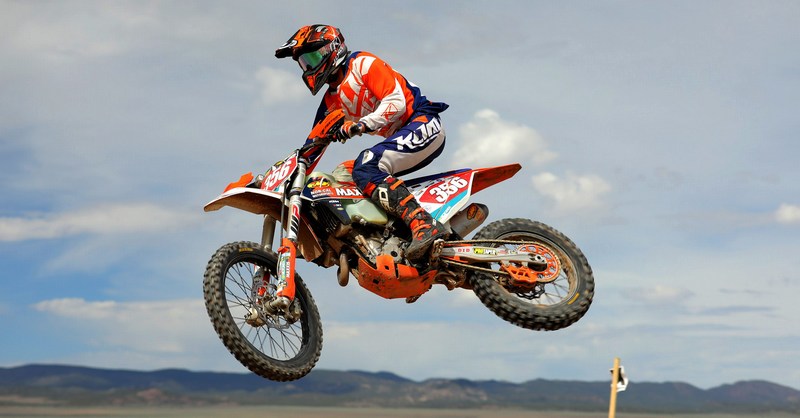 In Pro 2 Lights, Clay Hengeveld and Austin Serpa battled for most of the race before Hengeveld came home with the victory. Hengeveld has been in contention for the victory several times this season before issues took him out of the running. It marked the Kawasaki rider’s second victory this season and he leads the points by 12 ahead of Cooper Abbott. Serpa was second on a KTM, followed by Collin Elliott on a Yamaha. 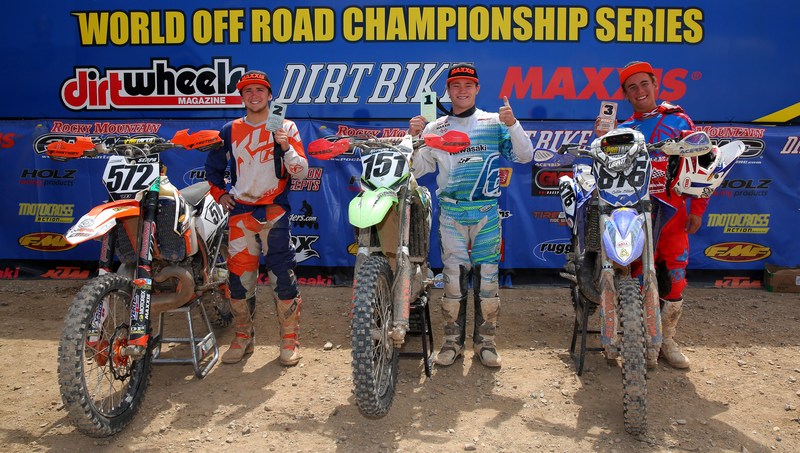 “I got a third-place start, I caught Serpa, I passed him out on the fast roads and took the win,” said Hengeveld. “It feels so good to pull this off again. I really like the track. It was rough, but the moto section was fun. I really enjoyed the race today.” 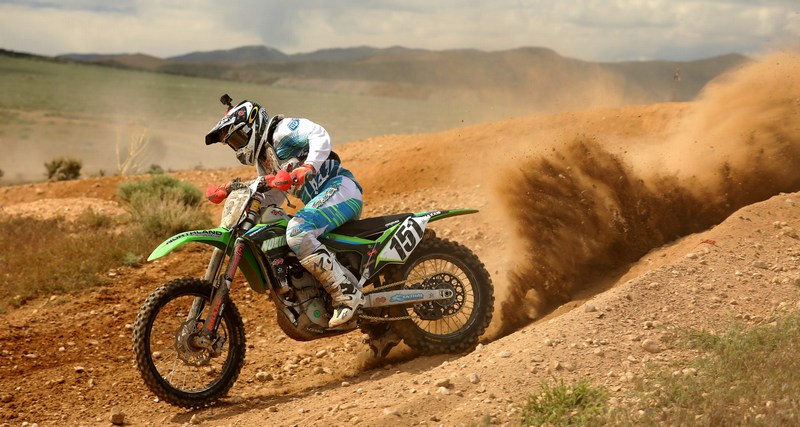 The WORCS motorcycle racers will trade the cool Utah temperatures for the often-hot Glen Helen sun when the series heads to Devore, CA track on Father’s Day weekend, June 16-18.