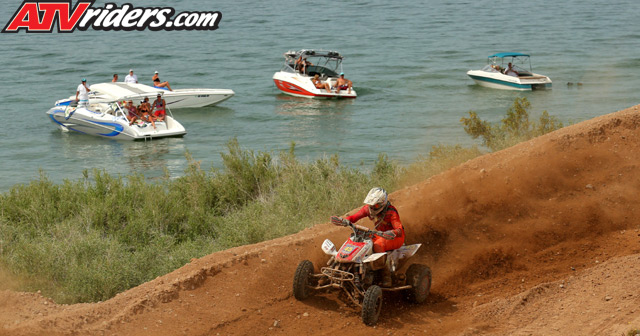 The start was a typical dead engine start, with Robbie Mitchell grabbing the holeshot, but he was followed closely by David Haagsma and a fierce battle began. Haagsma kept charging and soon made the pass on Mitchell, and once out front, Haagsma held the lead all the way to the checkered flag for his first win of the year.

Robbie Mitchell, who was recently married on March 7th, was looking fast and strong for this round, as he charged off the start and grabbed the holeshot. Mitchell held off Haagsma for a little while longer before Haagsma got by. Despite falling back to second, Mitchell stayed close and claimed a solid second place finish.

Garrin Fuller put in a strong effort and earned his first ever Pro podium finish. Fuller battled with Mitchell and Haagsma for the first three laps, but he was unable to gain in ground on the front two, but Fuller held on to claim the final spot on the podium.

Points leader and defending Pro ATV champion, Maxxis/H&M Motorsports’ Beau Baron suffered a nasty crash during Friday practice and injured his shoulder. Determined not to lose his points lead, Baron rode one-handed for Sunday’s Pro ATV race and amazingly finished in the fourth spot.  Baron is unsure if he will be able to compete at Sand Hollow in just three weeks, but plans to keep everyone posted on the extent of his injury.

Pro Motorsports’ Jeff Hancock, who didn’t get a chance to practice, was a little unsure when he came to the lagoon jump so he gave it his all and flat landed the jump and jammed his wrist in the process. Despite the tough conditions and taking the long way around the lagoon, Hancock rounded out the top five in the Pro class.

In the Pro-am class, Mike Sloan continued to dominate, clinching his fourth straight win of the season. Sloan shot of the start and grabbed the holeshot. Sloan increased his lead with every lap and held the lead from start to finish.

Lonestar/JRi’s David Flores had a good race despite the tough conditions. Flores was in mid-pack but charged his way through traffic and clinched a second place finish.

Joseph Shafe, who is nearly twice the age of the rest of the Pro-am field, came on strong and battled it out to claim the final spot on the Pro-am podium.

Alex Ortiz was having a good race and had worked his way up to second place, but late in the race he broke a spindle and fell back for a tenth place finish

Round five of the 2015 Rocky Mountain MC World Off-Road Championship Series presented by Maxxis and Dirt Wheels will head to Sand Hollow in Hurricane, UT on April 17-19th