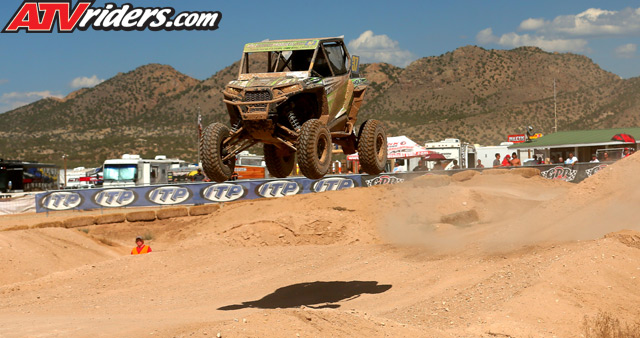 Round six of the 2014 WORCS series was forced to acquire a new venue after the recent closure of Pala MX in Southern California.  Thankfully Iron Mine Raceway in Cedar City, UT provided a perfect location with relative cool temperatures and plenty of racing action.  Racers were greeted with sunny skies and temps in the low 90’s, as Saturdays racing got underway. The sunny sky and a slight breeze provided dry track conditions and visibility was low, despite the best efforts of the WORCS crew.  Once again over 50 SxS’s were on hand to check out the new venue.

WORCS Pro SXS Racer Ryan Piplic started on the front row, and after dramatic battle for the lead between Piplic and Beau Baron for the lead in the  first few turns, Piplic was able to power his Cognito / Polaris into the lead by the third turn, and make the pass stick. Once out front, Piplic took advantage of a clear track and distanced himself from the rest of the pack claiming his first WORCS Pro SxS victory of the season, which moved him past Jeff Obering into fourth place in the SxS Pro championship points race.

Sparks / Holz Racing’s Beau Baron grabbed the holeshot, and after a short battle back and forth battle with Piplic in the first couple of turns, Baron dropped back into the second place. Baron attempted to challenge Piplic for the lead, Baron experienced steering issues in the second lap, which slowed his charge as he focused on finishing the race in the second spot. Baron’s second place finish allowed him to extend his points lead to 17 points over Mitch Guthrie jr in the second spot in the points race.

Loan Mart’s RJ Anderson was in third place off the start when low visibility forced him to a complete stop on lap one at one point.  This brief stop gave Piplic and Baron some breathing room out front, which Anderson was unable to make up. Anderson crossed the finish in third place behind Ryan Piplic and Beau Baron for his fourth podium finish of the season.

Pro SxS Rookie Mitch Guthrie Jr. had a strong showing finishing in the number four spot, which keeps him within striking distance of Baron in the points lead in the final rounds of the season.

Rounding out the top five in the WORCS Pro SxS class was Kolob Air Racing’s Jeff Obering.  Aside from being a Cedar City, Utah resident, Obering is also partially responsible for helping bring the WORCS race to Iron Mine Raceway for round six, and Obering consistent finishes continued at Iron Mine with him finishing in fifth place, which currently has him fifth in the points race, and he is the only driver inside the top ten to finish every round this season.

In the SxS 1000 Class, Matt Hancock grabbed the holeshot and lead most of the race before his car overheated on the final lap.  David Haagsma was able to keep pressure on Hancock throughout the main event in order to capitalize on Hancock’s RZR overheating in the final lap of the race to claim the victory in the SxS 1000 class as the pair went an extra lap in the battle for the win over the rest of the class.  Haagsma’s win moved him within 8 points of the class lead.

Matt Hancock edged out David Haagsma for the SxS 1000 holeshot before leading almost the entire race.  Hancock took advantage of clean air and put down one solid lap after another before experiencing an overheating issue on the final lap.  With Hancock’s car overheating and in “limp mode”, Haagsma was able to make the pass for the win, forcing Hancock into the number two position where he finished.

Round five winner and SXS 1000 class points leader, Mike Gardner finished in the third spot to maintain the points lead, but with three rounds remaining, it is still a tight battle among the top three.

In the 850 Class, Jim Berry got out to an early lead by grabbing the Holeshot in his Kawasaki Teryx 850 with Danny Rosenzweig in the second. Early on  Rosenzweig, struggled to make up time on Berry, but in the in the final laps, he increased his pace and began to close the gap finishing only 7 seconds behind Berry at the checkered flag. It was a big win for Berry who currently holds the points lead, and his win extended his points lead to five points over Rosenzweig without counting the one throw away race.

The battle for the championship Rosenzweig and Berry remains tights, so the final three rounds should be exciting with these two battling for the SxS 850 class championship.

The 2014 WORCS series will head to northern most round, in just three short weeks. Round seven will be held August 1-3 at the infamous Straddleline ORV  in McCleary, WA.  The points battles in all the WORCS SxS classes are still tight, so the final three round of the season will make for some exciting racing action, as racers battle for the 2014 WORCS Championship. Also, check out www.atvriders.com  for all your SxS news.