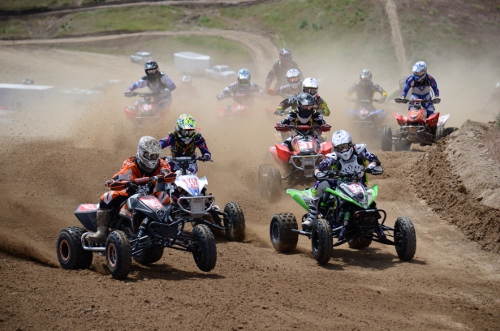 Garrin Fuller, who came back from injury to win WORCS ATV Pro-Am round 4 in Anza, proved it was no fluke by turning in a dominating performance at round 5 at the Clay Peaks facility in Payette, Idaho. Fuller came off the line just outside the top five and immediately started working his way forward. Knowing dust would be a factor, Fuller wanted to get into the lead group as quickly as possible and hoped to ride in clean air for as much of the 1 ½ hours of the race as he could.

A few mishaps for other racers and his own speed found Fuller taking over the lead quickly. He used the clear track and clean air to cut some of the fastest Pro-Am lap times of the race and build an early gap, which he held until the checkered flag.  Behind Fuller Keith Johnson was cutting some fast laps of his own, as he made his way to 2nd place, for his best finish so far this season. Cody Mitch scored 3rd for the day, for his 4th podium of the season. Blane Vadasy took the 4th place spot and Chase Thomas rounded out the top five. The WORCS Pro-Am Championship points leader, Collins Webster, had an off day finishing 10th on the tough Idaho course.

“The race started off well,” said Fuller. “I think I was 6th or 7th off the line, then the guys in 3-4-5 all got stuck together in a turn so I was able to get around them pretty easily. I was a little worried about the dust in the high speed stuff so I was happy for any easy pass. I made it into 1st place and then rode my own race. I wanted to get a good gap and then be able to relax at a fast pace. The course was fun, there were a lot of really fast tough sections, and a lot of touch technical sections, like the WORCS-Cross. So my hands got beat up pretty good. But it’s all good when you win. I’m really looking forward to the next race.”

With 5 races done and 4 still to go the WORCS Pro-Am Championship is still a tight race. Webster leads with 105/2 wins, over Mitchell with 97, and Johnson with 91. Javier Robles Jr is 4th in the title chase with 87/1 win, and Fuller is starting to make up ground with 76/2 wins.