Posted on October 17, 2010 by Podium Promotions Leave a comment 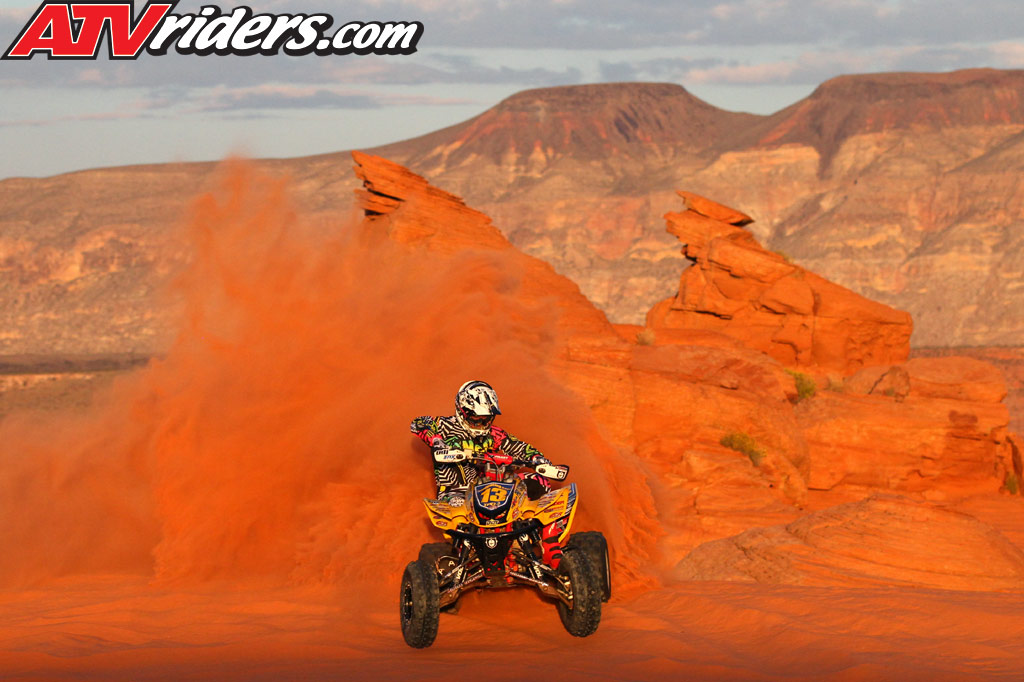 Mesquite, Nevada – After a very tough round eight, Can-Am/Motoworks’ Josh Frederick knew he had his work cut out for him at the final round of the 2010 WORCS series in Mesquite, as MCR/Maxxis Tire’s Beau Baron had the Pro points lead. Frederick also knew that he would need a little luck in order to win the 2010 WORCS Pro ATV Championship.As fate would have it, heartbreak was in store for Beau Baron as mechanical issues put him back by two laps, while luck was on Josh Frederick’s side, as he charged his way to a first place finish, reclaiming the WORCS Pro ATV Championship.

Mesquite MX Park, in Mesquite, Nevada was the hosting facility for the final round of the 2010 WORCS series where good weather and good track conditions were on hand for Sunday’s events. Tensions were high as the Pro ATV Championship was on the line and only a few points separated MCR Maxxis Tire’s Beau Baron and Can-Am/Motoworks’ Josh Frederick, with Baron in the points lead. If Baron was to win his second consecutive championship, he would only need to finish within the top five, but there was still a chance for Frederick to take the championship, if he were to win and if Baron finished outside the top five.

As the Pro class charged off the line, Josh Frederick was in a solid third place behind teammate Jeremie Warnia and Yamaha’s Dustin Nelson. Frederick looked strong and fast as he overtook Nelson in lap three taking second place. From there, Frederick began to chase down Warnia who had a significant lead on the rest of the pack, but Frederick kept on the gas and in lap six, Frederick closed the gap and was able to take over the lead in lap seven.

Once out front, Frederick checked out and took the Pro ATV win and also reclaimed the 2010 WORCS Pro ATV Championship after a Baron would suffer mechanical issues. “I knew I had to win and I knew I also needed a little luck to get the championship. I just gave it my all and I am really stoked to be able to bring the championship back to the Can-Am/Motoworks team,” stated Frederick of his third WORCS Pro Championship.

Can-Am/Motoworks’ Jeremie Warnia was in attendance for the final round of the 2010 WORCS season and was looking incredibly fast as he grabbed the holeshot and took a huge lead. In lap two, Warnia laid down the fastest lap time of the race with a time of 08:12.618, which was eight seconds faster than anyone else on the track.

Warnia led for six laps before he would fall back to the number two spot, where he would stay until reaching the checkered flag. “I had a good time today and I am happy for Josh winning the championship!” said Warnia.

Yamaha’s Dustin Nelson was looking good as he charged off the start in second place. Nelson looked smooth and consistent as he was able to hold off a hard charge from Josh Frederick for two laps before falling back to third. Nelson rode the rest of the race unchallenged and held the number three spot for twelve laps before reaching the finish line and claiming the final spot on the Pro podium. After some bad luck earlier in the season, Nelson’s strong performance and determination, put him in fourth place in the Pro points chase.

MCR/Maxxis Tire’s Josh Row ran another strong and consistent race as he came off the line and took the number five spot going into the first lap. In the second lap, Row would get by teammate Beau Baron and take over fourth place.

Row held his position and took it all the way to the finish line to end his day in fourth place. Row, who was in a points battle with Dustin Nelson, came out on top as his consistency throughout the season allowed him to take third overall in the Pro points championship.

MCR/Maxxis Tire’s David Haagsma, who wrapped up the Pro-am Championship back in round seven, gave the Pro class another shot after a disappointing debut at round eight where the intense heat got the best of him. At the final round however, Haagsma rode a solid race.

The rookie pro started off in sixth place and had dropped back to eighth at one point, but he was determined to make it known he has what it takes and worked his way back into fifth place after battling it out with Can-Am/Motoworks’ Dillon Zimmerman, and would round out the top five as he reached the checkered flag.

Can-Am/Motoworks’ Dillon Zimmerman had some issues off the start and was in last place at the end of the first lap, but Zimmerman put the hammer down and quickly mounted a charge. Zimmerman battled his way up to fifth place, but then came under attack from David Haagsma, and dropped back to sixth place, where he stayed as he reached the checkered flag. Zimmerman has had a great year and has ended his rookie pro season in fifth in the points chase. “My goal was to get into the top five and I accomplished that, so next season I’ll be trying for the top three,” said Zimmerman.Robbie Mitchell ran a solid race as he came off the start in mid-pack and worked his way into the number seven spot before crossing the finish line. Although Mitchell encountered issues in rounds seven and eight, his consistent performance throughout the season enabled him to finish the year in eight place, in the points standings.

It was a heartbreaking race for MCR/Maxxis Tire’s Beau Baron. The 2009 champ was in the points lead going into the final round and only needed to finish in the top five to secure his second consecutive championship, which should have been an easy task, since he had not finished outside of the top four all season, but as luck would have it, Baron’s axle bearings would go out shortly into the race. Baron stopped and the MCR/Maxxis team fixed the issue, but at that point, Baron was at a two lap deficit and despite his best efforts, he could only muster an eighth place finish, which would put him in second place in the points championship, only two points behind Josh Frederick.

“The first lap out, my brakes went out and then my rotor overheated so much that it caused my bearing carrier to melt down; then to top it off, I ended up flipping the quad before I got to the pits. We were able to swap out the rear end, but it took too long and I was two laps down and just couldn’t make up the time. I am disappointed because I have worked really hard this year and I wanted to hang on to the championship, but that’s racing,” said a disheartened Baron.