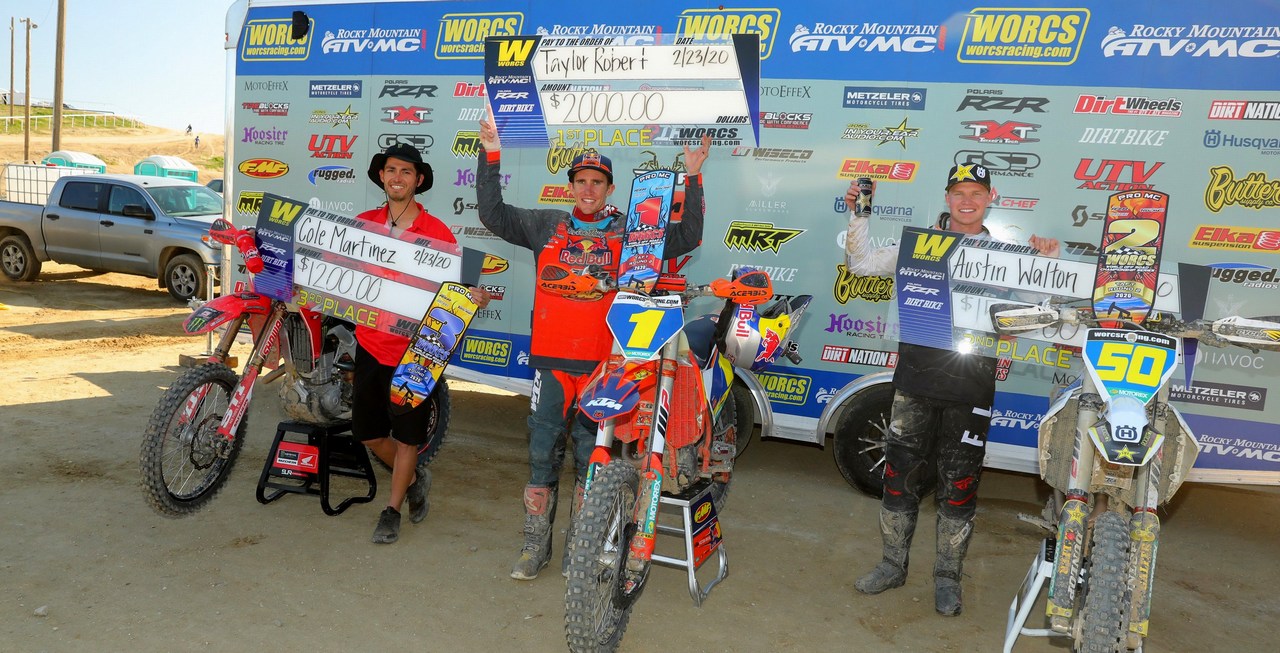 The race weekend was held at the combined off road and motocross track in the San Joaquin Valley. The track was extremely technical and passing was a premium. Being early in the season, many races were decided by the rider’s level of fitness especially with the Pro races being scheduled for two hours.

Dante Oliveira took the lead from the start of the Pro race with Robert in tow. Showing his continued growth as a racer and his hard work over the offseason, Oliveira was putting in an excellent ride on his KTM before he crashed hard. After stopping to ensure Oliveira was OK, Robert took the lead on his KTM and held it from there. Oliveira finished ninth and completed 11 of the 12 laps.

“Dante found a lot of speed in the offseason and he’s riding really well,” said Robert. “I was bummed he had a big get-off like that. The track was just brutal today. It was very square edged and rough. I’m glad to have this one over with because I like these next two races a lot better than these last two. To go in with a couple of wins and healthy is something I’m looking forward to.”

Rockstar Husqvarna rider Walton followed Martinez in the early stages of the race. He rode a consistent pace that was just a bit faster than Martinez. After taking second, he didn’t look back.

“I knew I had my work cut out for me if I wanted to catch him, so I just hammered down and I caught him a little bit at a time,” said Walton. “He gave me another run at the end, but I was happy to finish second. Everyone is fast in this class and there is no cruising if you want to do well.” 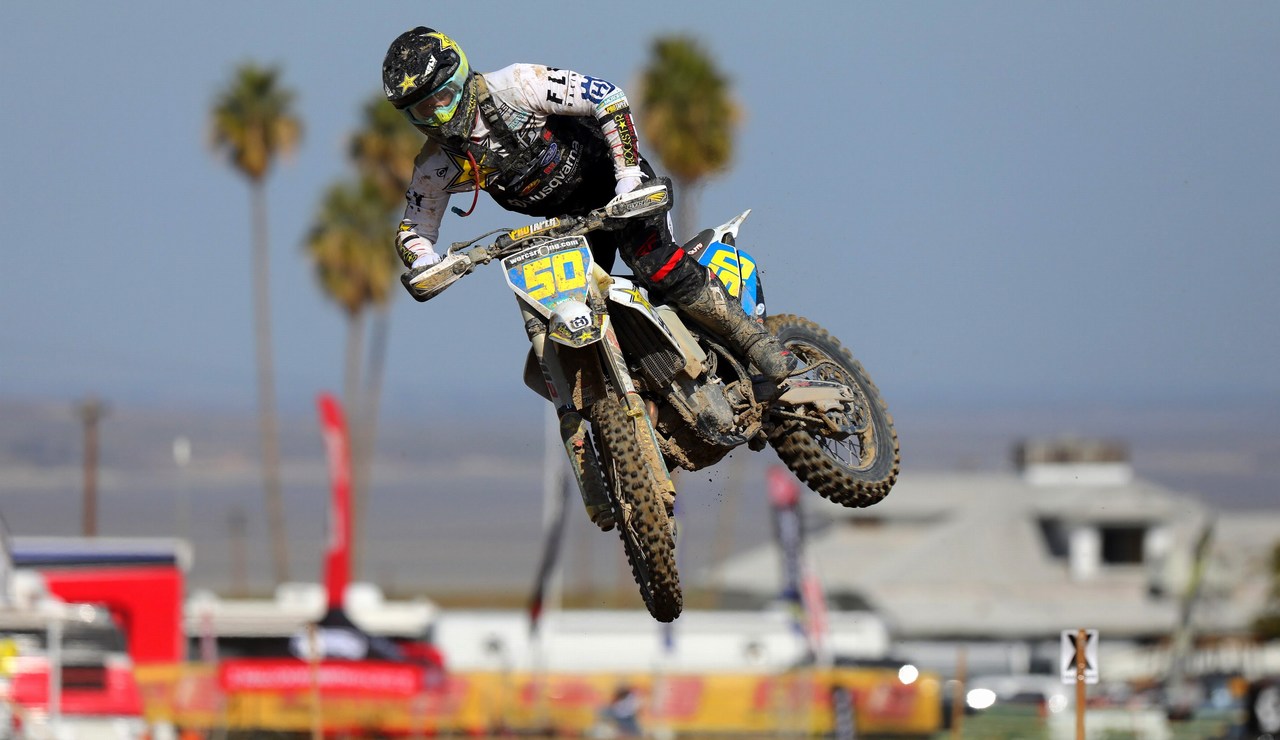 Martinez hung in behind the leaders on his SLR Racing Honda, keeping them in sight early but serious arm pump with four laps left put him third at the finish earning him his first WORCS podium. 2020 marks his first season in WORCS competition and represented the motocross and Supercross rider’s first season in off road racing in a decade. “Honestly, I was just trying to keep Dante and Taylor within 30 seconds because I’ve been able to charge at the end of races,” said Martinez. “Then I saw Dante have a big get-off and I almost crashed in the same place the lap before. I just tried to run a smooth solid race.” 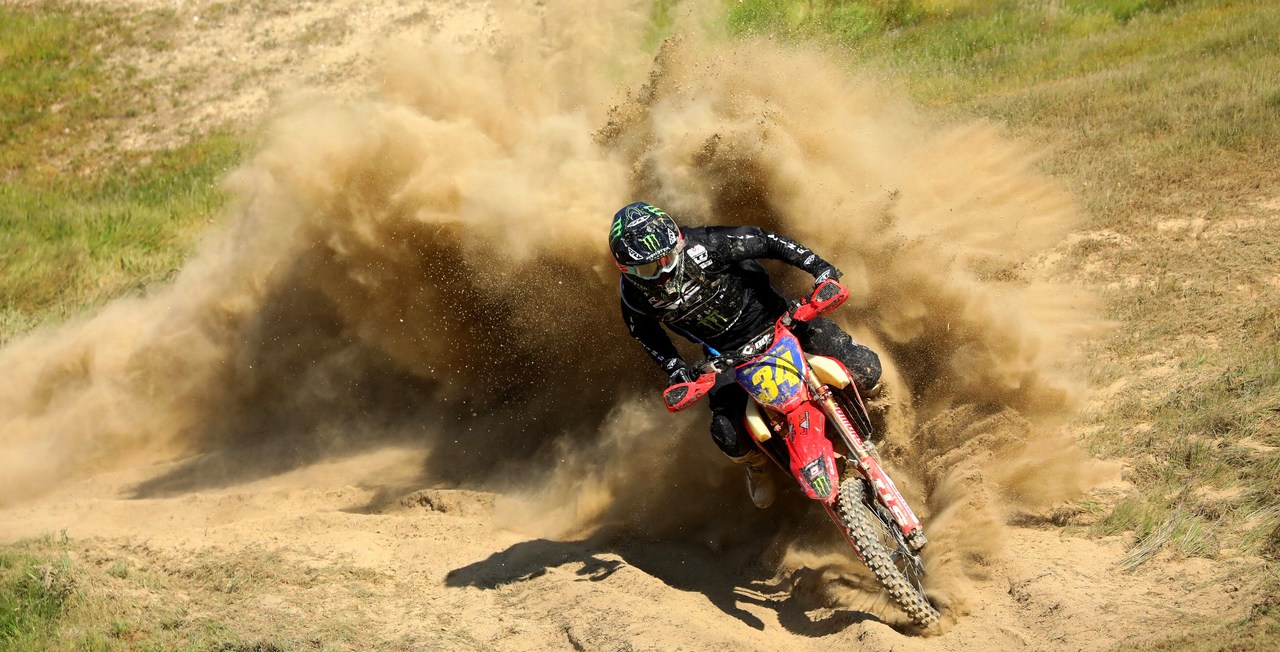 In Pro 2, Tallon Lafountaine scored his first victory of the season in a class that is likely to be one of the most competitive this season. Riding a Honda, Lafountaine beat out Mason Ottersberg on a Yamaha and Mateo Oliveira on a KTM. Lafountaine followed Mateo Oliveira for the first half of the race before taking the lead. Patience turned into his ally during the tough race.

“I just followed him and learned the track for the first hour and was patient to get the whole two hours in,” said Lafountaine. “I didn’t finish a few races last year, so this is a step in the right direction. The roost hurt really badly so early on I couldn’t stay that close to him. I gave him a little room and waited until I caught him in the right spot.”

With Oliveira running out of energy, Ottersberg passed him and then set sail for Lafountaine. Unfortunately, he ran out of laps and didn’t have quite enough to snag the top spot, settling for second at the finish. “I was so close to catching Tallon…I just didn’t have enough time,” said Ottersberg. “I had a terrible start and I had to play catch up throughout the race. I really had to choose my lines and it was very technical.”

Mateo Oliveira kicked off the race with a quick start and a holeshot. He may have run took quick a pace during the first hour because fatigue set in quickly during the second hour, and he fell back before taking the final spot on the podium. “I started falling off of the pace when my arms got tired,” admitted Oliveira. “I’m happy to be back on the podium with good points. We’ll keep working hard and we’ll be where we need to be.”

In Pro 2 Lights, Tyler Lynn notched his second consecutive victory of the season. Riding a Honda, Lynn beat out Angus Riordan (KTM) and Mason Matthies (Yamaha). Lynn had trouble at the start and spun off the line, but he quickly made it back up to fourth on the first lap. At the halfway point he took the lead from Riordan and never looked back. 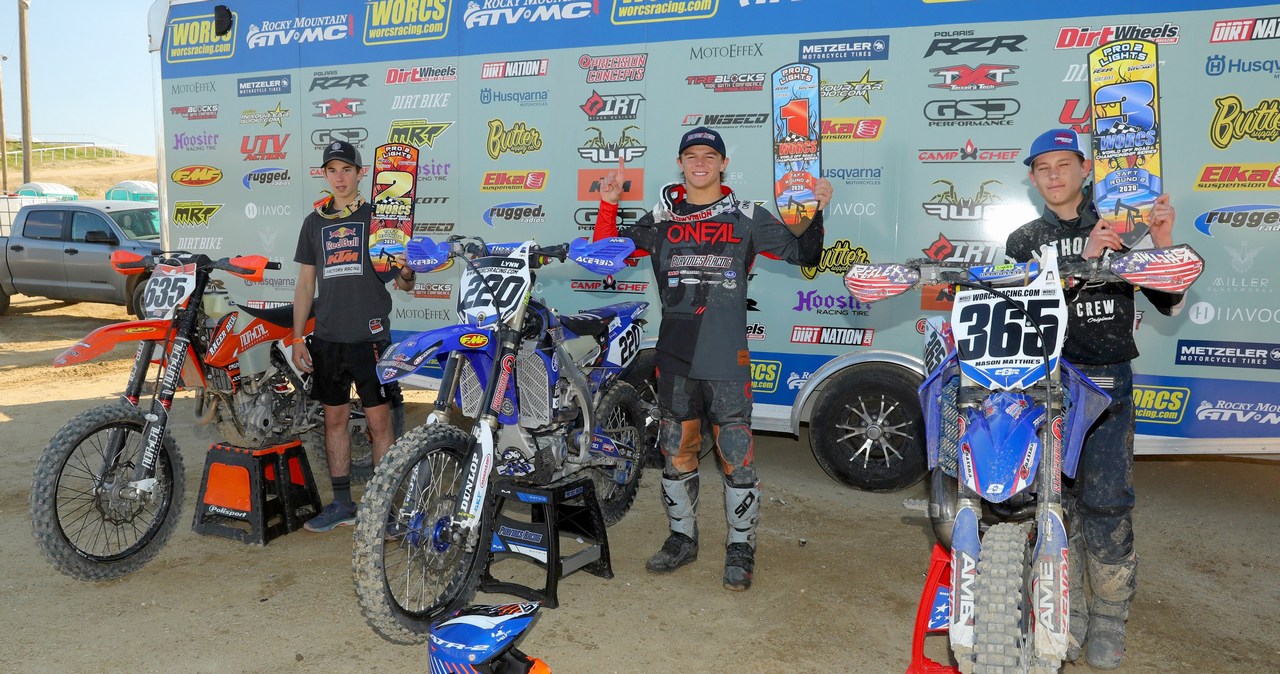 “I just started picking people off and tried to stay with Angus,” said Lynn. “He was going quick, but I started pushing hard. I had to put down some quick laps to get the lead. All in all, it was awesome, and I had a lot of fun.” 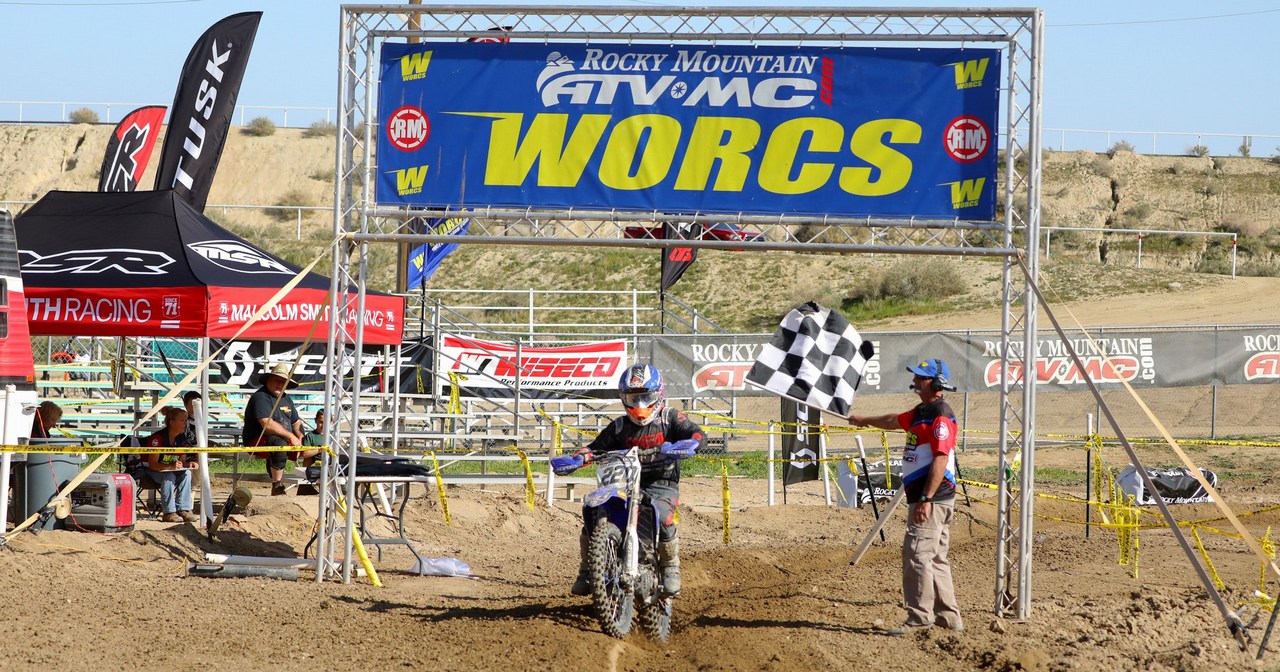 Riordan took the lead at the start and was setting a pace that proved a little too fast in the end. With 40 minutes left, fatigue took its took its toll on Riordan, handing him second at the finish. “Tyler got past me with 40 minutes to go and I just had nothing left,” said Riordan. “This is my favorite type of riding. I like endurocross, but the Grand Prix format is my preferred type.” 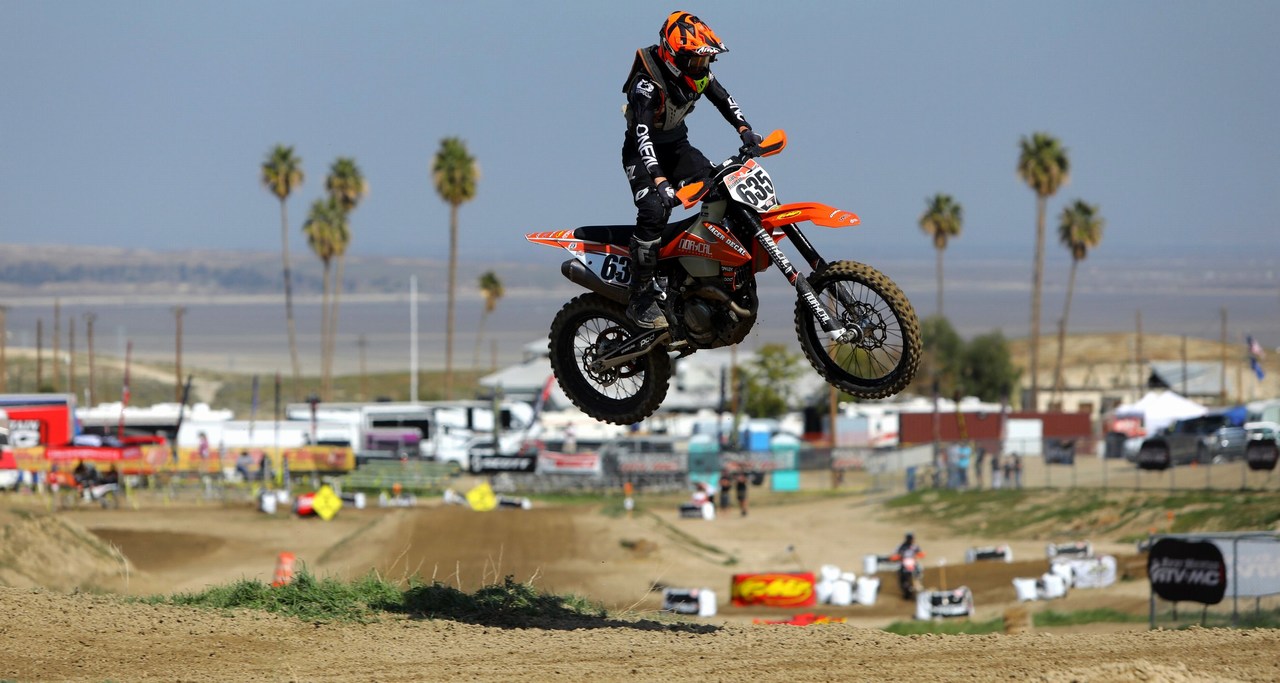 Like Lynn, Matthies was able to turn a disappointing start into a podium. After falling back to dead last at the start, Matthies made it up to third on the first lap and held the position to score his first ever WORCS Pro podium. “I slid off of the start and fell to last,” said Matthies. “I got past everyone on the first lap and made it up to third. This is my first Pro podium and I’m psyched about it.”

In Pro Women, Brandy Richards remained perfect on the season with her second victory. Sharon Mowell was second, ahead of Ava Silverstri. All were riding KTMs. 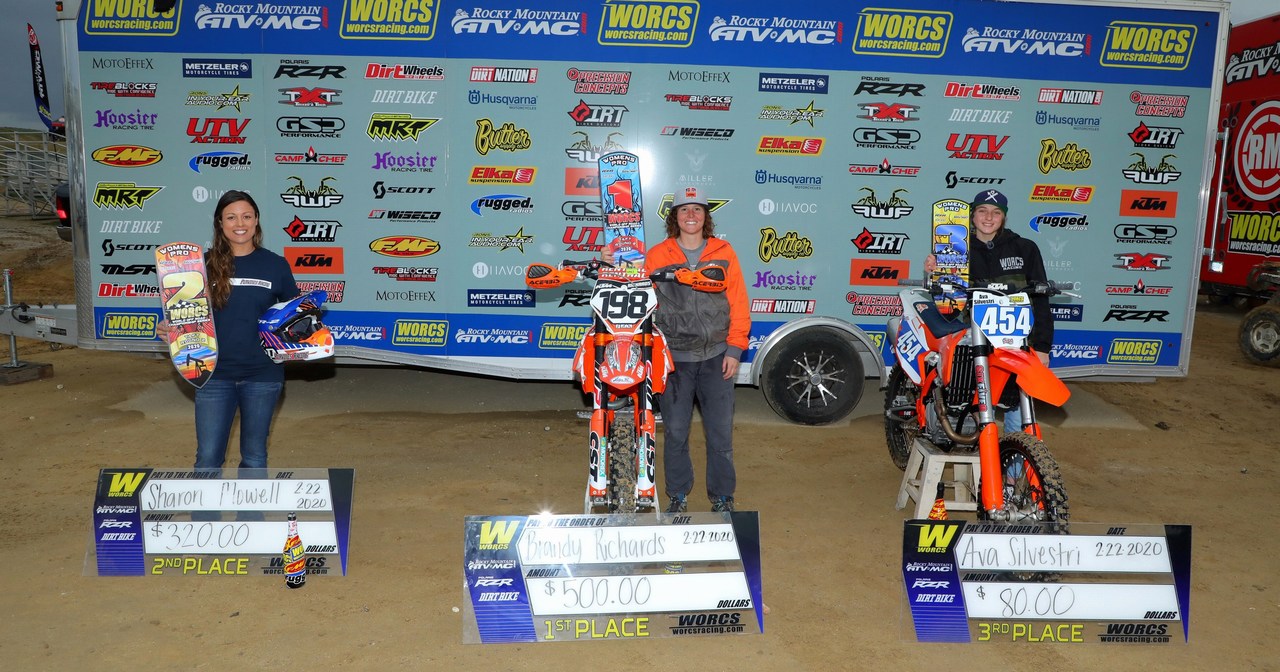 Light rain at the start of the Pro Women race turned into steady precipitation making for an exciting and challenging race. Richards took the lead at the start and then had to thread her way through several A class riders, who had crashed in the slick conditions. “The first lap was a little crazy with the A guys going down in front of us,” said Richards. “I just went around them. By the end of the race we were doing completely different lines. I just got more slippery during the race, so we had get off the main line and out to areas that were drier.”

Mowell said the rain was an equalizer and made for a much more technical track, something she appreciated. She focused on staying upright and that equaled second place at the finish. “Once it rained it evened things out and made it more technical which is where I shine,” said Mowell. “I made sure to stay on the bike and it worked out. I like off road and I live in the mountains where it rains all of the time. I put on extra tear-offs and just went for it.” 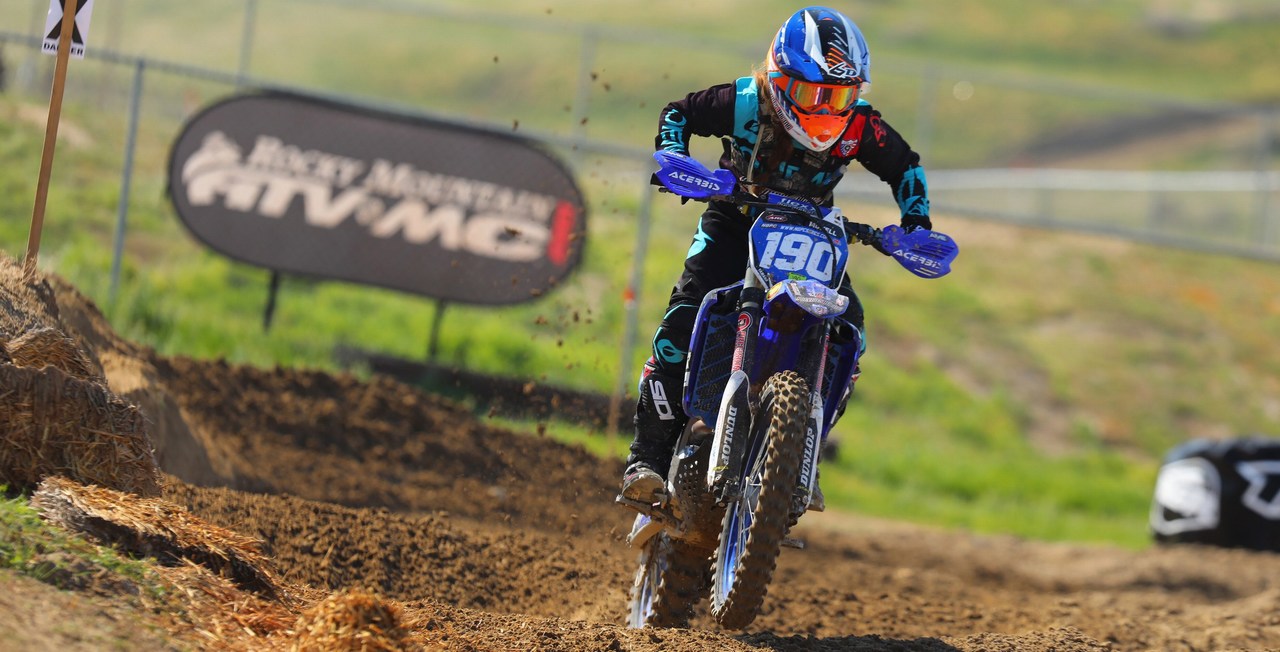 Silvestri enjoyed the off road sections of the course the most. She said the rain made it difficult in the waning minutes of the race and line choice was key to her finishing third. “It was really slick, and the rain didn’t help the conditions on the course,” said Silvestri. “Some of ruts were puddling up so I had to ride outside a lot more. The hills were more fun for me and flowed better.”

The next race for the WORCS motorcycles is a doubleheader being held in Lake Havasu City, AZ March 20-22.