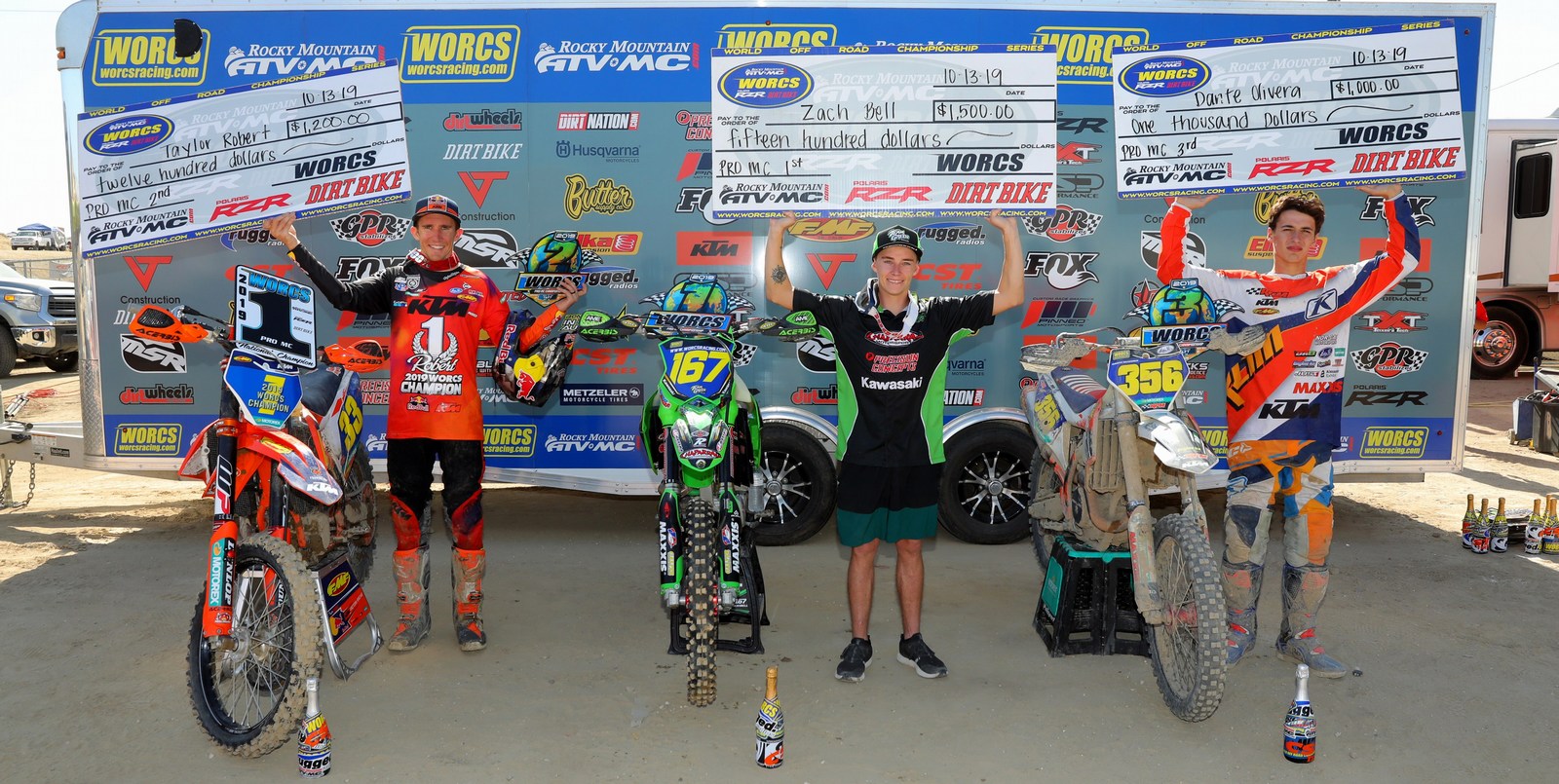 The event was held on the Honolulu Hills’ motocross course, as well as the hills and desert surrounding the circuit. Dry conditions made track preparation difficult and dust was definitely a factor in the racing. So much so that officials wisely closed down the uphill and downhill Pro sections that were becoming troublesome during the Pro events.

Robert snagged the holeshot on his KTM, but Bell collided with Robert within the first mile of the race, which sent to the dirt and Bell into the lead. From there, Bell rode a smooth and steady pace on his Kawasaki to net his first victory of what has been a tumultuous season.

“It was a solid race,” said Bell. “The bike was perfect, and the track shaped up to be a lot better than it was yesterday. I’m feeling really strong and I can’t thank the team enough for supporting me. I’ve always liked this track; it’s really good with my style and that put me in a good lead.”

Robert meanwhile spent several laps trying to get back into his groove. After falling back in the field, he used pit strategy to take second from Oliveira two laps from the finish. “I got off to a great start then out of nowhere Zach just slammed me super hard,” said Robert. “It busted up my elbow and it broke my knee brace. He hit me pretty hard. It took a while to get going after that. I have a lot more things on the line right now, so I rode smart, got into the groove and passed my way back up to second.” 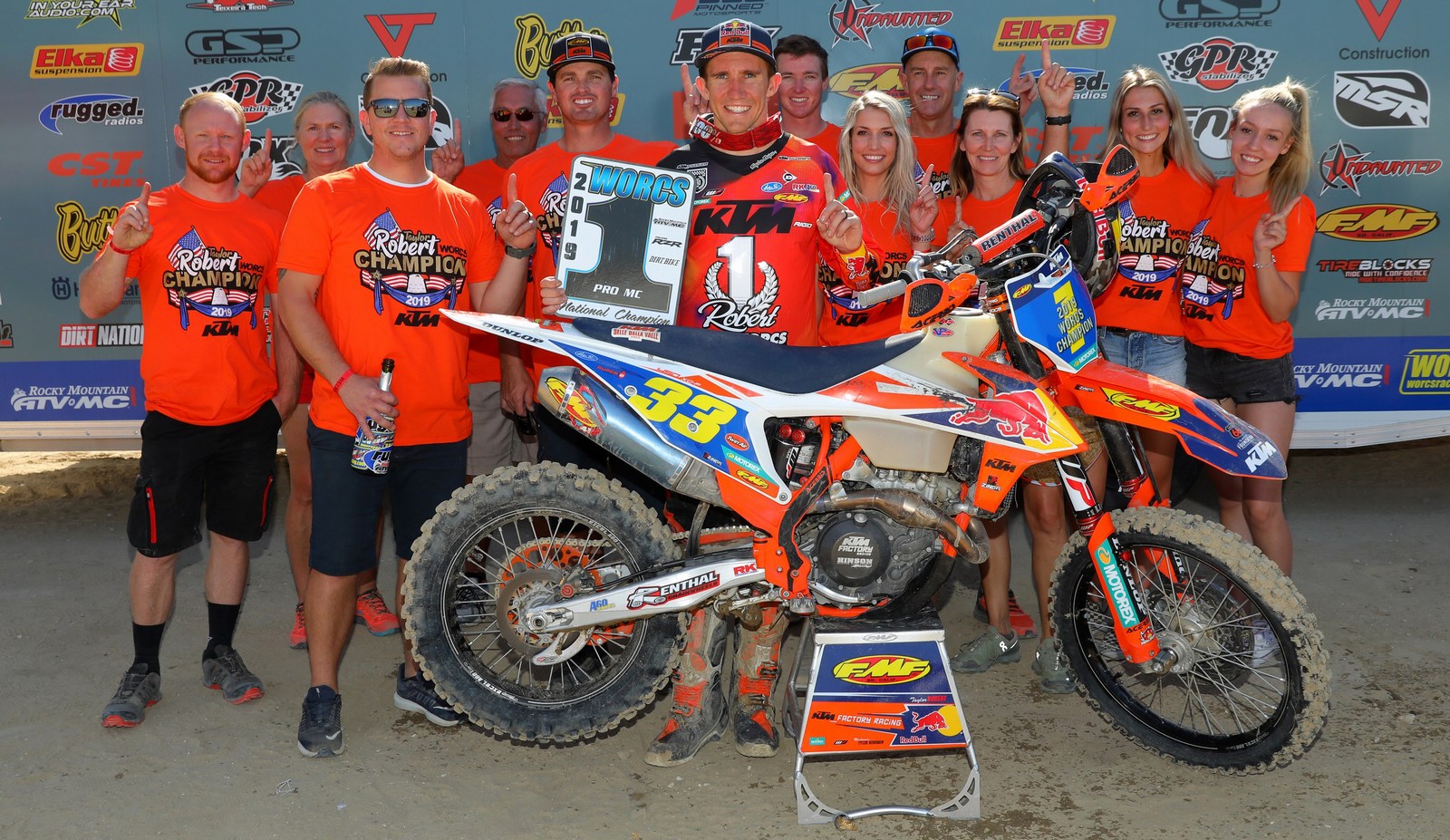 Wisely riding a conservative pace earned Robert the WORCS championship, a mark he has been chasing for the last three years. Robert was dominating the title runs in 2017 and 2018 before injuries took him out of the hunt. This year, he was determined not to get hurt and he made it happen. “It’s been a great year,” said Robert. “This is what I’ve been looking for during the past two years but due to injuries and bad luck I wasn’t able to make it happen. This year, we did what we had to do to get it done.”

Oliveira came out of the first turn in third and then moved to second when Robert crashed. He held a comfortable spot in second for most of the race before falling to third when he pitted. It marked Oliveria’s sixth podium in what has become a breakout season for the Hollister, CA rider. “Taylor went down and I held second all the way until the last two laps when Taylor got around me,” said Oliveira. “The course was brutal. It was super sketchy. There were a bunch of square edges everywhere. It was just about finding a smooth line. The step ups and the jumps were fun; I love the moto track.”

Fresh off getting married, Gary Sutherlin ran a decent race on his KTM, but just missed the box and finished fourth. Sutherlin described a survival mentality during the event that came at the end of what has been one of his more demanding seasons. “It was all around not a fun race,” explained Sutherlin. “I tried to do what I could in the conditions we had. In some spots it was the muddiest race I’ve ever been in. In some spots it was the siltiest race I’d ever been in. It wasn’t what we were looking for, but we came out of here healthy and that’s what we were looking for.”

In Pro 2, Walton won his fourth straight race and unofficially unseated Austin Serpa at the head of the championship points. Walton put in a hard sprint early on his Husqvarna and rode the gap to the finish. Tallon Lafountaine was second, followed by Walton’s teammate Noah Kepple. 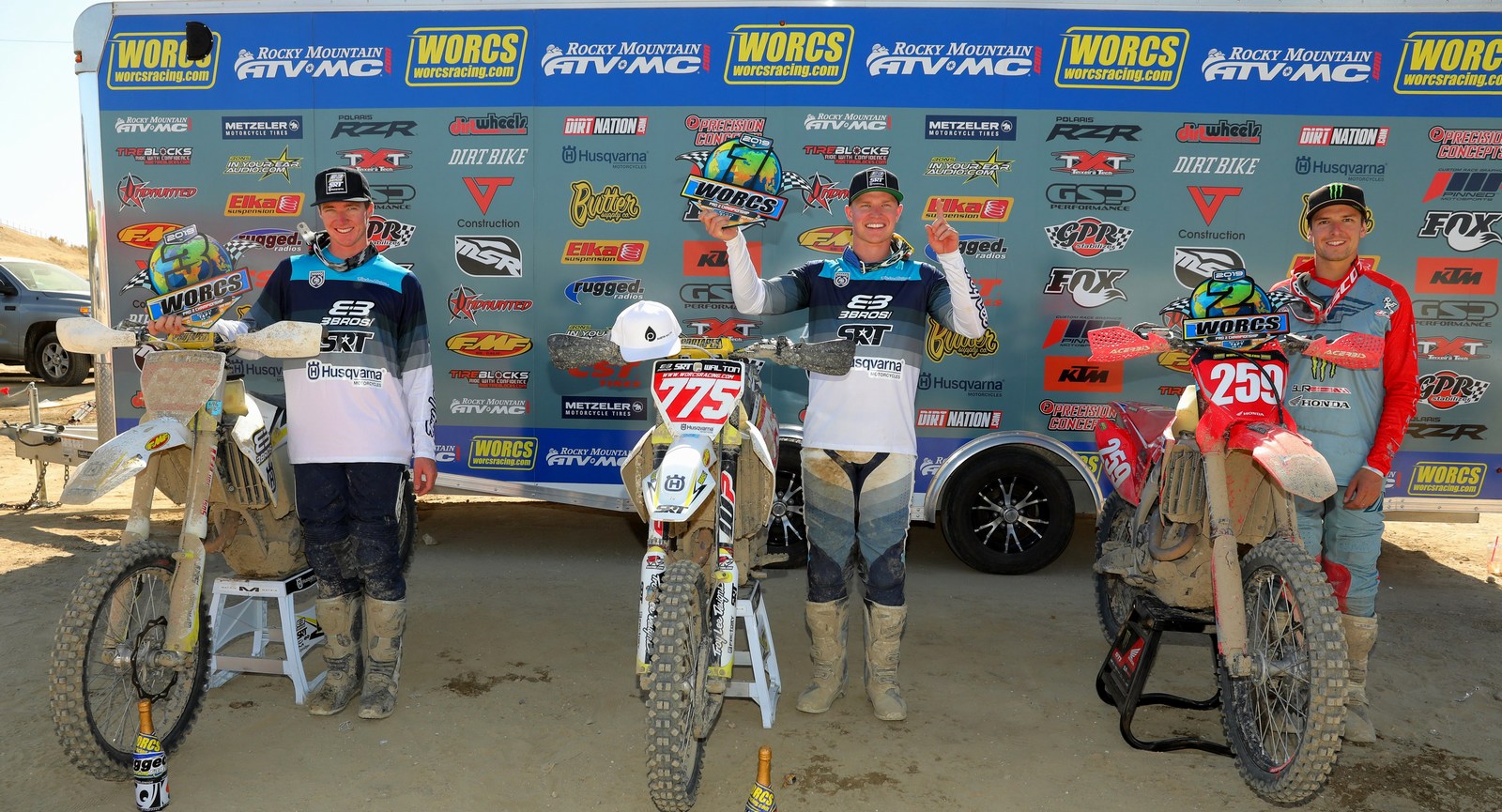 “The track was gnarly out there, and I had some good competition early, but I knew once I got out front, I could take advantage of the dust,” said Walton. “The track kind of fell apart but I tried to play the safe game and get the bike all the way to the end.” 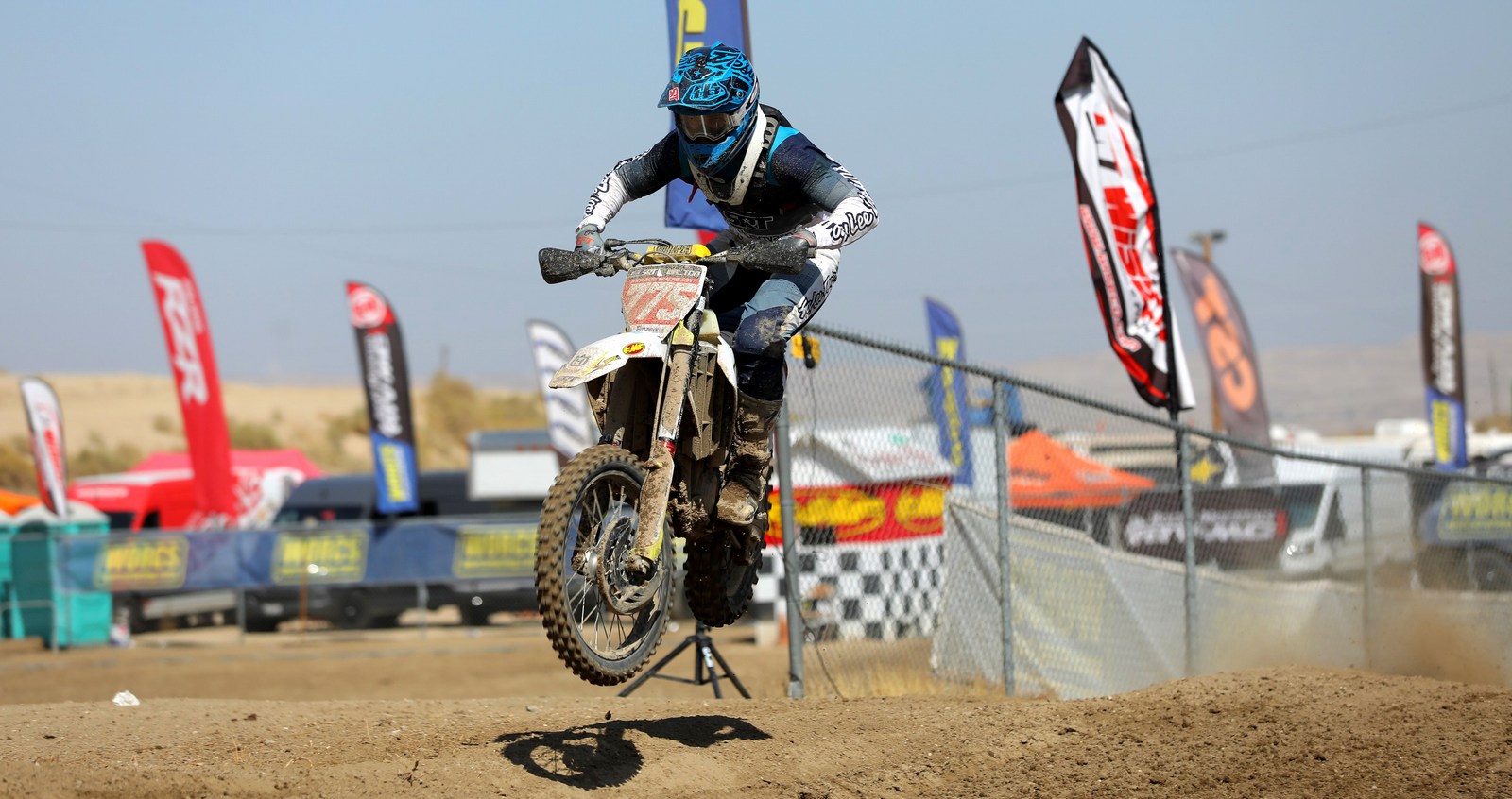 Lafountaine got a slow start on his Honda and that kept him in second for the entire race. Lafountaine is using these last two races as preparation for his planned move to the Pro class next season. “I want to get the time and experience in,” said Lafountaine. “I struggled at the beginning and that cost me. I had some good laps in the middle. I’m happy to finish the race and to build that base going into next year.” 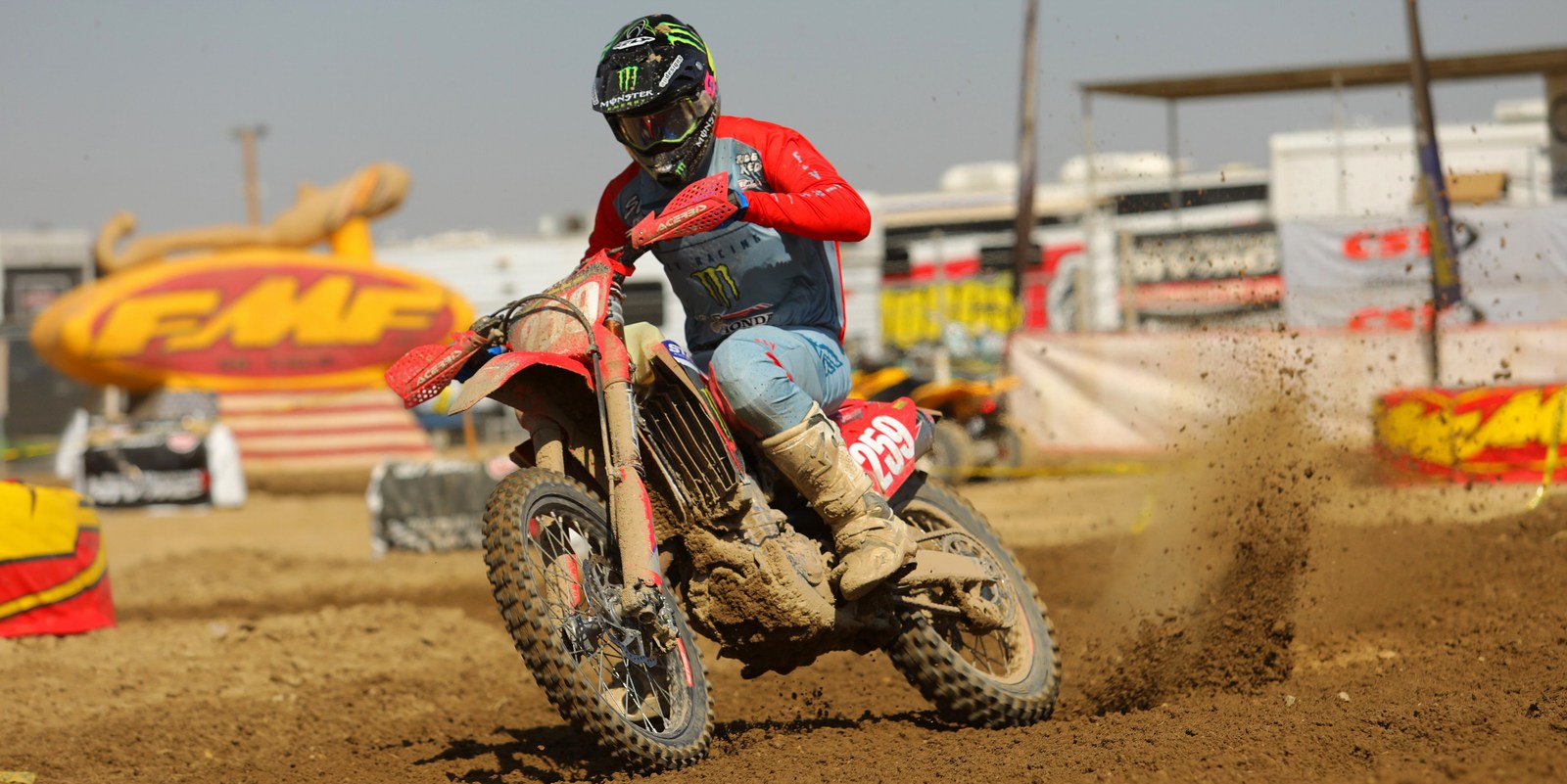 Walton rode a drama-free event to finish third. It marked his second podium of the season and his first since round three. “I’m thrilled to leave here healthy and happy in third,” said Kepple. “Congrats to my teammate Austin for the win. I’m looking forward to slowing it down for Endurocross next week and then finish off WORCS in Primm.” 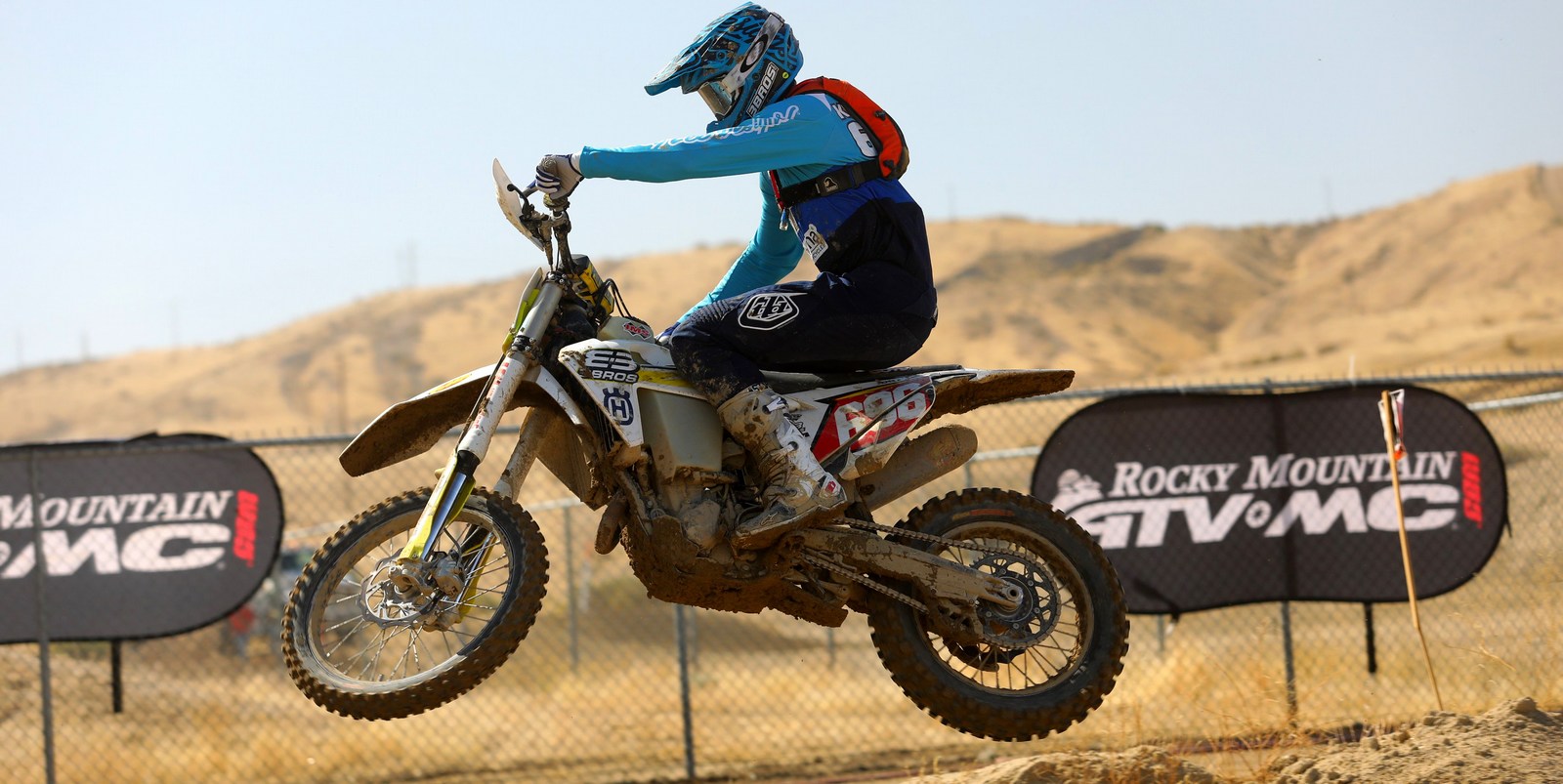 Mateo Oliveira rode his Gas Gas to another dominating victory, his sixth of the season on the two-stroke machine. Australian racer Will Riordan and Thomas Jones finished second and third, respectively, on their KTMs. Oliveira unofficially clinched the Pro 2 Lights title with the win. 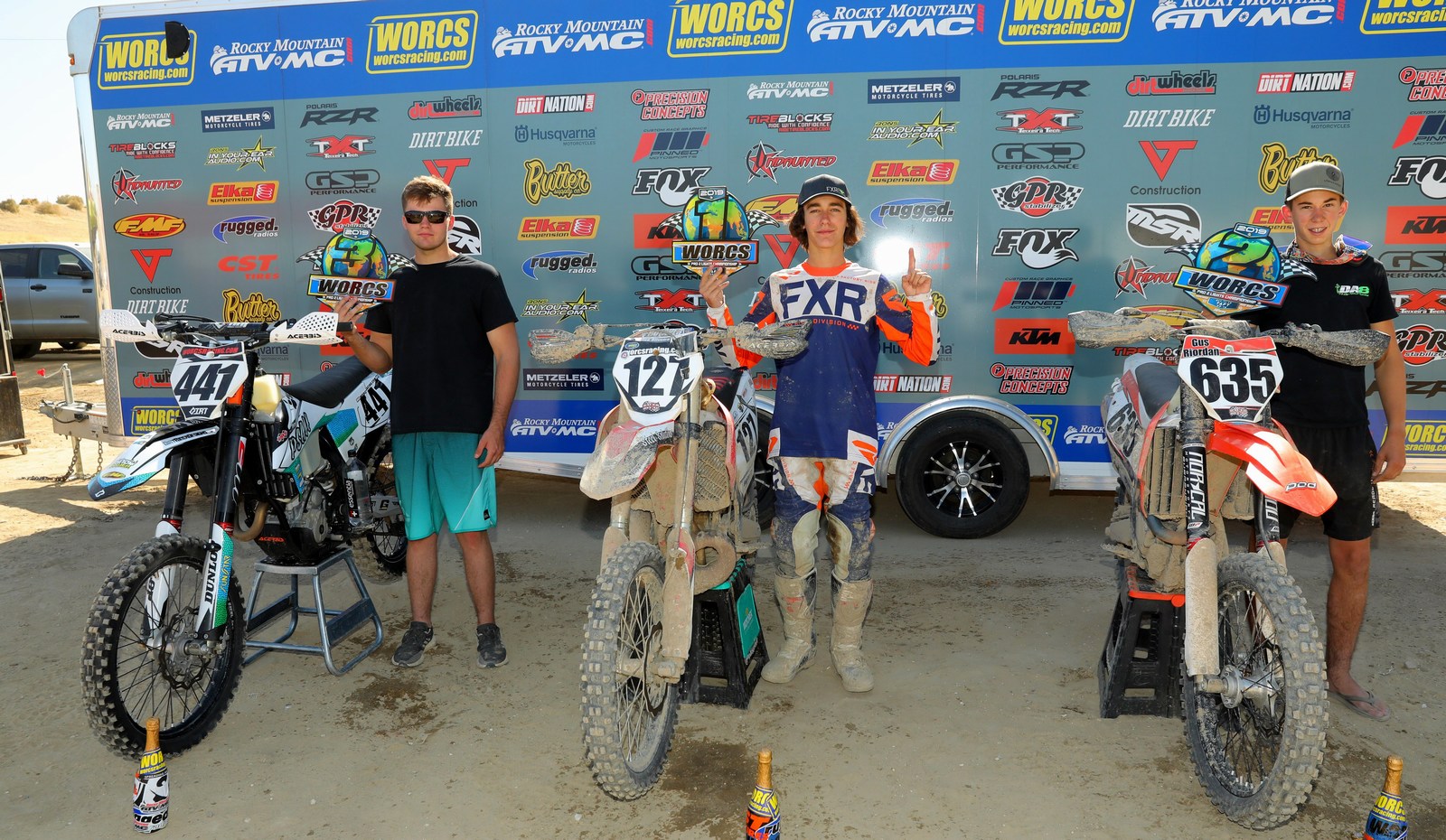 “I was able to get a good start, I sprinted for the first hour, then set into my pace and held on for the win,” said Oliveira. “It was super choppy, but the track team did a super job getting the track prepped for today.”

The WORCS motorcycles will finish off the 2019 season at Buffalo Bill’s Resort and Casino in Primm, NV. The finale is scheduled for November 22-24.