The event was held on a newly designed circuit at the Southern California off-road track, which used portions of the motocross facility, the trophy truck track, and other trails in the canyons and hills. Several of the track’s long straightaways were modified slightly, making the track more technical than in year’s past.

Mike Sloan battled with Baron at the dead engine start of the Pro ATV race. He took the lead out of turn two and Evan Spooner followed knocking Baron back to third. On the second lap, Baron made his move on Sponner. Entering the trophy truck track, Baron went side by side with Sloan, just taking the lead. From there he held off Sloan for the victory. Logan Huff rode from last place to finish third.

“They were roosting me pretty good and I was thinking: ‘I can’t have this,’ so I backed off until the second lap,” said Baron. “I came in hard on Spooner and drifted in front of him. When we left the trophy truck track and got on the back straightaway, Sloan had a little bobble. I was in another gear, headed straight and I made the pass on him. From there, I just tried to ride as focused as possible and came out ahead.”

Sloan was in another zip code at the start. After dispensing with Baron in the second turn, he and Spooner fought it out for the first lap while Baron regrouped. After losing the lead, he followed Baron to the finish. Spooner retired from the event on lap four. “I started trying to find some lines because the track was wet and we were sliding everywhere,” said Sloan. “Once I got going, I just kept riding and Beau came up behind me. I did everything I could to hold him off. We were neck and neck going into the corner and he just got me. So, I stayed behind him and tried to run my race. I had a safe race, and everything went well.”

While Sloan ripped at the start, Huff was caught unaware when the green flag waved. After getting his bike running, he made several passes on the first lap and then proceeded to spin out. He was scored in last place on lap one and, with eight other competitors in the field, he had to work hard to make it up to third at the finish. “I was sleeping at the line,” explained Huff. “There were nine guys on the line, and I came out dead last. I made a couple passes really quickly and then I spun out. My bike was overheating all the time, but I put my head down, and the bike stayed strong. It was great to have a lot of people to ride with today especially when I started at the back.”

In Pro-Am, Ricardo Gonzalez extended his points lead with his fourth win of the season. After starting fourth, Gonzalez began charging at the halfway point. He quickly passed Austen Turner and then set sail for Kenny Sanford, who had led from the start. With two laps to go, Gonzalez took the lead, but Sanford battled back, and they finished nose to tail. Turner was third. 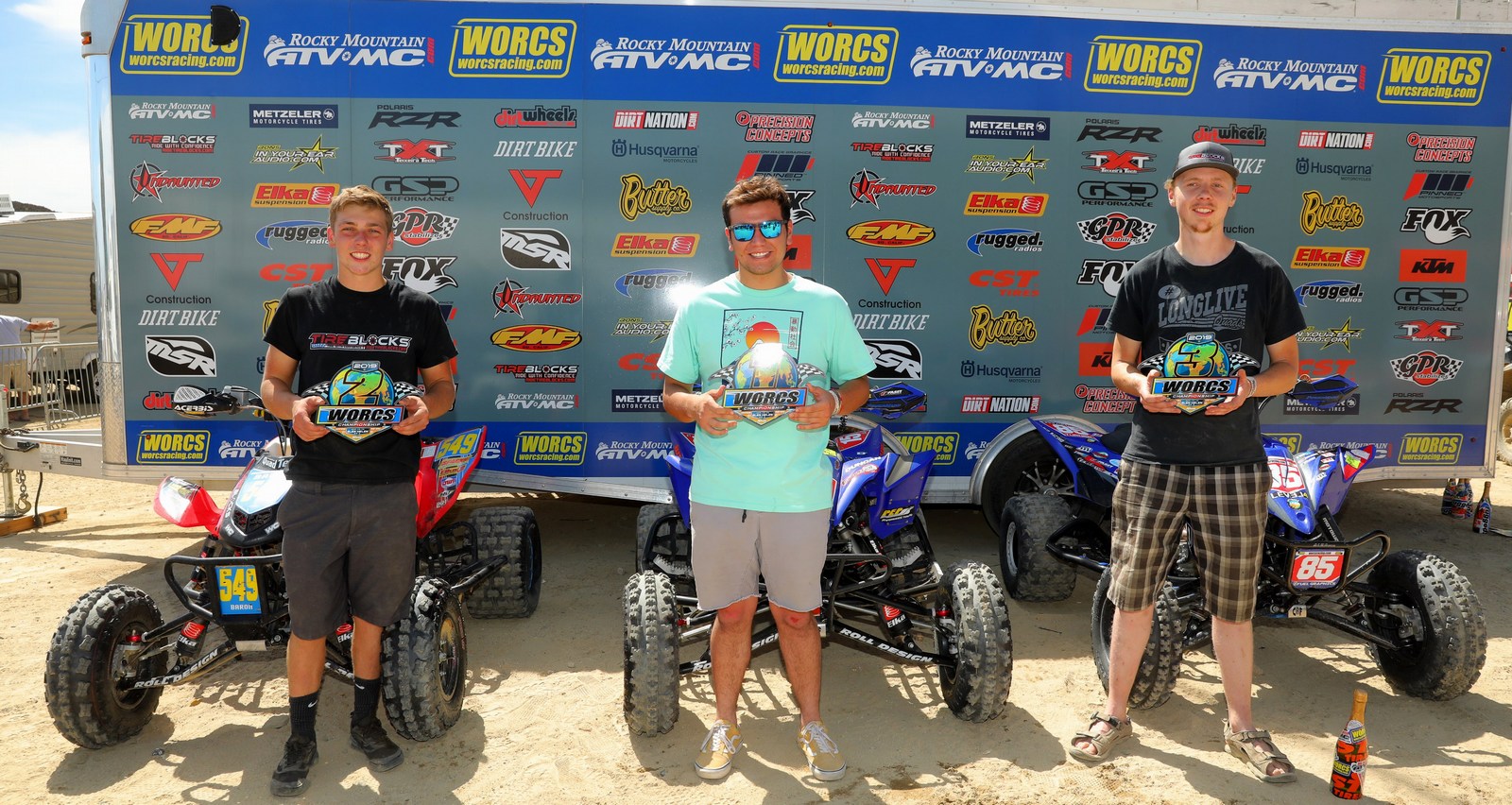 “With two laps to go I made the pass and I had to make it stick because he was going very fast,” said Gonzalez. “We were able to take the lead and the win today. It’s a fun battle and it was an exciting race.”

Sanford didn’t give up and was running equal with Gonzalez for the final two go-arounds. After taking the holeshot, it appeared Sanford was close to his first victory. Gonzalez, however, had other plans and the two had one of the more exciting battles of the year to finish out the race. “I put the hammer down and stayed with him and we finished just a second apart,” said Sanford. “That battle on the last lap with Ricardo was bumper to bumper and it was a good time.”

Turner followed Sanford early, but fell back after he started to pump up during the middle part of the race. Once Ricardo passed him, Turner attempted to make a last-ditch effort to catch the two frontrunners but fell short.

“I hung with Kenny for a little while, but his speed was a little more than I could keep up with,” said Turner. “I started to pump up in the middle, so I ran my own race after Ricardo got past me. I tried to put in a last-lap charge, but I was too far back by then. I’m still happy with third.”

The next WORCS ATV race is scheduled for October 4-5 at Honolulu Hills Raceway in Taft, CA.