McCleary, WA – GNCC veteran Thad Duvall made the 2,600-mile trip west from his hometown of Williamstown, WV pay off by sweeping the Pro portion of the WORCS motorcycle weekend at Grays Harbor ORV Park. The second part of the doubleheader event was round eight of the Rocky Mountain ATV MC WORCS Series Presented by Polaris RZR and Dirt Bike. 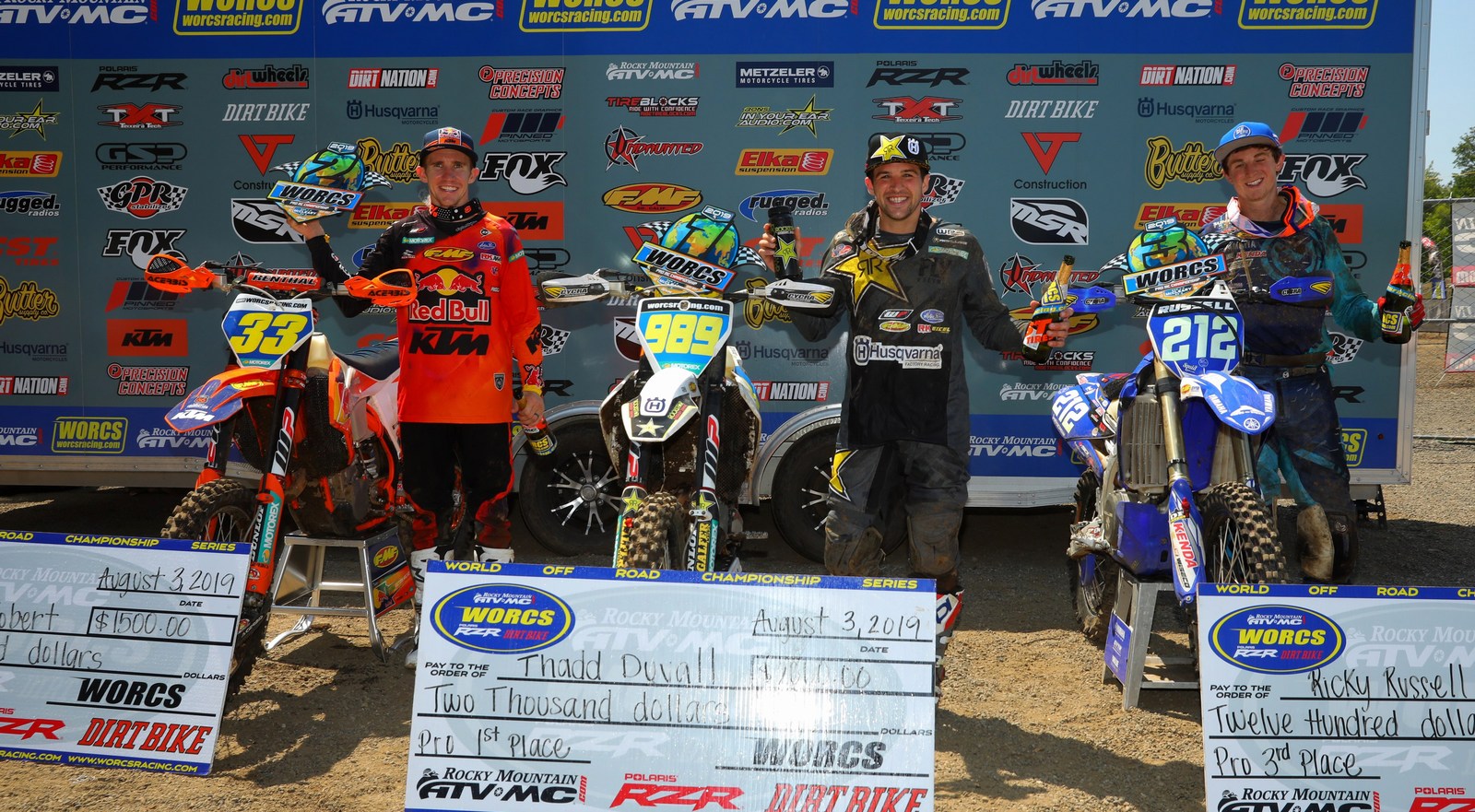 The weeklong event marked the first time WORCS had visited the eastern Washington facility in 4 years. The circuit meandered through tight woods trails and featured plenty of elevation change. Along with two Pro sections used during the first round here, officials also added a single-track downhill section that made for a nail-biting crawl in the slick conditions.

In the Pro race, points leader Taylor Robert took the lead at the start on his KTM but Duvall was quickly on his tail. Riding a 350 Husqvarna, Duvall and Robert battled for several laps before Duvall took the lead. The slick conditions bit Duvall though and he crashed, allowing Robert to re-take the lead. Duvall made up time in second and when Robert pitted he took the lead for good riding to his second victory of the week.

“It was tough out there,” said Duvall. “The Pro only section was super tough and challenging. It was fun coming off the mountain like that into single track goat path. They did a really good job changing up the track. It was a cool learning experience riding the Pacific Northwest dirt. I had a blast and I’m grateful for the opportunity.” 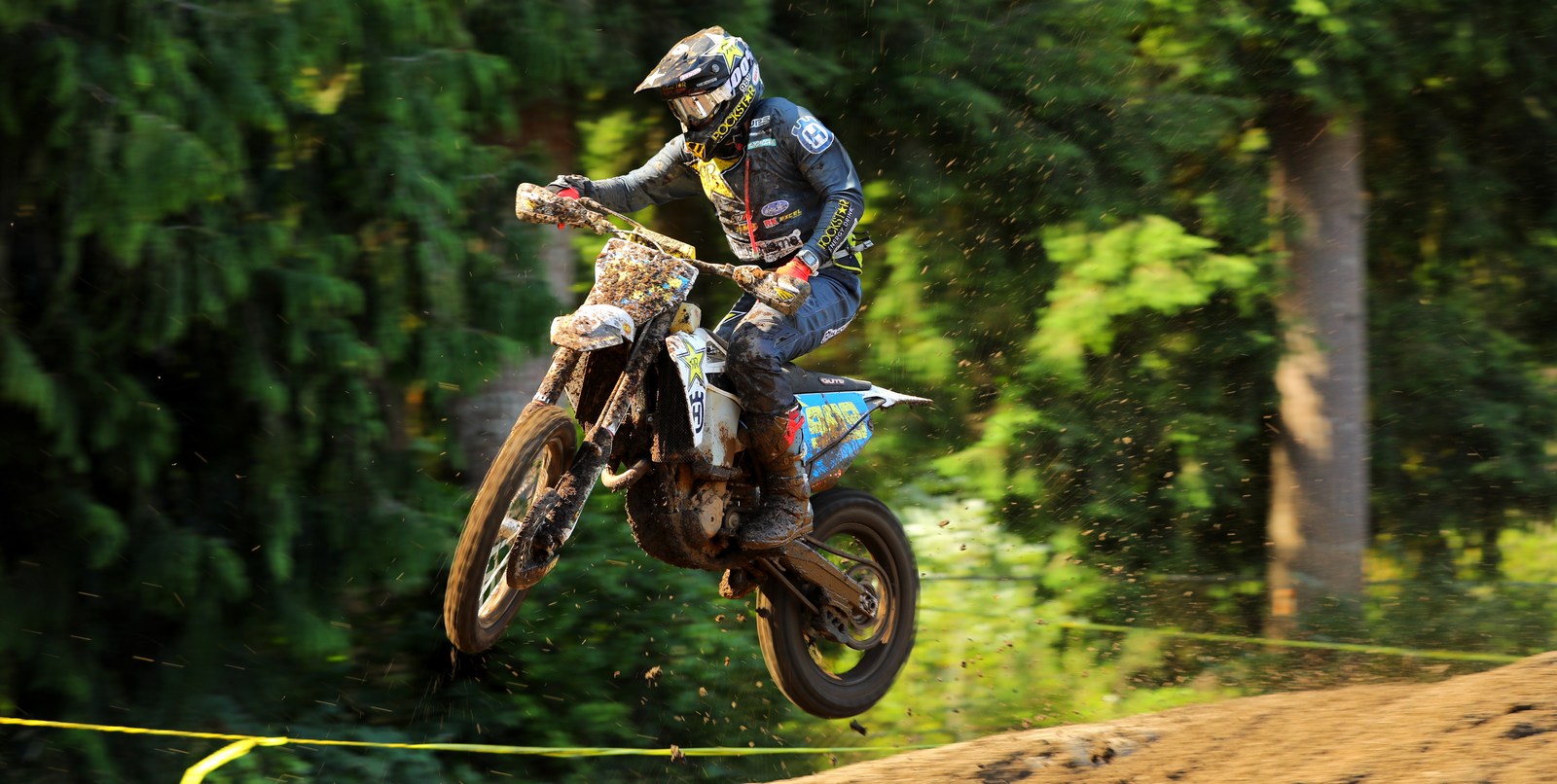 Duvall said the track had changed completely from the first round here to the second event. Heavy rains mostly affected the wider sections of track where traction robbing mud was prevalent. Duvall enjoyed adapting to the conditions. “Today was a dramatic change; it was cool adapting and learning to ride it,” said Duvall. “Being smooth was important today and I learned that early in the race. I was just over riding the bike too much. I adapted and went from there.” 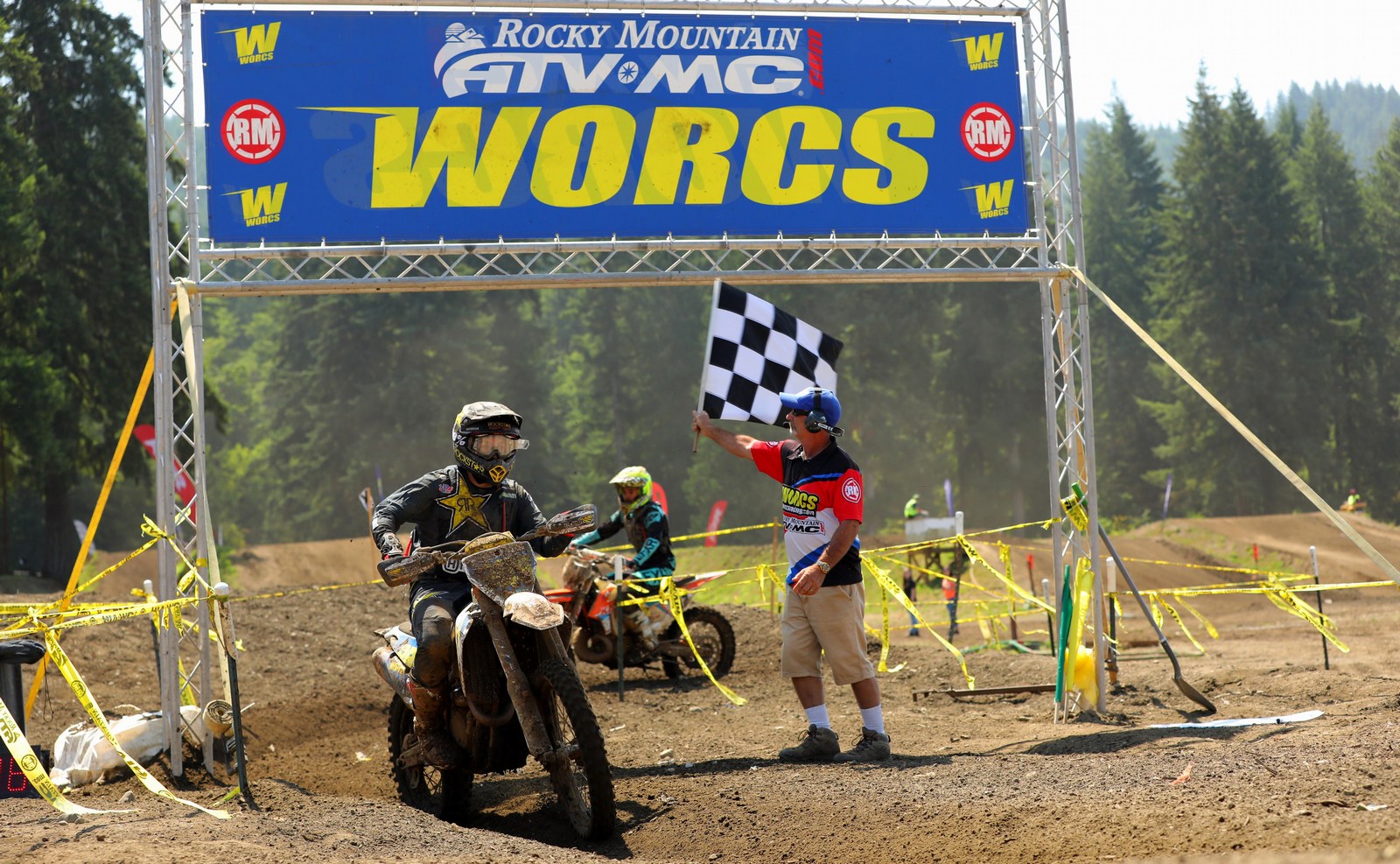 Though Robert’s consecutive win streak was stopped at six earlier in the week, he was still pleased with finishing second twice in row as the runner-up finishes allowed him to further pad his points lead. He was also pleased to be able to hang with Duvall in the woods.

“On the last couple of laps Thad was just killing it in the woods,” said Robert. “This is more his style than mine, so I’m glad I could keep pace with him. It’s a bummer not to win, but when you look at the big picture, it was two really good races. I’ll just go home and do my homework for the next one. Glen Helen has always treated me well, and I’m excited to go back there.” 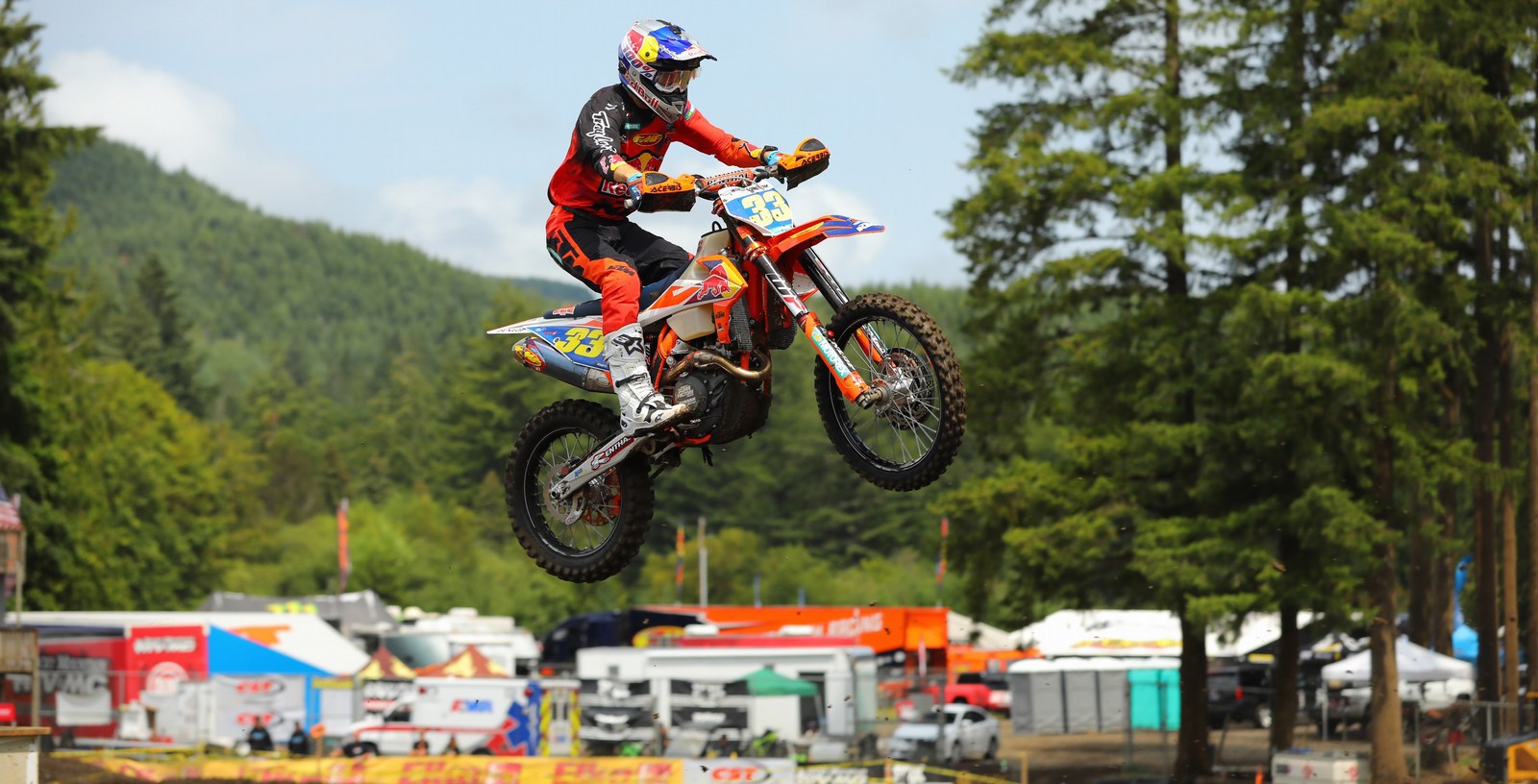 Ricky Russell finished third for the second consecutive race. The Washington native enjoyed his first WORCS experience and hopes to do more in the future, as well as returning to GNCC when it comes back from summer break. “For what I was competing against, I was happy,” said Russell. “I knew Thad was going to be hard to beat and obviously he was. I’m back to GNCC for the rest of the year and I’m going to try to do Six Days.”

Dante Oliveira scored his second straight fourth-place finish. Riding his KTM, Oliveira was also confounded by the slick conditions, so he focused on staying as smooth and consistent as possible. “The track was super slick and beat up, so it was hard to ride smooth and stay on the bike,” said Oliveira. “So, I pretty much rode fourth for the race and tried to put together as many smooth laps as I could.”

In Pro 2, Austin Walton won his second consecutive event. The new Pro section was a definite challenge for Walton and his Husqvarna as he fell several times on the wicked downhill. The two wins put him in excellent position in points going into the final two races of the season. 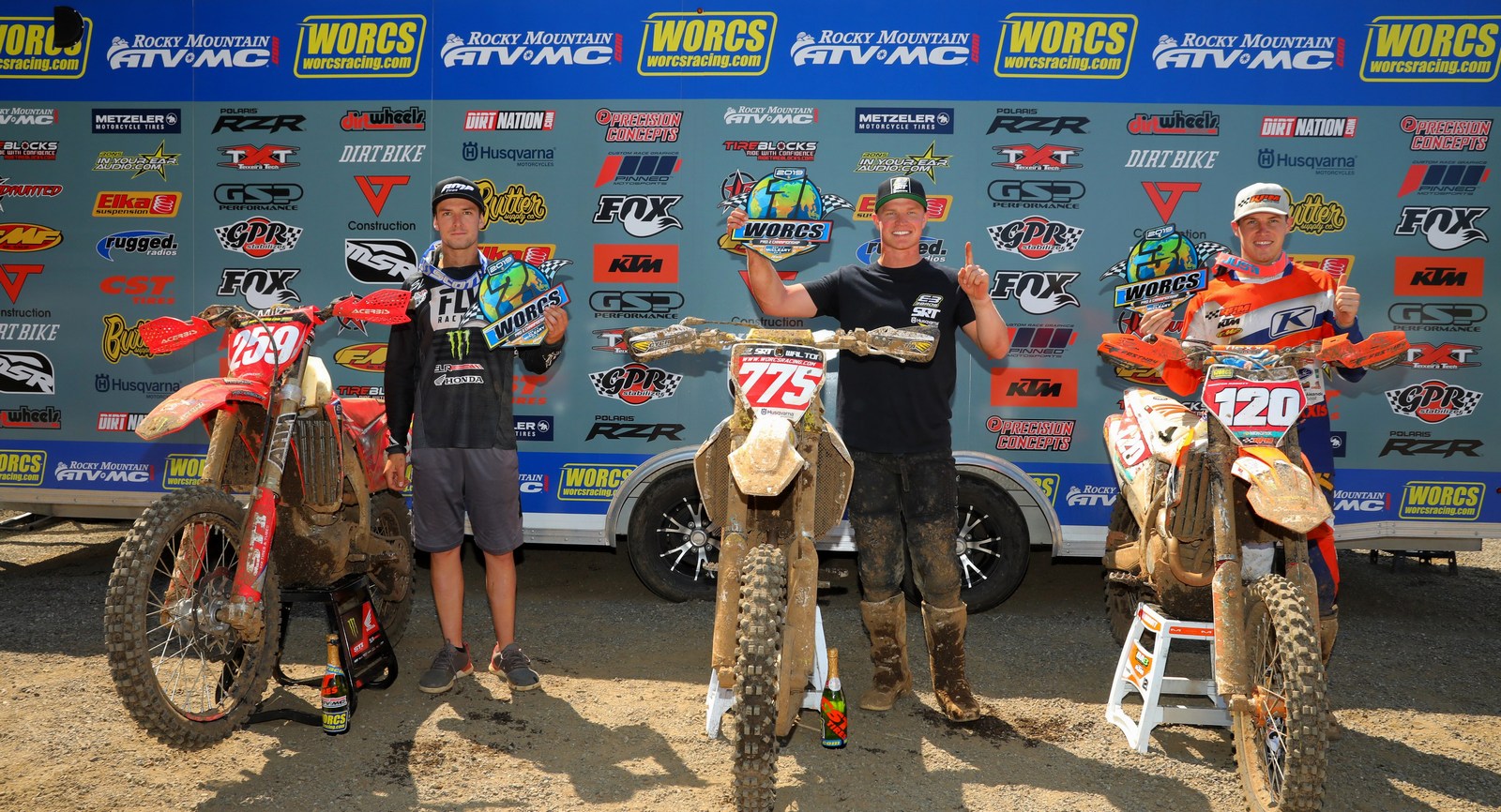 “I had so many mistakes through that section that it was pathetic, but it definitely challenged me,” said Walton. “I hit a tree and put nice raspberry on my shoulder. I went over the bars and had a kid land on me, but hey, no excuses. It was a fun weekend and I’m happy to win all of my races.” 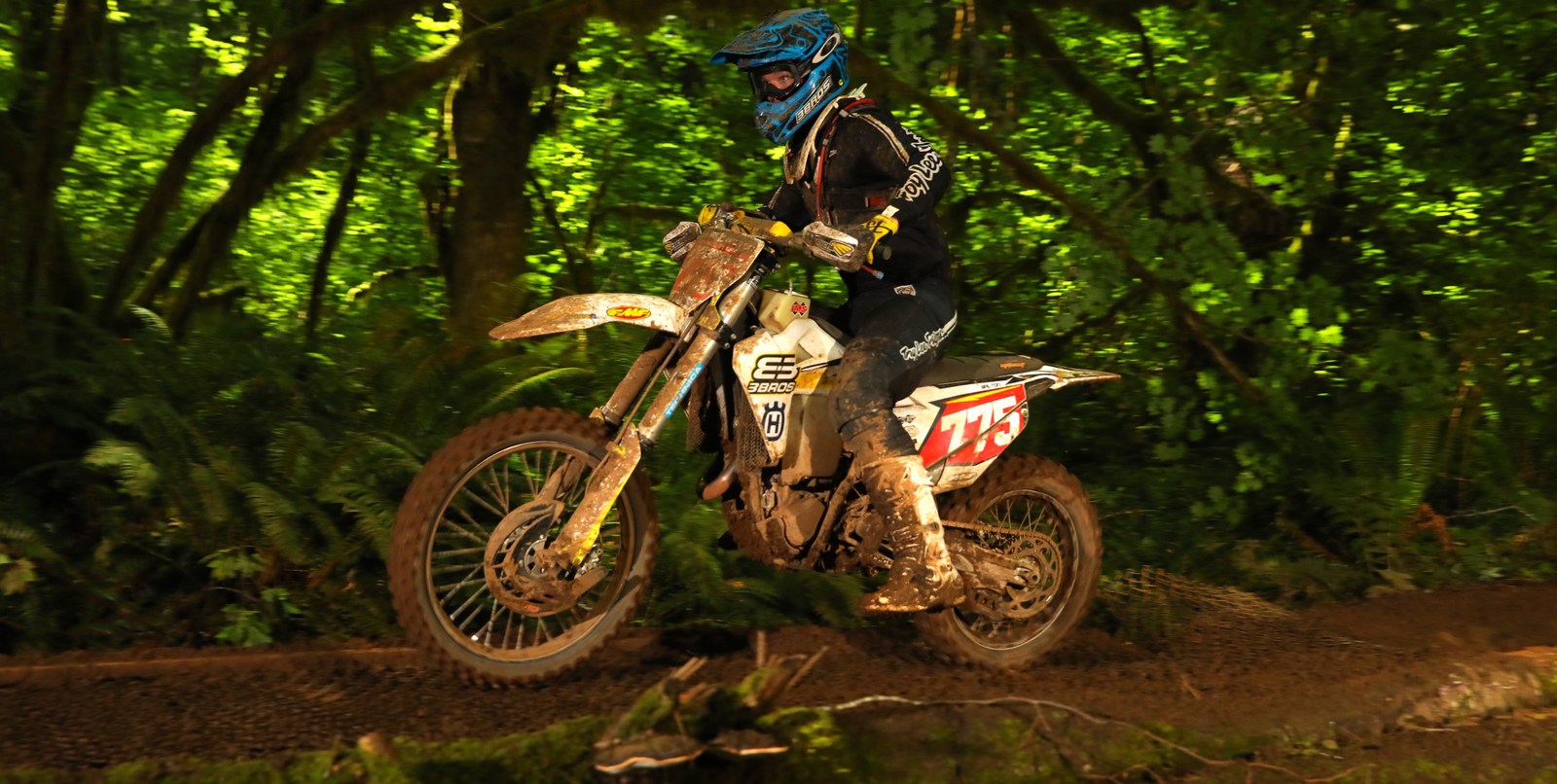 Tallon Lafountaine bounced back from seventh-place showing in the first race to net a runner-up finish on Saturday. Riding a Honda, Lafountaine struggled throughout the race, but still came home second to help keep his championship hopes alive. Austin Serpa was the Pro 2 points leader coming into the event, but two finishes off of the podium, as well as a 13th and a DNF by Clayton Hengeveld all but assure a huge shakeup in the championship before the last two races. “Today was brutal on one of the trickiest tracks I’ve ever ridden,” said Lafountaine. “The trees made it so tight and it was slippery. I’m happy to get through it. I’m tired of getting so many seconds but we’ll get there.”

Cooper Abbott scored his second podium of the week on his KTM, finishing third. Abbott actually hadn’t planned to attend this round, instead scoping out the next Endurocross race. A last-minute decision put him on the starting line for both races. “I can’t say I came in super prepared but I knew this race was going to be a lot of fun and it was,” said Abbott. “Tallon and I went back and forth a couple of times. Then he pulled away at the end and I put it into survival mode for the last lap and a half.” 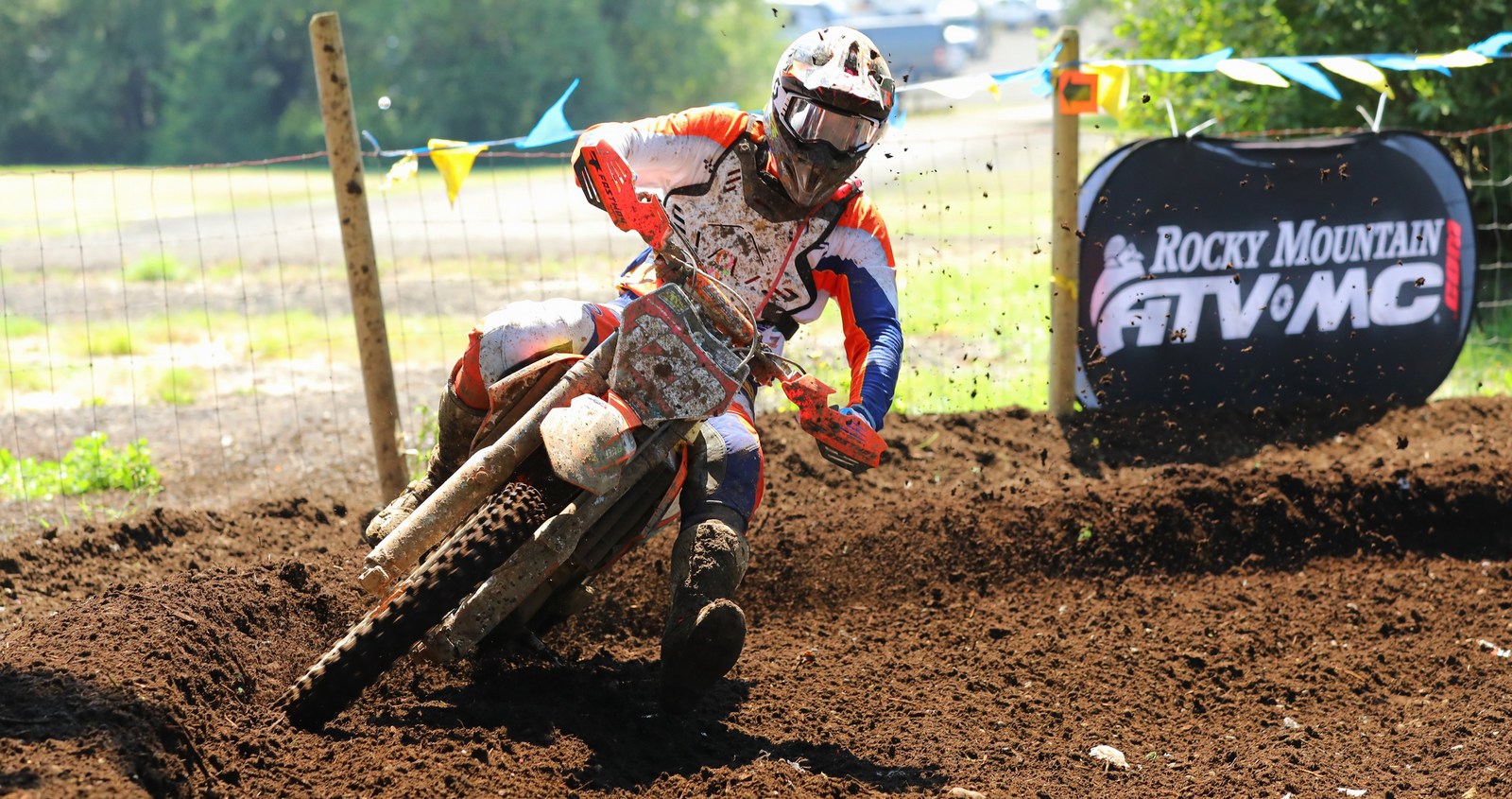 In Pro 2 Lights, Mateo Oliveira also completed the sweep. The high torque of his 2-stroke GAS GAS forced him to lug the bike in fourth gear for much of the race to ensure traction. Oliveira continues to lead the points and should have a tidy gap going into the next event. 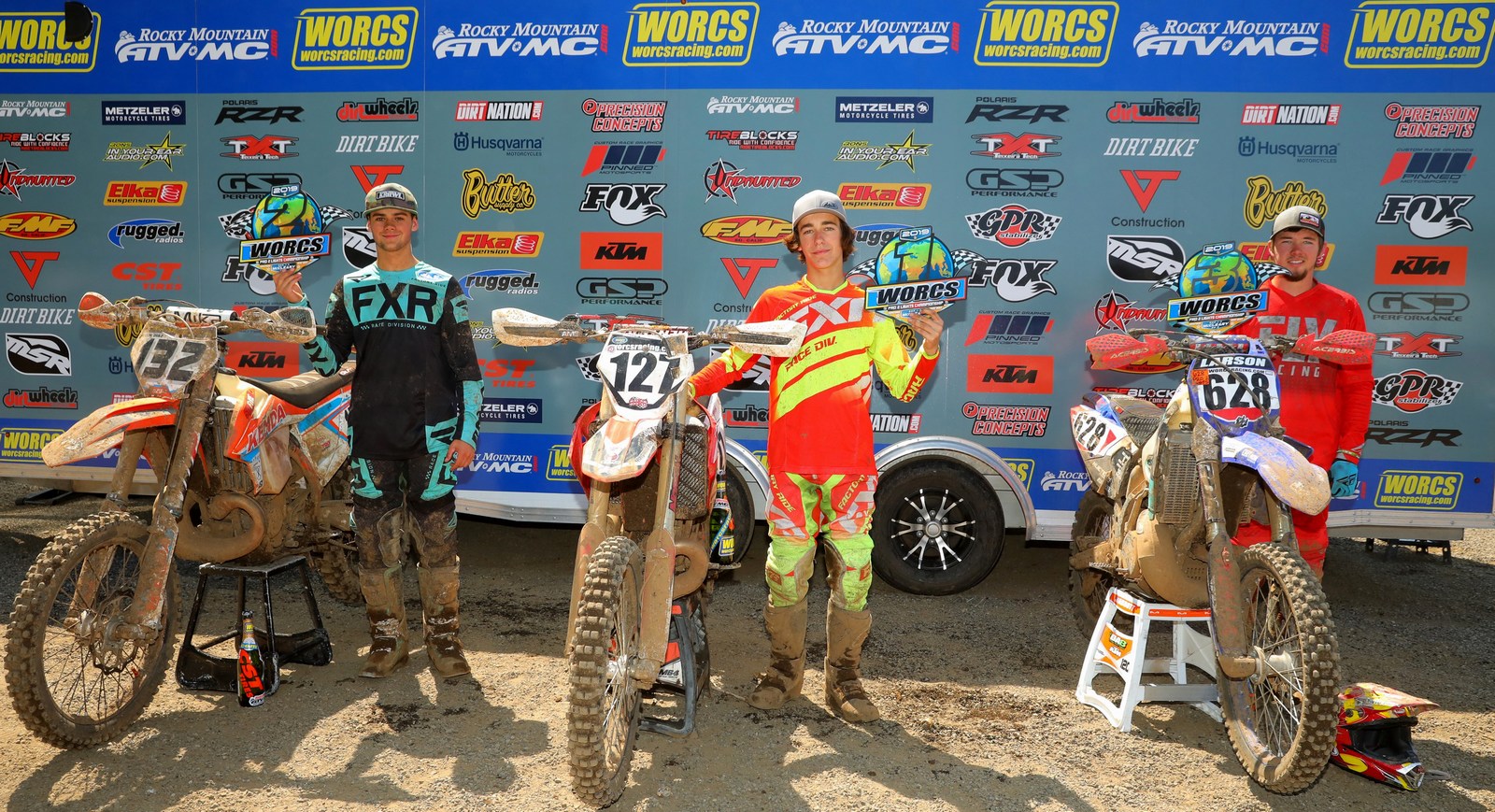 “The track was super gnarly and slick,” said Mateo Oliveira. “I was in fourth gear the whole way. You had to be lugging it to get as much traction as you could. On the roads I was sliding everywhere trying to stay out of the mud.”

Seven Diaz scored his second runner-up finish of the week on his KTM. Diaz focused on consistency throughout the race and began gaining on Mateo Oliveira during the closing laps but fell short. “I just tried to make consistent laps,” said Diaz. “I tried to catch him, but he was going too fast for me.” 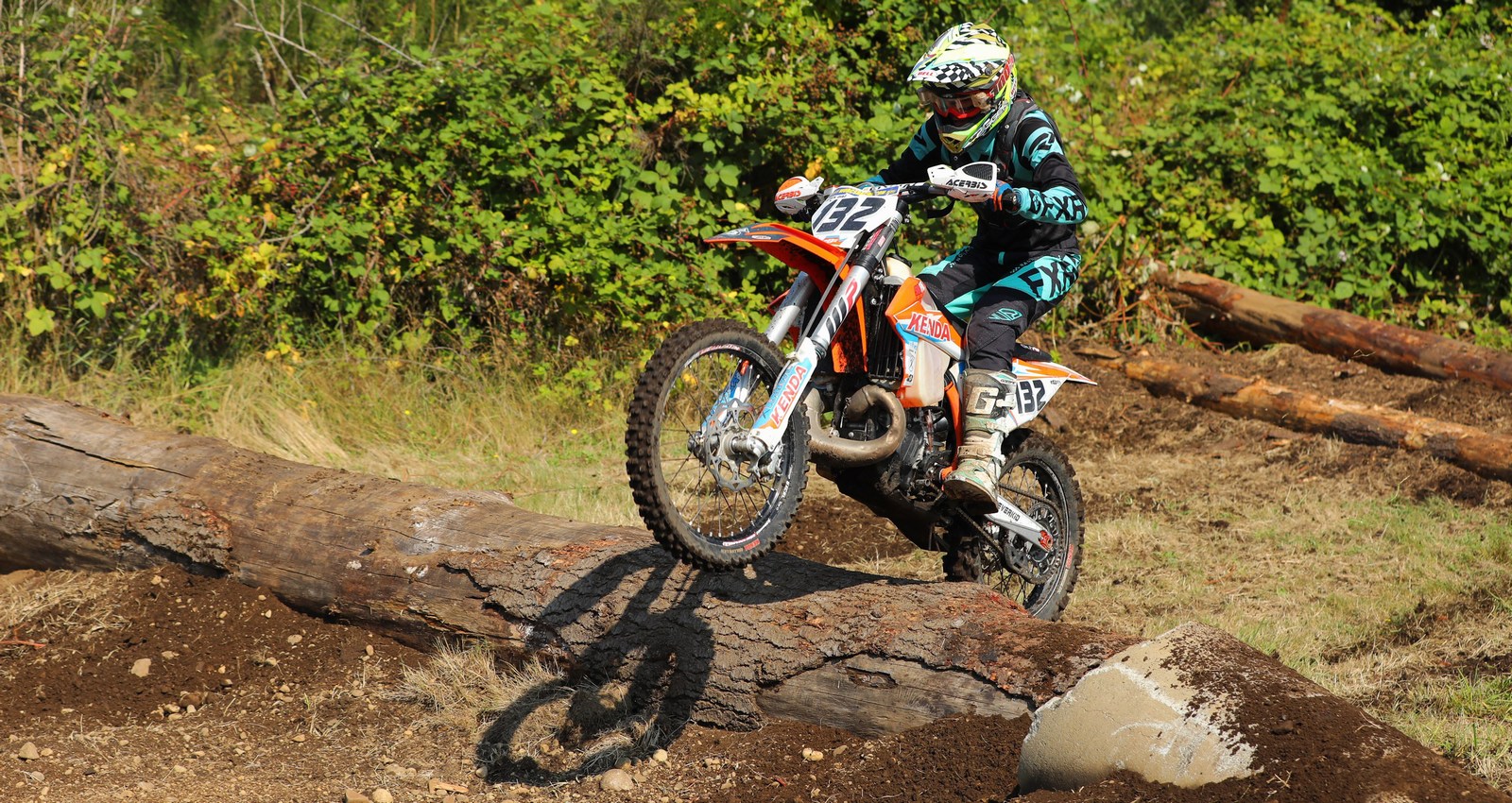 Chase Larson was third on a Yamaha. The Oregon native was making his WORCS debut this weekend so coming away with a podium was a nice reward. “I had a decent start and worked my way up throughout the race,” said Larson. “I’m used to racing in the woods and I had a great time.” 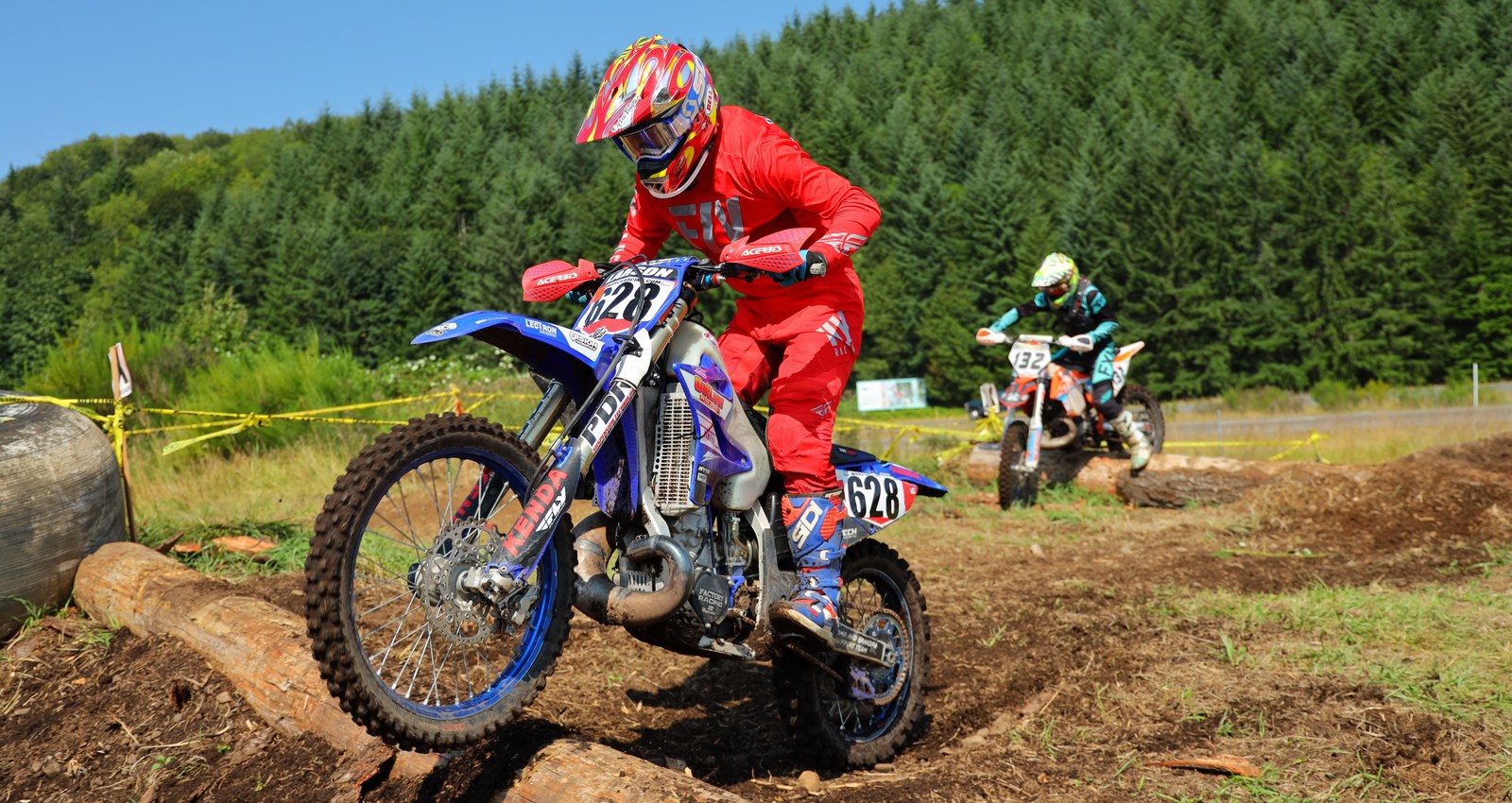 In Women Pro, Brandy Richards remains undefeated as she won her eighth consecutive race. After snagging a Pro 2 Light podium on Wednesday, the she struggled with the slick conditions in the second event and finished seventh in that class. 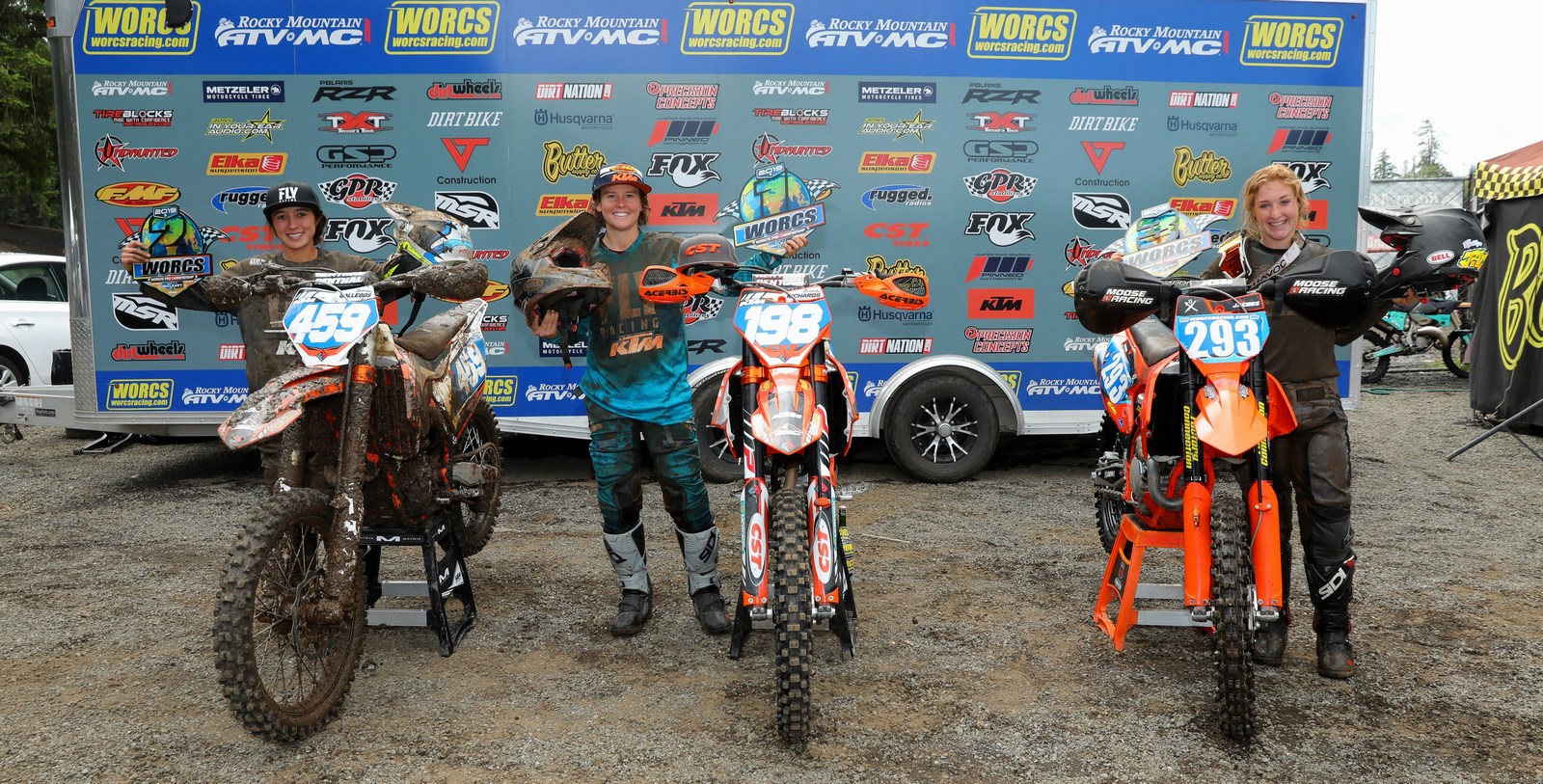 “It was a pretty good week,” said Richards. “The first one was a little bit better. I did well on Wednesday but when it got slick I struggled a little bit. This was completely different, and I loved it. I like the change of scenery and the tighter track. It was a little tough for me, but I’ll get better at it.”

The WORCS Series motorcycle classes head next to more familiar digs as it heads to Glen Helen Raceway in Devore, CA. That race is scheduled for September 6-8.