McCleary, WA – It’s taken six races, but finally someone with a surname other than Robert won a WORCS Pro Motorcycle race. In this case it was Thad Duvall, who made a special trip during GNCC’s summer break to compete in round seven of the Rocky Mountain ATV MC WORCS Series Presented by Polaris RZR and Dirt Bike. The event, part of a doubleheader of racing throughout the week, was held at Grays Harbor ORV Park. 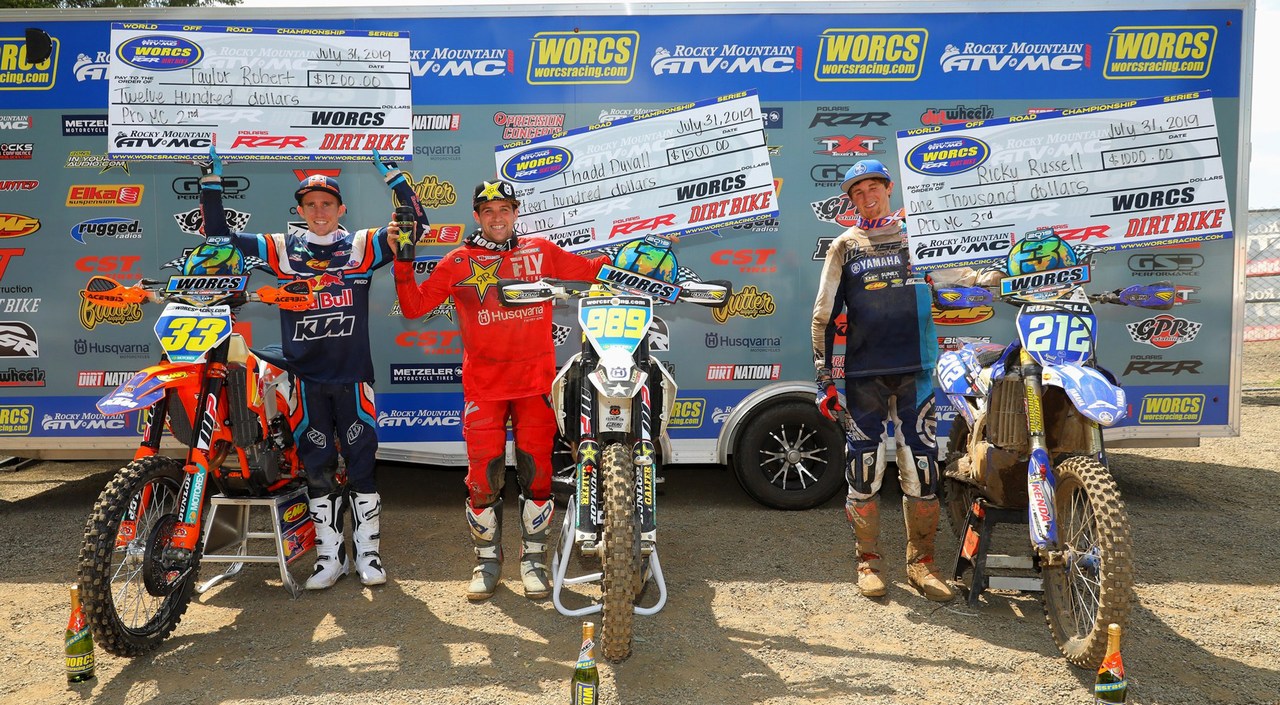 The event marked WORCS’ return to Olympia, WA-area track after having last raced here in 2015. The track featured deep woods, and a curious racing surface that looked tacky, but rode more like silt. Two special Pro sections comprising rocks, logs, and tires. The combination made for a challenging race on the scenic course where mistakes and falls were numerous, and exciting racing was the norm.

In the Pro race, Taylor Robert grabbed the early lead from Andrew Short and appeared to be poised do what he’s done in all six races this season: Run away with the show. He dominated the early part of the two-hour race, while Duvall struggled. After crashing on the first lap, Duvall had to grind his way through the field, finally taking second just before the final lap.

With the white flag waving, Duvall began to catch Robert. In a single-track section Robert was held up behind a lapper. Robert made his move, but the lapped rider fell just as Robert was beside him and fell on top of the points leader. Duvall, who had caught Robert, also tried go between the two and fell on top of both of them. Duvall got out of the pile first on his Husqvarna and made quick work heading to the finish for the win in his first start this season. “Once I got into second, I could see Taylor so I tried to ride the best I could and limit my mistakes,” said Duvall. “Once I got the white flag, I was able to hit all of my lines and pressure Taylor. I forced him into a mistake with a lapper and just cruised from there.” 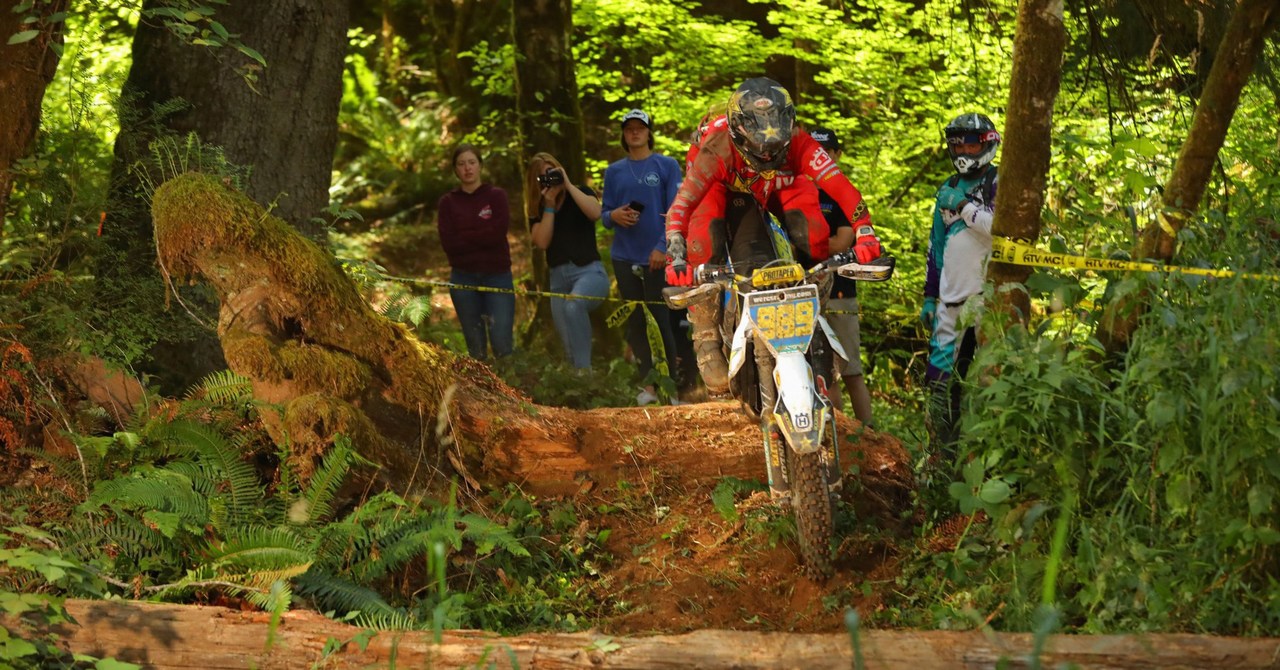 Duvall had his share of falls, too, especially when acclimating to the track’s unique dirt. Once he got through qualifying and the first few laps of the race, though, his woods racer instincts took over and rode an excellent race. “It was pretty similar to GNCC, just with different dirt than I’m used to riding,” said Duvall. “I got used to it during the qualifier, they made some changes on the bike, and it was good. I was impressed. These West Coast guys go really well.”

Robert’s usual machine-like precision was tested here. The slick racing surface challenged him, but he still built an excellent gap going into the final lap. He recovered to finish second and still holds a virtually unbeatable lead in points as the season goes into the stretch.

“I made a major mistake almost every lap and it definitely caught up to me at the end of the race,” said Robert. “All in all, it was still a good race. I’m just bummed to lose the race that way. The dirt is very deceiving here because it looks really good but it’s very slippery. It’s definitely hard to get used to. We have a chance to make it up in a couple of days and I know what I need to do.”

Ricky Russell finished third on a Yamaha. After starting fifth on his first-ever gated start, the local racer from Duvall, WA, held off WORCS regular Dante Oliveira for the final spot on the podium. He welcomed WORCS’ return to Washington State. “I was slowly picking people off,” said Russell. “I struggled getting up those rocky hills. My setup was just a little off but I’m happy with third, especially holding off Dante. I love it when WORCS comes to Washington. It’s good to see the series building again.” 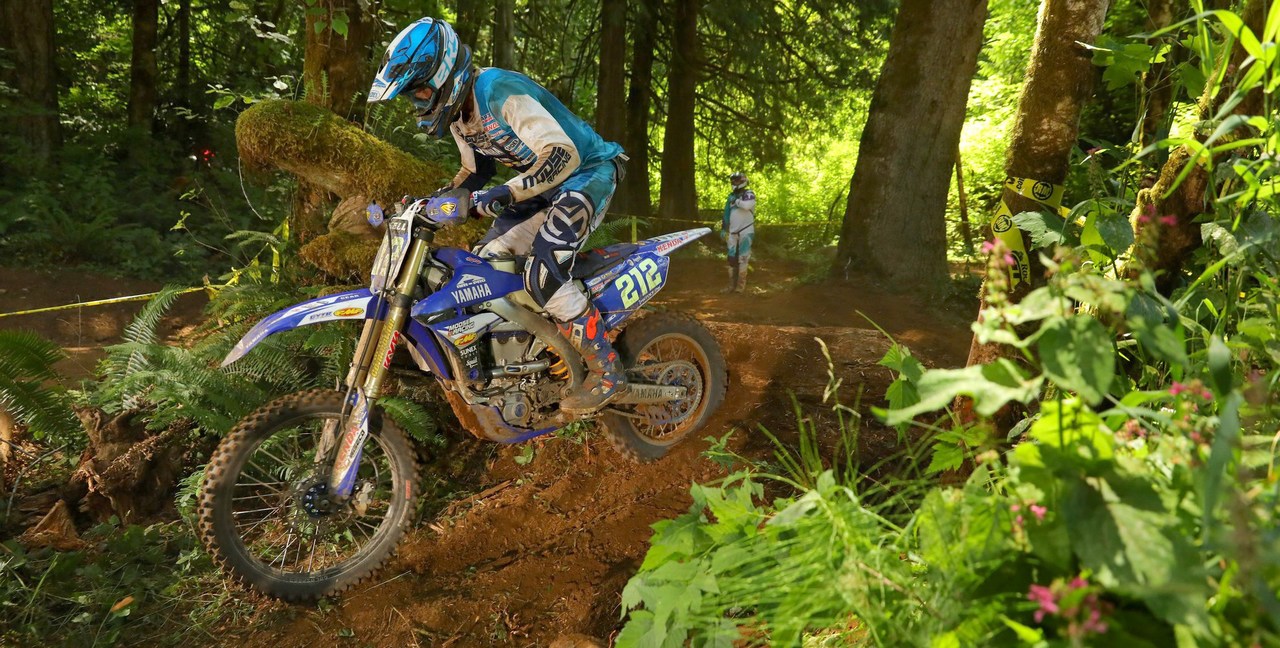 Oliveira started the race slowly and had to pick his way forward. After getting caught up and crashing in one of the Pro sections, Oliveira rode his KTM to fourth, just missing the podium. The fourth equaled his worst finish of the season, showing how much he’s grown this season as a rider. “I just picked a stupid line around the logs and I ended up wedged in between the logs and the trees,” said Oliveira of his crash. “I got hung up and tossed it away but I was able to recoup and charge from there. I made a few moves and caught up to Ricky but he just had a quicker line through the woods on the downhill. I just held my pace from there and finished fourth. I loved the track. I thought it was very well put together and fun.” 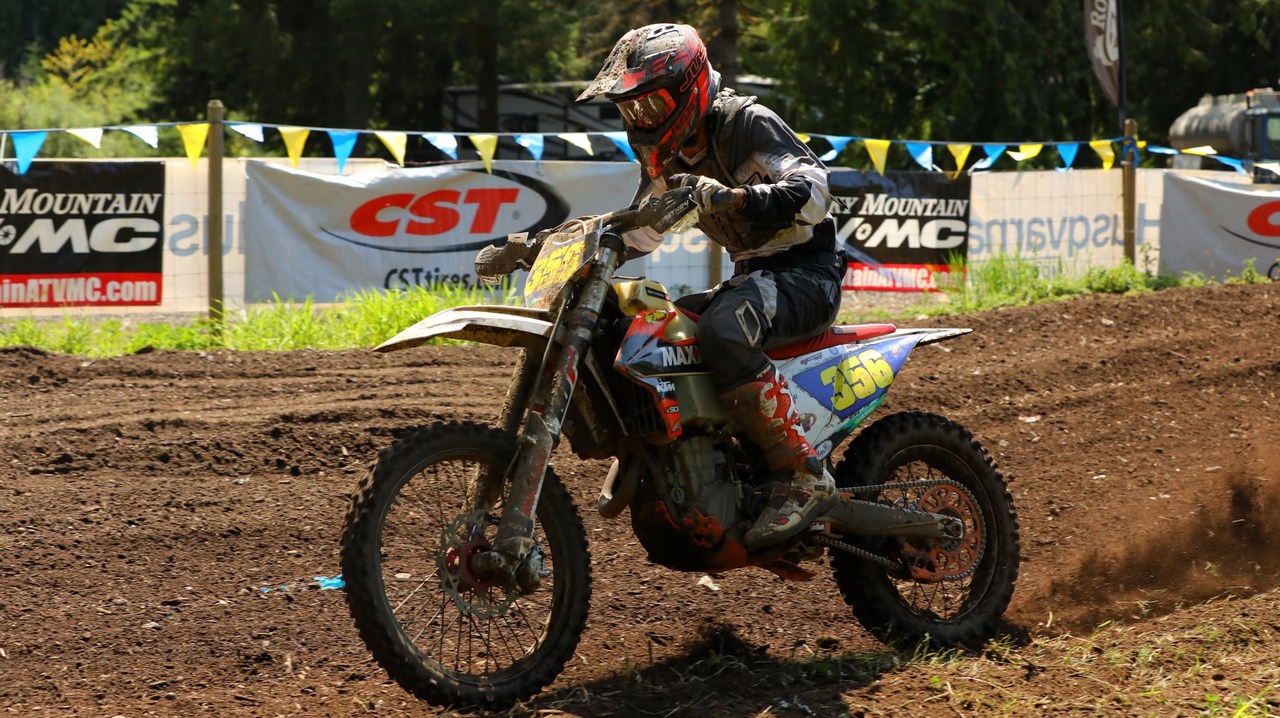 Ricky Dietrich finished fifth on his Honda. While still feeling the after effects of an illness earlier in the week, Dietrich ran a slow and steady pace to score his fourth top-five finish of the season. “I felt really good at the end and it was a really good day for me,” said Dietrich. “If you take the East Coast guys out, a fifth puts me on the podium and that’s where I want to be right now. I’m just proud of myself and the work I did over the summer break.”

In Pro 2, Austin Walton took his third victory of the season. After snagging the holeshot on his Husqvarna, Walton held the lead early and never surrendered it. Cooper Abbot was second on a KTM, ahead of the Husqvarna of Shane Logan. Clayton Hengeveld, who had the points lead coming into this round, was still feeling the effects of a broken leg sustained earlier this season and finished 13th. 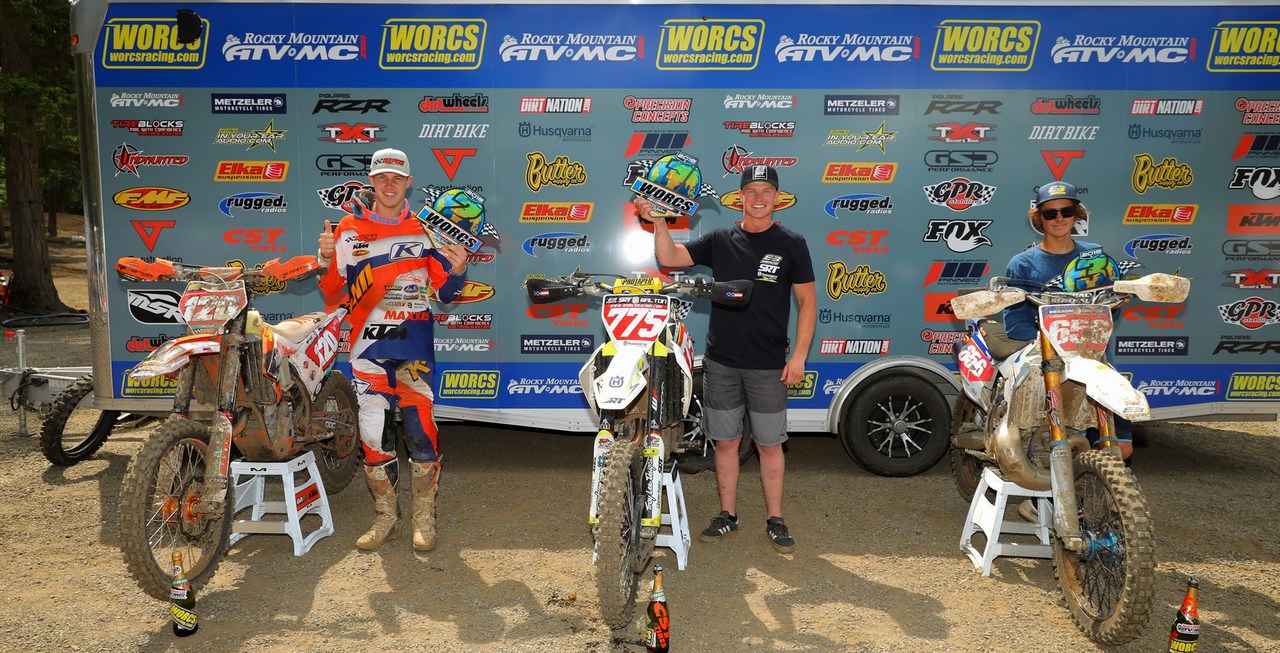 Walton came into the race not expecting the technical nature the two Pro sections brought to the track. Despite taking a dominant victory, Walton pointed out that the competitiveness of the class ensures he always has to stay alert. Hengeveld’s finish, as well as finishes out of the top five by Austin Serpa and Tallon Lafountaine puts him in an excellent spot to make a run for the title. “They definitely challenged me with this track and especially the Pro sections, so it feels good to get that win,” said Walton. “I can’t underestimate anyone out there. Someone will always come out with a crazy fast line, so it keeps me on my toes. I’ve never raced something that is so scenic.”

Abbott used his endurocross experience to his advantage in the Pro sections and scored his second podium of the season in his third start. After starting near the back of the field, the slippery dirt challenged Abbott throughout the event. “The little endurocross sections fit my style and I felt good there,” said Abbott. “I started second to last and you can’t do that with these guys. They are just too fast and too consistent. I closed up on Walton at the end, but it was too little, too late.” 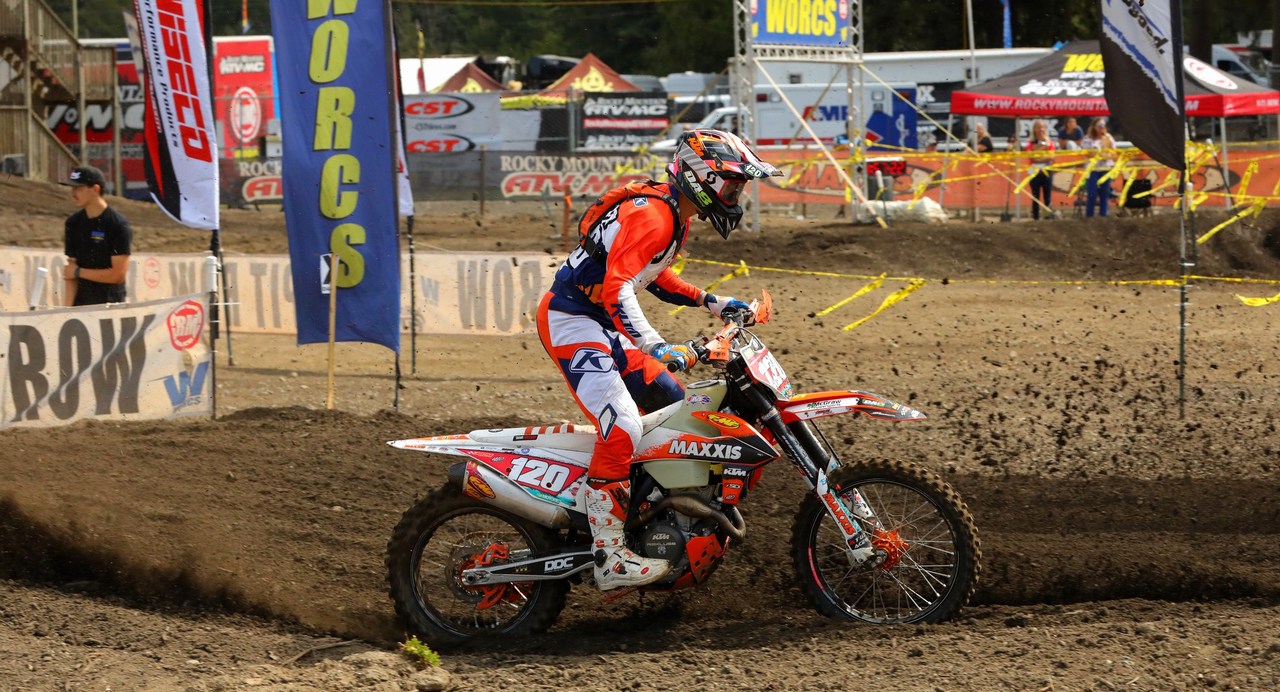 Logan rode his 2 stroke Husqvarna to his first Pro 2 podium. A desert racer at heart, Logan caught on to woods racing quickly and finished third. “I hardly ever ride woods,” said Logan. “I’m from Hesperia with the wide-open desert so when we came here it was something totally different for me. I just kept my gear high, tried not to make mistakes, and I rode my race.”

In Pro 2 Lights, points leader Mateo Oliveira rode his GAS GAS to his fourth victory of the season. Seven Diaz finished second on a KTM, ahead of the similar bike of Brandy Richards. Mateo Oliveira was so fast he was actually battling with Pro 2 rider Serpa.

“I got into the lead quickly and rode my own race,” said Mateo Oliveira. “The GAS GAS rode super smooth and I was able to get over everything out there. I tried to keep it smooth on the gnarly track.”

Diaz scored his best finish so far this year and his first podium. Bad luck hurt him in the other three rounds in which he competed, so he was happy to get the monkey off his back with the runner-up finish. “I haven’t had the best of luck every round so I’m glad to finally get on the podium,” said Diaz. “I came from racing District 36, which is woods and technical, so I’m really good at that.”

Richards, who also won the Pro Womens race, scored her fifth podium of the season. After another dominant performance in the Womens class, Richards snagged the holeshot and led half of the first lap before falling to third. “The track was a little more difficult and the Pro sections made a little harder,” said Richards. “Yesterday I sprinted a little more but in these two-hour races I definitely had to pace it a little more.”

The second part of the doubleheader motorcycle racing event here is scheduled for Saturday, August 3.