Peoria, AZ – Taylor Robert won his fourth consecutive Pro Motorcycle race during the Rocky Mountain ATV MC WORCS Series Presented by Polaris RZR and Dirt Bike at Canyon MX. Robert led every lap of the race from the gated start, beating out Dante Oliveira. Ricky Dietrich finished third but was penalized for cutting the course during the race, putting Andrew Short in the last spot on the podium.

With temperatures in the low 80s and a nice breeze to keep the dust down, the weather was perfect for racing. The track featured a traditional motocross section, a large sand wash and desert trails surrounded by Saguaro cactus. There were also three additional Pro sections. One dropped through a canyon with rocks. The second one featured tight trails through the brush that featured deep silt ruts, including a 100 yard silt bed followed by 30-foot drop off that went into a wash with rocks and trees.

Robert was ready for the first gated starting line of the season, with previous rounds featuring dead engine starts. After snagging his first holeshot of the season on his KTM, Robert was in a league of his own. Building a sizeable gap for the first two laps, he dialed it down slightly and rode a consistent and smooth pace to ensure the victory.

“I really had a perfect race,” said Robert. “There were a lot of rocks out there so I had to stay on my toes and pay attention the whole time. This was our first gated start of the season and I was able to pull it off. I got my first holeshot of the year which was perfect on this track because I wanted to get ahead of everyone in the dust. I just have to stay healthy for the rest of the year and keep the train rolling.”

Robert appreciated the three Pro sections, especially the drop off. The technical nature of the sections easily split the course into three distinct sections: high speed, technical, and motocross making for a challenging and fun event.

“WORCS has done a really good job with the Pro sections,” said Robert. “It’s going back to the roots of the WORCS style where they throw in a technical section that keeps everybody on their toes and this one was no different. I was having a blast in that section.”

Oliveira continued his run of consistent finishes here astride his KTM. After taking second at the start, he ran literally his own race and scored his third consecutive podium. He may well be the only one with anything for Robert in the points chase as he sits second, 18 points back.

“The course was gnarly and super technical and that made it hard to be consistent this weekend,” said Oliveira. “I rode smooth the whole race and I was by myself the whole time. I want to catch Taylor soon.”

Short was characteristically humble after the race but he added another consistent finish to his resume. Riding a Husqvarna, the third-place effort marked his second consecutive podium and places him third in points. “I struggled, but I did my best,” said Short. “It has to be a disappointment for Ricky, but for me it was the best situation considering. I was definitely afraid of the cactus so that was a new obstacle. The track had a good mix. I improved as the race went on. Overall it’s been fun so far, but it has been a steep learning curve.” 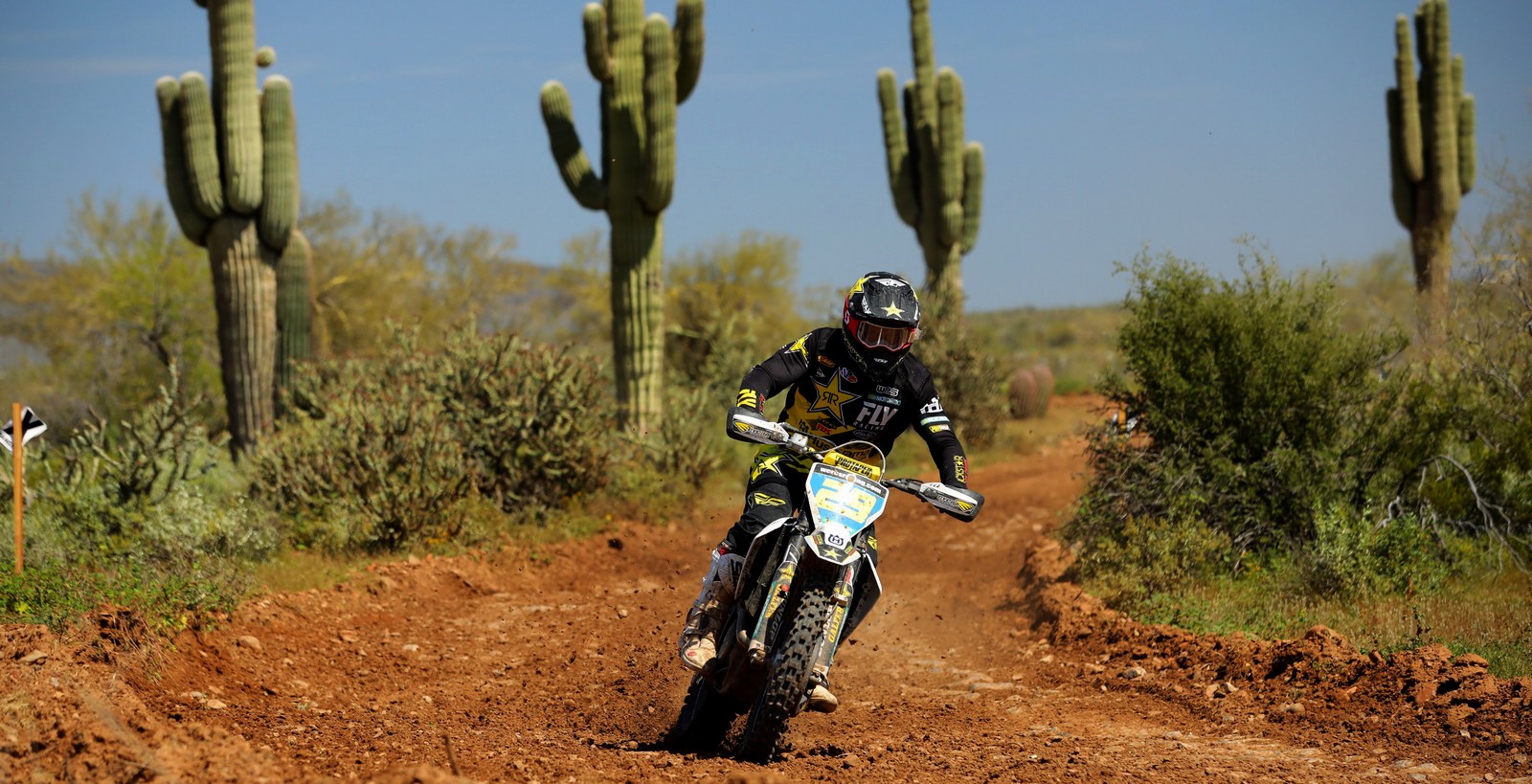 Gary Sutherlin set the second fastest time in Pro qualifying on his KTM, but after setting the lap he cross rutted a section, fell, and his bike landed on him, breaking his foot. He returned to the track in a walking cast but was unable to race. 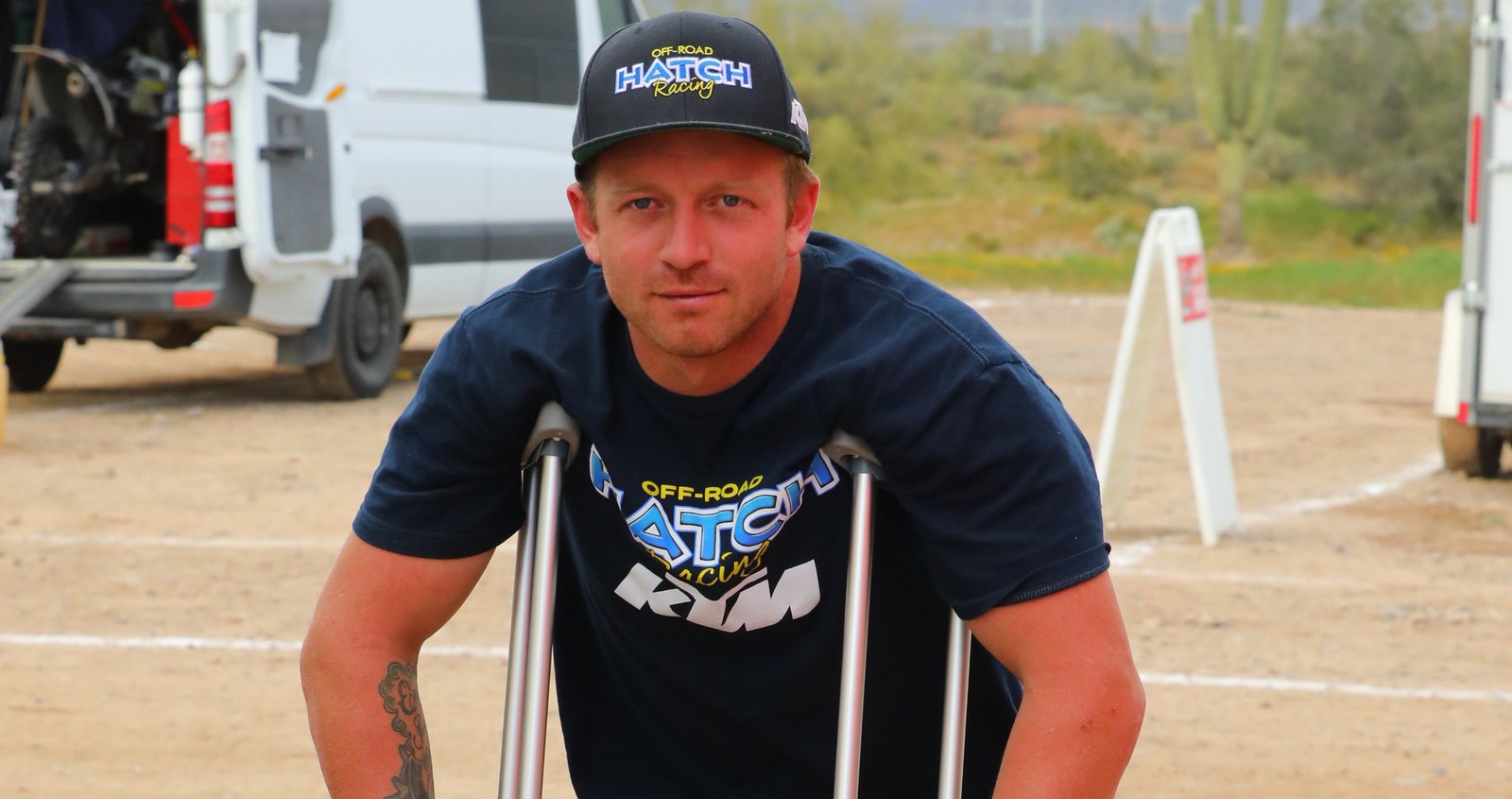 In Pro 2, Austin Walton jumped out front early on his Three Brothers Husqvarna after grabbing the holeshot and left the rest of the field in his dust. Clayton Hengeveld ran a strong second, ahead of JT Baker. The victory allowed Walton to extend his points lead. 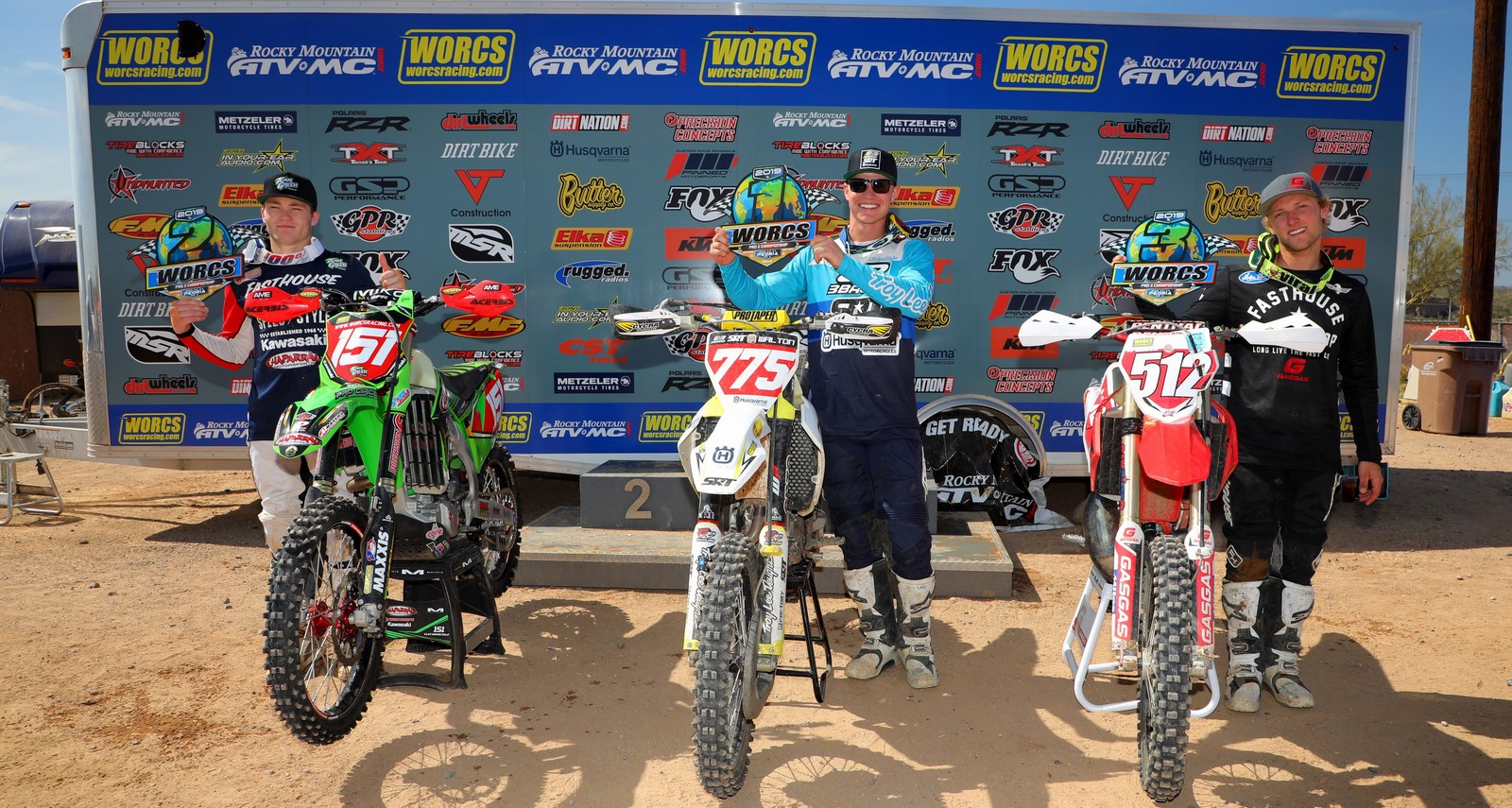 “The track was gnarly and I had to be on my game the whole time, because if I wasn’t something really bad would happen,” said Walton. “Everyone out here his fast, and it’s not easy to do, but I’m happy to get this win.”

Hengeveld, while happy to finish second, was thoroughly beaten and that’s something he doesn’t plan to allow to happen again. His second consecutive podium, along with winning the first round of the season, places him second in the title chase, just two points out of the lead. “I still have some work to do because I got beat pretty good today,” said Hengeveld. “That just makes me want to keep working hard and getting back to winning. He got a good start and I ended up breathing dust. I’ll focus on my starts and that way I can take check out and leave those guys in my dust.”

Baker rode his two-stoke Gas Gas to his second podium of the season. After battling with Robby Schott early in the race, Schott breezed passed him taking third. Shortly after, Schott crashed out of the race, and Baker used his consistent pace to finish third. “My hands and my back are pretty sore, but it was a good weekend,” said Baker. “I just tried to stay up, ride smooth and not make any mistakes. I stayed smooth and ended up third.”

In Pro 2 Lights, Mateo Oliveira won his second race of the season. Thomas Jones was second, ahead of Brandy Richards. Oliveira took the lead early and was never challenged on his Gas Gas. 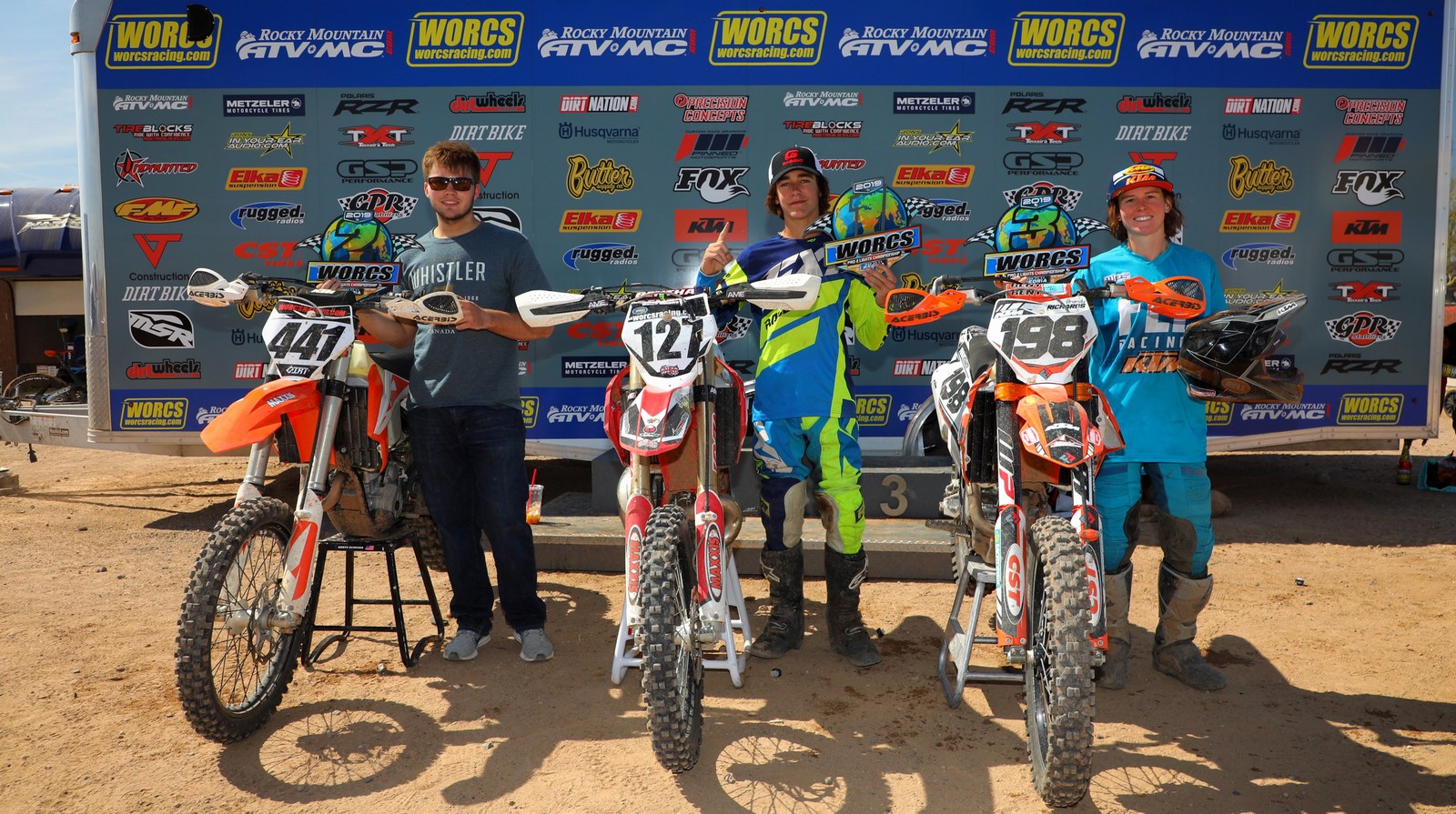 “I got out front early, which is crucial to do here because the dust and the silt beds,” said Oliveira, who moved back into second in points after a falling out of the last race with a mechanical issue. “My Gas Gas ran strong the whole race and I finally put it back in the middle of the box. The Pro section favored my off road riding style and it was fun. It was a true off road race and it was a good track.”

Jones relied on consistency on his KTM. He stayed off the ground, ran smooth laps and scored his second straight runner-up finish. “I got a little arm pump at first, but it went away,” said Jones. “I was just riding smooth. I didn’t want to go down and I didn’t.” 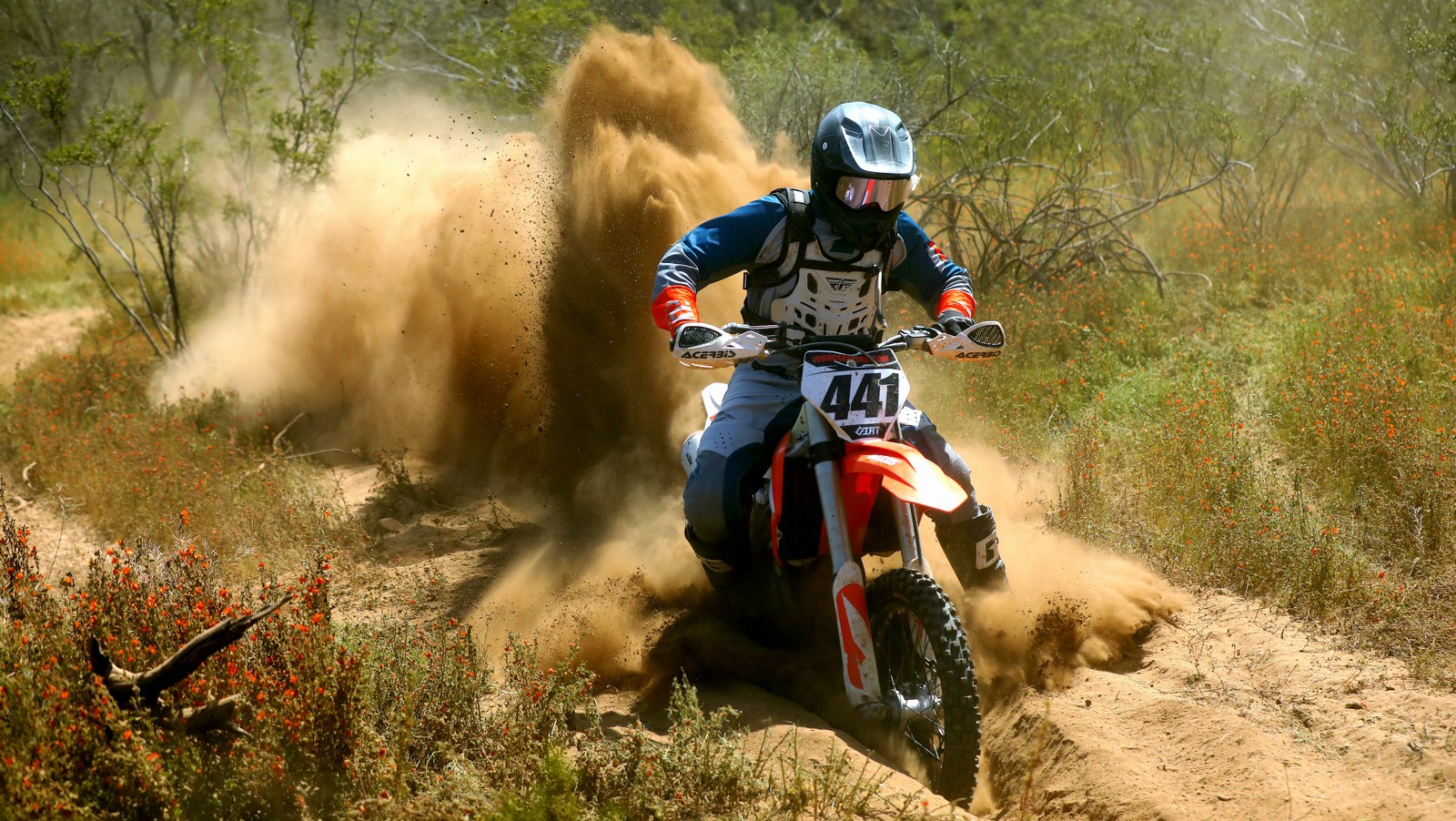 Richards scored her second consecutive podium and third overall in the class this season. Riding a KTM, Richards was second off the start, but fell back several positions on the first lap. She recovered to finish third and extend her lead in the championship to six points. 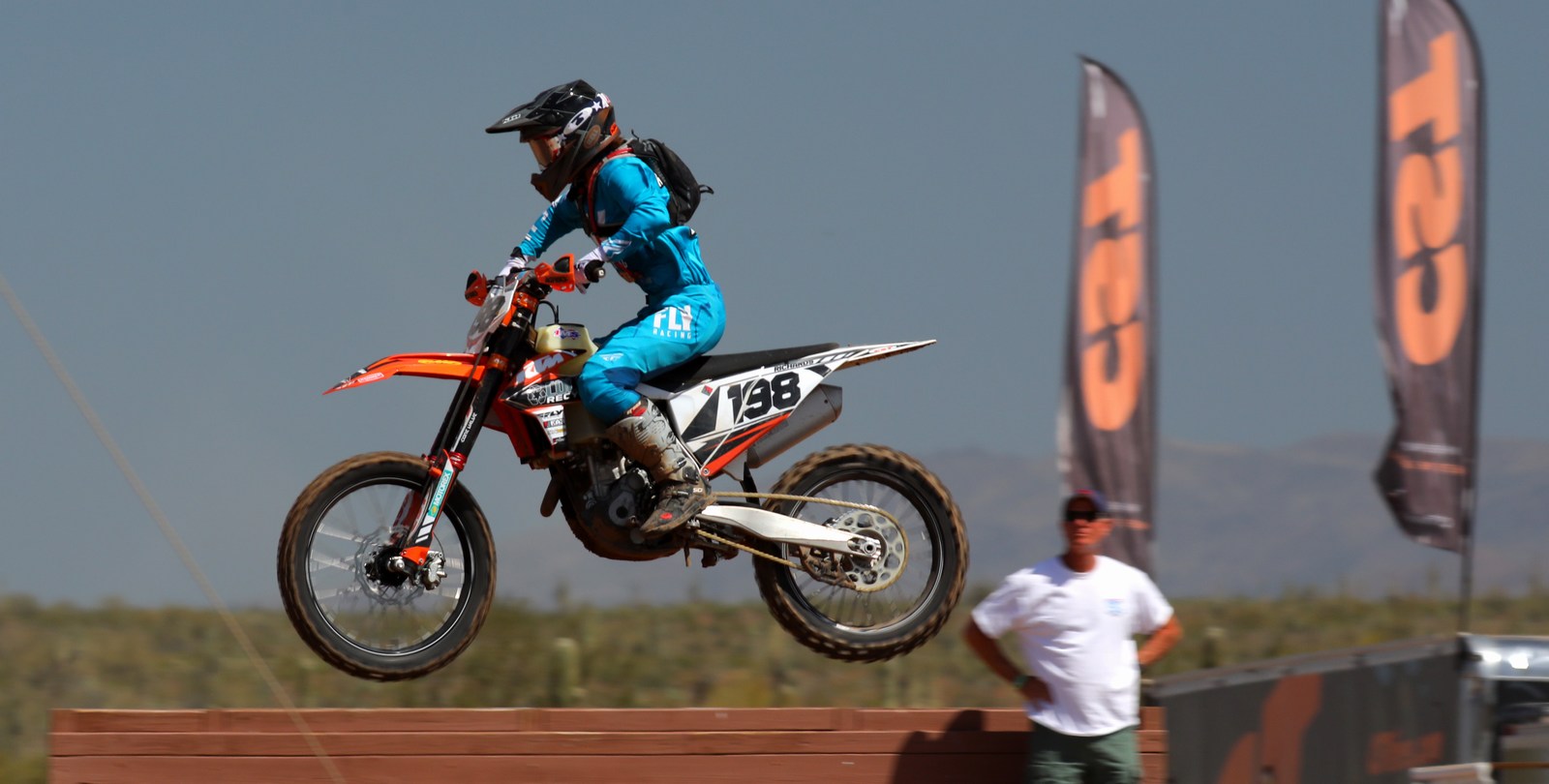 “I only went down a couple of times and I felt really good,” said Richards. “The rock section was really challenging and the Pro sections were a lot of fun. I’m keeping consistent and trying to just move it forward.”

In the Women Pro class, Richards snagged her fourth straight victory. Doing her best Taylor Robert impression in the class, she dominated the race. After taking the holeshot, she caught the class in front of her quickly and ran away with the race. KTM riders Kaitlyn Jacobs and Lauren Woods completed the podium. 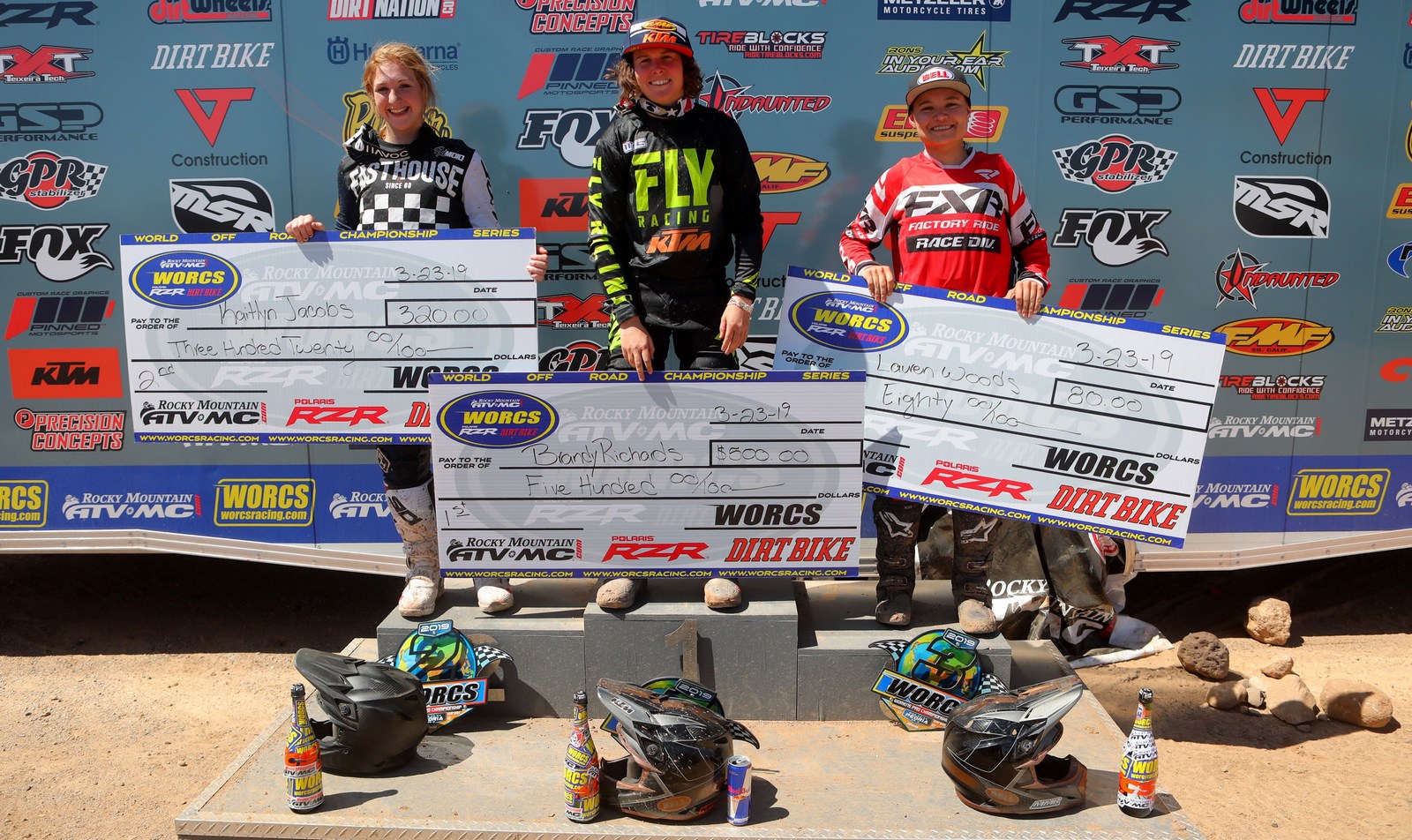 “We have a good Women’s class this year with four of us,” said Richards. “I pulled the holeshot and caught up to the 250 guys quickly so I had to sprint for the first couple of laps. About halfway through I got into a good pace and found some good lines.” 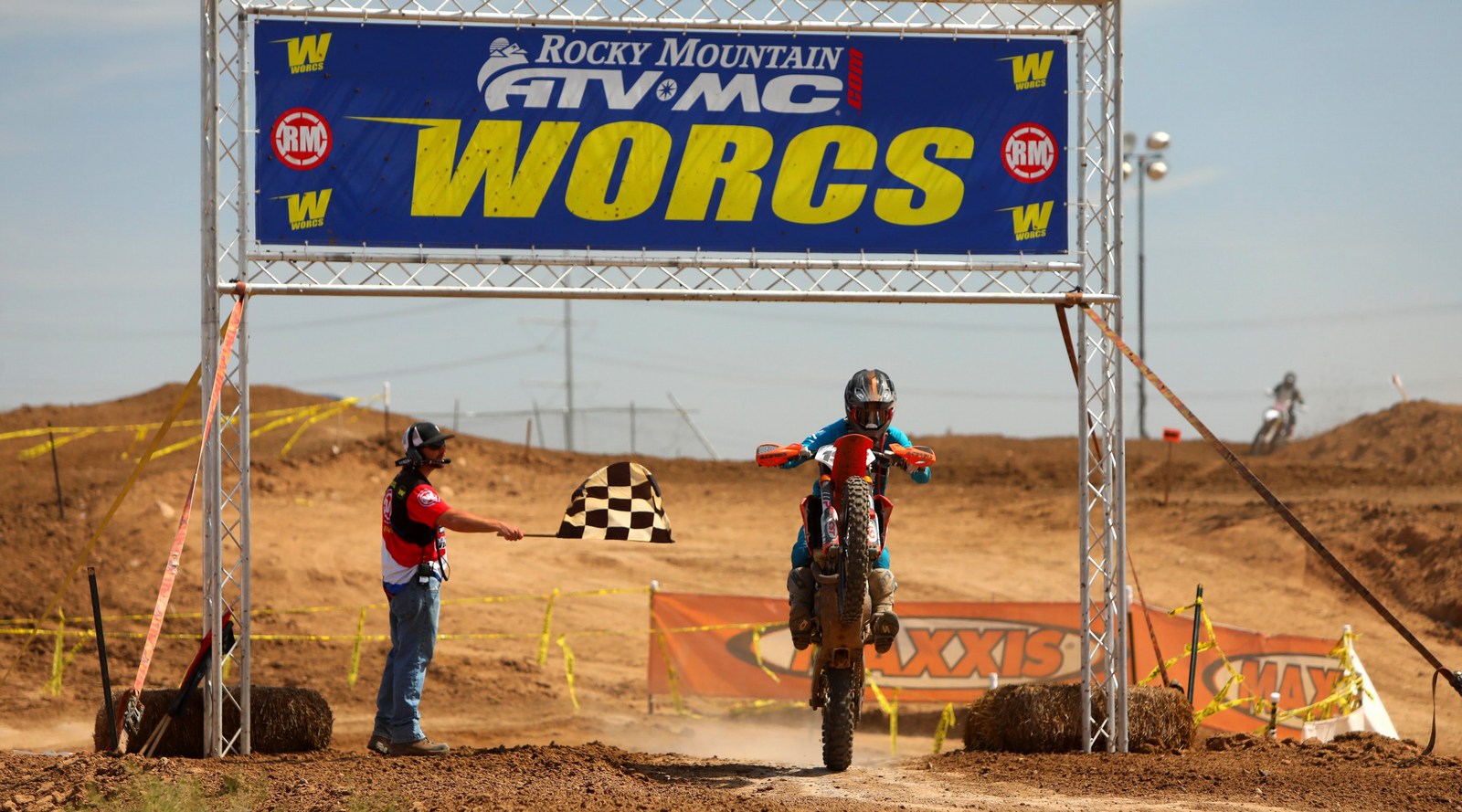 Though she missed the first race of the season, Jacobs is trying to make up for lost time. She scored her third consecutive podium here after a fun race on the rough and technical course. “The course was rocky and rough, but I really liked it,” said Jacobs. “Right now I’m in a good spot, but I definitely want to push for some wins.”

The next race will be held at the WORCS Series’ most unique venue: The Orleans Arena in Las Vegas, NV on a combined weekend with the ATV and SXS classes. That race is scheduled for April 13-14th.