The true nature of an organization is rarely seen until under duress and the event the new WORCS organizers. They reacted perfectly at every turn, despite many adverse issues during the weekend. Blizzard conditions to the north the week before the race caused havoc for competitors trying to get to the race, but despite the weather, a record number of entries were on hand for both the ATV and SXS classes.

High water also forced organizers to change the course from year’s past. It still included the famous lagoon jump, which took its usual toll on the field. The rest of the course, though tighter due to space constraints, was universally praised and made for great racing. Finally, a change to the schedule was made to allow the Pro classes to run standalone races without other classes on track. This was done after lapped traffic caused issues in the last race and it made a big difference.

The SXS Pro race was run on Saturday. The cooler temperatures were advantageous for the turbocharged cars and Bradbury made full use of his Polaris RZR Turbo S. After taking the holeshot from the front row, he sprinted for the first two laps and gapped the field. From there, he backed it down slightly and cruised to victory.

“I got a good jump, took the holeshot, and ran flat out for a couple of laps to see what I could do,” explained Bradbury. “I opened up a good enough lead that I stopped jumping the lagoon jump and played it smart. The layout was different; It had a lot more turns and it was much tighter. I was running the wider Turbo S this weekend so I was a little worried, but I got such a good jump it didn’t matter. Two races in I can’t complain. I have a third and a first so I should have decent points coming out of here.”

Baron frankly was just happy to be able to compete after a lapper punted him in the last race and virtually destroyed his Polaris RZR RS1. After spending countless hours and several thousand dollars in repairs, he was back and in perfect form. After starting on the last row, Baron picked his way through the field and made several passes to secure second at the finish. 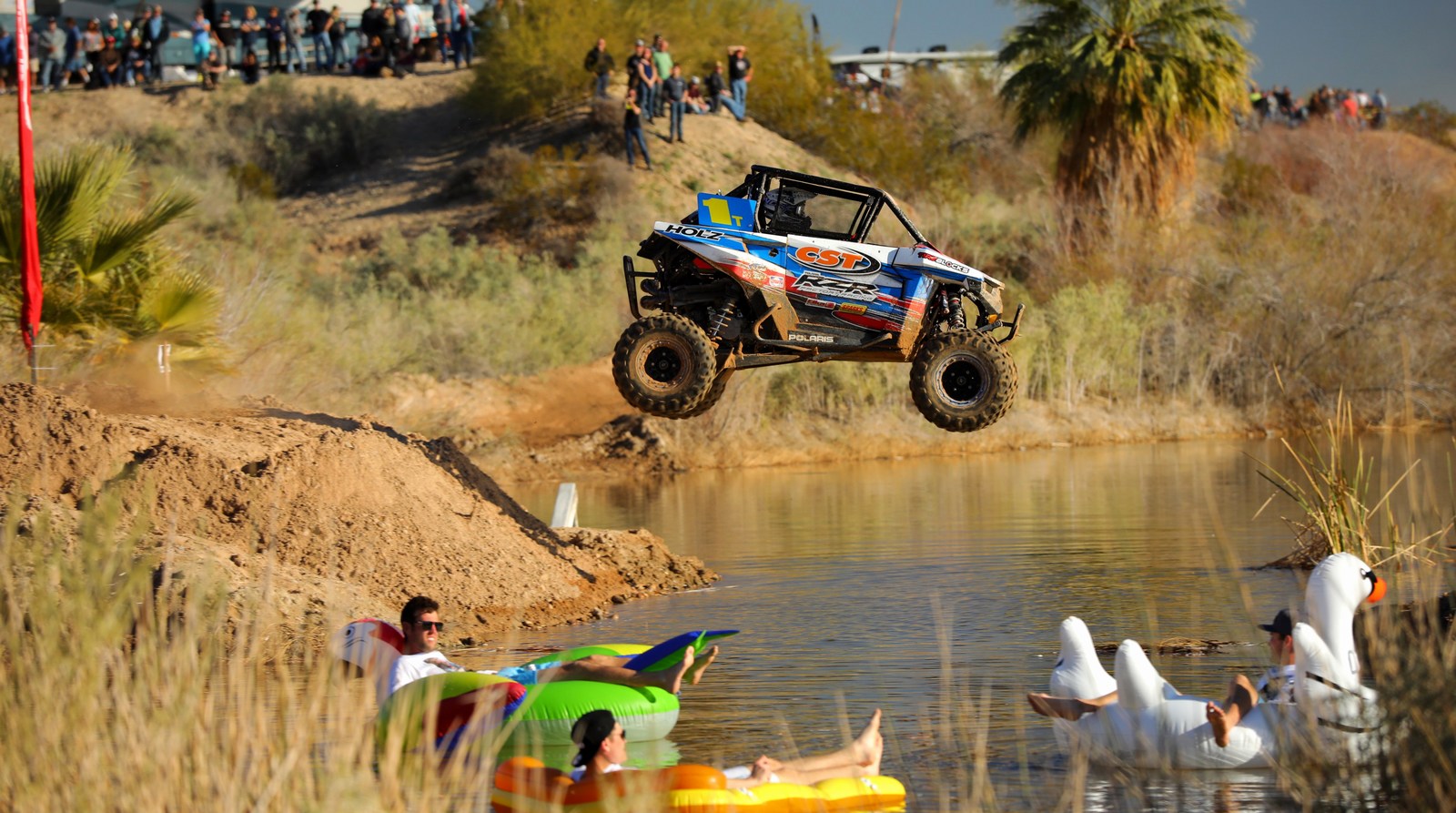 “I didn’t get taken out by a lapper so I’m pumped,” laughed Baron. “I have a solid 60 hours rebuilding this car so I’m stoked that first of all, it ran and secondly, that it got me good results. Coming from the last row was difficult because I was behind someone the entire race just getting roosted. The course was really tight and it was super hard to pass. I just tried to pass one at a time. Some laps I got lucky on the lagoon jump and others I passed them on the moto track.”

Judge made his first start at the legendary Havasu facility, driving a Can-Am Maverick X3. The weather delayed shipment of his shock package, so he had to run his short course setup. While it worked well in practice, the race was a different story. He also had issues with his front drive and finished the race in third in two-wheel drive. “We had some car issues, so to finish third in two-wheel drive is amazing,” said Judge. “It was a good points day and we’ll keep going forward.”

The Pro Stock race was held on Sunday, and series officials found themselves in another situation and the decision they made was again the exact right move. Leaverton took the lead from the front row with Baron in tow, while Bradbury charged into the lead on adjusted time from the second. A crash two laps in forced officials to stop the race. During the one-hour delay while the track was regraded, officials took the times from the last completed lap and staged everyone on time order, making for a race to the finish on position. 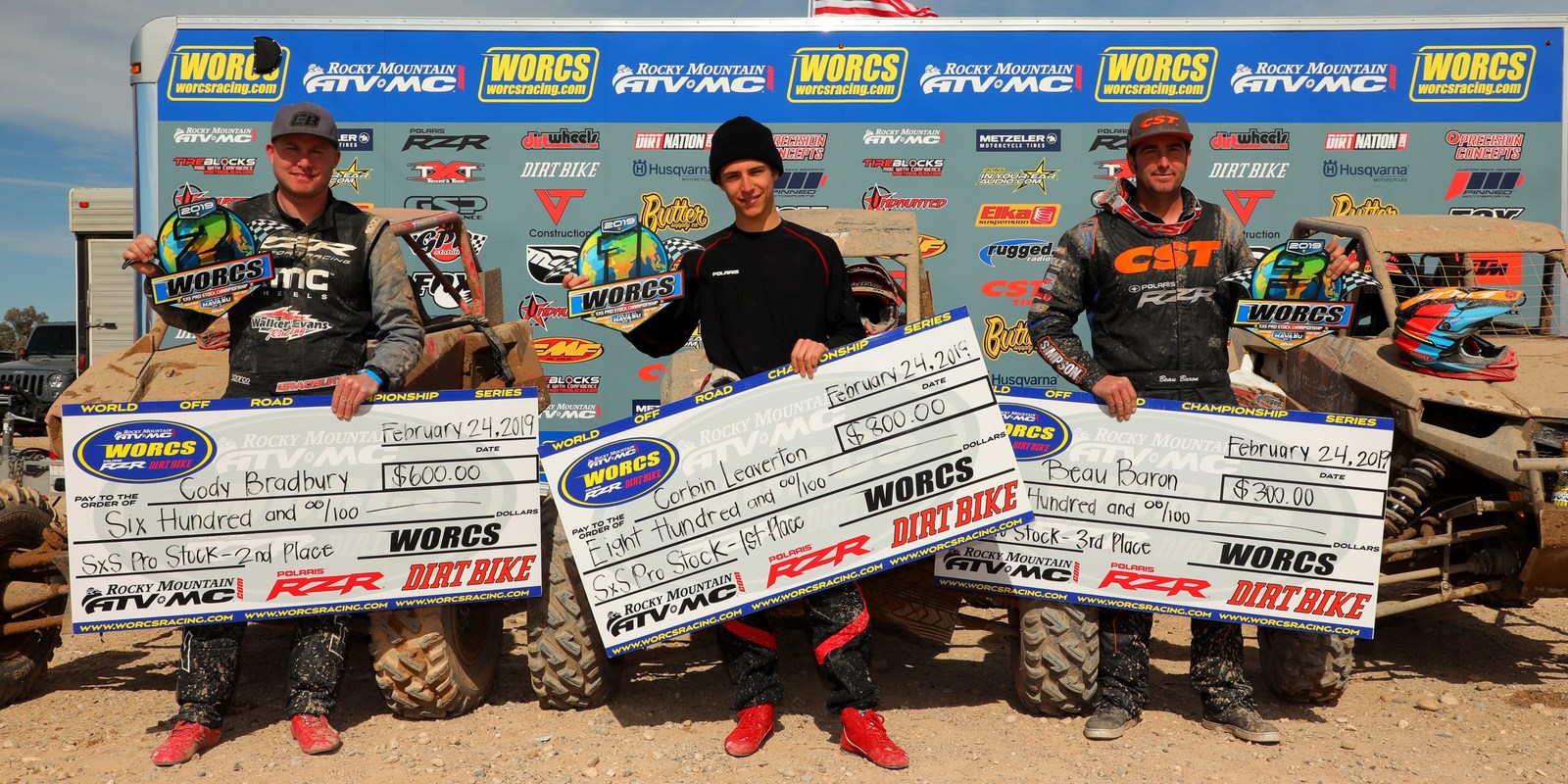 This put Bradbury first, ahead of Leaverton and Baron. On the restart, Bradbury and Leaverton checked out in an intense battle for the lead. They swapped the lead several times. Bradbury had brake issues in the closing laps handing Leaverton the lead. Bradbury made a last-ditch move on the final lap by jumping the lagoon jump, but finished a close second. Baron was third. It marked the second consecutive race that Polaris RS1s swept the podium.

“I got the holeshot, tried to pace Beau behind me and run a smooth race,” said Leaverton. “Cody was catching me on time and they red flagged the race. So we lined back up and Cody was leading. We went back and forth and I’m pumped to come out of here with a win. The RS1 and Holz got it done for us today. Polaris makes a great car and Holz makes it even better.”

Bradbury fought hard to regain the spot from Leaverton. Though he had no brakes on the final lap, Bradbury didn’t hang back when he saw a shot at re-taking the lead. He hit the lagoon jump hard and nearly re-took the spot for the victory, coming up just short.  “I started on the second row and got up to fourth physically before the red flag,” said Bradbury. “On the restart, I came out first. We just battled from there and it was a fun race. I had brake issues with a lap to go, so I elected to finish second, but I did the lagoon jump on the last lap and that made it really close.”

Baron tried to hang with Bradbury and Leaverton on the restart, but he elected to back it down to save his car, waiting for one of them to falter. That didn’t happen, and he finished third, though he unofficially took the points lead with the podium finish. He credited WORCS officials for making the right move on the restart. 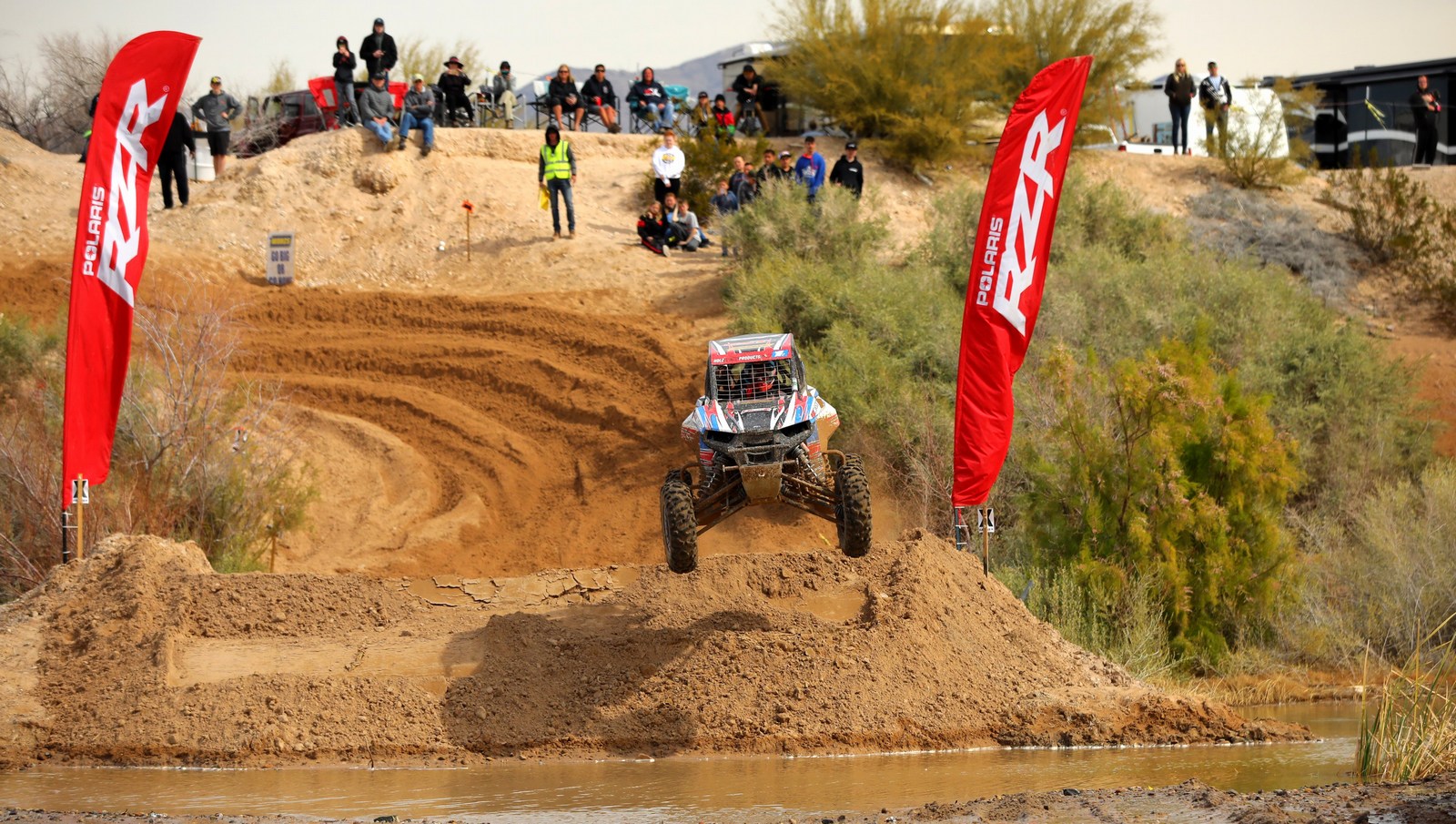 “At first I tried to push it to try to stay with them, but I was worried about breaking my car,” said Baron. “So I backed it down a little bit and hoped one of them would break. The lagoon jump was gnarly today. Some of the laps it was faster to go around it because the mud was so bad on the landing. The restart was completely fair. I’m stoked they made that call.”

The WORCS SXS classes next head to Peoria, AZ to race among the Saguaros at Canyon MX. That race is scheduled for March 15-17.