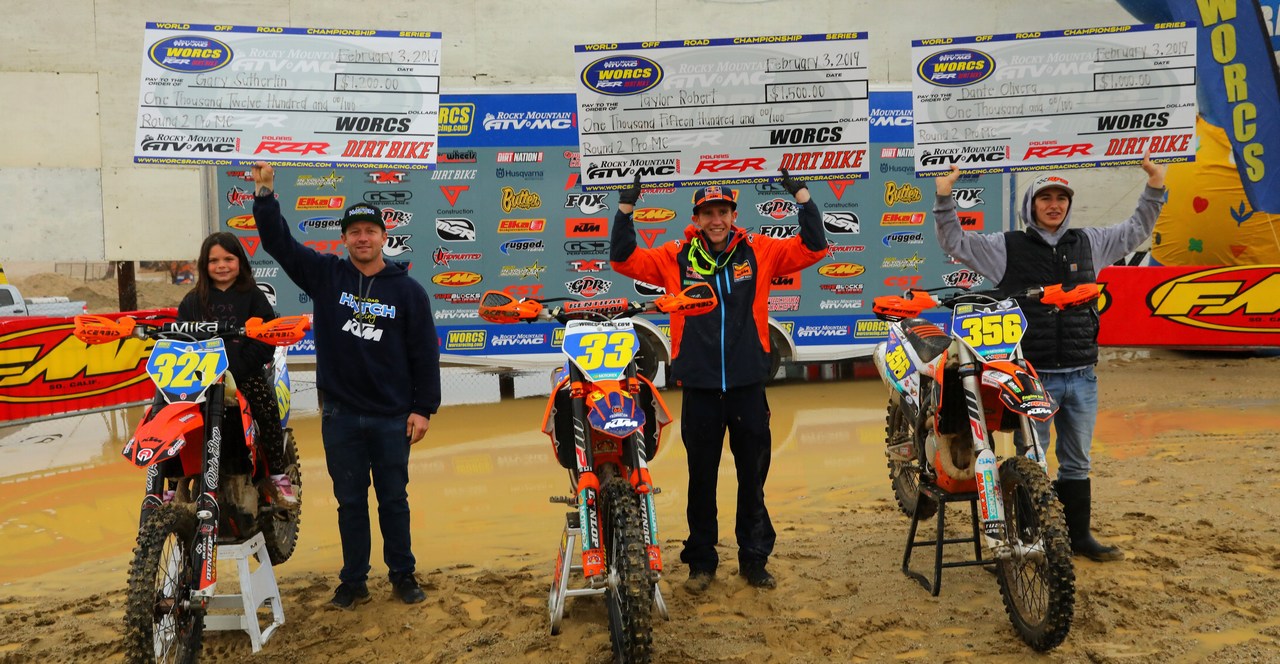 Heavy downpours hit the Southern California track early on Saturday and they did not let up, with steady rain falling throughout the Pro events on Sunday. WORCS officials did an impressive job to keep the show going, even after the main road into the facility flooded, forcing them to utilize a back road into the track. The track was changed to suit the conditions, but most of the off-road sections were still utilized, and the race ran its two-hour time.

In the Pro race, Robert got a late start, but was quickly making his way through the field. He took the lead for good from Sutherlin late on the first lap and went on to snag his second victory in as many races. Despite the puddling water on the track, clinging mud and even a straightaway that looked more like a river, Robert held strong for the win.

“It’s been a long time since I’ve done a muddy WORCS race and it was fun to change it up a little bit,” said Robert. “You had to be smart in traffic and choose the right lines through the terrain. There was so much water sitting on the track that you couldn’t see which of the puddles were deep or not. It was kind of the pick-and-pray method. In these conditions, I’m glad my bike held up and I didn’t have any issues all race.”

Sutherlin took the lead off the start, but visibility issues hampered him on the first lap. After surrendering the lead to Robert, he ditched his goggles and stayed with Robert until the end. An attempted charge for the victory on the final lap was thwarted by a bottleneck, but after having issues in the first round, Sutherlin was glad to bounce back here with a podium. 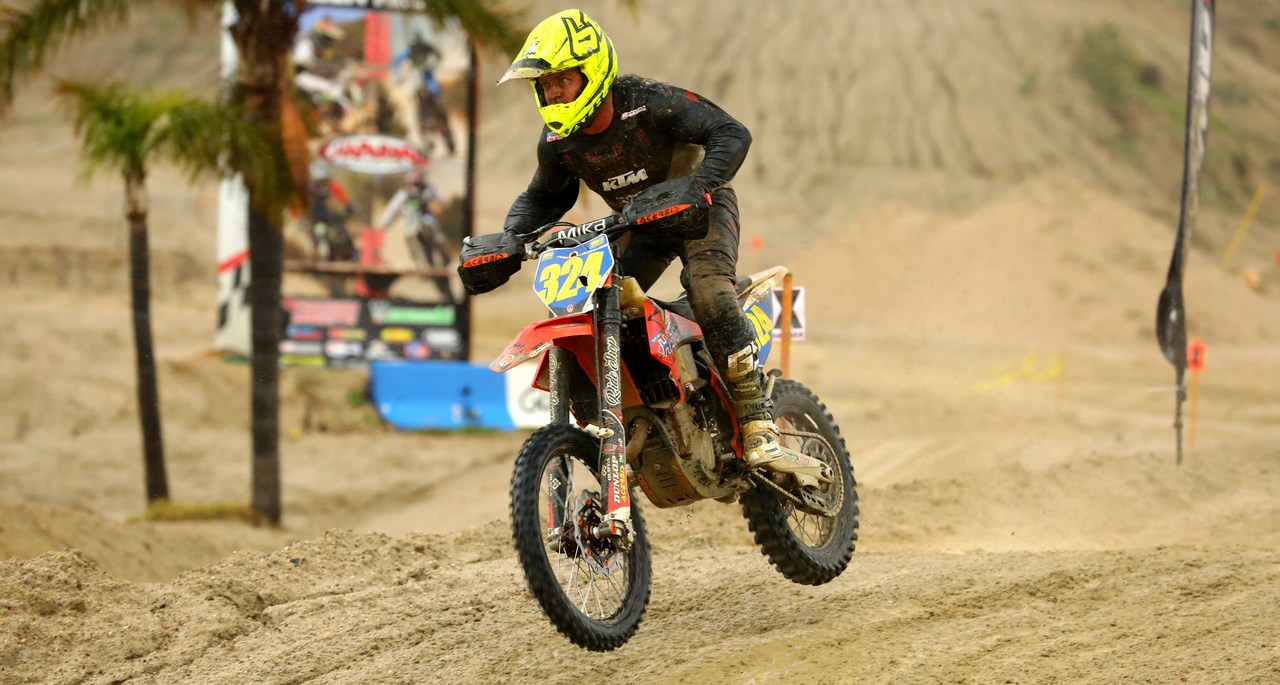 “It was a bummer not to be able to fight for the win on that last lap, but I’m happy with the finish especially after the first race,” said Sutherlin. “I closed the gap with one lap to go and tried to push. Unfortunately, the track had deteriorated so much that I got stuck in a bottleneck in a mud hole. I’m just looking forward to getting this rolling and move on to Havasu.”

Oliveira ran a conservative pace on the first few laps before snagging third on lap three. From there, the Northern California native used his mud race experience to his advantage to hold onto the final spot on the podium, his first this season and the second of his Pro career. “I chilled out the first few laps,” explained Oliveira. “A couple of guys gapped me, but I was able to creep back in through some of the tighter sections on lap two and three. I took third on lap three and just tried to stay off the ground. The rain was gnarly, but I’m from NorCal, so I’m used to the mud. It actually worked to my advantage.”

In Pro 2, JT Baker took the lead at the start on his 2 Stroke Gas Gas, but the conditions nearly took him out of contention. After sucking in water in the off-road section his bike sputtered and he lost the lead to Austin Serpa. On the final lap, Serpa was held up momentarily in a rut, and Baker went for it, charging into the lead and going on to victory. Serpa was second on a KTM, followed by the Husqvarna of Noah Kepple. 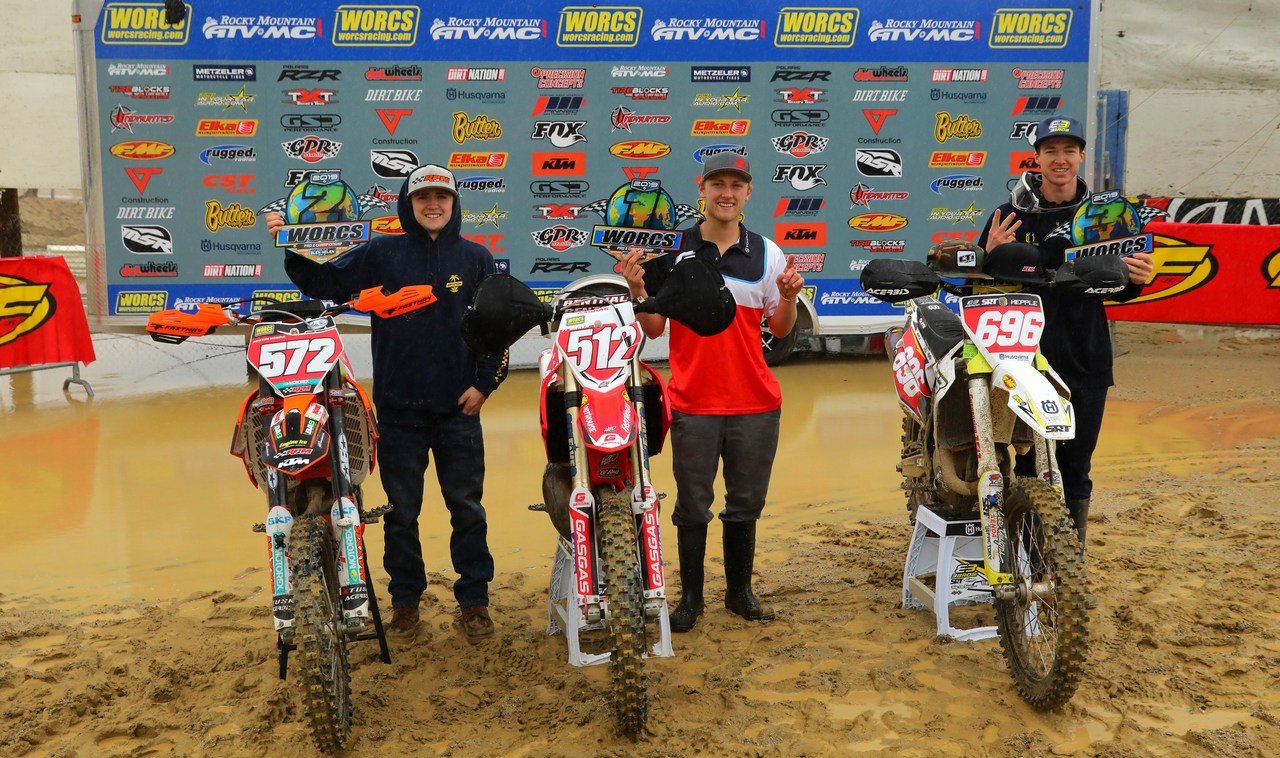 “Toward the end I sucked in a little water, and it stalled a couple of times; that’s how I lost the lead,” said Baker. “I had to re-kick it and I started charging from there. I grew up riding in the mud, so I’m used to mud races. The 2 stroke is better in the mud because it slides around a little more and you can work it. On the last lap, there was a bottleneck in the ruts so I stuck it in, just went wide open and got it.”

Serpa ran out of tearoffs on the third lap so he ran the balance of the race with no goggles. Despite the visibility handicap, he nearly had the victory in the bag, before losing the spot on the final lap. “I worked my way up to second on the first lap and stayed there until just after halfway,” said Serpa. “JT had an issue, so I got by him and led the rest of the way. I got stuck in a rut on the last lap for three seconds and that was enough for JT to get past me.”

In Pro 2 Lites, Australian rider Will Riordan turned his WORCS debut into his first series victory. Riding a KTM, Riordan took the lead on the third lap and held it until the end. Mateo Oliveira was second on a Gas Gas, ahead of the KTM of Tyler Toline.

“Off the start I was third,” said Riordan. “I battled for a couple of laps before I got the lead and just held it until the end. We made it through the rain. These were definitely the wettest conditions I’ve raced in, but it was good fun.”

Robert now holds a 12-point lead in the Pro class, ahead of Dante Oliveira after two rounds of racing, and the WORCS Motorcycle series heads next to Lake Havasu City, AZ for round three of competition, scheduled for March 1-3.