Primm, NV  – In a near-repeat of last year’s season opener, Ronnie Anderson came out charging on won both the Pro and Pro Stock SXS races during the Rocky Mountain ATV MC WORCS Series presented by Polaris RZR. The race was held at Buffalo Bill’s Resort and Casino.

For the season opener, there was an impressive 540 total SXS entries, which wasbeing held on a brand-new mx track built for the weekend. The entry list was certainly a WORCS SXS entry record, and with nearly perfect weather and expert track preparation, dust wasn’t an issue. The events were lengthened by 10 minutes this year, causing some head scratching when it came to fuel mileage.

In the Pro race, Anderson, driving a Polaris RZR Turbo S started on the third row, but quickly made his way through the field to score the victory on adjusted time. He beat out Cody Miller, who was making his series debut in a Can-Am Maverick X3, by just two seconds. Bradbury finished third in a Polaris Turbo S, while Hunter Miller and Sierra Romo rounded out the top five.

“It feels to put a Polaris RZR on top in both classes today,” said Anderson. “It was a hard-fought battle today. I was trying to conserve fuel the whole time. I was running P2 or P3 and I just barely made it across the finish line on fuel.”

Cody Miller rejoined his brother Hunter this year under one tent. With Racer Productions nixing of SXS racing in GNCC, the Millers are running factory-backed Can-Am Maverick X3s in WORCS this year, and Cody ran a conservative pace and came out with a podium in his first start.

“I was really babying the car because of some of the noises I was hearing, but it was just rocks getting chewed up between the wheels and the calipers,” said Cody Miller. “We learned a lot this weekend and we’re going to make a couple of adjustments. We both ran conservative races and came out of the first race of the season with some good finishes. It will get better from here.”

This was the Miller brothers first WORCS race and the SXS phenoms were impressed by what they saw. Along with the entry list, Cody Miller appreciated the attention WORCS officials pay to the SXS classes. “It’s a very well-run organization and I really like the support they have out here for SXS racing,” said Cody Miller. “We had 540 entries this weekend not including ATVs and that was extremely impressive. My brother and I felt like we fit right in.”

Cody Bradbury finished first physically and third on adjusted time in his Polaris. Bradbury ran the first two laps at a torrid pace and then backed it down to try to save fuel. Unfortunately, a miscalculation on mileage forced him to make a late stop and that put him third at the finish.

After quickly moving through the field Hunter Miller had made it up to second from his fourth-row start. Contact with a lapped car, however, broke an axle on his Can-Am Maverick X3, and he had to finish the race in two-wheel drive. The fourth-place finish does put him on the front row for the start of the next race. 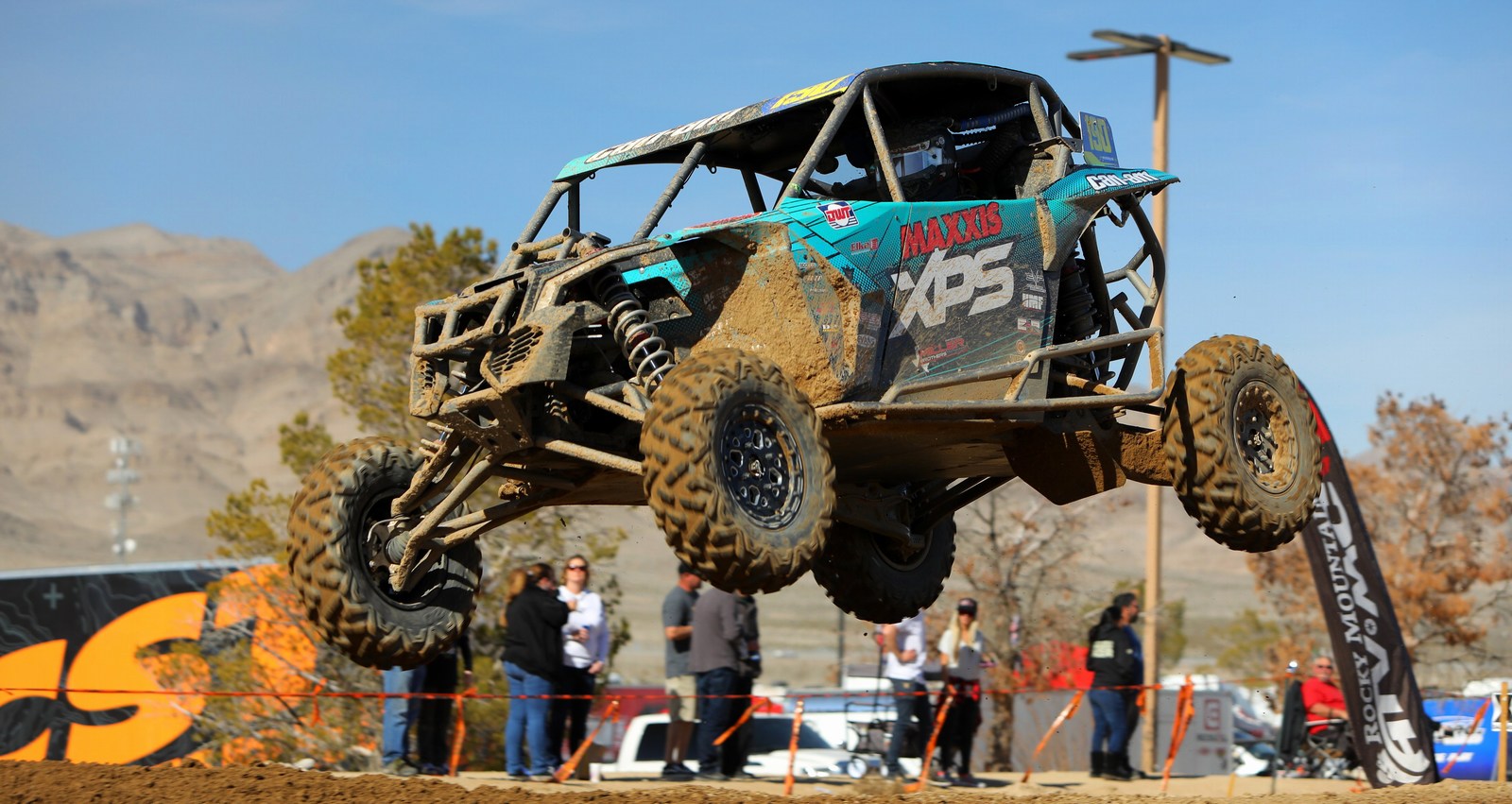 Sierra Romo showed she is gaining confidence in her Holz Built Polaris RZR as she was running top five in both Pro races, and she held on to finish fifth on Sunday in the Pro racing running a non-turbo RZR. 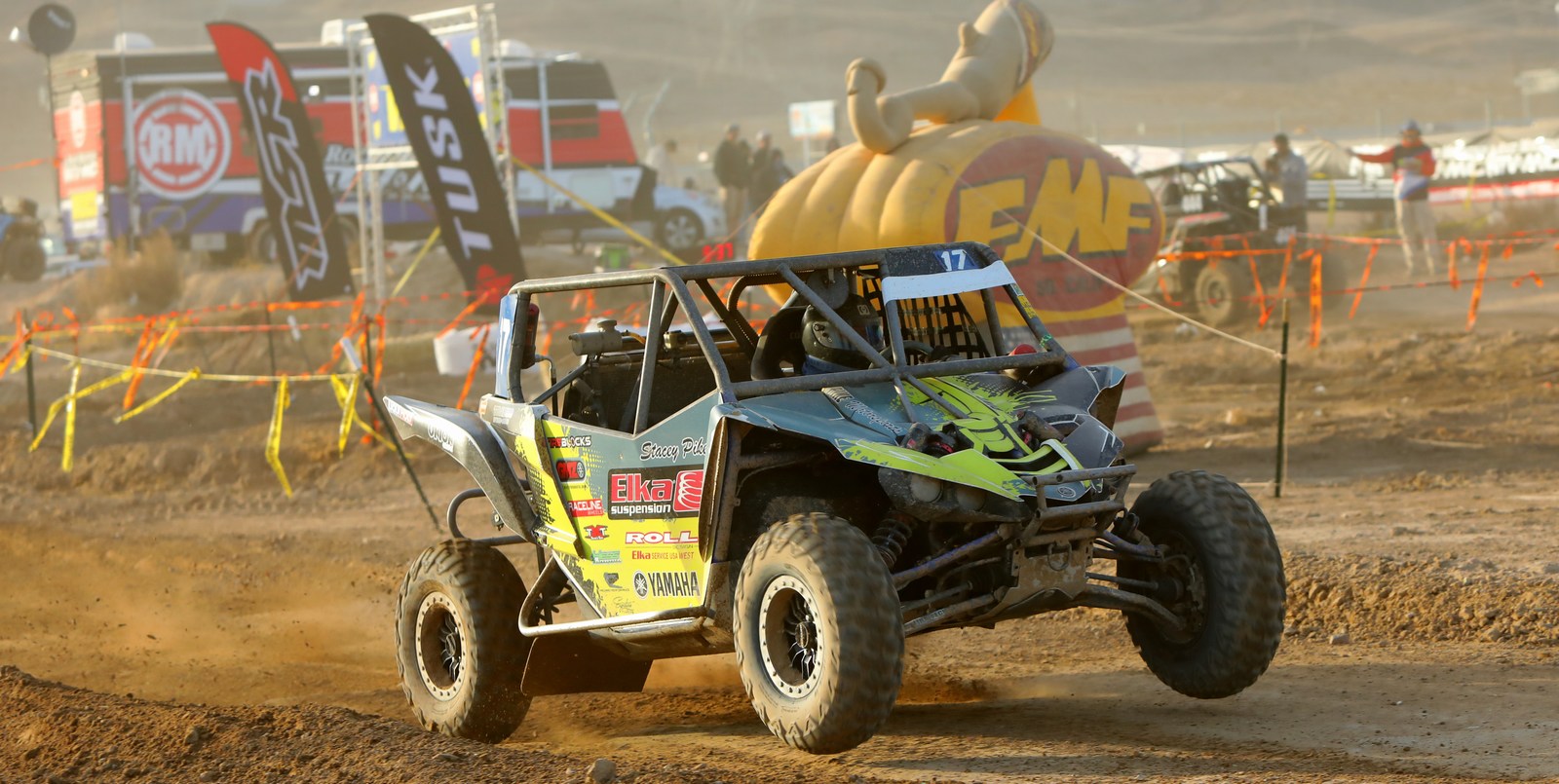 In Pro Stock, Anderson again won the race, but this time he led a parade of Polaris RZR RS1 single-seat machines across the finish line. Polaris’ new compact SXS cars swept the podium as Matthew Hancock finished second, followed by Baron. Stacey Pike was fourth in a Yamaha YXZ 1000R, ahead of the Polaris of Dean Wheeler.

“I’m super pumped to have my teammates switch over to RS1s and then sweep the podium,” said Anderson. “I think a lot of people were skeptical when the RS1 was released because it’s a lot shorter and has a narrow wheelbase. Then I won all but one race I entered with it last year. I can’t wait to see what this year holds for Polaris.”

Anderson again started on the fourth row and knew he had to charge early to ensure he could avoid heavy traffic. He made his way past several flipped cars on the first lap and went on to victory. “I ended up on row four, so I had to pick up as fast as I could,” said Anderson. “There were cars flipped over everywhere so I was dodging and trying not to get stuck behind people. I had to play it smart and it worked out for me.” 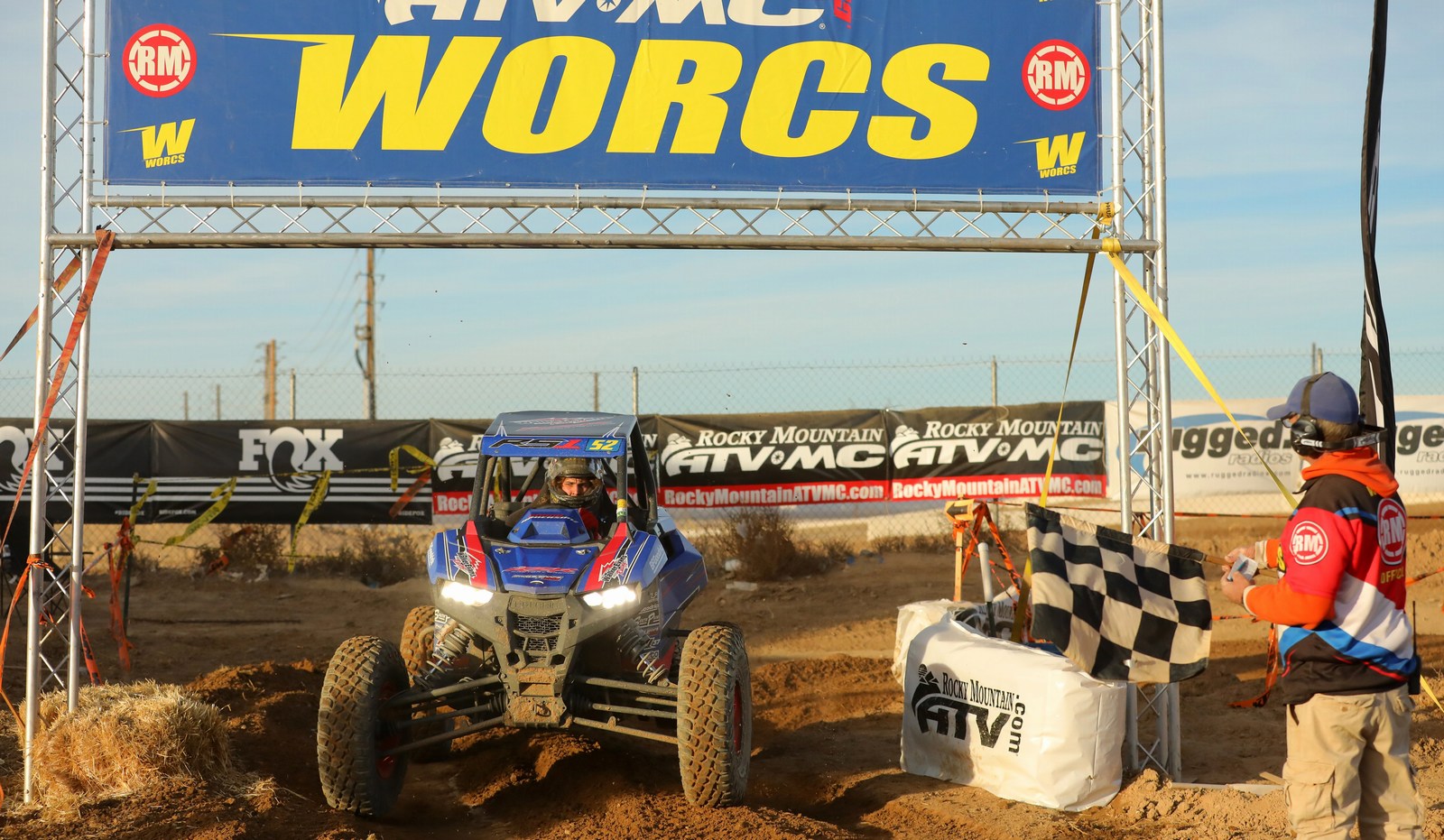 Hancock had only two miles on the odometer of his RS1 before getting to the track so he ran his first laps in the car in Friday practice. It was perfect right out of the box as Hancock snagged the holeshot and finished 43 seconds behind Anderson at the finish.

“I knew Ronnie was going to be fast and the field was stacked today,” said Hancock. “I was nervous because the first time I really drove the RS1 was in practice yesterday, but the car was dialed when we got here. Three of us are up here with no testing so it just shows how good these RS1s are right out of the box.” 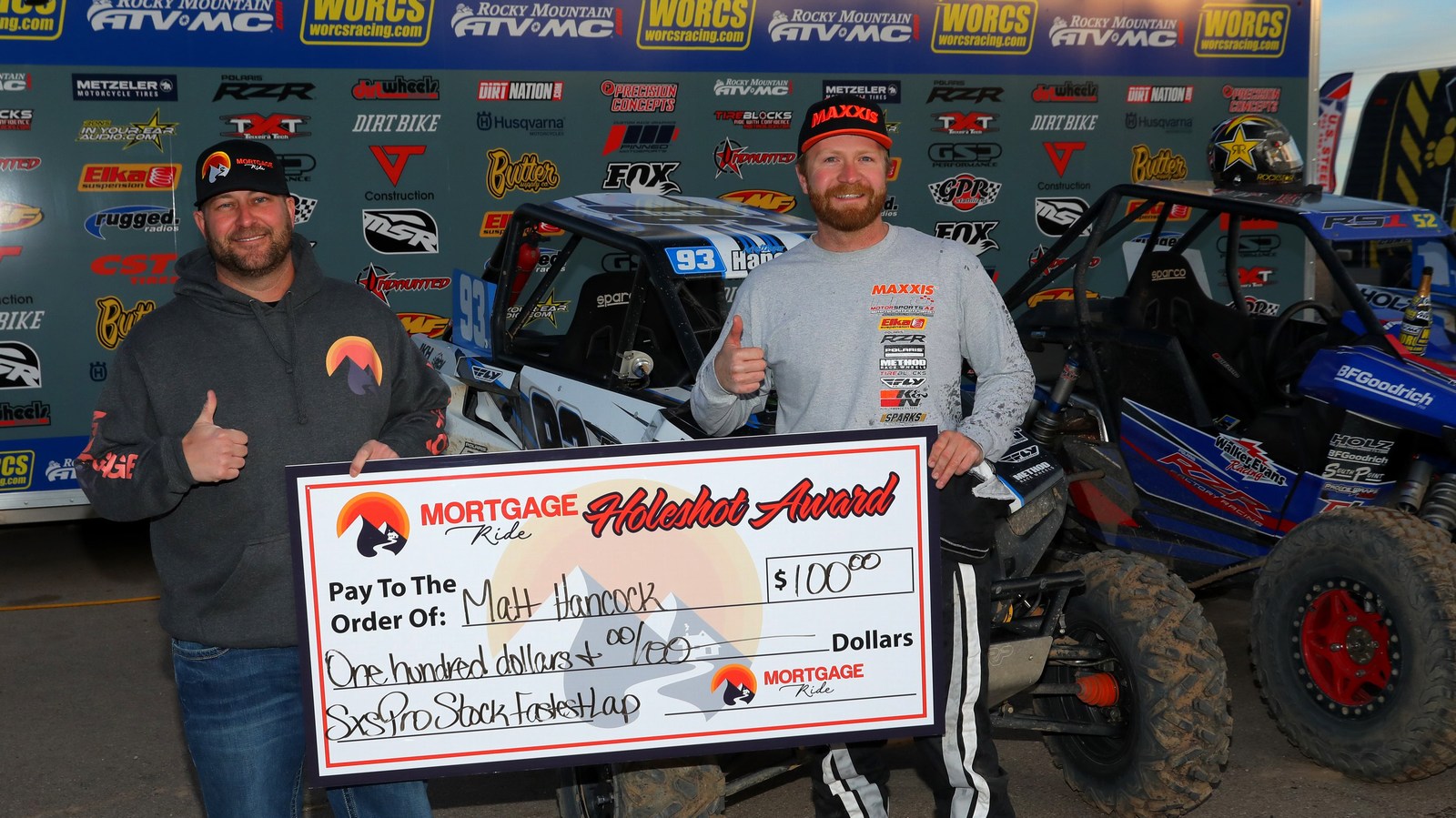 Baron also overcame teething issues with his RS1. After nearly tipping over in practice, he changed his wheel offset to widen the machine’s stance. Once the track rutted up, Baron’s car was fast, and battled with Nic Granlund before Granlund flipped his Yamaha. Baron caught Hancock, but ran out of time and finished four seconds behind him in third.

“After I passed Nic, I caught up to Matt really quickly,” said Baron. “I knew Ronnie had us on time, so I ended up third, which isn’t a bad way to start out the season. This was the first time I had every driven a single seat car. I went out in practice and decided I needed a wider wheel offset, so I changed it before the race. On the second lap, I got comfortable and I started ripping it.”

The next race for the WORCS SXS classes is being held February 22-24 during Spring Break weekend in Lake Havasu City, AZ.