Mesquite, NV – Taylor Robert proved he has just about fully recovered from a hard crash midway through the season by dominating the Rocky Mountain ATV MC WORCS Series presented by Toyota and Dirt Bike Pro motorcycle race at Mesquite MX. It marked Robert’s fourth consecutive victory and his fifth this season.  Giacomo Redondi finished second, padding his lead in the championship, ahead of Zach Bell.

Unseasonably cool temperatures in the low 80s made for perfect racing weather. The track is a favorite among competitors and it featured a clay hard pack motocross track with several big jumps. The desert off road section ran in the deep soft sand adjacent to the Virgin River. As the race went on, the track quickly whooped out making for a technical challenge for the riders.

Robert snagged the holeshot at the start of the Pro race on his KTM and he dominated from there, leading every lap. He enjoyed the challenge of the deep sand and ruts and was happy to be in much better shape physically.

“I really enjoy that off road section,” said Robert. “It’s just so nasty and you have to fit to go fast because it’s no joke. You have to be really smart with your lines and that’s fun. I felt a lot better this weekend and I was a lot healthier than the last race. I haven’t touched the ground since Glen Helen, so I’m going to try to keep it that way.” 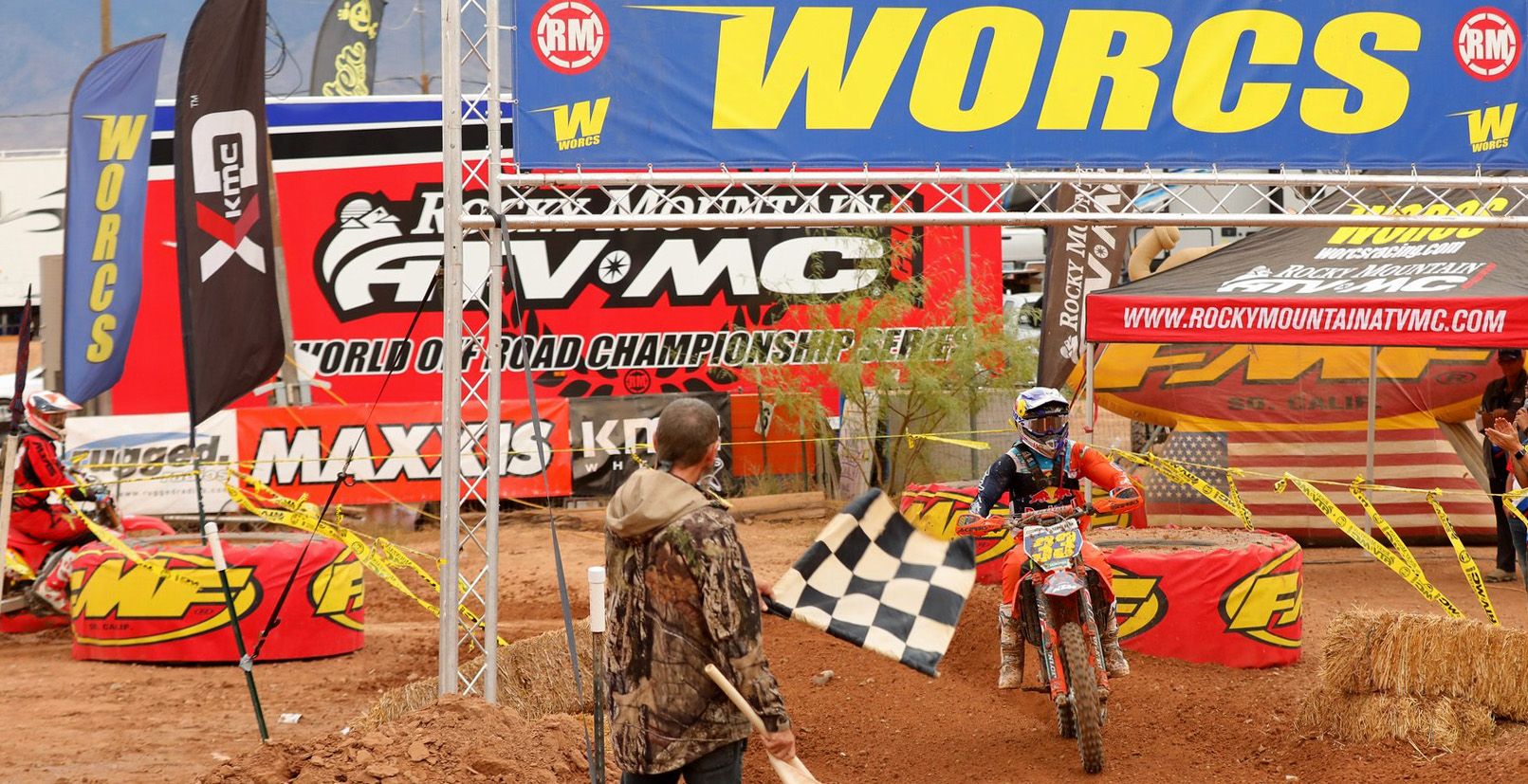 Redondi started fourth on his KTM, but quickly moved to second. Though he had nothing for Robert, he was pleased with his fifth podium of the season and his continued run at the top of the points charts with just one race left in the season. “Taylor is the man to beat, so I was happy to be much closer to him and get some good points for the championship,” said Redondi.

Zach Bell nursed mechanical problems on his Husqvarna throughout the event. Though he couldn’t make full power on the bike, he made full use of his talent, landing on the podium and keeping his championship hopes alive. 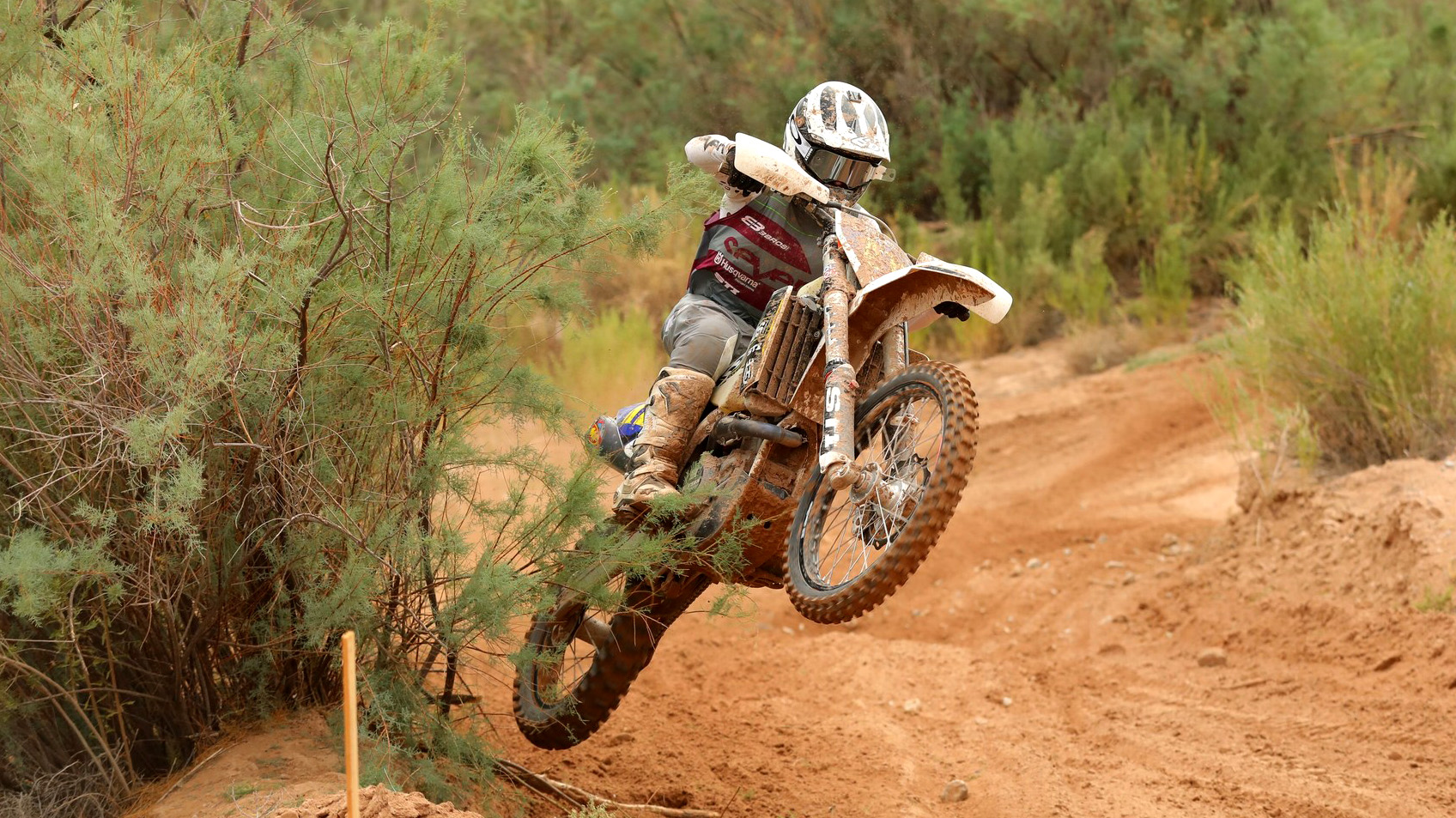 In Pro 2, Tallon LaFountaine earned his first career WORCS victory. Clay Hengeveld finished second, followed by Mitch Anderson. LaFountaine, who is in his rookie year in the WORCS Series on a Husqvarna, rode from the back to finish second in the 450A class earlier in the day and that helped him find the productive lines on the difficult track during the Pro event. 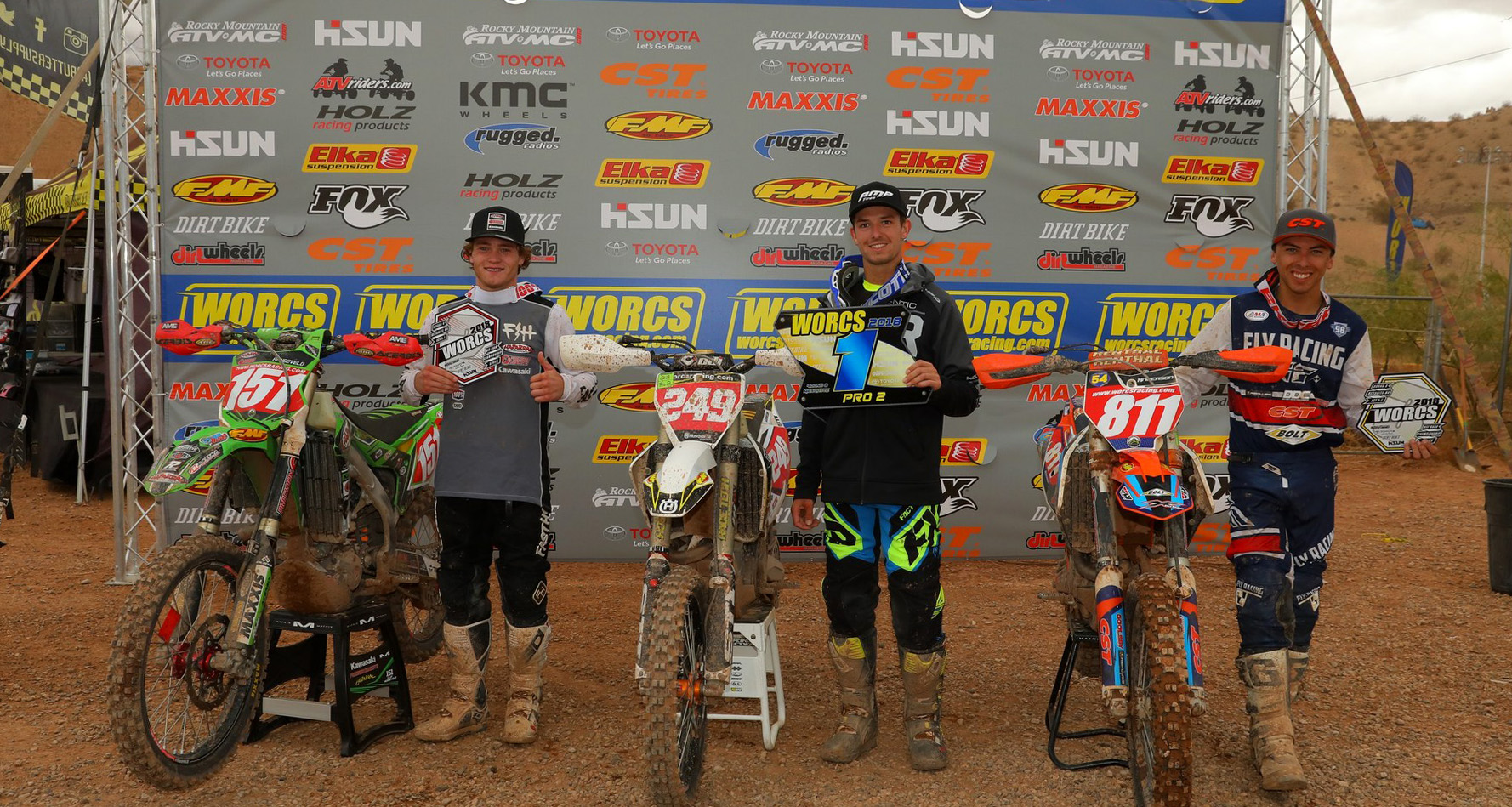 “I got the line late for the 450A race, so I had to come from the back and nearly won it,” said LaFountaine. “I think that helped me in the Pro 2 race because I was pushing so hard. I’m new to this, and it’s tougher than I thought it would be. The reason I’m out here is to learn everything I can. The sport is really going in the right direction so this is the right time for me to be doing this.” 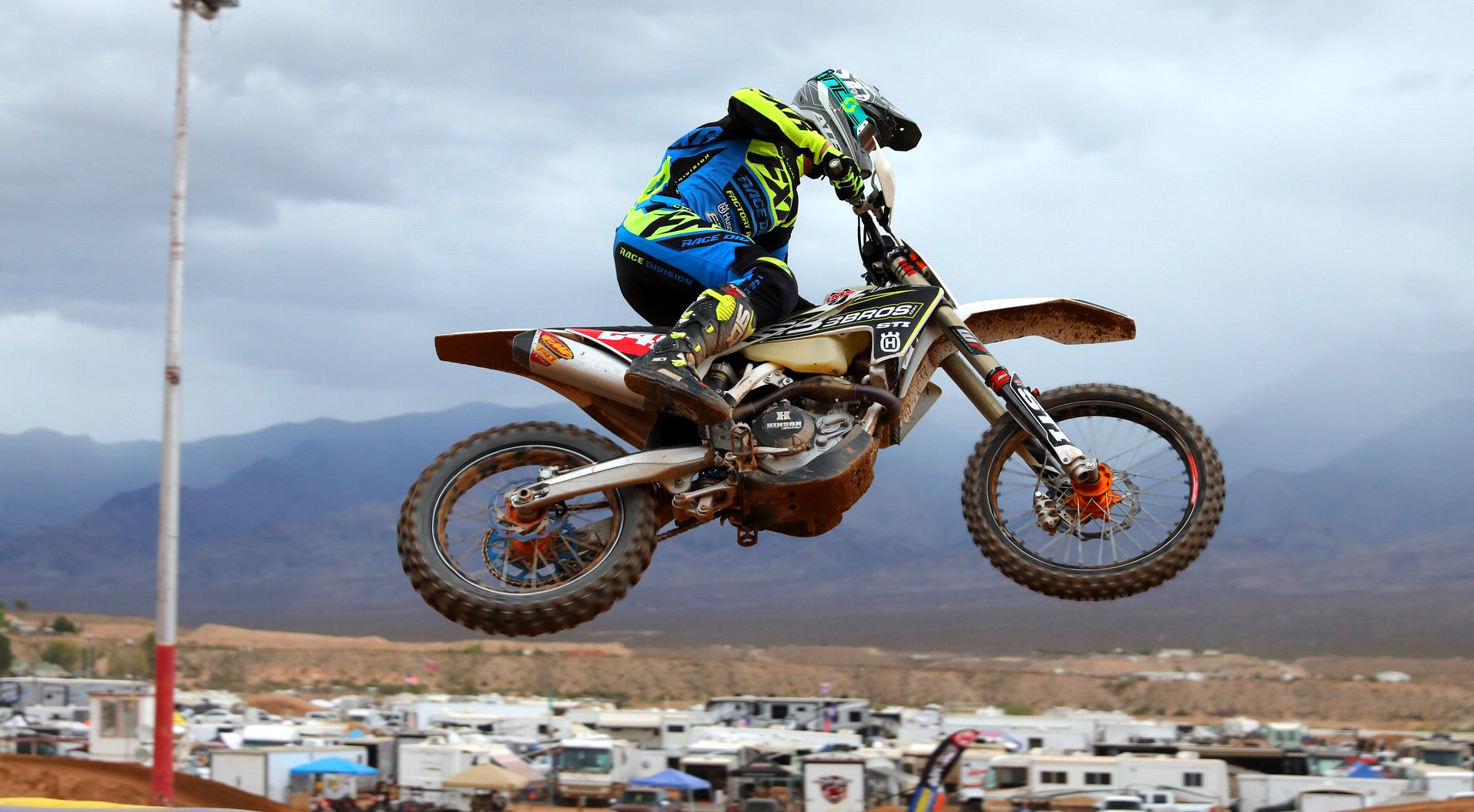 Hengeveld scored his second podium of the season on his Kawasaki. After suffering cramps earlier in the day, Hengeveld did his own version of Zen breathing to bring him second. “I had to focus on my breathing,” said Hengeveld. “I wanted to do well here, so I took it easy, breathed, and I’m on the podium. There were some lines I figured out in the race and they suited me really well.” 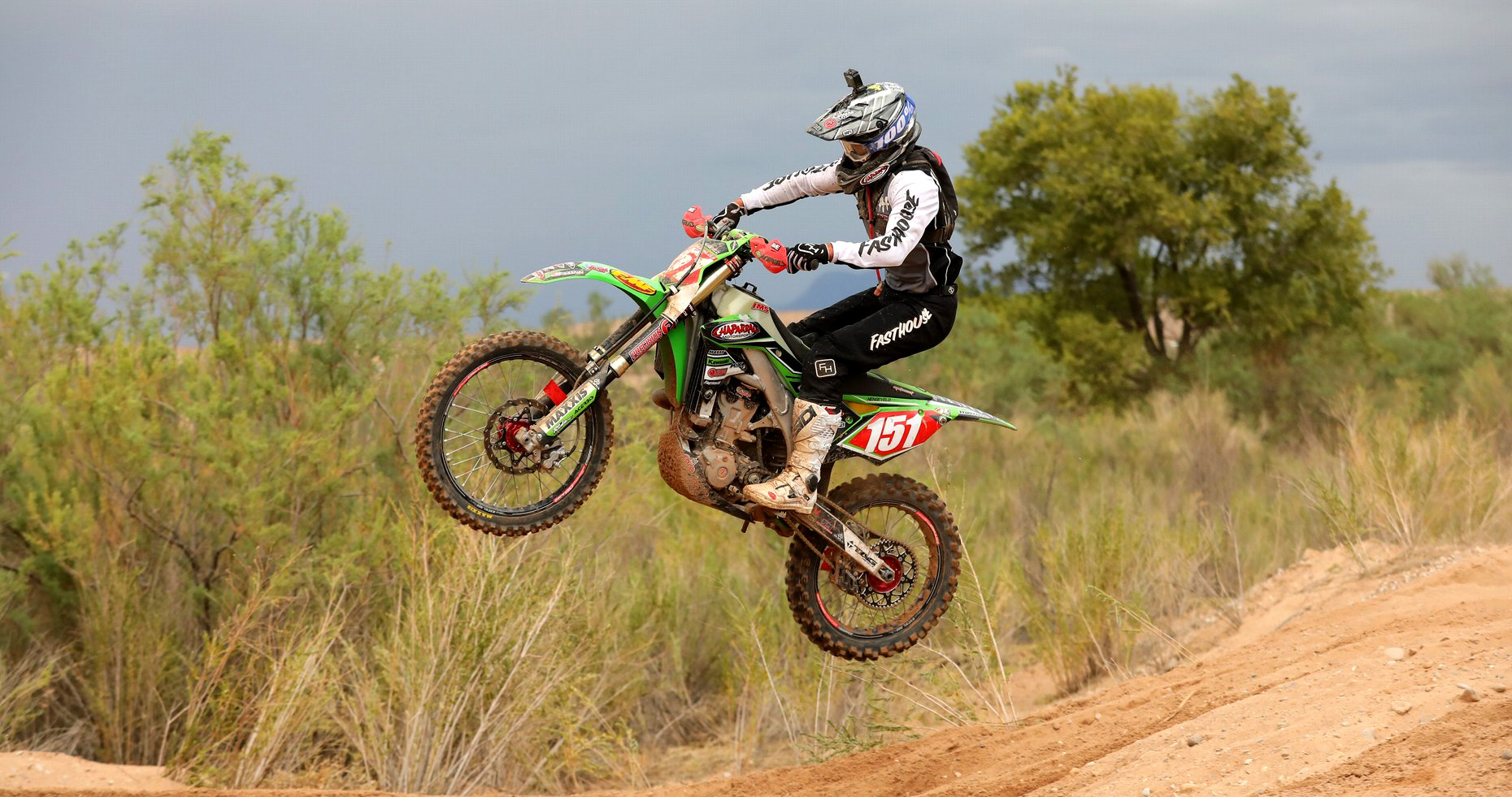 Despite fighting illness during the race, Anderson battled both Hengeveld and LaFountaine before finishing third on his CST KTM. Anderson’s seventh consecutive podium combined with a DNF by Austin Serpa gave him some breathing room in the title chase. “This track is ruthless, so I’m happy to be on the podium and put some points on second,” said Anderson. “It was a really clean race and it’s nice to be able to trust the people you’re racing with. I’m not really racing for points. I’m just taking it one race at a time.” 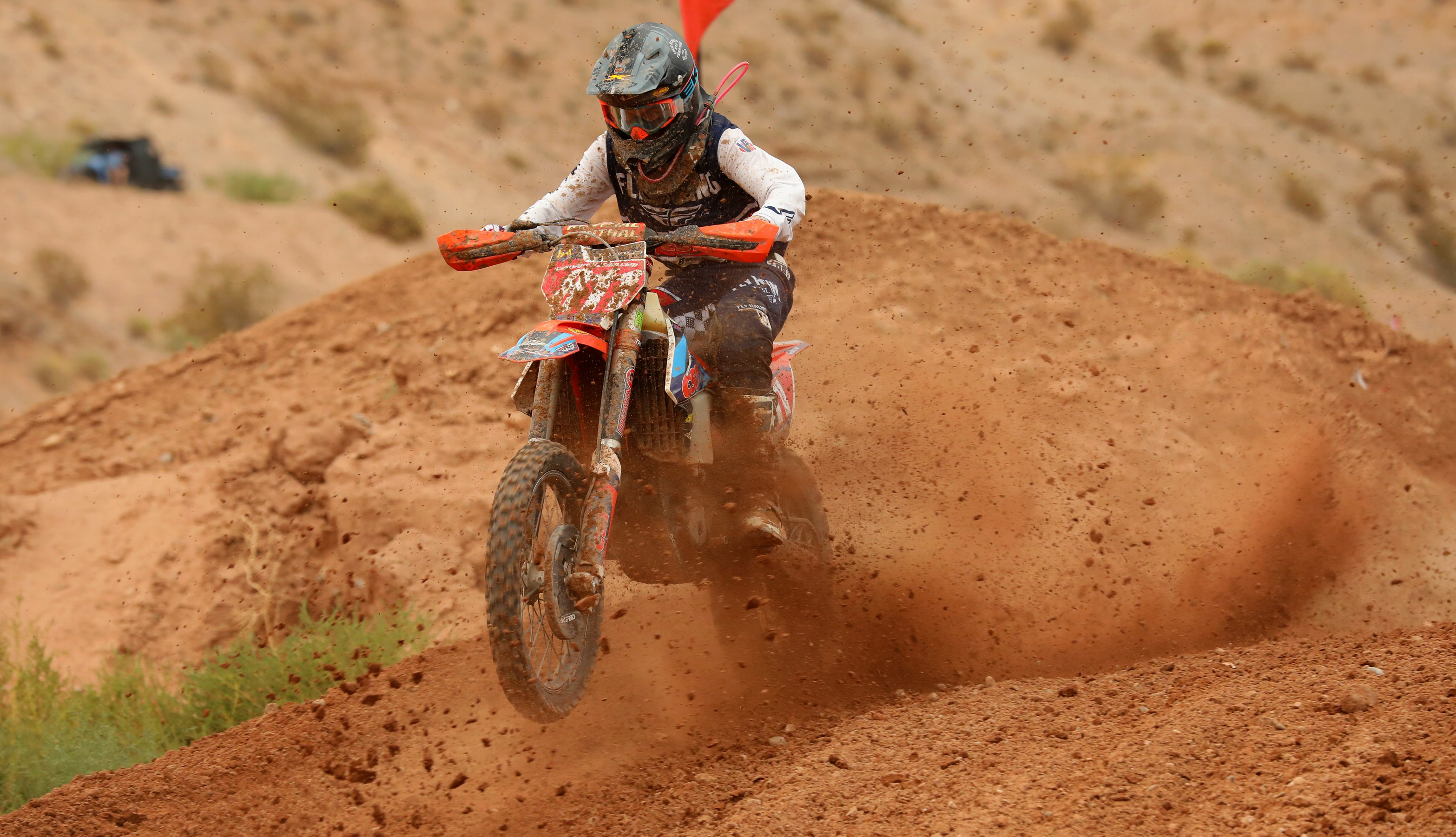 In Pro 2 Lights, Tyler Lynn won his first WORCS race after not competing in the series for more than a year. Mateo Oliveira finished second, followed by Collin Elliott. Lynn started third and battled Oliveira during the final two laps to net the victory. 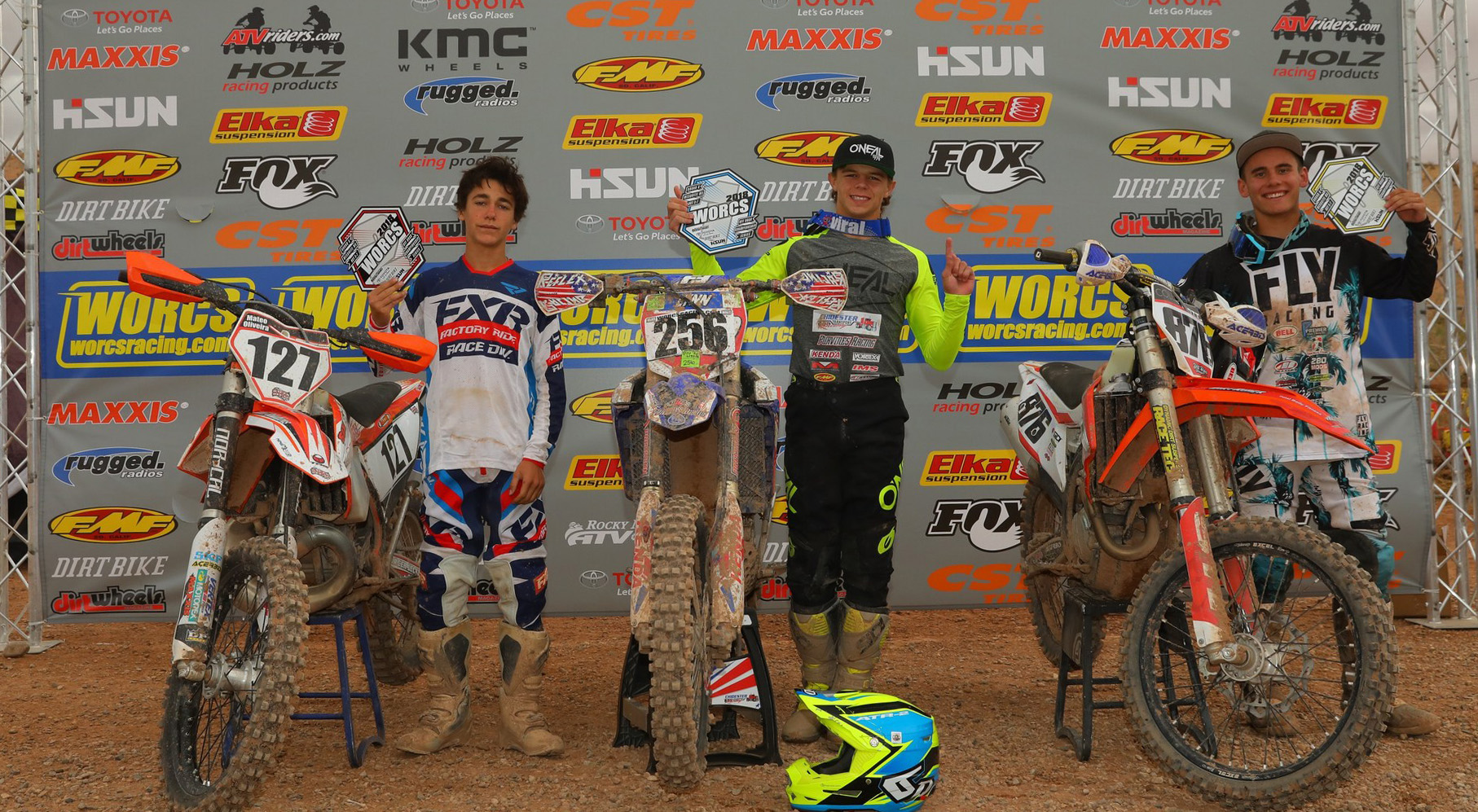 “I came out here to have fun,” said Lynn. “I won 250 this morning, so I knew I had a chance in the Pro 2 Lights. I pushed hard when it got rough on the last lap and got the win.” 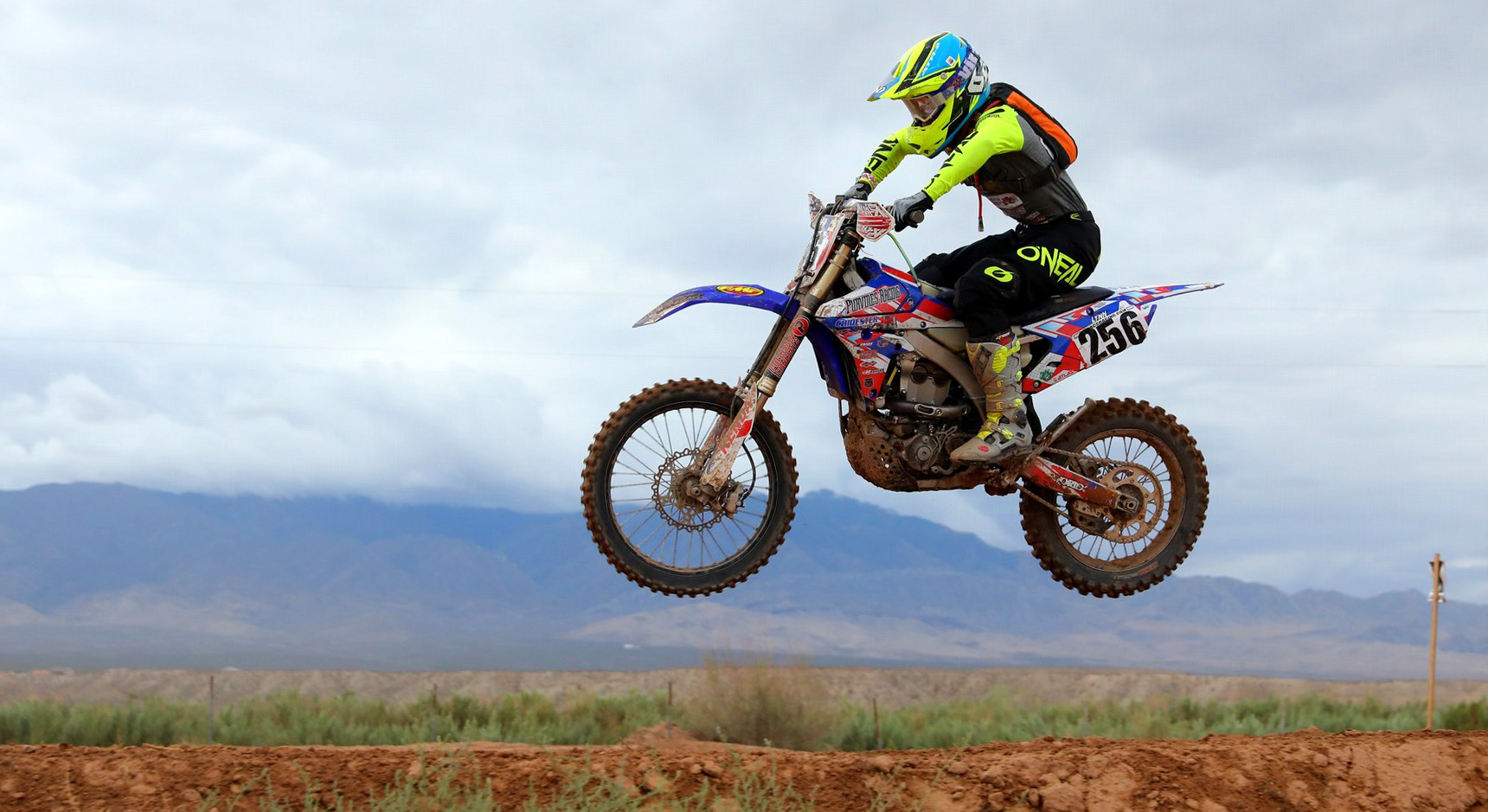 Oliveira was running his second race on a KTM 250 after moving up from a 125. The move paid off as he earned his first career WORCS podium. “I finally got on a 250 and that helped out today, putting me on a box for the first time,” said Oliveira. “The track was a lot like I run back home with the whooped out and rocky stuff, so I liked it.” 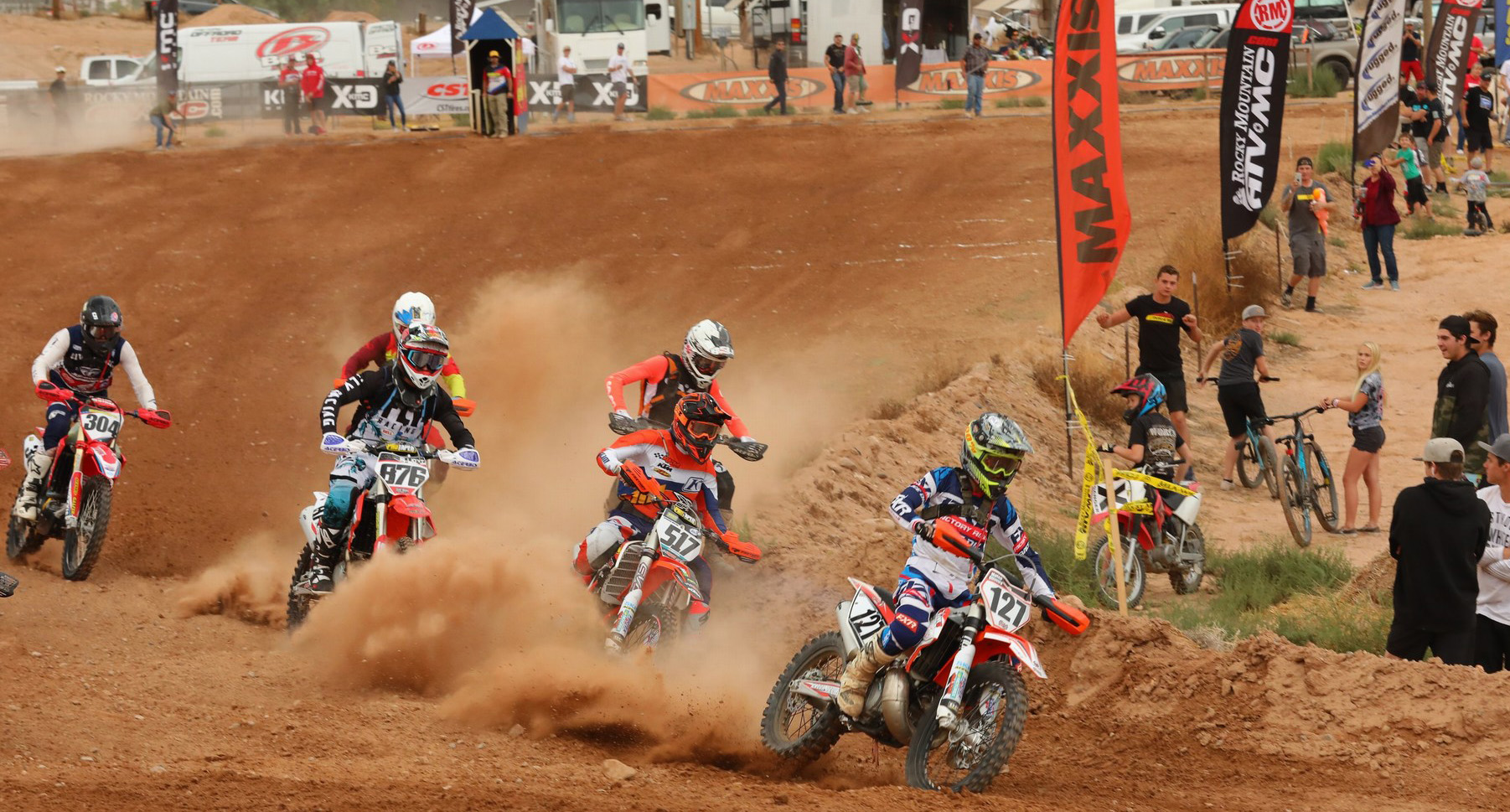 Elliott also made a switch, in his case going from a 2-stroke to a 4-stroke KTM. Elliott was battling for the lead late in the event, but crashed. He recovered to grab the final spot on the box. “I had a great time on the new KTM,” said Elliott. “I loved the way it handled in this deep sand; it was brutal out there. I was used to the 250 2-stroke, and I adapted to the 4-stroke really well.” 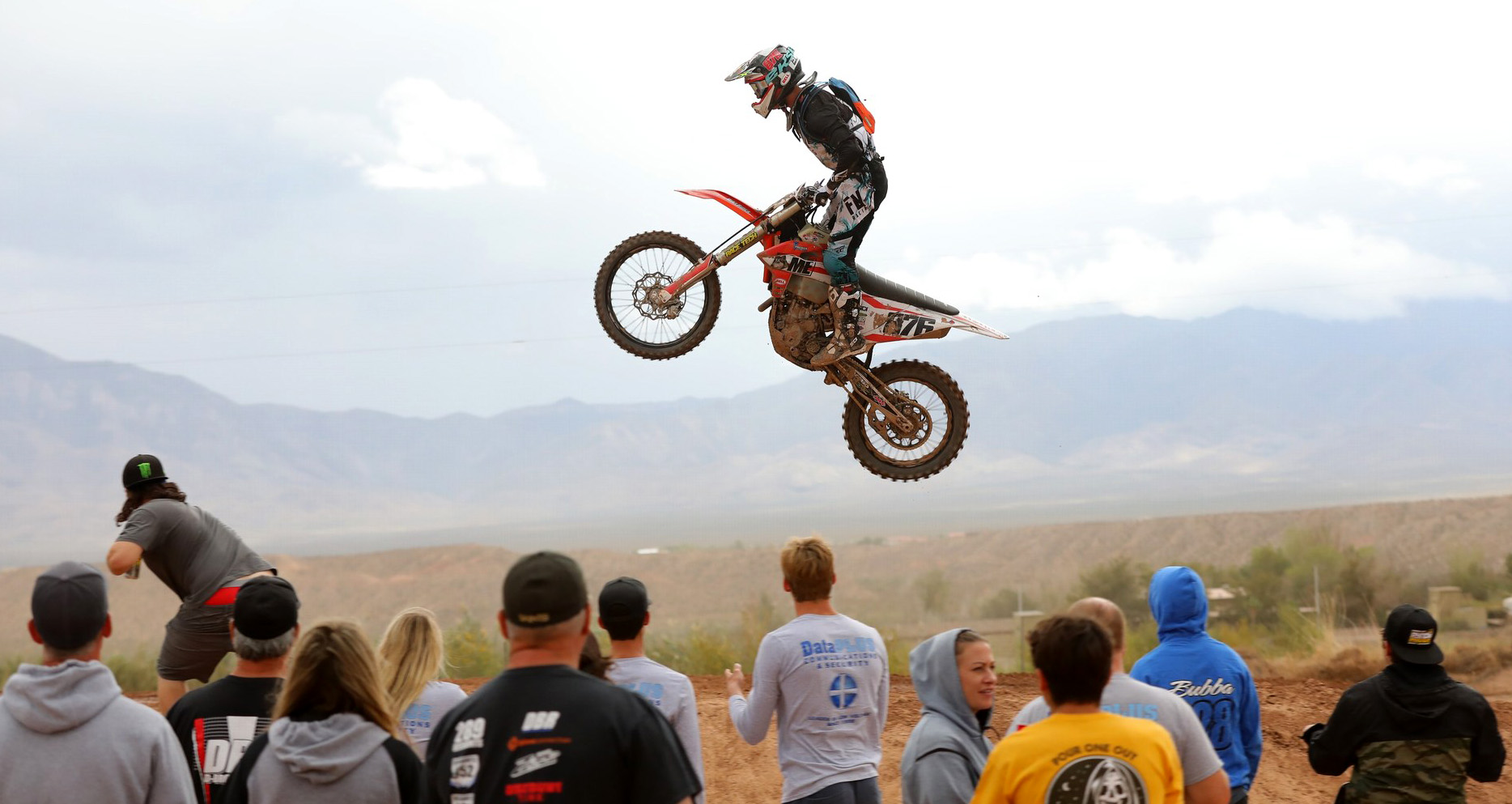 The WORCS motorcycles will hold its season finale at Buffalo Bill’s Casino in Primm, NV. The race is scheduled for October 26-28.