San Bernardino, CA (9/16/2018) – After the long summer break, Red Bull/KTM’s Taylor Robert picked up where he left off with his third straight win at the Rocky Mountain ATV MC WORCS Series presented by Toyota and Dirt Bike Pro Motorcycle race at Glen Helen.  Zach Bell finished second on his Husqvarna followed by Trevor Stewart on a Honda.

WORCS Round 7 was held at Glen Helen Raceway, which is the first round of racing since the three month long summer break, and the racers were treated to near perfect conditions for Glen Helen this time of the year with blue skies and temps in the mid 90’s. The great weather helped create a huge turnout of racers and spectators! With clear blue skies and a slight breeze each day for the races the weather was definitely cooperating. 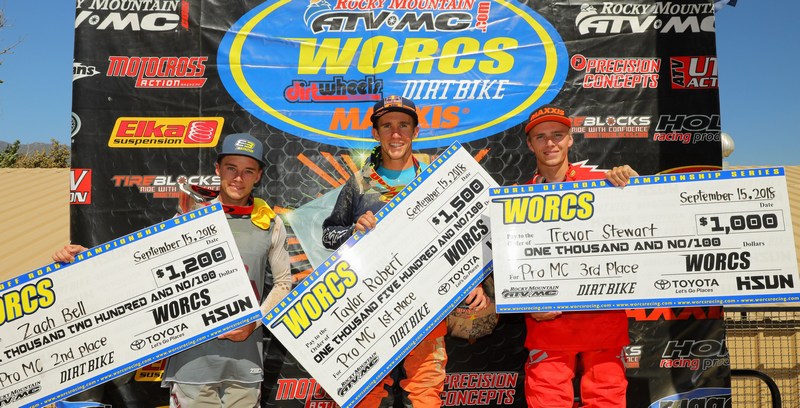 Taylor Robert’s win didn’t come easy after Zach Bell grabbed the holeshot, and Robert had to battle with him till the second lap before taking on the lead, which was fairly impressive considering Robert nearly sat out of the race after crashing into a water barrier during practice on Friday, and reinjuring his broken wrist.

“I hit one of the barriers in like third gear wide open and injured the same hand I broke six weeks ago. I didn’t think I was going to race this morning, so to be able to come out here and win after that makes it, even a little bit more special.” Said Robert on his win.

Bell took second and gained some much-needed points for his hunt for the Championship with this third podium finish of the season.  “Taylor and I had a really great battle. It sucks he got in front of me in the dust and it kind of separated us a bit, but that’s part of racing,” said Bell.

Trevor Stewart scored his first WORCS podium finish of the season after getting injured at his first WORCS race of the season. “This is my second WORCS race of the year because I took an injury at the first one, and I really didn’t want to come back, so I am glad to come to the Glen Helen round and end up on the podium,” said Stewart on his podium finish. 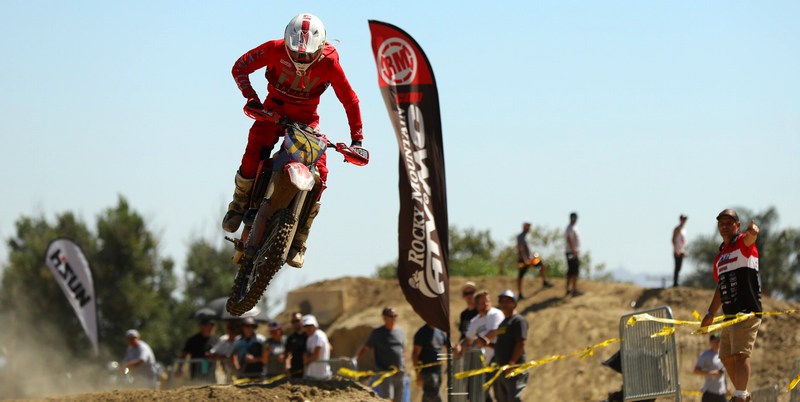 In Pro 2 class, Austin Walton from Sparks, Nevada turned some heads in his WORCS racing debut. “My Dad gave me the opportunity to go race Supercross, and I just didn’t feel like going that way, but I didn’t want to get away from racing, so I decided to give WORCS racing a try,” said Walton on making his WORCS debut. 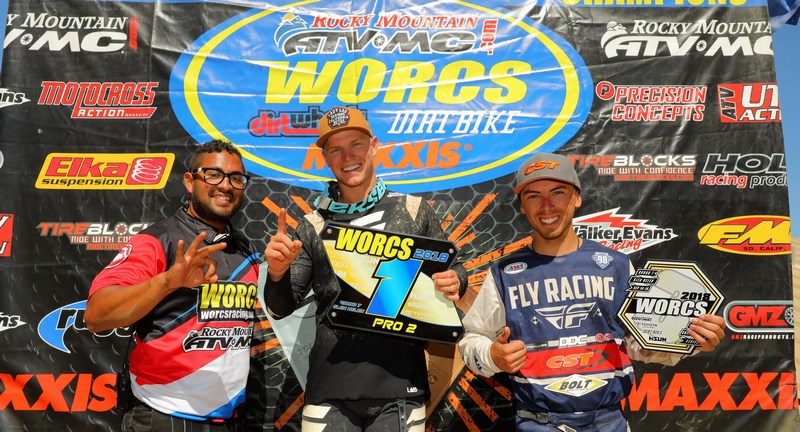 Walton would end up taking the win in the Pro 2 class. Needless to say, Walton was very excited, “I am super pumped…I was cramping up the last three laps. I was happy just to get the race over.” With a victory under his belt he’s looking forward to coming back for more. 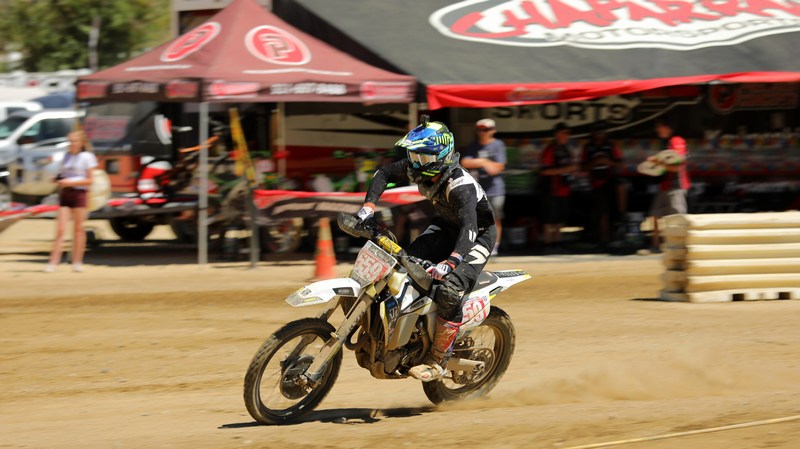 Tallon La Fountaine took his third WORCS start of the season and his third podium of the season as well taking home second place. Although he had a good start on his Husqvarna he struggled in the dust and during a transition between pavement season and tighter trails he clipped a tree.  “I ended up dropping in too quick, and I crashed pretty hard into a tree, which dropped me back several positions, so I had to battle my way back to get into second place,” said La Fountaine. 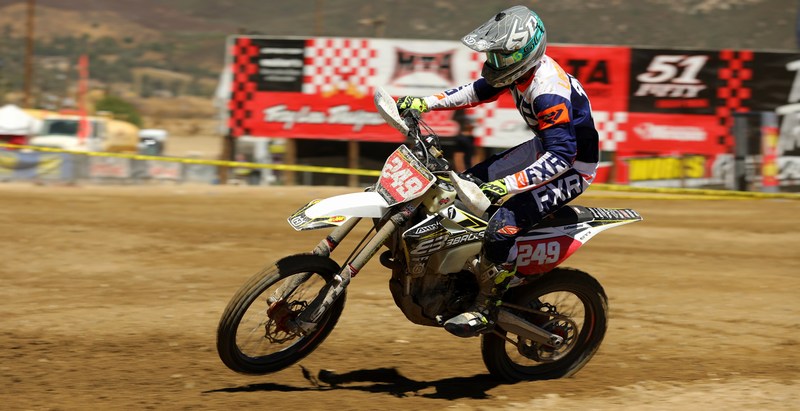 The Pro 2 point’s leader, Mitch Anderson scored his sixth straight podium finish to extend his points lead to 11 points heading into the final two rounds.  “I am battling Hengeveld and Serpa for the title. So, I beat both of them so that’s good for me, “said Anderson.

In the Pro 2 Lights it was Victor Guerrero Ruiz from Spain taking the win in his first ever WORCS race. Guerrero Ruiz decided to enter the race for fun and practice for an upcoming endurocross race for Yamaha 96 Racing Team. Guerrero sits second in points in the Spanish Enduro series and fourth in the World Championship, so he was super happy to come out and get a WORCS win in his debut. 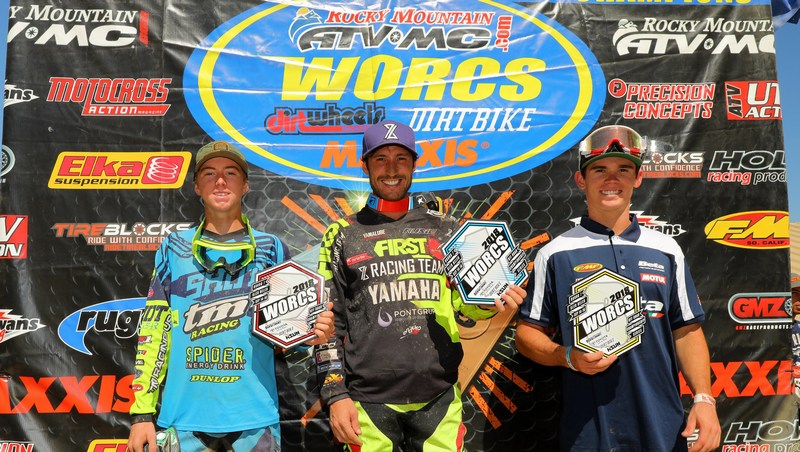 “I got a victory. So I am very happy to be here. The race was hard with a lot of dust,” said Guerrero Ruiz on his win. 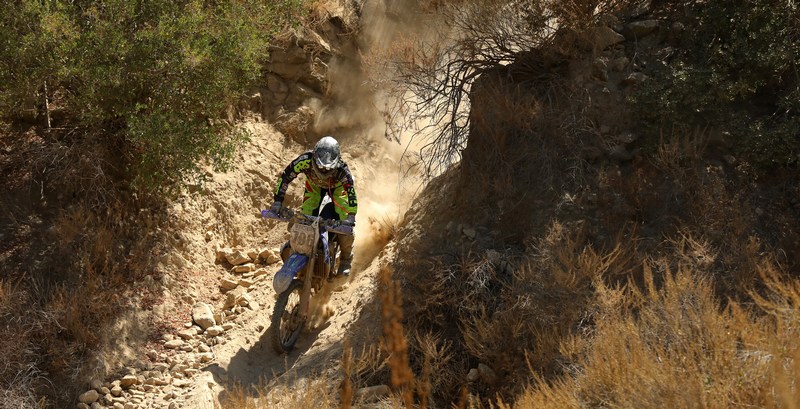 Robby Schott claimed his second podium finish of the season with a second place finish at Glen Helen after grabbing the Holeshot, “I did a lot over the summer to be ready for this race.  The dust made it a lot harder than usual, but when you got a clear track, you could really make up some time,” said Schott.

Chance Fullerton rounded out the podium, this was only his second time racing a WORCS event. Fullerton said he enjoyed the track, “I think WORCS did a great job. They put together a pretty good course and I enjoyed it.”

Spenser Wilton finished back in 17th, which was his first race off the podium this year, but he still has a 27 point lead heading into the final two rounds.

The WORCS Series next event will be Round 8 at Mesquite MX in Mesquite, NV on October 5-7th as the motorcycle season heads in the final stretch with only two rounds remaining as the points championship heat up.