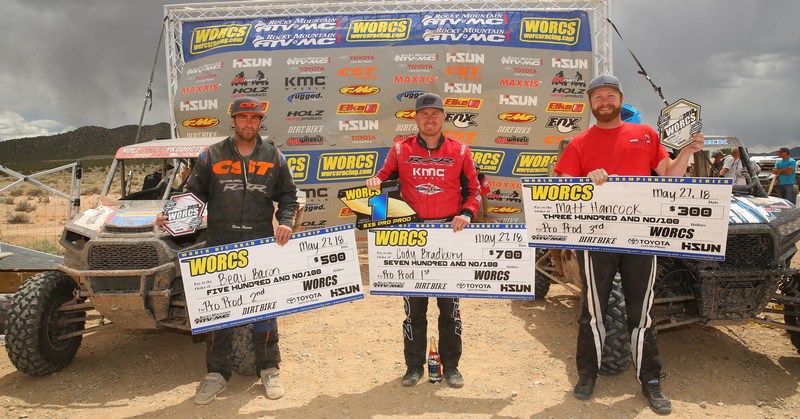 The event was held on Iron Mine’s big air motocross track, combined with desert and off-road sections, as well as an endurocross area that featured logs and tires. The two races were held under very different conditions. While the SXS Pro race on Sunday was run under fair weather conditions, the Pro Stock event on Saturday was plagued by visibility robbing dust.

In the SXS Pro race, Bradbury started second behind the Yamaha of Nic Granlund, but quickly took the lead on the first lap in the desert section. From there, Bradbury shined, and was never seriously challenged. Baron finished second, ahead of Matt Hancock on the all-Polaris podium. Granlund and Ryan Piplic completed the top five.

For Bradbury, it marked his second consecutive win and moves him up to second in points, just four points behind David Haagsma, who finished sixth. With only 10 points separating the top four in points, the championship is still very much in play when the series returns from the summer break in September. “I tried to open as wide of a gap as possible in the opening laps while the car was fresh,” said Bradbury. “I maintained from there. I’m stoked to get two wins in a row going into the break and I made up a lot of points.”

Baron started last in the field, but he showed a determination in getting to the front and he muscled his way past Piplic and Granlund en route to the podium. The finish capped off a near-perfect weekend that also saw him win the Pro ATV race. He goes into the summer break with momentum, coming back from two races where he finished outside the top 10 to get back on the podium. “I got even with Ryan going into this left hander; I had the inside and he didn’t lift,” said Baron. “He went over the berm. Later on, I thought I was in fourth and wanted to get on the podium so I was scrambling. I came up on Granlund and he took an outside line. I went to the inside and we came out of the corner side by side and he got driven right off the track.”

Hancock started on the second row, took the holeshot on his row and finished third. It marked his first podium of the season after having had issues all season in the SXS Pro class. “I finally got the KraftWerks supercharger dialed in,” said Hancock. “I started on the second row, got the holeshot and started putting it down. The car worked flawlessly, the track was fun, and once I got into the groove it was blast.”

In Saturday’s Pro Stock race, Baron won his second race of the year and furthered his lead in the championship chase to 11. Baron led every lap for the wire-to-wire victory. Hancock finished second, ahead of the Polaris of Corbin Leaverton.

“I was just trying to put down solid laps and hit my marks,” said Baron. “There was a lot of dust, and I knew if I was in the top two going into the off road section I had a chance. Luckily I was leading and kept motoring on.”

Hancock followed Baron’s roost in the dusty race and navigated his way to his second Pro Stock podium of the season. He now sits fourth in points. “I tried running him down, but it was really dusty,” said Hancock. “I gave it all I had. Beau and I do lot of testing together so it’s pretty cool to run with him. I had a rough start to the year, so I’m hoping to come on strong to the end. We’re preparing for a strong push.”

Leaverton started third and finished third in a relatively drama-free race. His second podium of the season puts him second in points, 11 behind Baron. “I got off to a decent start in third,” said Leaverton. “It was brutal out there and we finished just where we started, but we came away with some good points and made a little bit of money. It was a good weekend for me.”

The WORCS Series now heads into its annual summer break. The series will return to action September 14-16 at Glen Helen Raceway in Devore, CA.