The event was held at the former minor league baseball stadium and the track comprised three different circuits that were linked up. The track featured deep sand whoops that got rougher as the event was run, combined with several motocross-style jumps and endurocross log sections.

Robert, who missed four races in the middle of the season due to an injury sustained in the King of the Motos, was perfect in WORCS competition this season, winning in dominant fashion all six races in which he competed. The event here was no different. He took the lead out of the first corner and was never seriously challenged from there. Eric Yorba was second on a KTM, ahead of the Honda of Blayne Thompson. Trevor Stewart finished fourth on a Honda.

“I wasn’t the first one to the first turn, but I was the first one out of it,” said Robert. “I just had a solid race and I had a fun time. I like to sprint really hard the first couple of laps, get out front and then I can do my own thing. The track was cool. It was kind of short, but it was really fun. The KTM was great. The electric starter got me off to a really good start, I just snuck around Gary on the inside and said ‘see ya.’” 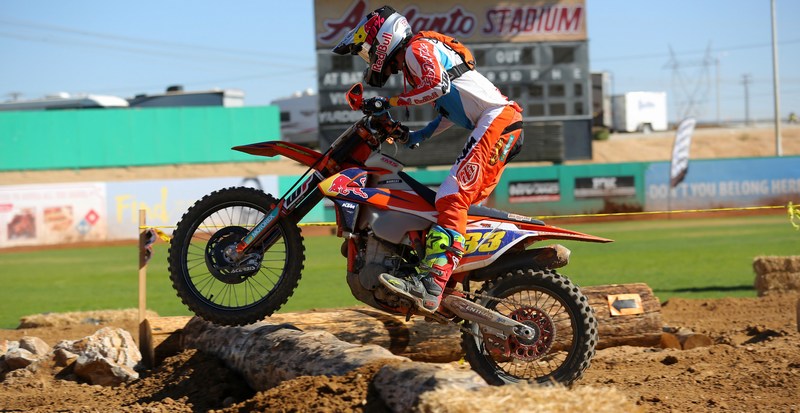 Though Robert came into the season with an eye on the championship. The injury forced him to miss the races while he recuperated. He plans to return to WORCS in 2018. “I was just bummed I couldn’t make the championship happen after I got hurt,” said Robert. “I still won every race I did, and I have to carry that into next year.”

Yorba was running a special paint green/white scheme on his KTM as a tribute to Motorex Oil’s 100th anniversary. He started third, but a crash put him back. He recovered to finish second, scoring his second consecutive podium. “I was running third early on, but I crashed right behind Gary and lost a few positions,” said Yorba. “I regrouped and settled into a good pace. I got into second and held onto that until the end of the race. The track turned out better than I expected. There wasn’t much for them to work with, and the sand was deep and really rough.” 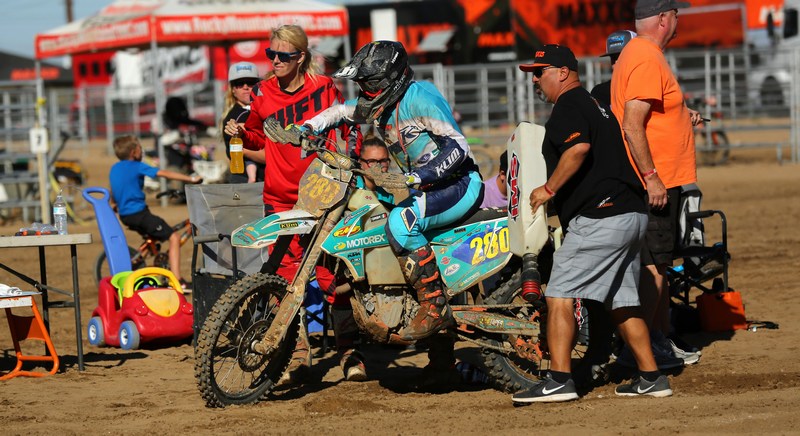 Thompson showed that his bad luck late in the season was turning around. He consistently moved his way through the field to score his third podium finish of the season. “I got second on the second lap and held it until the second to last lap when I ended up going down and Eric Yorba passed me,” said Thompson. “I came away with a third and we’ll take it. We’ve been riding really well, but we’ve had some stupid little issues with the bike; wheels, tires and other little issues. We came back and it feels good to be back up here. We’ll come back next year and try to do it some more.” 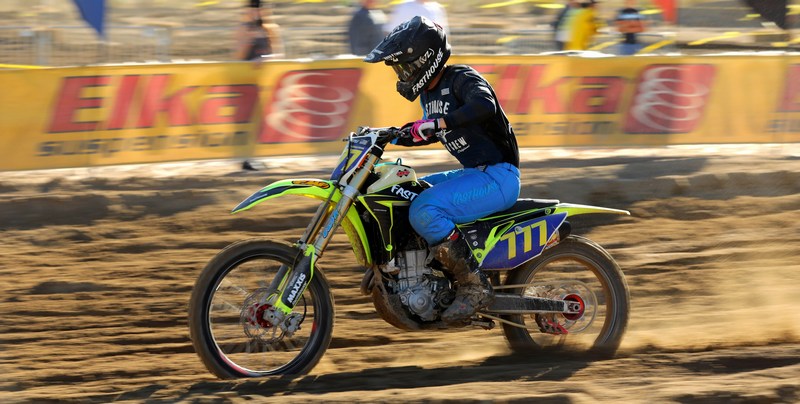 Sutherlin finished fifth here to cap off a consistent and competitive season on his Yamaha. Sutherlin got off to a quick start, scoring two victories and three runner-up finishes in the first five races of the season. He backed that up with two more podiums to score the title, his second, in his first year on the Purvines Yamaha. 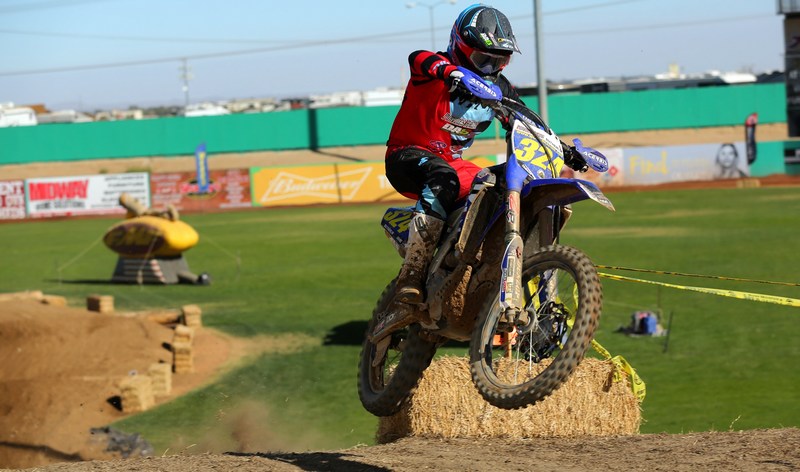 “Ron Purvines stepped up this year and gave me a great opportunity,” said Sutherlin. “We really put Yamaha on the map this year. They haven’t really been anywhere on the West Coast for the last 10 years. To win a championship for them and for Ron is huge. We’re looking for big things from Yamaha next year.”

Bell fought injury all season and decided to retire from full-time riding. The three-time titleholder was competitive all season, scoring four third-place finishes. An injury in a Big 6 race at 29 Palms forced him to miss the second-to-last round. 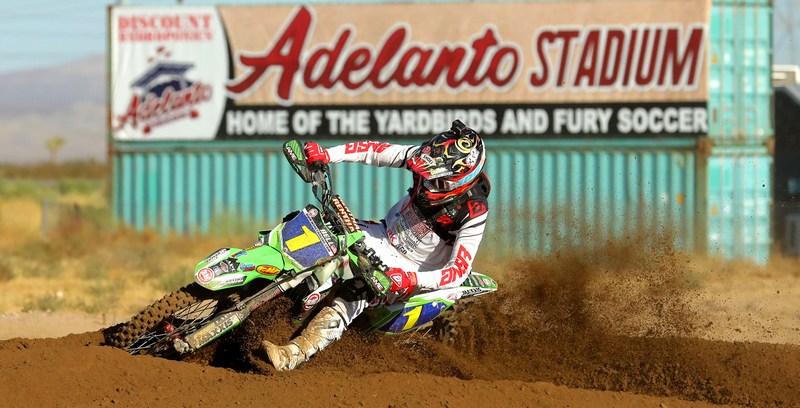 “This isn’t the end of me competing in the Pro class, but this is my last full season chasing the championship,” said Bell. “It just felt like the right time to close this chapter on my life and move on to the next one. I had a really good battle with Travis Damon for fourth. I knew I was in it for a battle with him. In the end my back started locking up and I felt I didn’t need to prove anything so I sat at the finish line and cheered everyone else on.” 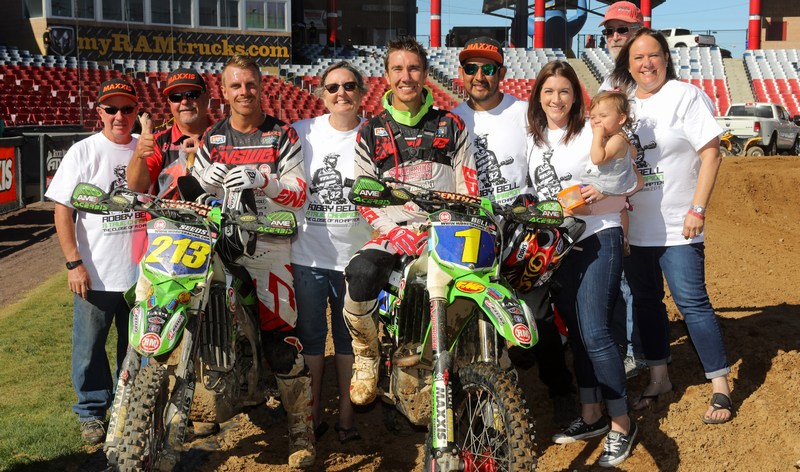 Bell will step into a team management role next season. While nothing is solidified yet, Bell is planning to share his competitive spirit with up-and-coming riders and build a solid racing team. Oh, and he may race a time or two. “My goal is to build a team and be a dominant force on the West Coast,” said Bell. “I still might pick and choose a pro race to enter if I’m feeling frisky. Other than that, my focus will be developing the team, the business side of that and helping the riders.”

In Pro 2, KTM rider Dante Oliveira clinched the championship with his fifth victory of the season. Shane O’Dor finished second on a Kawasaki, followed by the KTM of Alex Dorsey. Oliveira was dominant this season, finishing on the podium in every round of racing.

“I lost my shifter on the first lap,” said Oliveira. “I came into the pits, they threw one on for me, and I had to catch back up. It’s awesome to win the last race. My two stroke was a lot of fun. My friends and family were out here cheering me on. It’s nice to finish out the season with a win.”

In Pro 2 Lights, Clayton Hengeveld’s fourth victory of the season on his Kawasaki handed him the championship. Austin Serpa finished second on his KTM and finished second in points. Jake Alvarez finished third on a Husqvarna 125cc two stroke. 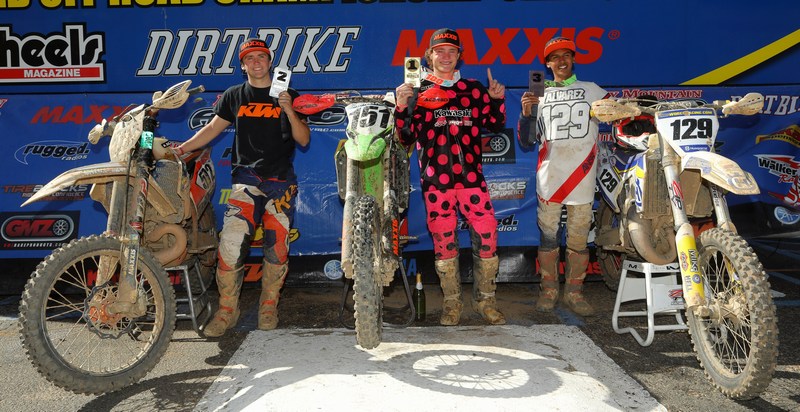 Hengeveld was injured just before the summer break and actually missed a race as a result. He made up time quickly, winning two straight to nab the title. His victory here came after he pitted late in the race while running third. He came out and charged hard to take the win.

“After we pitted and got some water, I got a second wind,” said Hengeveld. “I just put it down, found some smoother lines out there and I got it done. There’s nothing better than getting the championship with a win. I worked really hard for this. I’m almost speechless right now. When I was hurt, I was in the gym with a cast on. I knew what I needed to do to win this championship and I worked really hard for it.”

Serpa scored his second consecutive runner-up finish here. Though he looked to be a runaway favorite for the title this year, he settled for a close second in points on his KTM. “It’s better than the ER,” quipped Serpa. “The sand was where I made up the most time. Where I live it’s almost all sand so I loved that part of it. It got pretty gnarly toward the end, but I found smooth enough lines to make it work.” 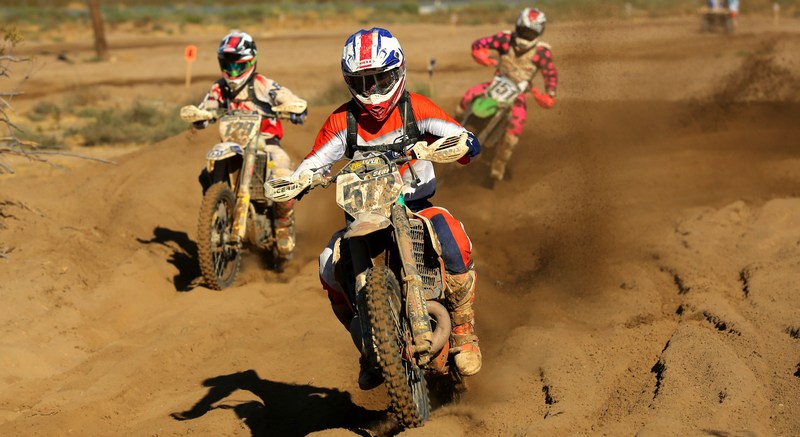 Alvarez had his work cut out for him, running a 125cc machine against the 4-stroke 250s. He made it work and finished third. “I’m super pumped,” said Alvarez. “I’m just trying to wake up this 125 to keep up with the 250s. I just got them in the corners and made the best of it.” 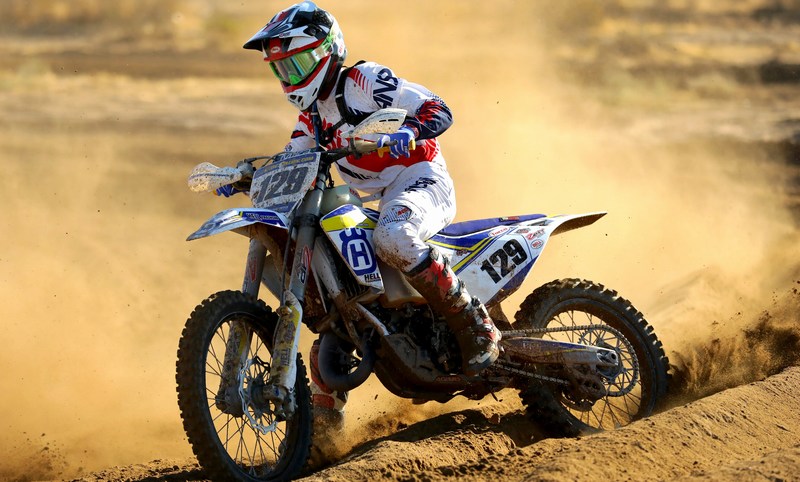 The Rocky Mountain ATV MC WORCS Series present by Maxxis and Dirt Bike Series will kick off its 2018 season on February 2-4 at The Orleans in Las Vegas, Nevada.