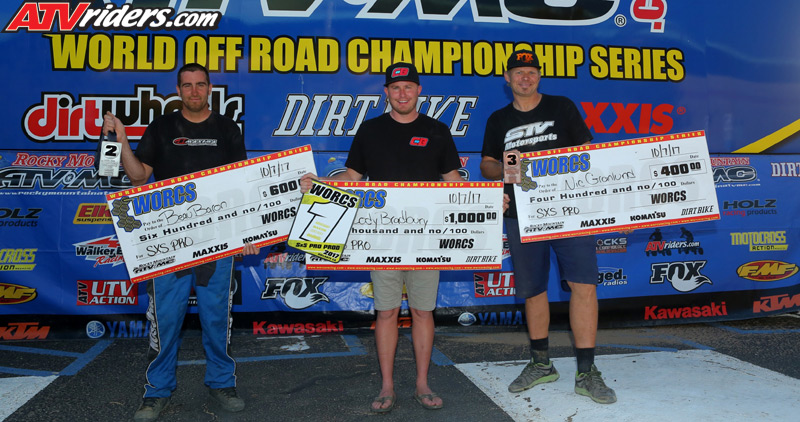 Though temperatures were in the mid-90s at race time, low humidity, a light breeze and track preparation kept dust to a minimum. The circuit was created in the former baseball stadium, utilizing the warning track, the outfield and infield sections, as well as the desert surrounding the stadium. Several jumps on the back section of the track took their toll on the competitors as those that tried to jump either broke or crashed. The deep sand whoops and heavy rutting also challenged the competitors.

In the SXS Pro race, Bradbury snagged the holeshot and took off to dominate the race. Behind him Beau Baron hung onto second until the end, holding off Nic Granlund, who had issues with the deep sand. Randy Romo scored his first of two fourth-place finishes, ahead of Ryan Piplic. Matthew Hancock was sixth, ahead of Keith Johnson, who celebrated his retirement with a seventh-place effort. Haagsma’s eighth-place finish handed him his second consecutive championship.

Bradbury recovered from a big crash two rounds back at Glen Helen to finish out the season with a pair of victories. After having to completely rebuild the car, the Polaris driver celebrated his birthday with his fourth victory of the season in the Pro class.

“I got a good start and ran my own race,” said Bradbury. “I had the big crash at Glen Helen and then followed it up with a win in turbo and then I got two wins here. It’s a good way to end the season. I had an up-and-down year. After the big crash last weekend, my dad and I pulled that car all the way down and put a new frame on it to make it race ready.” 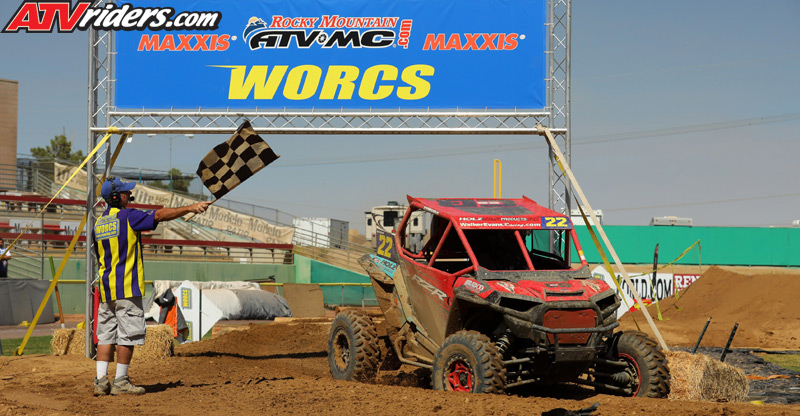 Baron cruised behind Bradbury for the first few laps. After gapping third place, he chose to run a conservative pace in his Polaris, save his car and snag his second podium of the season.

Granlund fought his Yamaha and the deep sand on course. Despite having issues due to his 27-inch tire choice, he held on for third. It marked his sixth podium of the season in seven starts.

Romo continued his strong late-season run with his first of two fourth-place finishes in his Polaris. His Holz-built car ran competitively, allowing him to finish the season on a high note. Romo earned a victory this year as well as an additional podium.

Piplic misjudged a jump on the first lap and suffered a front differential issue in his Polaris. While running with two-wheel drive he finished fifth. He ended up second in points on the merit of two victories and three additional podium finishes.

Johnson finished out his 12-year WORCS career with a seventh-place finish. Johnson graduated from WORCS ATV racing to run SXS later in his career. Despite running a naturally aspirated car in a class that allows turbos, he put in a consistent effort all season. “We’ve raced since 2006 with WORCS and today was my last race,” said Johnson. “We’ll see what the future brings us. I had a lot of fun this year racing in the Pro Class with all the turbos. We didn’t have any DNFs, so we stayed consistent and finished sixth in an NA car in the turbo class.” 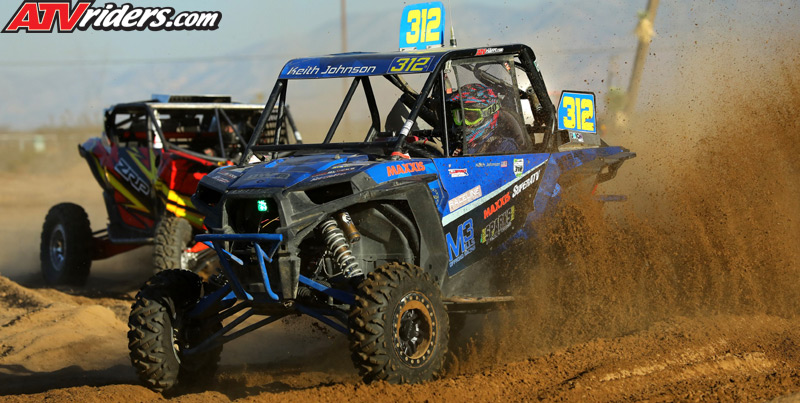 Haagsma proved this season that the durability of his naturally aspirated car was definitely a match for the fire-breathing turbos. Though he finished eighth here, his consistent season handed him his second consecutive SXS Pro title.

“I was just looking for a couple points to beat Ryan Piplic,” explained Haagsma. “I got the halfway point, and I just putted around to get the championship. Piplic told me I might be only the second guy to win back-to-back championships. I’m really proud because the guys that did it before me were really good. We didn’t change one thing from last year.”

In Pro Stock, Bradbury was again victorious, but he had to work for it. After a slow start, Bradbury worked his way to third from sixth and the battle was on. While Ray Bulloch and Hancock battled for the lead, Bradbury snuck underneath and took the lead on the final lap. Hancock finished second, followed by Bulloch. Randy Romo and his daughter Sierra Romo completed the top five. Baron finished sixth and clinched the title.

“I didn’t get out of the gate really well and it was a battle,” said Bradbury of his first Pro Stock victory of the season. “I was back in sixth or seventh. Bulloch and Hancock were battling and I was able to sneak in there on the last lap. I ate a lot of dirt and a lot of sand.” 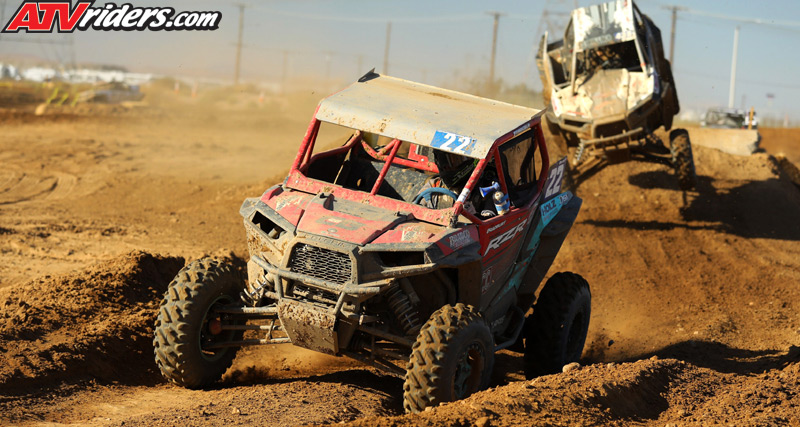 Hancock continued his late-season podium run with his third trip to the box in as many races. He took second from Bulloch just feet from the finish line and, in the process, took second in points. Hancock had one victory this season, as well as three additional podiums. 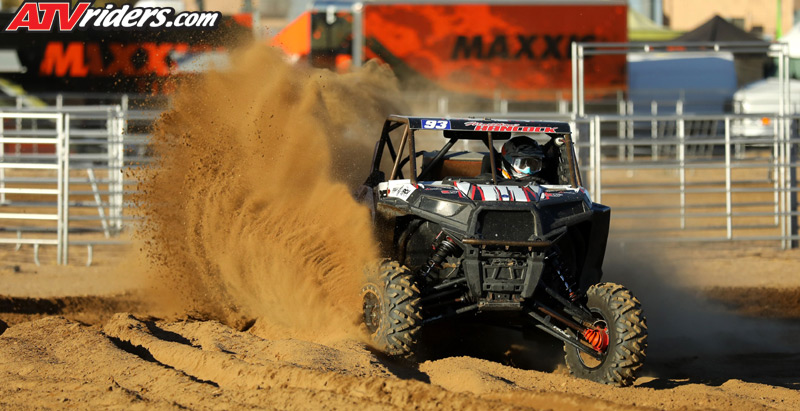 Bulloch put the issues that had plagued him in the last three races behind him as he got back on the podium here, despite contact with Bradbury and a driveline issue late in the race. Bulloch won three races this season, and finished on the podium one additional time.

Baron needed to finish 18th or better to clinch the title here. He bettered himself by finishing sixth. In the process, he scared away the specter that had haunted him when he lost the title at the last race of the year two seasons ago. Baron also won the 2017 WORCS ATV championship. 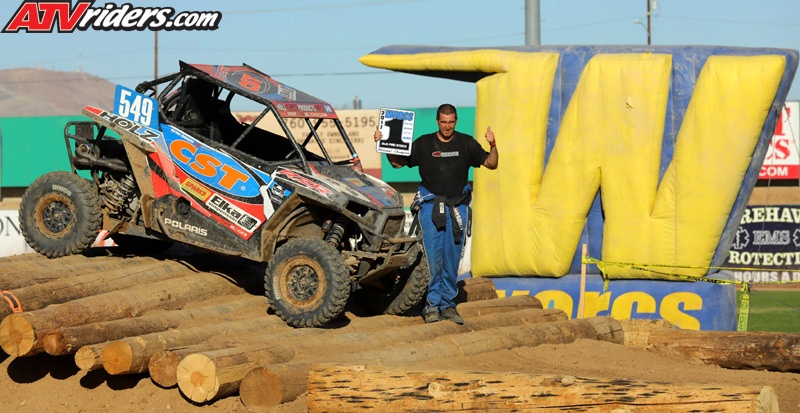 “All I needed was 18th and I finished sixth so we’re over achievers,” quipped Baron, who won three races this season and scored podiums in two additional races. “I honestly let everyone go on the front row and I rode around. I didn’t want to break my car and just get to the finish line to win a championship. Nobody remembers what place you got, but everyone remembers championships so that’s the most important thing.”

In SXS Women’s, Jennifer Broughton won the race and clinched the championship. In just her third year of competition, Broughton won six races this season, and finished on the podium four more times.

“I wanted to finish these last two races, but I really wanted to win this one,” said Broughton. “I did what I needed to do. It’s surreal right now. Tomorrow it will sink in. I’ve only been racing for three years. The first two years, I was third. I’ve gone from two thirds to a first.”

The 2018 WORCS season is scheduled to kick off February 2-4 at The Orleans in Las Vegas. The season opener will feature a full program of racing for SXS, ATV and motorcycles.