Posted on September 18, 2017 by Podium Promotions Leave a comment 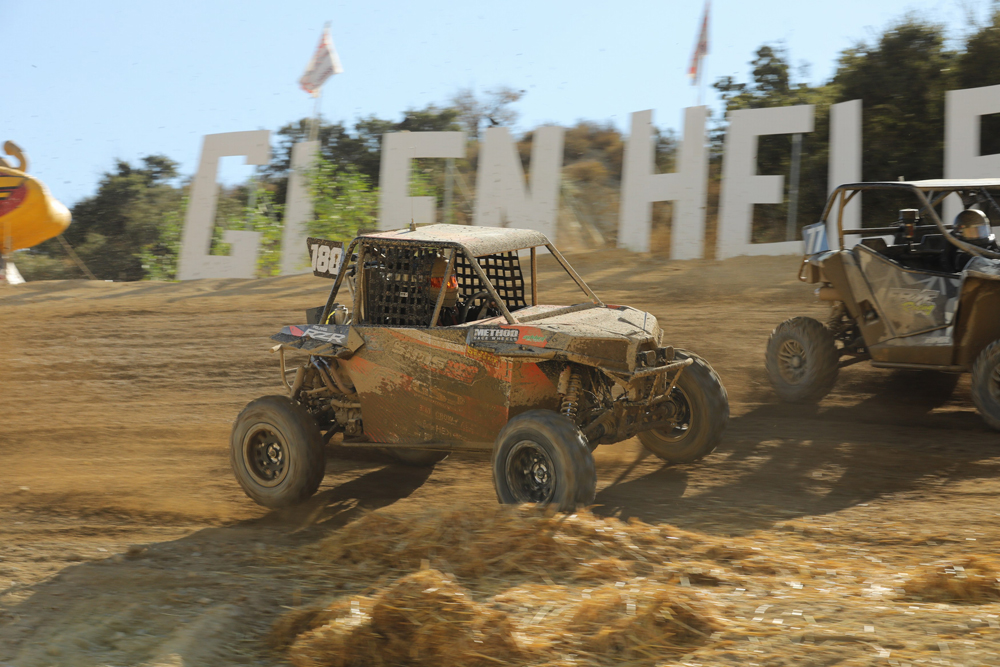 September 9, 2017- Devore, CA- WORCS round 10 was a tough one! I’m really glad I was able to get to practice on Friday and run a few laps the day before the race. They changed up the course and they had us running it backwards, so practice was really important.

We arrived at Glen Helen Saturday afternoon and headed to the driver’s meeting. After the meeting, we fueled up my car, checked my tires, and took one last look to make sure it was in great shape before starting the race. There were 7 cars in my class and I picked a spot in the middle of the line. As we waiting for the flag to fly, one of my competitors jumped the line and stopped before the flag dropped.

The flagger then flew the flag and we all took off. I ended up falling 4th in line off of the start. I knew I had some work to do, so I stayed on it and got moving. I was able to pass the 4th and then the 3rd place racers in the first lap. During the second lap, my car was giving me some trouble and was bogging out, so I slowed down and shut it off hoping it would reset. As I was turning it back on to get going again, I was passed by one of my competitors and moved back to 3rd place. I stayed on the car in front of me and was able to make a pass coming down off of the Glen Helen Talladega Hill. Going into lap 3, I was trying to make up time. The leader was running great and I was doing everything I could to catch him. My car started to bog out again, but this time I didn’t slow down as much. I turned it off and back on, hoping it would reset itself again. By that time, I had a big enough lead between myself and 3rd place, so I was able to stay in the 2nd place position. I continued to focus on chasing down the leader. Heading into laps 4 & 5, I was going as fast as I could trying to make up time. During lap 6, when I got on the Lucas Oil portion of the race course, the water truck pulled out in front of me and I had to slow way down so I didn’t hit him. I had to get around him fast because he was slowing me down. I was finally able to pass the water truck and with no more tear-offs and a muddy lens, I drove right through the spray. I drove as fast as my car would go but with the challenges I had during the first part of the race, the leader had gotten pretty far out ahead. I didn’t give up and crossed the finish line in 2nd place. The WORCS officials ended up imposing a minute penalty on one of the racers in my class. That penalty moved me to the 1st place position for the day.

We’ve been working on my car this week prepping for DIRT Series round 8 this weekend. We will also be attending the Sand Sports Super Show in Orange County, CA. I’m looking forward to another weekend filled with racing!
Thanks so much to these awesome companies and people that support my program: Got Sand Performance, Addict Racing Engines, Red Rock, Method Race Wheels, Crow Enterprizes, Factory UTV, GBC Motorsports, RT Pro, Yoshimura, Demon Powersports, Baja Designs, Gates G Force, Elka Suspension, Rugged Radios, Maxima Racing Oils, Crown Performance Products, Surface Sun Systems, Butter Supply Co, Pavement Recycling Systems, Perrault Motorsports, and my parents who make this possible for me! Thanks to WORCS for a great weekend of racing and Harlen Foley for always taking such rad pictures of us! You can check out the Sims188 Racing team on Instagram @csims188 or on Facebook at www.facebook.com/csims188/.

Do you want to submit your own amateur race report? Click here for instructions!