Temperatures in the mid 90s and a nice breeze kept dust to a minimum as the SXS racers took on a brand new layout for the weekend’s events. The track incorporated parts of the Glen Helen course, the Lucas Oil track and the REM Course. The circuit was run in reverse with from the Summer race along with some new sections added as well.

In the Pro SXS race, Ryan Piplic grabbed the holeshot in his Polaris, but Bradbury and Hancock were on either side of him coming into the first turn. Piplic’s ride soon suffered a broken axle, handing the lead to Bradbury, who led the rest of the way.

Hancock and Nic Granlund were both awarded second-place finishes due to an issue regarding a supercharger on Granlund’s Yamaha. Series organizer Sean Reddish explained that there was some confusion in allowing Granlund to run the supercharger and he didn’t want to needlessly penalize anyone.

“After reviewing the information from technical inspection and the conflict from what was authorized by our technical inspector and our rulebook, the fairest outcome was not to penalize Nic Granlund,” explained Reddish. “We also didn’t penalize anyone behind him, so we awarded two second-place finishes for points and moved everyone else up one place. We have revised our rulebook to allow superchargers in the Pro class. This was our intent from the beginning, but due to an oversight, it wasn’t published correctly.”

David Haagsma was third and extended his lead in the title chase to 20 points. Randy Romo finished in fourth followed by Corbin Leaverton. 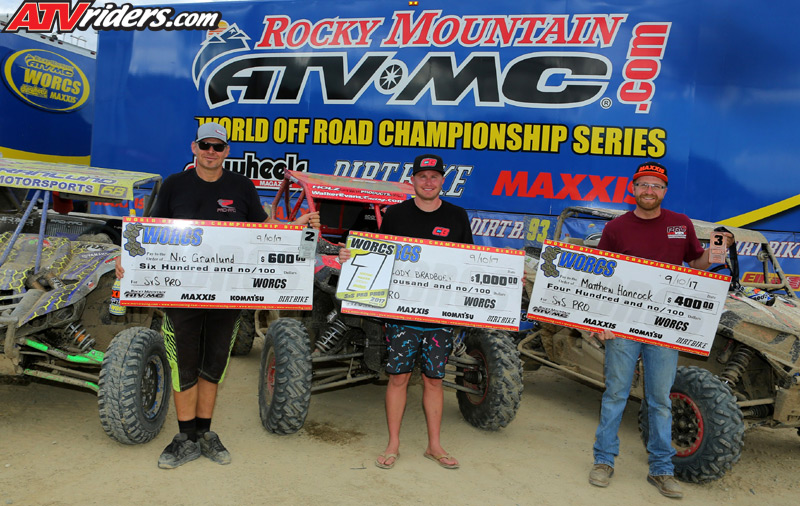 Bradbury, who crashed hard in the Pro Stock race on Saturday, got a sense of redemption by winning the Pro SXS race. His win, combined with Piplic’s ninth-place finish, puts him well in the thick of the points chase with just one race left. 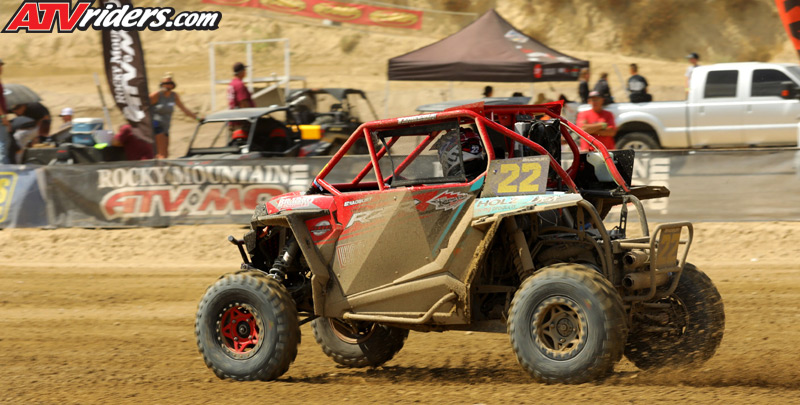 “I lined up way outside and decided if I got a good jump I’d go for it,” said Bradbury. “I grabbed the holeshot and ran some solid laps. Ryan and Matt were giving me a good run. Nic and Corbin were right there. This is great for me after yesterday’s catastrophe. I just wanted to go out and have a solid finish. That’s now three wins this year. The turbo suits me better than the stock car. I like having more horsepower. “

Hancock has had a difficult relationship with Glen Helen. His luck changed during the weekend. Running a naturally aspirated car in a class that allows turbocharging, Hancock was still highly competitive during the race, especially in the tighter sections. 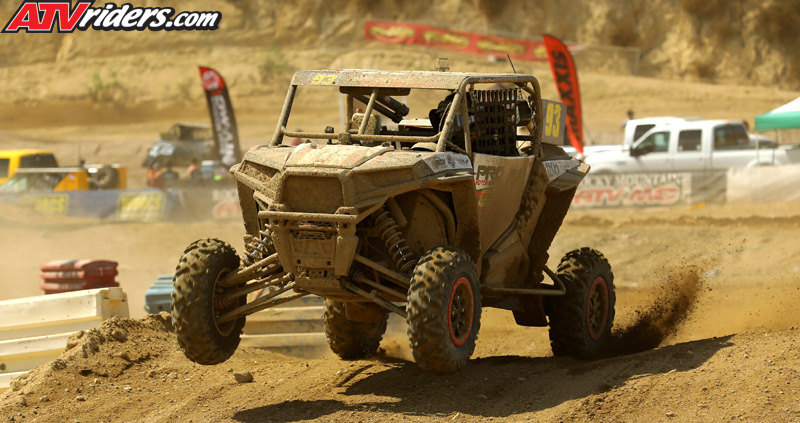 Granlund started on the second row, but was quickly moving forward. Despite suffering a crash early in the event, he rebounded to cross the line second.

Haagsma drove like he was running for a championship. Employing a conservative strategy he gained ground in points going into next month’s season finale. Haagsma was also driving a non-turbo car.

Romo likely had the fastest car on the track during the waning laps, but his two foot driving style kept sending his RZR into limp mode, which kept him off the podium. He had passed Haagsma and was battling Hancock, but his car kept shutting off, moving him back. 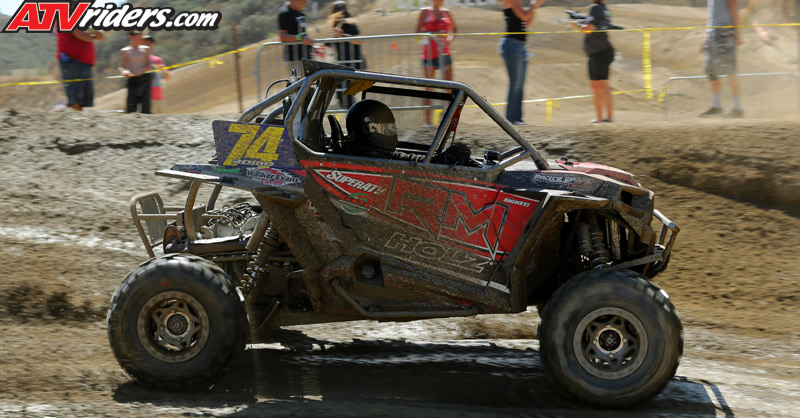 In Pro Stock, Hancock started off his spectacular weekend with a win. Hancock took the lead from the start and held it until the end. Beau Baron was second and extended his lead in points 22. Granlund finished third, followed by Shelby Anderson and Sierra Romo. Hancock was glad to finally put the issues he’s had at Glen Helen behind him. 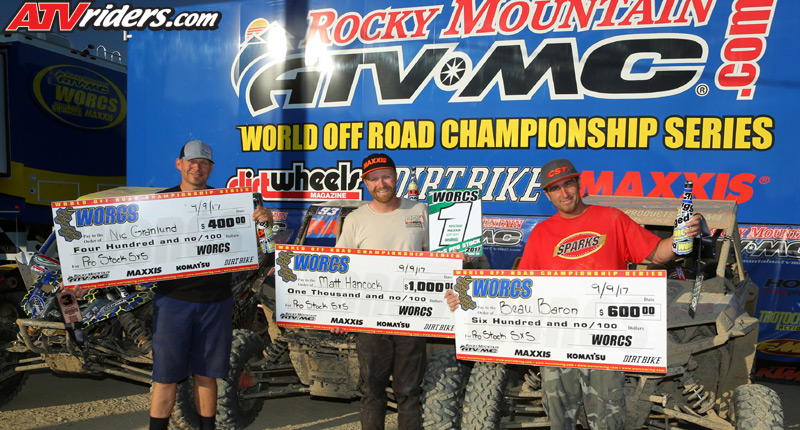 “I’ve always had trouble at Glen Helen,” said Hancock, who moved up to second in points with the victory. “I’ve lost a few championships here and wrecked a couple of times on the quad. I got the holeshot here a couple of months ago, led most of the race and lost it in the last two laps. This race I was ready. I got the holeshot and I just went for it. Beau was behind me, pushing me to go faster. That helped me a lot, keeping those guys behind me and driving like I knew I could. It was great to get my first win here. I’ve been close so many times.” 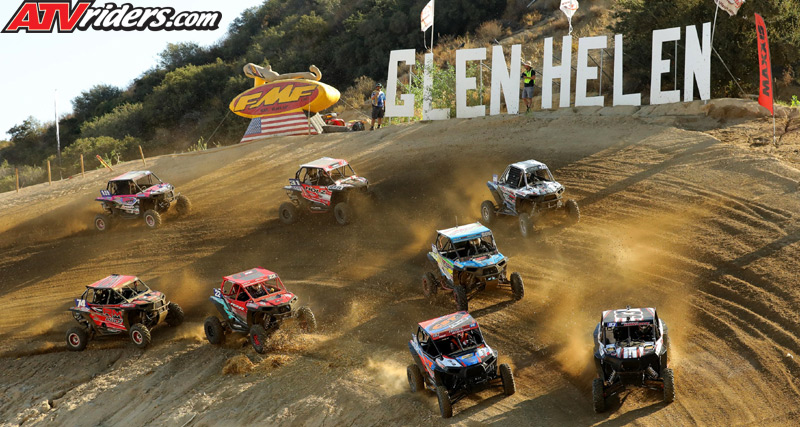 Baron extended his points lead with his fifth podium of the season and second podium in a row at Glen Helen. His third-place finish here in June actually handed him the points lead.

Granlund actually missed the green flag at the start due to visibility issues caused by seating position in his car. Despite the slow start, he dodged lapped cars and overcame a broken axle during the last two laps to score the final spot on the podium. 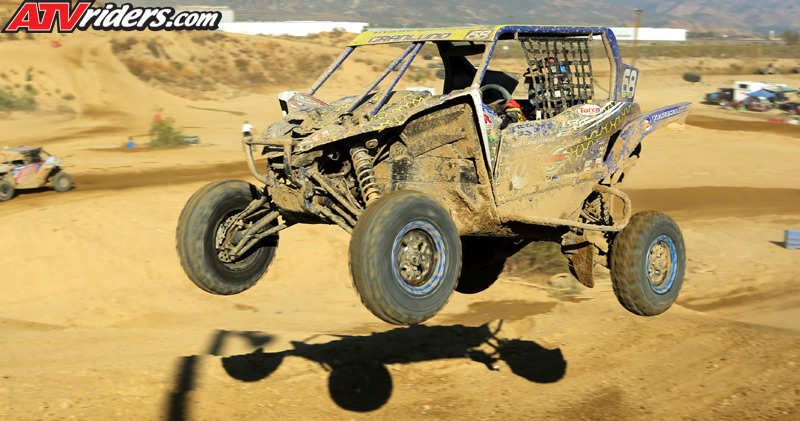 Anderson scored yet another fourth-place finish here, continuing her strong drive this season. Anderson had a mechanical issue early in the race and was nursing an injured shoulder all weekend. 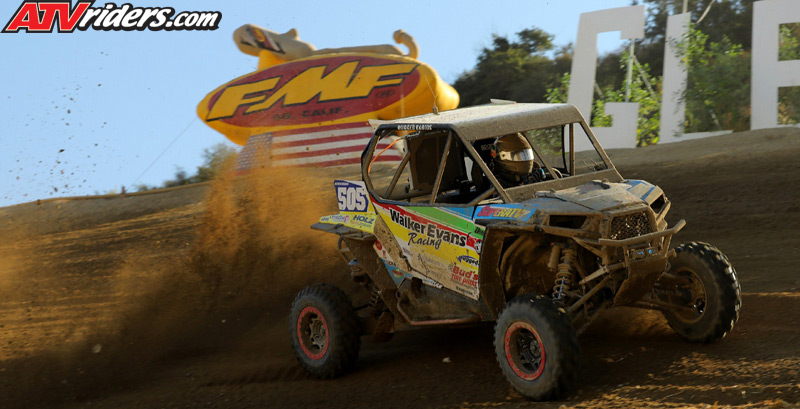 In the Women’s SXS race, Giuliana Flowers scored her second consecutive victory. With her second-place finish, Jennifer Broughton clinched the championship. Emily Green was third in the race.

In SXS 1000 Stock, Gareth Dihel clinched the championship with sixth victory this season. Dihel avoided a carnage-filled start to come away with the win.

The Rocky Mountain ATV MC WORCS Series presented by Maxxis and Dirt Wheels Series finishes out the 2017 season at Adelanto Stadium outside San Bernardino, CA. That race is scheduled for October 6-8.