Devore, CA – Beau Baron padded his points lead in the Rocky Mountain ATV MC WORCS Series presented by Maxxis and Dirt Wheels Pro ATV class by winning his fifth race of the season, at Glen Helen Raceway. Baron won the battle of attrition ahead of the Yamaha of Mike Sloan and the Suzuki of John Rickerd. Only three Pro ATVs were still running at the finish. 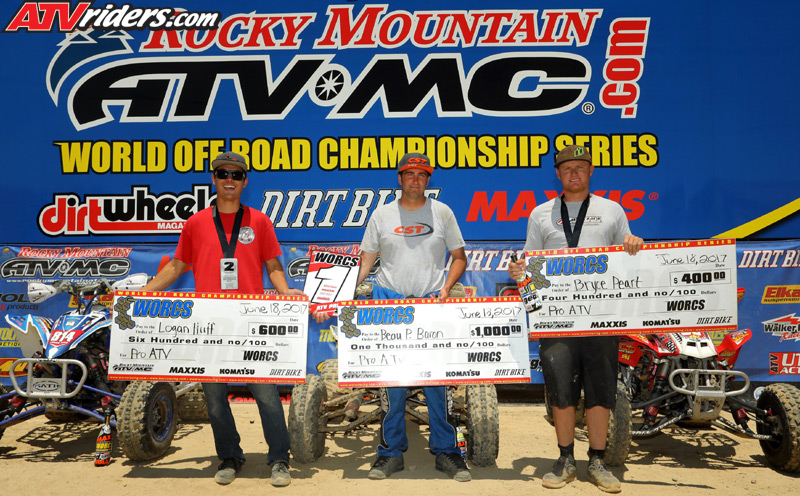 With temperatures closing in on 100 degrees all weekend, WORCS officials shortened the Pro and Pro Am races to just 40 minutes from the normal one-and-a-half hours. The sprint was held on Glen Helen’s traditional motocross track, along with off-road sections and an endurocross area. They ran Pro and Pro Am with A Class, 4X4 and several age classes.

With a muddy track and the intensity of the sprint format, Baron, Sloan, Robbie Mitchell and Collins Webster battled hard early in the event. Baron quickly took the lead after holding off Sloan and passing Mitchell, but behind him mud roost began to take its toll. Mitchell dropped out and Webster took second. Then Webster fell out. Sloan had a mechanical issue, and had to pit for repairs. In the end, Baron survived and he won.

“I guess I was better prepared today,” said Baron. “I knew there were going to be a lot of puddles. I used a lot of tearoffs and put a little foam on the air filter. I did everything I could do to hold off Sloan. After I passed Robbie, I just moseyed on.”

When the white flag waved, Baron was surprised. Despite the shortness of the race and the carnage behind him, Baron had fun.

“Honestly, when they threw the white flag, I felt like I was just warming up,” said Baron. “This was a fun ride. I was having a great time. I really enjoy what I’m doing, even at the Pro level. It’s fun to be racing.”

Sloan survived the physicality of the early laps and held on to challenge Baron. Then an oil plug fell out of his engine and he had to pit. Despite having to pit, he came back out and finished second, earning his sixth podium of the season. 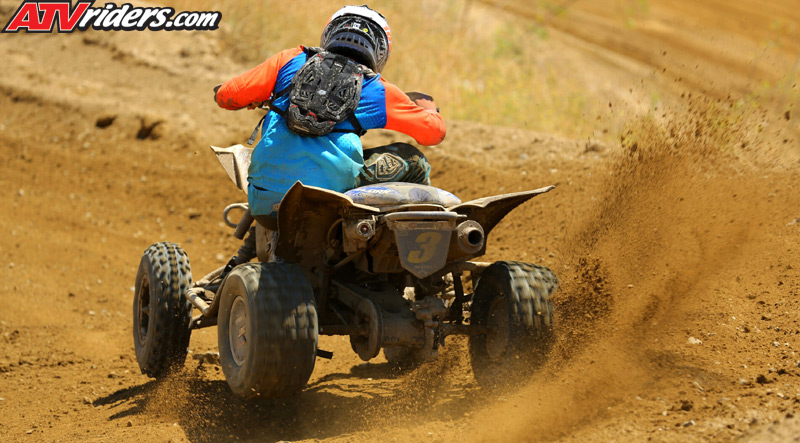 “We were bumping and we were all going for it,” said Sloan. “It was a 40-minute race so the intensity was high and we all wanted to do well. I ran Beau pretty hard and tried everything I had to get by him. One of the engine plugs came out and my bike started smoking. By that time, everyone else broke, so I put in a new plug, put some new oil in and salvaged a second place.”

In Pro Am, Bryce Peart was elevated to the victory with his Honda when Logan Huff, who finished first physically, was penalized one spot for a pit board infraction. Peart finished second overall just behind Baron and pocketed an additional $600 for his efforts. 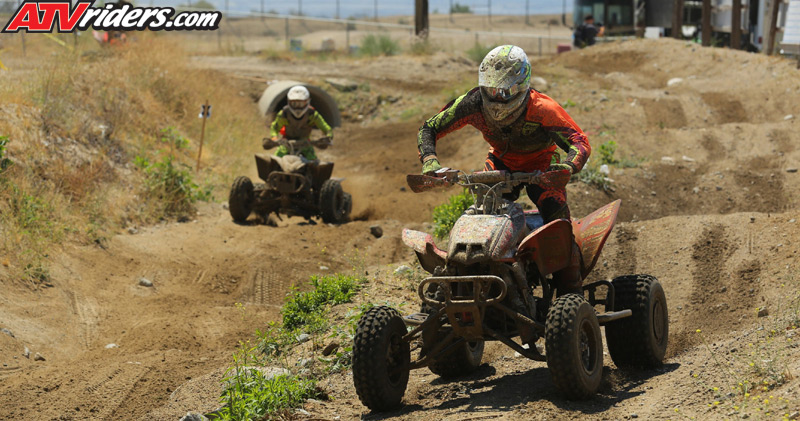 Peart and Huff battled throughout the race with Peart able to hold him off until the final lap. Then Huff struck and took the lead just before the finish. Despite the penalty, Peart gave credit to Huff for his pass. 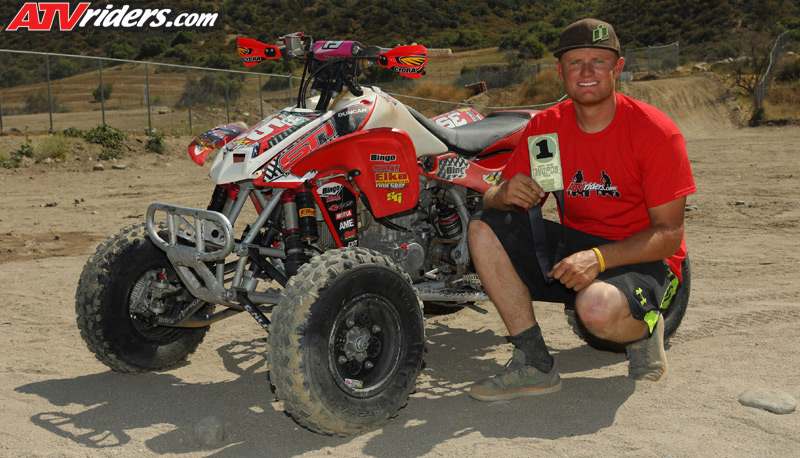 “I did get the win and that helps us out with points, but I still give it hands down to Logan,” said Peart. “He definitely earned the win, regardless of the penalty. I rode the best I could, but he got around me on the last lap. I got second overall. I’m happy with that. Hopefully we can just get better from here. It’s nice to podium with the Pros.”

Huff, on a Yamaha, ran hard during the race. Despite losing the position due to the penalty, he still holds the lead in Pro Am points going into the summer break. He finished third overall and stood on the Pro podium with Baron and Peart. 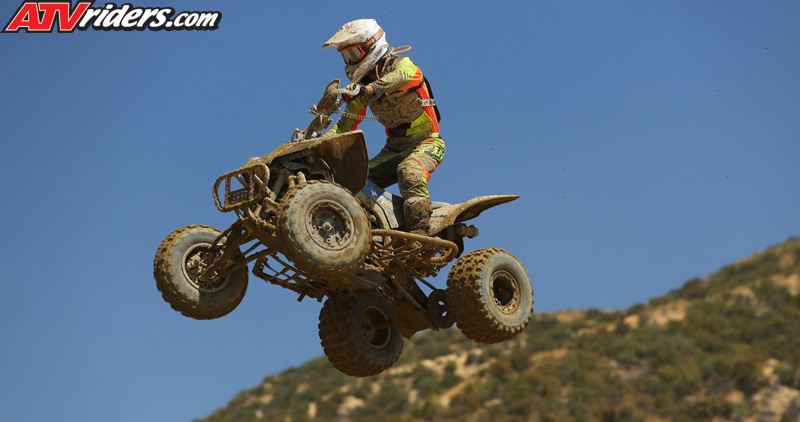 “That was quite the battle,” said Huff. “I made a sketchy pass in traffic and I had Bryce in the air on the tabletop. That was key. I’m just going to keep riding and come back strong. We’re focusing on the Pro lap times.”

Gonzalez had to overcome a host of issues during the race to score the third-place finish. Despite having to change goggles on the first lap due to the mud and issues with his nerf bar, he snagged his fourth podium of the season. 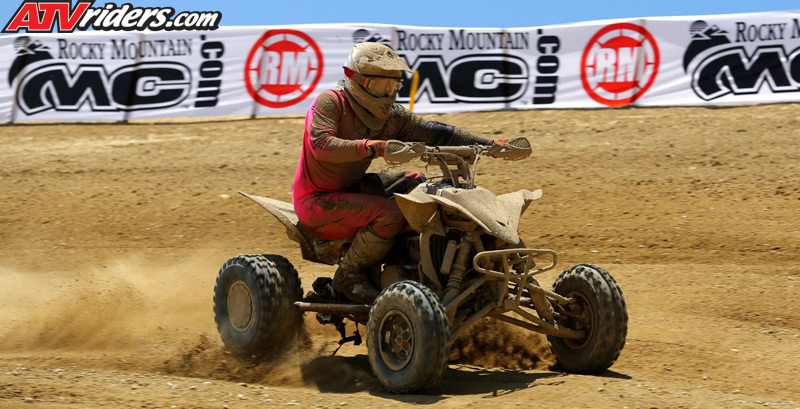 “It was a pretty hot day,” said Gonzalez. “I got a decent start and rode my way to the podium. I definitely had a good battle. We’ll be going hard for the next one.”

WORCS next heads into its traditional summer break before heading back to Glen Helen. That round, the second to last this season, is scheduled for September 8-10.