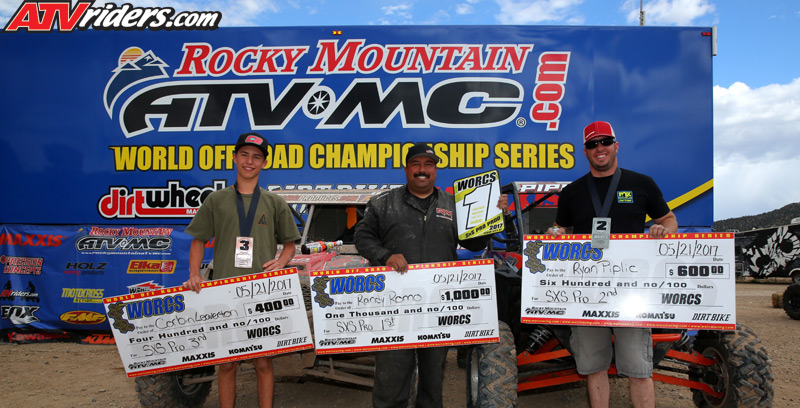 Picture perfect weather greeted the SXS competitors with temperatures in the 60s. Unfortunately, the mild weather resulted in dusty conditions that hampered the competition on the combined off-road, motocross and endurocross track.

The Pro race kicked off with a hard battle between Piplic and David Haagsma. Piplic took the early lead with Haagsma trying everything to pass him. Haagsma put a block pass on Piplic and Haagsma took the lead on the final lap, but before he made it to the finish line, he lost a belt and fell out of the top 10. Piplic finished first physically, but Romo took his first ever WORCS win on adjusted time. 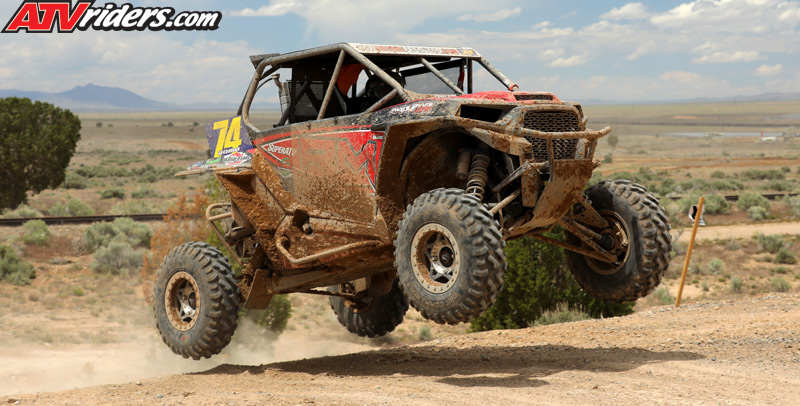 “All day, the turbo worked awesome,” said Romo. “We had no flats, no broken axles, and no diff problems; it just ran great. I started on the second row and it was stacked row. Ray Bulloch and I got first and second on the row and I started picking off people from the first row.”

Piplic’s second consecutive podium, along with Haagsma’s 13th-place finish has shaken up the points picture. Haagsma’s lead in the title chase has been cut to 14 points.

“Consistency is coming back to me,” said Piplic. “I had a rough patch in the first couple of races. Now it’s just consistently on the podium. It will be really interesting to see how this season is going to end.”

Leaverton drove a Polaris XP1000 race and scored the highest finish for a naturally aspirated car in the class. He fought the dusty conditions to score his second podium of the season.

Johnson, also in a naturally aspirated Polaris, started on the front row with Haagsma. Despite having the fight the dust, a little help in setup from Piplic helped him score the top five in the M3 Racing Polaris

Obering rolled out a brand new Yamaha YXZ 1000 with a turbo. He battled with Sierra Romo, holding her off to finish fifth. 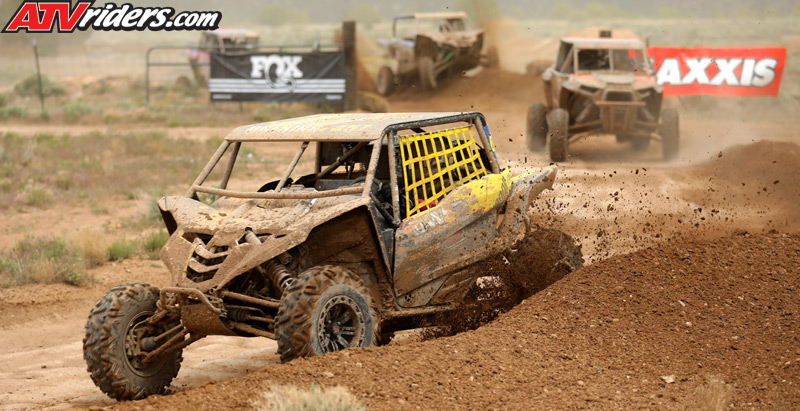 In Pro Stock, Matthew Hancock took the lead from the start in his Polaris, but electrical issues with his cooling fan took him out of contention, handing the lead to Beau Baron, who took the win in his Polaris. Cody Bradbury was second, also in a Polaris, ahead of the Yamaha of Nic Granlund. Sierra Romo and Piplic finished fourth and fifth, respectively, both in Polaris RZRs.

The points race also took a turn in Pro Stock. Baron’s win, combined with Ray Bulloch’s 17th-place finish, puts Baron just five points behind Bulloch in the title chase. “You have a few tough races, you shrug your shoulders and then, all of the sudden, you win a race and it gets you pumped,” said Baron. “I’ve been second all along in this points chase and I gained quite a few points. We’ll take this with a grain of salt, keep pushing and hopefully we can come out with a championship at the end of the year. The dust was hard to recover from. I started off third and I was fortunate to get into the lead. It was difficult to see.”

Bradbury started last on his row and fought dust all race. Granlund had an axle failure on the final lap and Bradbury capitalized to take second. It marked his best finish in Pro Stock this season.

Granlund nearly crashed early in the race in the dust. Recovering quickly, he and Bradbury battled during the waning laps of the event before he finished third. It marked Granlund’s fourth podium this season.

In the Pro Women’s race, Amanda Sorensen worked her way from the back and stopped Jennifer Broughton’s win streak at five. Sorensen put a thrilling pass on Broughton just before the finish to score the victory in a Yamaha. Broughton was second in a Polaris. Giuliana Flowers came out ahead of a hard-fought battle with Emily Green to take the third spot. Both were driving Polaris RZRs. Claudia Romo was fifth, also in a Polaris.

“With the dust, it was really challenging today,” said Sorensen. “The finish was so close, but it was a great race. I pulled an outside-inside pass on her. We worked so hard for this and it was a good weekend. I love the Yamaha. I feel more in control and more involved. It makes for a better race.”

Broughton was not pleased having the win snatched from her just feet from the finish line. The consolation is her 31-point lead in the championship. “We had a good battle,” explained Broughton. “Rubbing is racing, I guess. I saw the checkered flag and then I saw it blow away.” 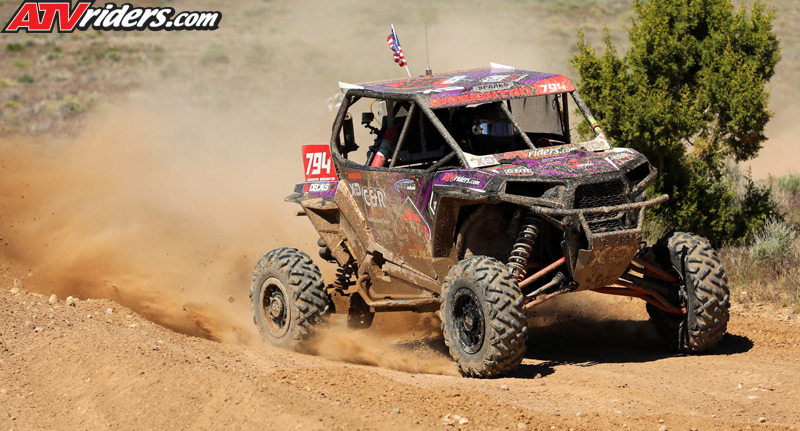 The WORCS Series will next head to Glen Helen Raceway in Devore, CA for a Father’s Day weekend race June 16-18.