The ATVs started with the motorcycles on the track, which featured deep sand whoops, rocks and boulders and several technical sections. Mitchell, long the king of WORCS dead engine starts, snagged another holeshot, but overcooked a turn on the first lap and flew over the bars of his machine. Row took the lead from there and never looked back.

“I got out to a good start and made passes really quickly,” said Row. “I checked out on everyone, hit my lines and rode smart in this sandy race. I don’t know what it is about the sand. I just feel so confident and it’s so fun. I was hoping I could be a podium contender today, so it was pretty cool to be on top. It’s been two years since I won, and they both came at the same track. Beau had a big hand in getting me to come back to WORCS.”

Baron, Sloan and Webster all battled it out for second during the waning laps of the race. Sloan’s machine got stuck in the scoring chute, while Row got away. After Sloan got going again, Baron made the pass for second, but Row was too far ahead for him to mount a charge. The runner-up finish allowed him to pad his points lead to nearly a full race. 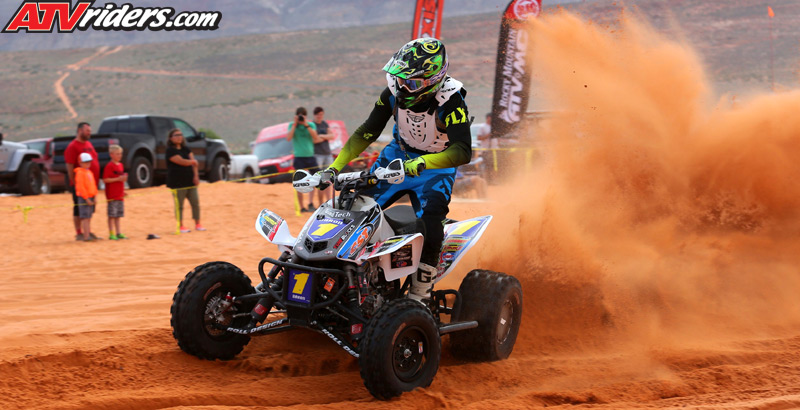 Mitchell was happy to survive his scary crash unhurt. After remounting his quad, he ran a slow pace for a few laps before charging up into the top five. “I caught a square edge and I went over,” said Mitchell. “I tried to settle in to see how I felt the first couple of laps to make sure I didn’t really hurt myself. I started to push really hard and found some lines. It’s been up and down this season. I’ve had a big win and a big crash, so the next one ought to be good.”

Webster was in the thick of the action for most of the race, showcasing a continuation of his break out season. Webster had tracked down Baron and was attempting to capitalize on a mistake. Unfortunately, fueling issues slowed his charge on the final lap.

In Pro-Am, Bryce Peart won his first race in what has turned into the most competitive class in WORCS ATV racing this season. Logan Huff was second, ahead of Tyler Benally. Huff, Benally and Peart now sit first, second and third in the championship, respectively, with just six points separating the three. 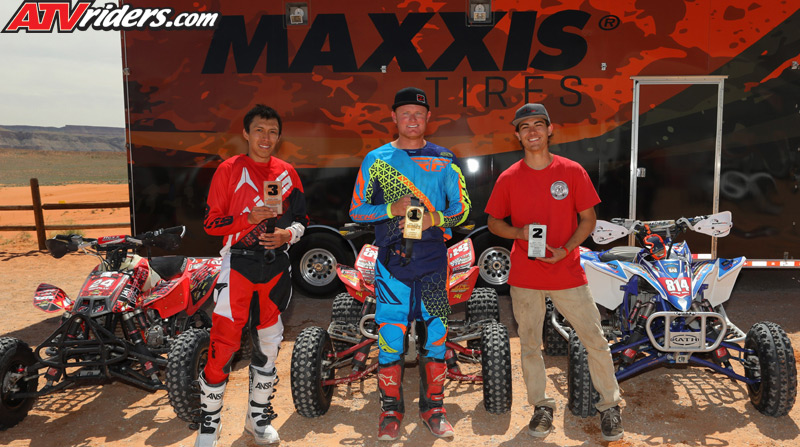 “It was rough and it only got rougher and rougher,” said Peart. “I’ve been working pretty hard and it finally paid off. Collins Webster talked me into running Mesquite and I was hooked.”

Huff said suspension adjustments helped him with the rough track. He led the first five laps before arm pump sent him to second at the finish.

Benally shook off bad luck experienced in the last race and came home with his fourth podium of the season. He ran a conservative pace after realizing Huff and Peart were significantly faster in the sand.

The next race for the WORCS Series is scheduled for May 19-21 at Iron Mine Racepark in Cedar City, UT.