The Orleans Casino race was similar to the event held at a different venue in Las Vegas last year. The circuit was laid out in The Orleans Arena, as well as the parking lots surrounding the casino. It featured a mix of hard-pack dirt and asphalt, combined with steel ramp jumps outside. The arena comprised a log section, sand pit, tractor tires and a big double.

Robbie Mitchell has long been known as the unofficial king of dead engine starts in WORCS competition and he put that moniker to good use here. After snagging the holeshot on his Honda, he battled Baron through traffic and the tough course. During the final two laps of the 45-minute race, Baron turned up the pressure, but Mitchell held on for his first victory of the season. 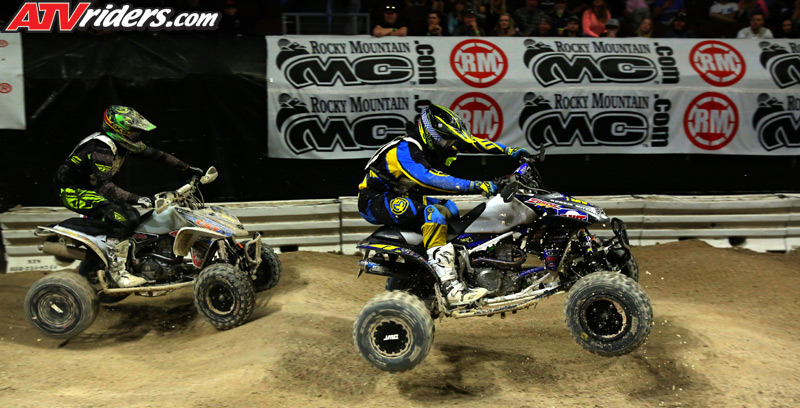 Mitchell reversed the bad fortune he had in last season’s Las Vegas round. In that race, Baron took the lead on the final lap to earn the victory. With this year’s win, Mitchell broke Baron’s win streak, which stands at four.

“I didn’t want to lose it the same way this year, and I wanted to end the streak,” said Mitchell. “I was just trying to keep him back there and try to put down some good laps. Early on, I was struggling in the corners with the asphalt. Then I settled down and cleaned it up. I knew he was coming strong as soon as I saw the white flag.”

Beau Baron, on a Honda, tried everything in his toolkit to pass Mitchell. He was one of the few riders able to double the arena jump, but with Mitchell in the lead, he wasn’t able to double the jump. Finally, he attempted to “move” Mitchell with his front bumper, but Mitchell shook off every advance. 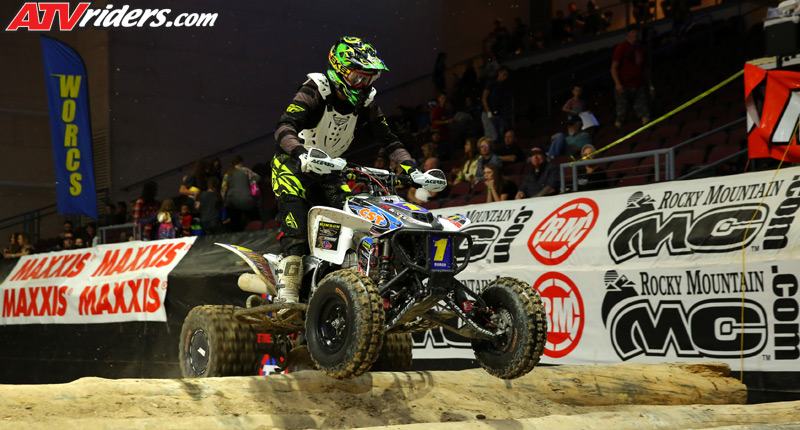 “I ran him down fairly early and tried everything I could,” said Baron. “He had all of the lines dialed. The only thing I could do that he couldn’t was double the jump in the arena. But with him in front of me, I couldn’t double it. On the last lap or two, I bent my bumper on him and I couldn’t get him to move. There was just nothing I could do. He was solid to the finish and my hat is off to him.”

Collins Webster and his Yamaha scored his second consecutive podium. Webster has had a slow start this season due to a switch to the Yamaha and bad luck, but he has been running strong since his first podium of the year at the last race. Webster, who lives in Las Vegas, was happy to podium his hometown race. 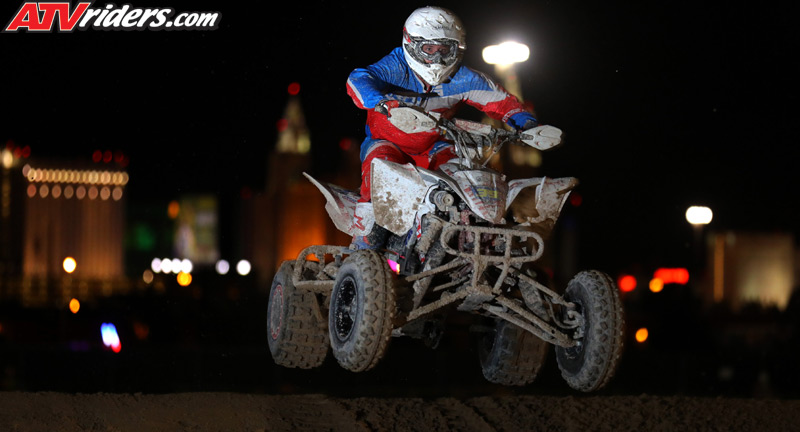 “I managed third place for most of the race,” said Webster. “I spotted Josh and I kept him where he was. I maintained my spot, worked it out and got a third. I was racking my brain all day and I haven’t ridden since the last race. So I was jittery. After all of that, it feels good to podium in my hometown.”

Josh Row, who started last on his Honda, made the best of his situation and made up a ton of time late in the race. Row returned to WORCS here after missing the last race due to school. 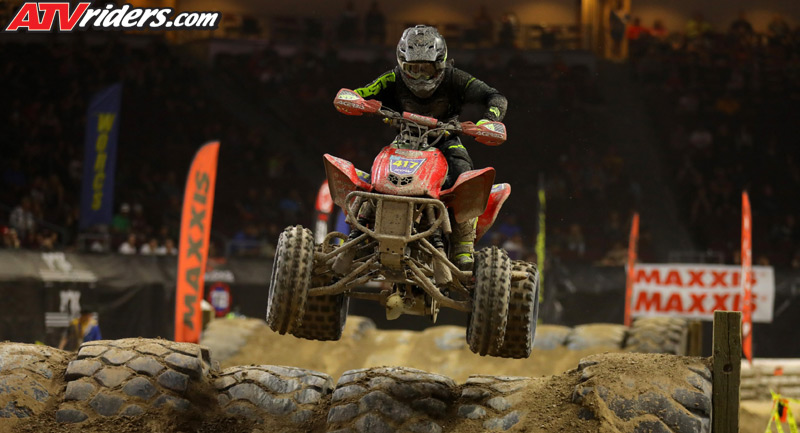 “It’s frustrating to have to work from the back, but hopefully we can get the starts figured out and move forward,” explained Row. “Toward the end, I started pulling on Collins. The asphalt is a totally different element. The tires and logs; usually we don’t have to deal with that. It was a different challenge and I had a blast. I had to miss Havasu because of school, but my plan is to make the rest of them.”

Mike Sloan rounded out the top five in the pro class, which allowed Mitchell to take over the second spot in points.

In Pro Am, Ricardo Gonzalez continued his climb on the podium with his first victory of the season. Gonzalez held off Sanders to the score the victory.

“Everyone that has helped me, I appreciate it,” said Gonzalez, who finished second and third in the last two races. 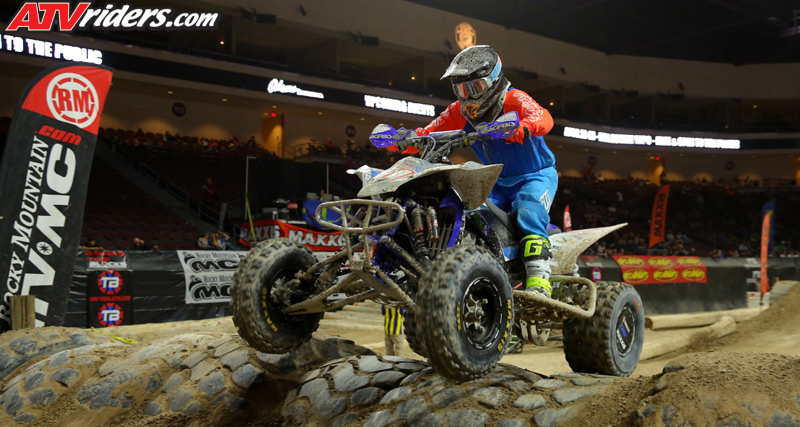 Ty Sanders was challenging for the lead when he clipped a tire. He climbed all the way back from sixth to score his second podium of the season on his Honda. “I slid wide and clipped a tire, so we dropped back to sixth,” said Sanders, who also won the Open A race earlier in the weekend. “I made up nine seconds on the leader in two laps. A win and second are good on the weekend.” 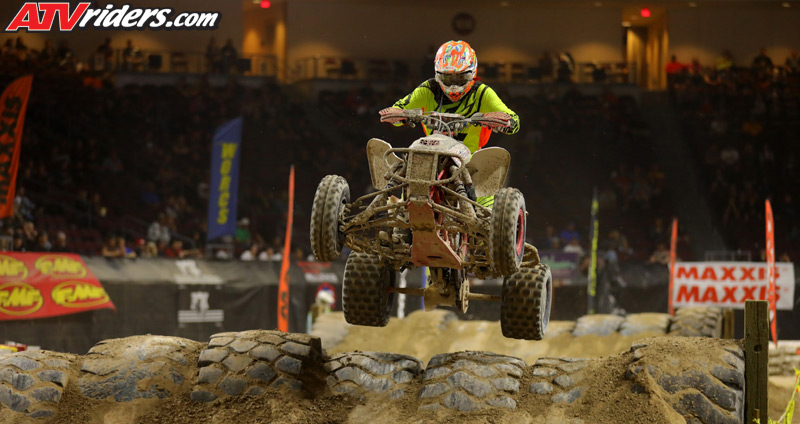 JoJo Semas was making his Pro-Am debut this weekend. The Open A veteran thought it would be a fun race to make his first Pro-Am start and he came away with a podium. 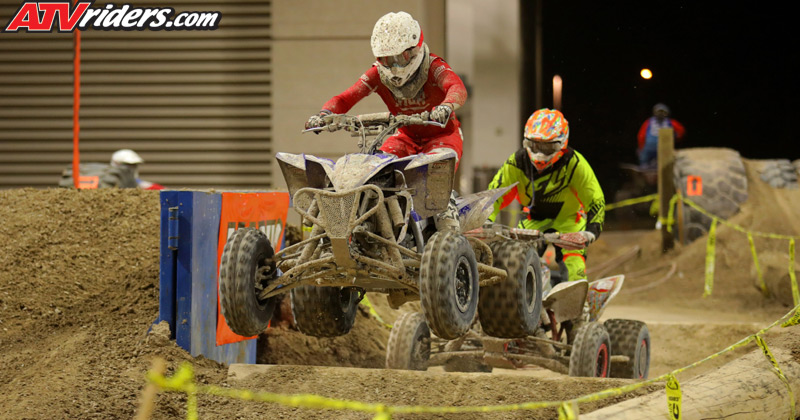 “I decided it would be a fun race, and it definitely went well today,” said Semas. “I got second in Open A yesterday and I was glad to keep the momentum going today in Pro-Am. The track was phenomenal.”

WORCS series heads to Sand Hollow in Hurricane Utah for the next round of racing on April 21-23.