Ray Bulloch won the Pro Stock race, ahead of Corbin Wells., and Shelby Anderson claimed the final spot on the podium, making it the second consecutive race that a woman racer finished on the Pro Stock podium.

The unique event was held in the arena and parking lots surrounding the casino. The track featured a varied terrain comprising dirt, asphalt, logs, tractor tires, a sand pit and even a motocross style double. The race was started in rows of four based on points.

Carnage was the name of the game as David Haagsma took the holeshot from the front row, but lost the lead to Cody Bradbury on the first lap. Bradbury cut down a tire, handing the lead to Haagsma before he began experiencing issues and faded back out of the lead. From there, Piplic, who started on the third row in his Polaris RZR, began a time battle with Baron and his Polaris. In the end, Piplic just edged Baron out for the victory. 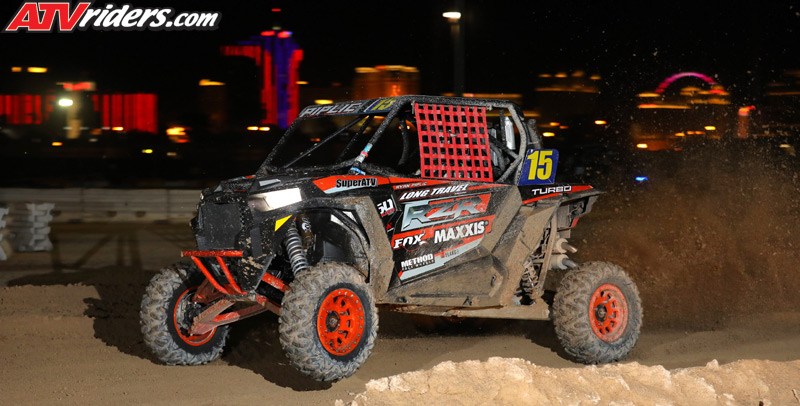 “I had mixed emotions coming into this race because I didn’t do well in Las Vegas last year,” said Piplic, who was the only racer that kept his headlights on his car after the last race, which gave him an advantage in the dimly lit parking lots. “I was really surprised at how quickly I was picking people off. The challenge wasn’t in the obstacles. It was in the asphalt. It was really slick and if you didn’t do it right, you’d spin out.”

Ryan Piplic rebounded from the last race at Lake Havasu, where bad luck seemed to hit him at ever turn. He finished 15th there, though he is now right back in contention for the championship, 30 points behind Haagsma.

Beau Baron started on third row and laid back early before turning up the wick. While many in the field where throwing their cars into the corners, Baron took a more calculated approach and scored his first podium of the season in his Polaris. He now sits fifth in points. 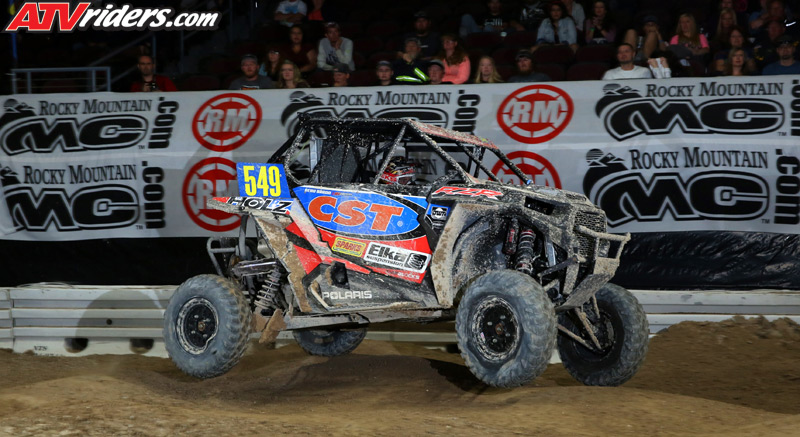 Nic Granlund, who was running just his second Pro race this season, started well back in the field. He avoided the carnage in his Yamaha to finish third and recorded his second podium in as many starts.

David Haagsma had difficulties with the track’s pavement sections. After practice, officials watered the track and the asphalt went from tacky in practice to slick in the race. He ran a smart race, finished fourth and now owns a 28-point lead in the title chase. 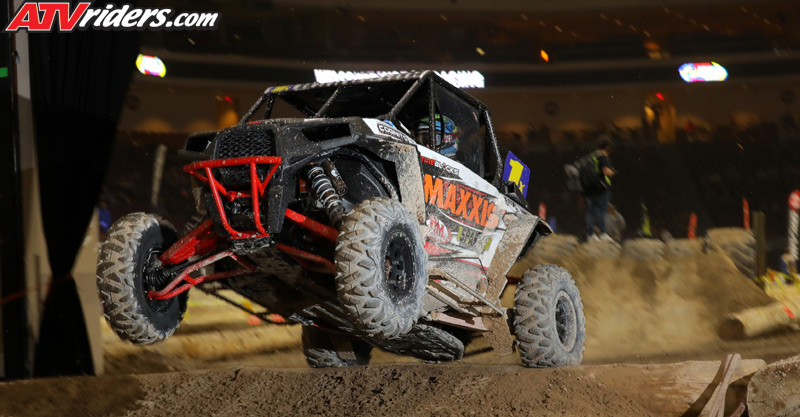 In Pro Stock, run on Sunday, chaos again ensued. Baron, Bulloch, Bradbury and Granlund led the field from the front row and all four tangled on the first lap. Baron held the early lead before flipping over a few turns in after contact with Bulloch.  Bulloch and Granlund swapped the lead back and forth till Granlund lost a wheel giving the point to Bulloch. From there, Bulloch dominated. 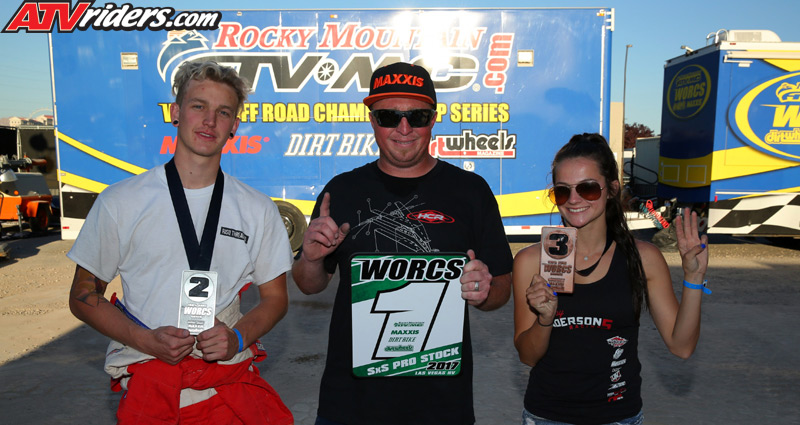 After a disappointing showing in the Pro race, Bulloch had to drive home to Cedar City, UT to deal with a family issue. In his absence, Bulloch’s team completely changed the setup on his Polaris. Bulloch continues to lead the Pro Stock points, now by 19 ahead of Baron and Anderson.

“My mechanic Rusty went the extra mile and he nailed the setup,” said Bulloch. “It was a gnarly race. This course had everything and we pulled it off.” 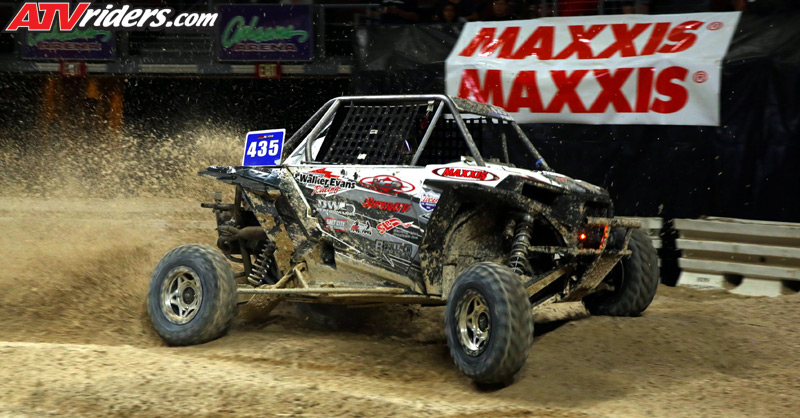 Corbin Wells finished second on adjusted time, marking his first podium of the season. Wells drove a smart race and battled Matthew Hancock to secure second in his Polaris.“I just held it together today,” said Wells. “Everyone was just sort of falling apart, which was easy to do. I made a few passes and I started to move up.”

Shelby Anderson scored her first career podium. In the process, she became the second woman racer in WORCS history to finish on a Pro podium after Sierra Romo finished third in the last race. Anderson used the skills she honed in the TerraCross Series to successfully navigate the tight course. 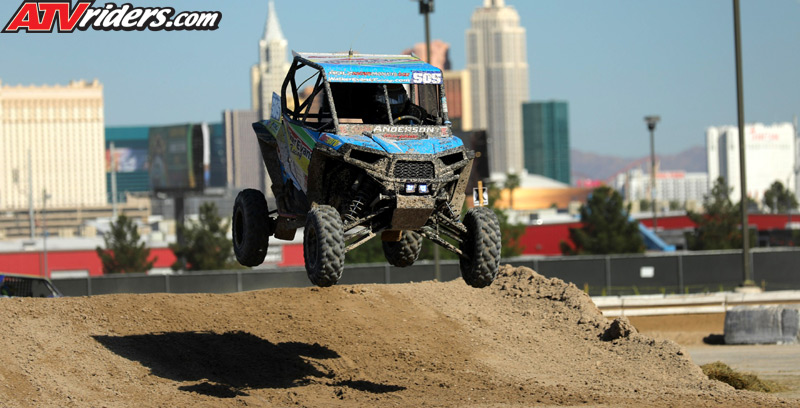 “I’ve had some pretty bad luck this year, so pulling off a third in my first year in Pro is more than I could have asked for,” said Anderson, who now sits third in points. “Knowing that I caught all of these guys, I was happy to get this. It’s pretty cool how Sierra and I are showing how we can run with these Pro drivers, especially considering this is our first year. This race was a lot like TerraCross. I just held my pace, took care of my car and brought home second.”

In Women’s SXS, Jennifer Broughton won her fourth consecutive race, ahead of Madison Durade and Emily Green. Broughton now leads the Women’s championship by 16 points ahead of Green. 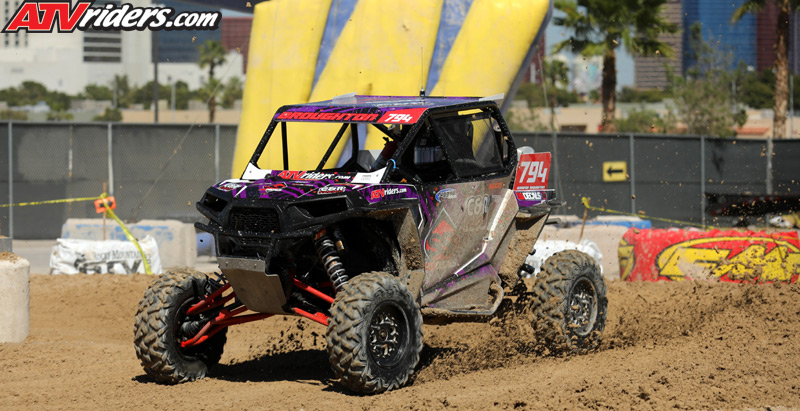 The next race for the WORCS SXS classes is scheduled for April 21-23 at Sand Hollow in Hurricane, UT.