Lake Havasu City, AZ – Blayne Thompson secured his first win of the season at the Round 4 of the Rocky Mountain ATV MC WORCS Series presented by Maxxis and Dirt Bike  held at the Crazy Horse Campground in Lake Havasu City, Arizona.  Thompson overcame a string of bad the past two rounds to secure a finish in the number one spot ahead of Gary Sutherlin and Robby Bell on the Podium. Eric Yorba finished a season best fourth ahead of Justin Seeds in fifth. Alex Dorsey claimed his  win the Pro 2 class, and Austin Serpa won the Pro 2 Lights class.

With near spring break in full force in Lake Havasu City and temperatures soaring well into the 90s, there was a huge crowd of race fans watching the racing action from beach. The ever popular Lagoon Jump was back again this year, and the with the higher lake levels the racers were taking advantage of the water on the track  to cool off during the race.

Travis Damon took the early lead on the second lap on his Honda from holeshot winner Brock Reveal. Damon recorded the fastest lap of the event and was running a blistering pace. Unfortunately, the heat took its toll and he faded, handing the lead to Thompson. Thompson then fought off Bell and Sutherlin to record his first win of the season. Sutherlin now holds the points lead by 19 points ahead of Seeds and Bell, who are in a numerical tie. Damon is fourth in the standings.

The victory for Thompson was made sweeter by the fact that he fell out of the last three races while leading on the final lap. Once he took the lead, he ran a hard pace to ensure he stayed in first at the finish.

“For the first three rounds we had nothing but issues,” said Thompson. “I knew if I got the lead I was going to push. I did and it worked out, finally. This is the roughest and hottest race of the year so it feels good to win this one. We’re going to come back and try to win Vegas like we did last year.” 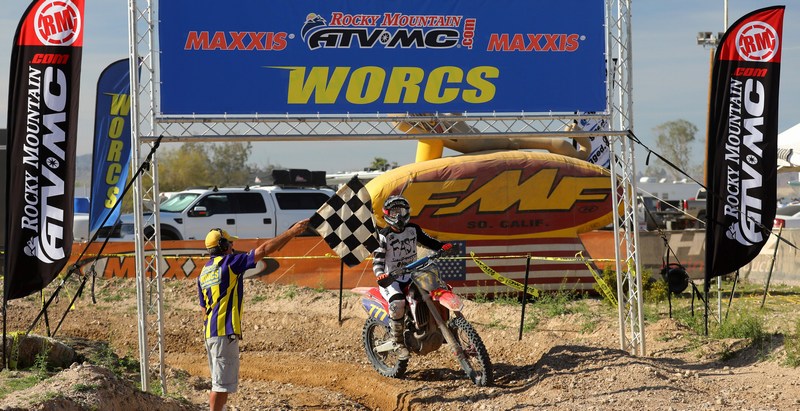 Gary Sutherlin scored his fourth podium of the season. He was betting on the race running one more lap and he had hoped to challenge Thompson at the end. Unfortunately, Sutherlin’s calculations fell one lap short and he finished second. 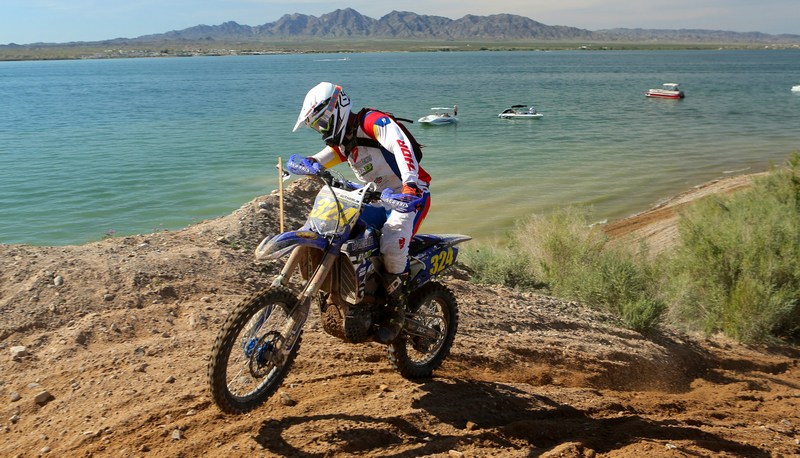 Robby Bell simply ran out of conditioning at the end of the race. Dehydration took its toll at the end, but he hung on to finish third, earning his third podium of the season. 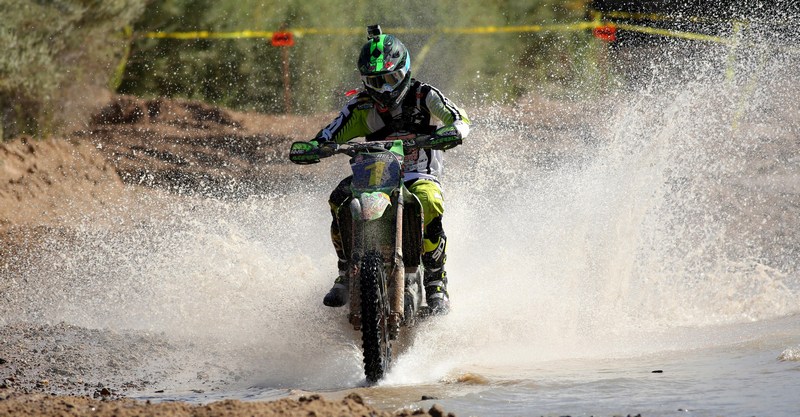 Eric Yorba scored his best finish of the WORCS season after coming off a podium last weekend in Big Six. He recovered from a hard crash on the second lap to snag fourth. 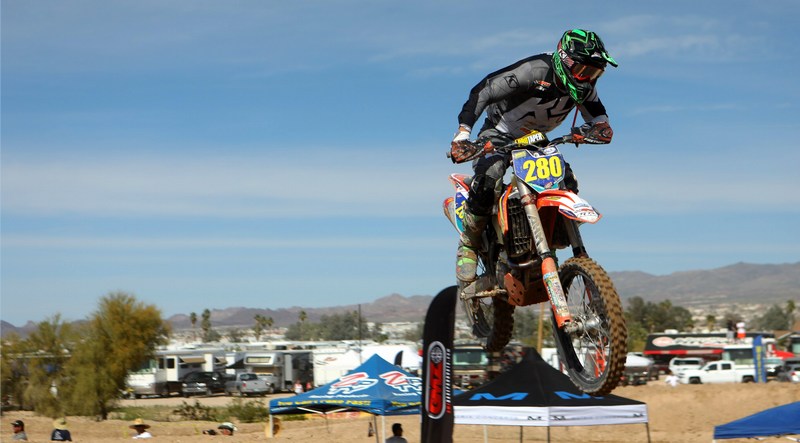 Justin Seeds charged hard at the beginning of the race. He admitted to getting tired and overheated during the difficult conditions and was pleased to come out with a top five.

In Pro 2, Alex Dorsey snagged his first ever WORCS victory. Dorsey ran a consistent pace throughout and took the lead on the final lap when Dante Oliveira pulled into the pits briefly on his KTM. Oliveira held on for second, ahead of the KTM of Kyle Mercier. Oliveira leads the title chase by three points, ahead of Logan Chambers and Dorsey. 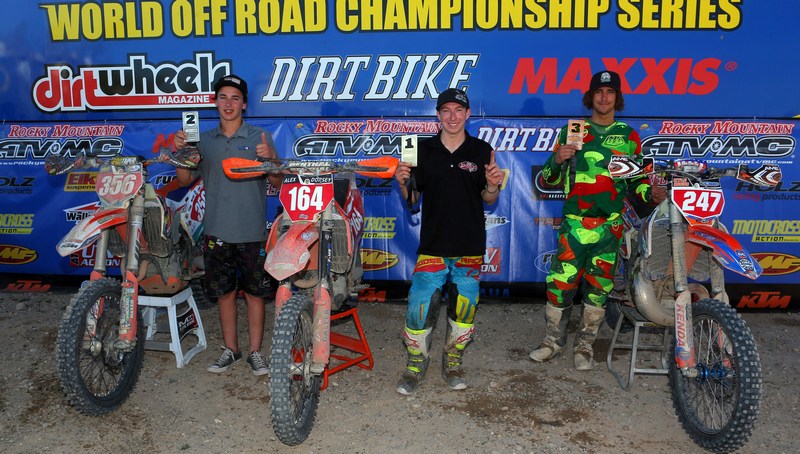 “This is my second year in WORCS and I’m happy to be here in first,” said Dorsey. “I’ve been putting in a lot of work because I knew this race was going to be brutal. I drank a lot of water during the race. I had my Camelback filled up and I took a drink from it every time I went through the scoring chute.” 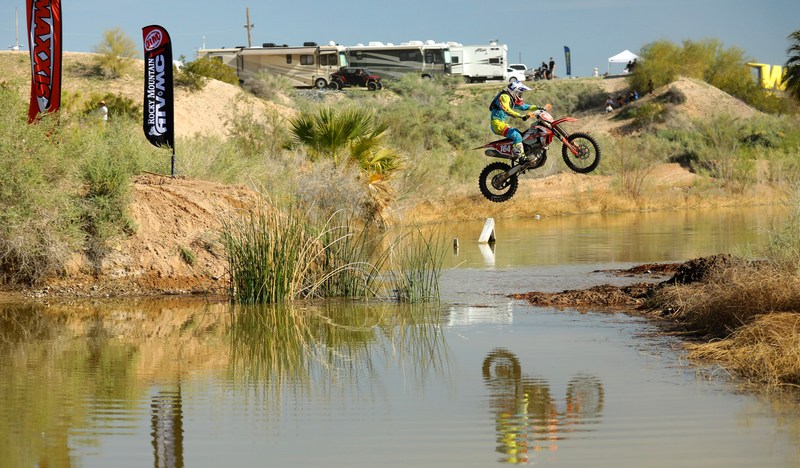 Dante Oliveira led virtually every lap until the last one. He pulled into the pits with a mechanical issue, but was able to get out quickly to nab the runner-up finish. 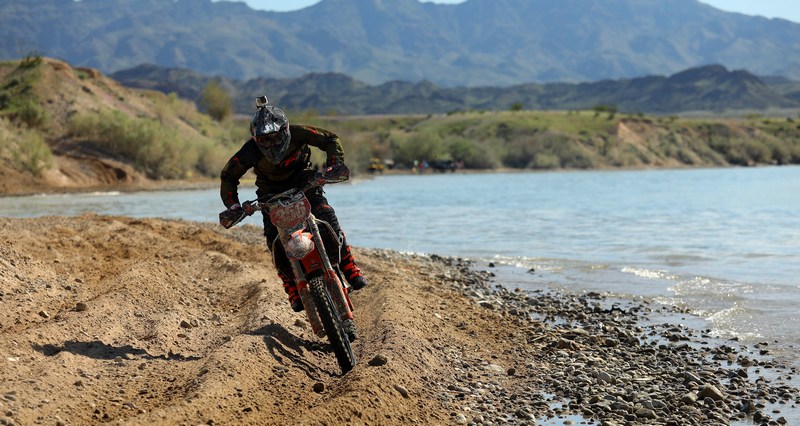 “I had a bit of a bike problem the last three laps,” explained Oliveira. “I pulled in really quickly. I really should have stayed out and kept pushing. The heat was super gnarly. Going through the water every lap, I dragged my legs to cool off.”

Kyle Mercier grabbed the holeshot at the beginning of the race, but was quickly overtaken by both Oliviera and Dorsey. He was happy with his first podium of the season.

In Pro 2 Lights, Serpa won his second race of the season after battling Clayton Hengeveld. Hengeveld finished second on a Kawasaki, followed by Cooper Abbott’s Yamaha. Serpa leads the points by just one point on Hengeveld.

“I just paced myself from the start,” said Serpa. “I sprinted one lap and then kept a fast pace for the rest of the race.”

The Rocky Mountain WORCS Series presented by Maxxis and Dirt Bike Series stays in Lake Havasu for ATV and SXS racing next weekend, March 17-19. The motorcycles are back in action during the Las Vegas rounds March 31-April 2.