Posted on February 27, 2017 by Podium Promotions Leave a comment 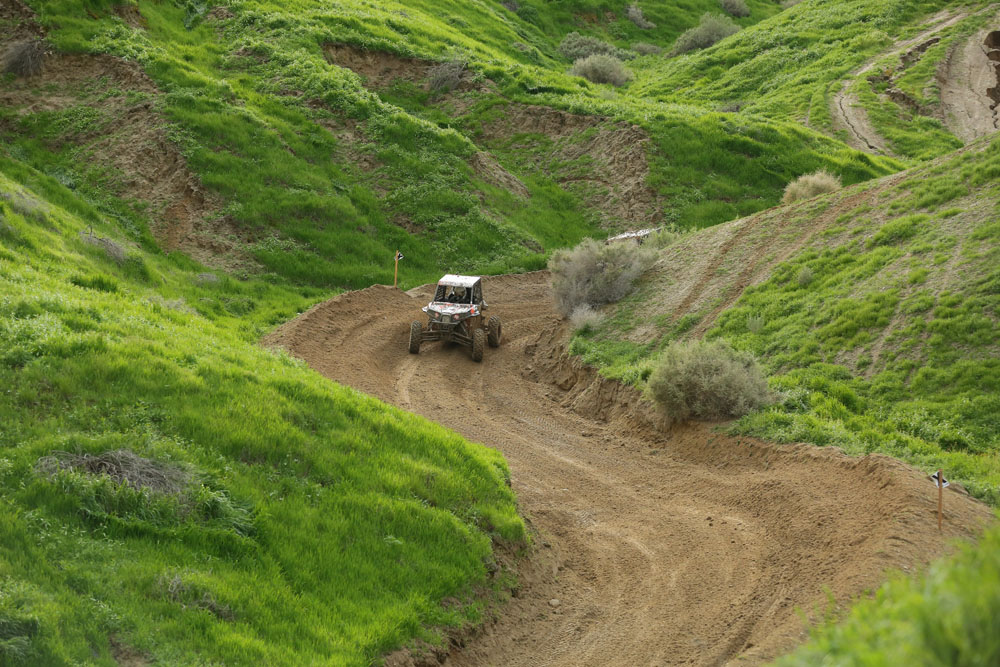 Taft, CA – WORCS round 3 is complete and it was another muddy adventure!  After driving through flooded freeways and mudslides, we arrived at Honolulu Hills Raceway in Taft, CA the night before the race.  The rain had stopped and I was hoping it would hold off through the night so the track would have a chance to dry out a little.  On Saturday morning, I looked at the track as much as I could from up top and the track conditions looked pretty good from where I was standing.  We lined up later in the afternoon behind the SXS Women’s and SXS 900 Production classes.  There were 7 cars in my class.  As the green flag dropped, the Women’s class took off first.  30 seconds later, the next green flag dropped for the 900 Production class.  I loaded up and watched the flagger.  My class was next in line to take off.

The flag dropped and my class took off from the line.  I got out in front and took the hole shot as we rounded the first turn.  Skyler Bulloch and Jacob Peter were on my bumper as we headed out on to the course.  I was able to put a little gap between Bulloch and I in lap one, but had to stay on the gas driving hard and fast to keep my lead.  I stayed in the number one position for the first half of the race, but then as I was coming down off of one of the big hills, I realized I had lost my brakes.  I radioed ahead to my pit crew and told them what was going on.  I had slowed down to compensate and that allowed Bulloch to catch back up to me.  He passed me on a sharp turn.  I stayed with him, but my crew chief wanted me to pit so he could look at my brakes.  The rear driver’s side brake caliper had come completely off and there was no quick fix.  My pit crew sent me back out on the course with no brakes to finish the race.

I had lost some time in the pits, but I was still in the 2nd place position.  I drove as fast as I could, but I was not able to catch back up to the first place finisher in the last 4 laps of the race.  I finished the race in 2nd place.

We have a couple of weeks off now, and my team and I are working on my car and making improvements as we go through each race.  I am happy with the progress we have made in a short amount of time.  I am very fortunate to be supported by these great companies: Got Sand Performance, Mad Racing, Method Race Wheels, Crow Enterprizes, Factory UTV, GBC Motorsports, RT Pro, Yoshimura, Demon Powersports, Baja Designs, Gates G Force, Elka Suspension, Rugged Radios, Maxima Racing Oils, Crown Performance Products, Surface Sun Systems, Butter Supply Co, Pavement Recycling Systems, Perrault Motorsports, and my parents who make this possible for me!  Thanks to Harlen Foley for taking amazing pictures of us and to WORCS for running an awesome series!  I am looking forward to racing rounds 4 & 5 at the Crazy Horse Campground in Lake Havasu City, AZ next month!  You can check out the Sims188 Race team on Instagram @csims188 or on Facebook at www.facebook.com/csims188/.