Posted on February 23, 2017 by Podium Promotions Leave a comment 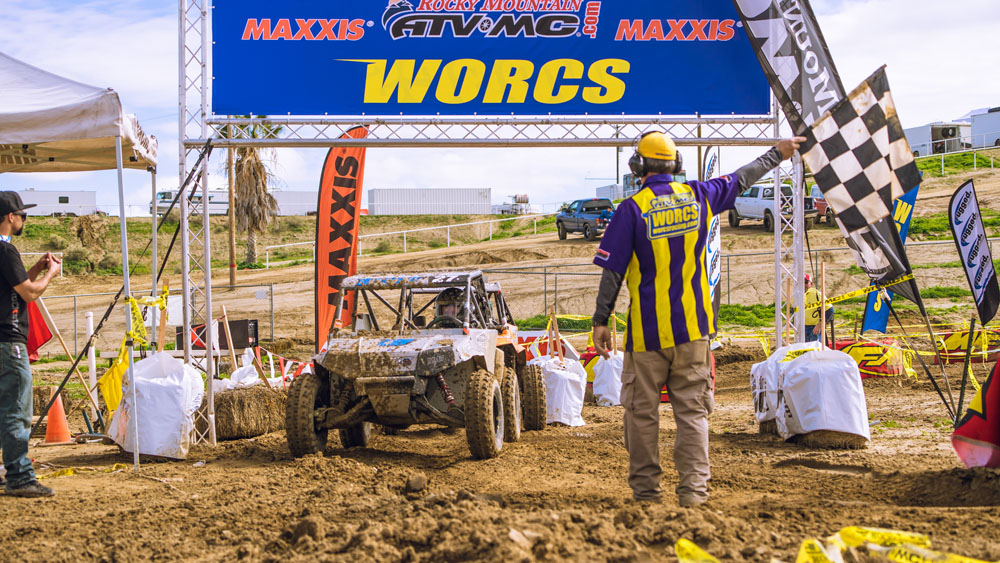 WORCS Round 3, Taft, CA- We had (4) days to get #badblood27 ready between races and after the last weekend, we had a lot to do. Within the (4) days we replaced the entire clutch, opened the engine and made some adjustment, redesigned a new intake and sent her away to get tuned on a Dyno. Have a lot of amazing people that help me out!

It had rained all week and was coming down hard on Friday, practice was cancelled. With races all day Saturday, the track conditions were ugly. Sunday morning came and it was time to race!

Hopped in #badblood27 and waited at the gate, unfortunately didn’t get there early enough and had to pick the farthest/ driest spot on the starting line. I was good though, I was focused and ready to drive my hardest. Green flag dropped, I had a great jump but got caught halfway up the line in mud that slowed me down. Took the first turn and had the third place position. It was approximately a 5 minute lap, with a min. of 30 minutes per race. The car felt great, I was now feeling comfortable with the track and was ready to make moves.

By the 1st turn in the second lap I had made the pass for the 1st place position. Second place was on my tail until we came around to the timing shoot for the start of the third lap and he rolled. Gaining over a 2 minute lead on the next guy back, I slowed down to save my car. Than out of nowhere in lap 5, my buddy that I was battling with before was coming in hot! It was time to get back on the gas and go! By the beginning of lap 6, the white flag was out and we were back at it again.

We had a consistent (5) minutes of nonstop action, it was awesome, as we came in from the last turn he couldn’t catch me and I got the checkers and won! Best race ever!
I’d like to thank my amazing sponsors for their support: Magnum Offroad, Mad Racing, Walker Evans Racing, SuperATV, Big Gun Exhaust, Fly Racing, Crow Enterprizes, GMZ Race Products, Gates G Force, Rugged Radios, Danbury Racing, Perrault Motorsports, Magik SC, RK Excel, PRP Seats, and my parents who make this possible for me!  Thanks to Polaris RZR for making these awesome machines! Round 2 of Dirt Series and Round 4 & 5 in Lake Havasu for WORCS in March is right around the corner, time to get prepping.