Taft, CA – “Turbo? I don’t need no stinkin’ turbo.” That phrase was clearly going through David Haagsma’s head as he drove his naturally aspirated car to his first Pro SXS victory of the season at Honolulu Hills Raceway. The event was the third round for the Rocky Mountain ATV / MC WORCS Series presented by Maxxis and Dirt Wheels. Nic Granlund finished second, ahead of Larry Heidler. Ryan Hilt and Corbin Wells completed the top five. 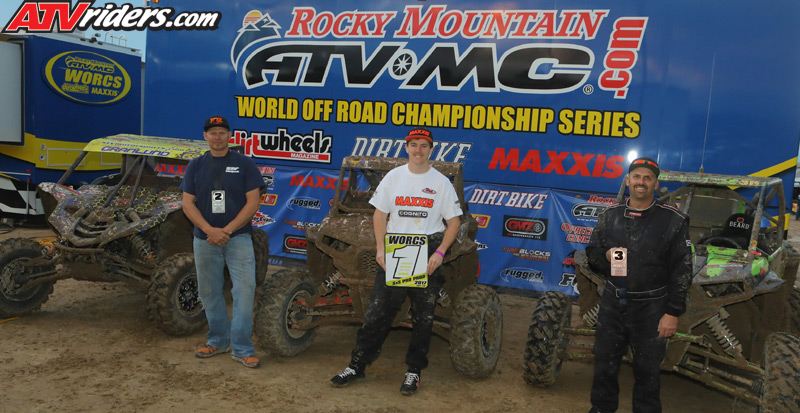 After the track flooded on Friday due to torrential downpours from Winter Storm Lucifer, competitors expected a mud fest. Instead, with WORCS officials working overtime on the track, the event turned out to be one of the fastest this season…that is if you weren’t driving a car with a turbo.

Several of the top competitors running turbocharged cars fell out early in the event with issues, leaving Haagsma to laugh all the way to the finish line. The initial start was waved off due to an issue with course markings. On the restart, Haagsma was quickly into second and he took the lead shortly thereafter when Ryan Piplic’s car fell out with mechanical issues. From there, he ran a flawless race taking the win, as well as the points lead.

“I just tried to stay consistent because I’m still not in a turbo car and I lack some horsepower on the top end,” said Haagsma. “All the top turbo guys we battled broke down. We have a little points lead now and we’ll try to stay consistent. I may run the non-turbo car for the rest of the year. Cody broke and Beau broke. There were just a lot of cars that went down on the start. Then Piplic broke. He blew a belt, and I knew from there on I had to calm down and go slow.”

STV’s Nic Granlund entered his Yamaha in the Pro race, so he could get some extra practice in for the Pro Stock event. He outlasted and late-braked several other drivers in the corners to net the runner up slot.

BDR’s Larry Heidler was also driving a non-turbo car as well. Like the Haagsma and Granlund, he outlasted the competition and drove it home third, earning his first career WORCS Pro podium finish.

“On the restart, I was second and about halfway through that lap, I got around Cody and drove as hard as I could,” said Heidler. “I was trying to keep up on time. The only time I saw Davy was when I lined up next to him. From there, I never saw him at all.”

In Pro Stock, Beau Baron netted his second victory of the weekend after winning the Pro ATV race. He snagged the holeshot and ran first for the entire race in his Polaris RZR, holding off the similar car of Ray Bulloch. Granlund finished third, recording his second podium of the weekend, ahead of the RZRs of Cody Bradbury and Matthew Hancock.

“These cars are hit and miss all of the time,” said Baron. “I was frustrated in the Pro race. I didn’t make it a lap before my car overheated. The Pro Stock car ran great. It’s bone stock and that’s what I like; it showcases driving skill and not who has the biggest wallet. I pulled the holeshot with the stock car. It’s great to pull off two wins this weekend.”

Maxxis’ Ray Bulloch ran nose to tail with Baron for most of the race. Though he was able to catch Baron, he was unable to make that crucial move for the lead. He credited Baron with running a flawless race.

Nic Granlund ran the same Yamaha he raced in the Pro event. He said he simply hosed it off and raced it.“I was hanging with them for a couple of laps, but I had a get off and lost some momentum there,” said Granlund. “The Yamaha just keeps on pushing. I raced it yesterday and I raced it today. It’s been a good year.”

In the Pro Women’s race Jennifer Broughton scored her first victory of the season. Emily Green and Giuliana Flowers completed the top three. All three were driving Polaris RZRs. Broughton said tuning and testing after the last race made the difference for her.

“The track was super tight and there were only a few lines,” explained Broughton. “Someone tipped over in front of me, I got around her and took off like a scared rabbit. We got some tuning done on it by Curtis Sparks. They got the car running super well and it made a huge difference. This felt good because I’m pretty confident in my driving, so it’s nice to have a good car behind me.”

The WORCS SXS racers next head to the brutal and exciting track in Lake Havasu City, AZ. That race is scheduled for March 17-19.