Taft, CA – Gary Sutherlin won his first race of the season during the Pro Motorcycle portion of the Rocky Mountain WORCS Series presented by Maxxis and Dirt Wheels at Honolulu Hills Raceway. Sutherlin inherited the lead in the final laps when Blayne Thompson, who had led the entire race to that point, retired from the event with a broken wheel. Precision Concept’s Justin Seeds finished second, ahead of his teammate Robby Bell, who charged from last to get the final spot on the podium. Michael Del Fante and Travis Damon rounded out the top five. 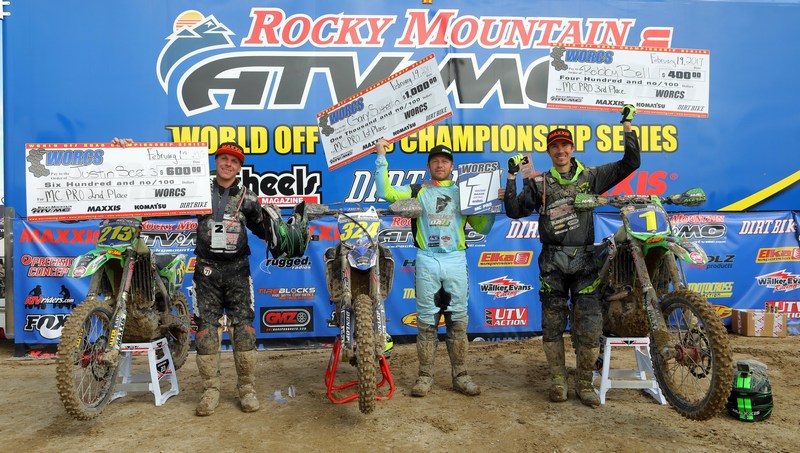 Round three of the WORCS series marked the first time this season that all three of its racing classes—Motorcycle, ATV and SXS—raced on the same weekend. Just prior to the event, the strongest storm in 20 years hit the California coast. The storm, appropriately named Lucifer, dumped heavy rain on the track on Friday. Fortunately, the rain stopped and after some major flooding on Friday, and conditions were near perfect for Sunday’s pro main.

“Our goal is always to have the race, no matter what,” said WORCS owner Sean Reddish. “People drive a long way to come to these races. In 17 racing seasons, we’ve never canceled a race. I’ve never seen a weather forecast that said: ‘Life threatening rain. Do not drive.’ I’m proud of the racers that stayed with it and all of the staff that made it happen. There are so many things that have to be done, and our staff did an excellent job.”

Though track officials did have to reroute the track around some of the motocross section of the circuit, they did open up some of the track late Saturday, allowing the racers to hit the big step up, which is the track highlight jump. They also added a section in the canyons at the back of the track. The hills were covered in green grass due to rain during the winter, allowing the track to live up to its namesake Honolulu Hills.

“The mud really brought everyone together,” said Reddish. “We saw some of the best racing this weekend. To have six pros duking it out to the finish after two hours was phenomenal. They say mud is the great equalizer, but it didn’t just make the slow guy fast, it made everyone fast. It was an awesome weekend.”

Taylor Robert is out indefinitely after sustaining serious internal injuries and broken bones in the King of the Motos race last week. Our thoughts and prayers continue to go out to Robert, who won the first two races of the WORCS season on his factory FMF KTM. Robert returned to WORCS with an eye on competing for the 2017 championship. “Taylor is just a class act all the way through,” said Reddish. “He is probably the greatest racer in the world in off road racing. You never see him coming because he’s just such a humble and great kid. We’re going to miss him for six or seven months, but he’ll come back strong. A slow day for him is a fast day for everybody else.”

Thompson got out front early on his Honda in the two-hour race, and had a great lead going on Sutherlin in second. However, bad luck struck again and Thompson had a wheel come apart during the final laps of the race, taking him out of the lead, and the race, for the second time in as many races. Sutherlin inherited the lead on his Yamaha and went on to win. 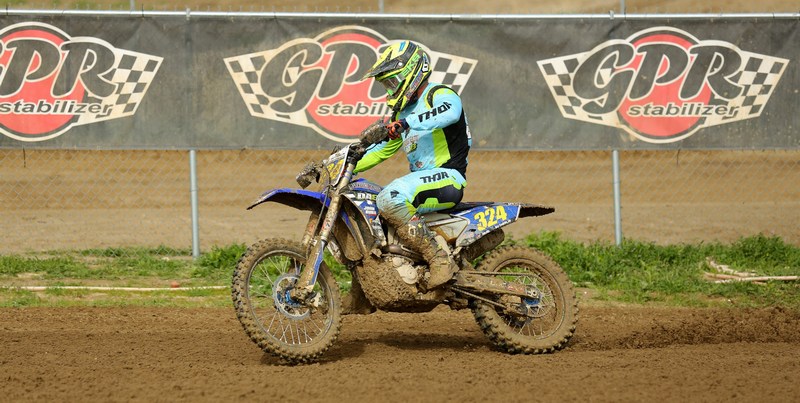 “The track got better as the day went on and Blayne was riding great,” said Sutherlin. “I was just trying to pace off of him and race until the end. Unfortunately, he had problems, but my hat is off to him and to everyone else on the podium. The track got great toward the end. It started out a little soupy, but thanks to Sean and WORCS we were able to put on a great race even with the conditions we had. I was just trying to stay smooth. This is not one of my favorite places, so I just tried to pick good lines and watch as the track developed. I just tried to run consistent laps and not make any big mistakes.” 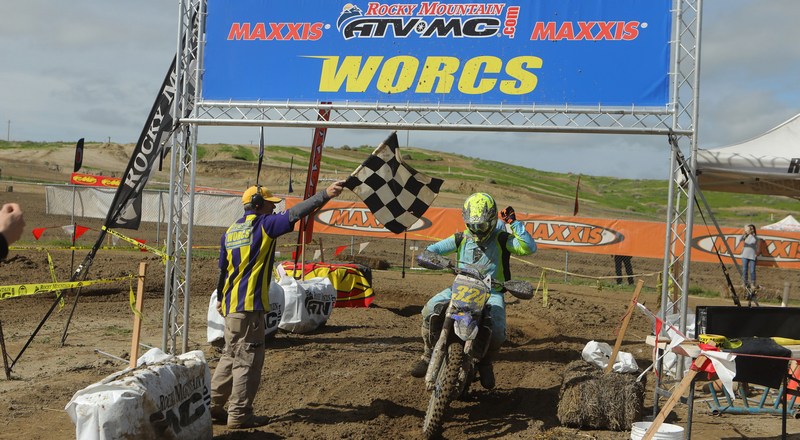 Justin Seeds took the holeshot and led most of the first lap. He ran consistently in second for the rest of the event. He made a charge on Sutherlin at the end and just held off Bell to earn the runner-up slot.

“I’ve never been the kind of guy to send it on the first few laps,” said Seeds. “I had to wait until found my lines and that happened 30 minutes into the race. I kept them close enough and I was able to put a run on them at the end. I wanted to get Gary, and my teammate Robby rode a great race and scared the crap out of me at the end when he came charging behind me.”

Robby Bell, who started last on his Kawasaki, rode through the pack to score the podium, his second this season. After several battles with Damon in one of the track’s mud section, the defending WORCS champion made it up to fifth on the final lap and charged two more positions to snag the final spot on the podium. 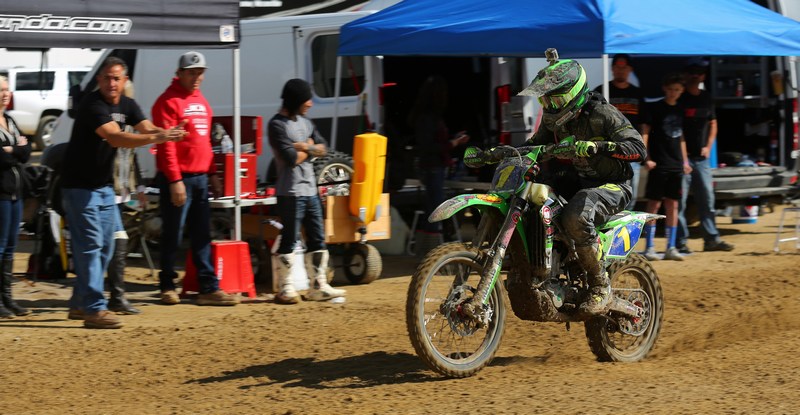 “The WORCS crew did a great job with what they had,” said Bell. “It was a good mix of hard pack and it was fast. They added in the canyons in the back and while they were super slick and sketchy at the beginning, they really came in at the end. I had a couple of close calls with Travis Damon. That was a great battle with him. On the last lap, I went as hard as I could. I’m stoked to get third and see my teammate Justin do well. Everyone was riding really fast today. Hopefully I can build off of this.”

Michael Del Fante continues to run consistent races in search of his first WORCS podium. Del Fante was running third on the final and just couldn’t hold off Bell in the end. 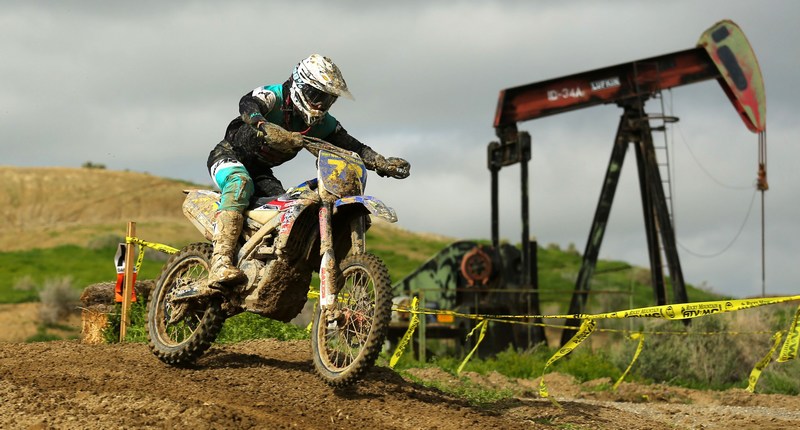 “It was a great race today, but it was really crazy,” said Del Fante. “It was really cool to see everyone so competitive. I was in third on the last lap and I knew Robby was behind me. I struggled in the pro section and he just sent it. I am making steps in the right direction and I was super close to my first WORCS podium. We’ll just move forward from here.”

Travis Damon held off Bell for a number of laps in one of the race’s fiercest battles. Both fought it out, making contact several times, before Bell passed him during his charge to the front. He finished fifth on a Honda. 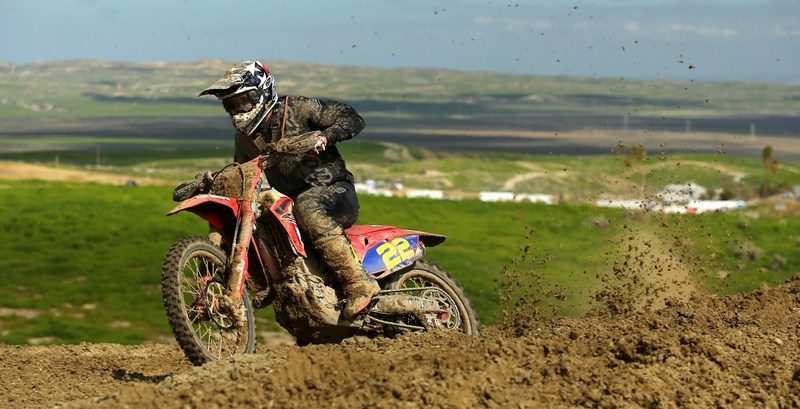 “The track was difficult, but you could still keep good speed through a few of the lines,” said Damon. “I had so much fun battling with Robby out there. We came together in the mud section in the back. For three straight laps we were banging bars back there. Every single lap I had a different battle going on.”

For the second consecutive race, Thompson gave up a lead he held for the entire race on the final lap due to a mechanical problem. Though unhappy with the string of bad luck, he took the DNF in stride.

In Pro 2, Dante Oliveira pulled off his first victory of the season, after charging back from a difficult start. Riding a KTM, Oliveira beat out Logan Chambers, who won the first two races of the season on his KTM, both times just ahead of Oliveira. Alex Dorsey was third on a KTM. 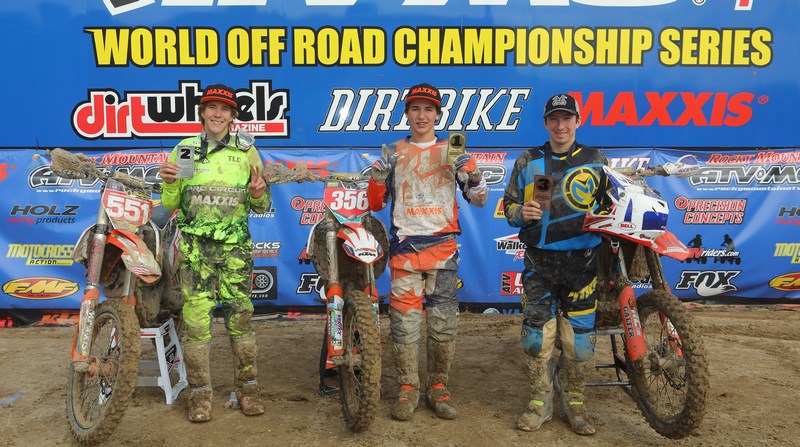 “I didn’t get too good of a start…right when I got over the hill I crashed,” said Oliveira. “I put my head down and I caught Alex Dorsey and Logan Chambers. I passed them when they pitted and I led from there. I like the mud so this was pretty good.” 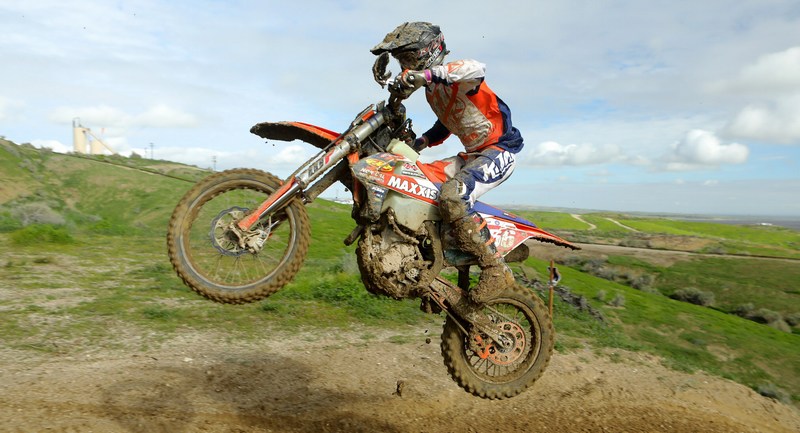 Logan Chambers had led most of the race despite several mishaps. Once Oliveira took the lead, Chambers did everything he could to take back the spot, but fell short.

In Pro 2 Lights, Clayton Hengeveld took a shot at redemption on his Kawasaki and nabbed his first victory of the season. Austin Serpa, who led every lap but the last one, was second, ahead of Cooper Abbott on a Yamaha. Hengeveld finished third in the first race and second in round two. 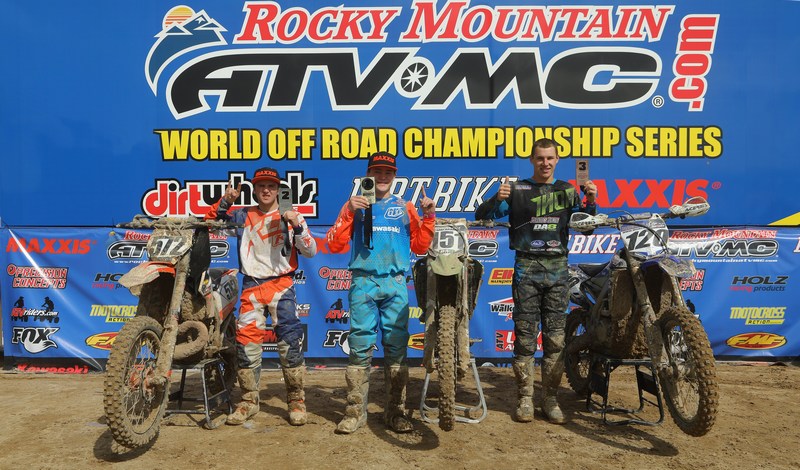 “I just charged hard, put my head down and on the last lap, I passed Serpa in the pro pits and went on to win,” said Hengeveld. “It’s really a big redemption. I’ve led a bunch this season, and I finally put it together here at Taft.” 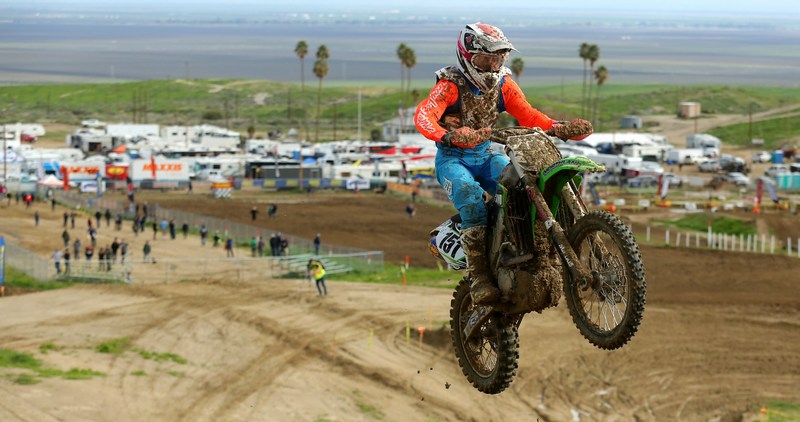 Austin Serpa took the lead at the start and appeared well on his way to second consecutive victory. Though he made a charge on the final lap, Hengeveld held him off and he finished second.

The next race for WORCS off road series is the motorcycle-only event in Lake Havasu City, AZ. That race is scheduled for March 10-12th.