With beautiful weather all weekend and just enough moisture in the track to keep the dust down, the racers were ready to take on Primm’s notoriously fast and rough course. The course was lengthened by over two miles for the pro race with a rocky section added that still had some water puddles left over from the rain the previous week, which added to the challenge for the competitors.

DWT’s Robbie Mitchell grabbed the holeshot on the dead engine start and took the lead with Sloan and Baron in tow. Baron pitted early and was quickly back on Mitchell’s tail. Mitchell, who didn’t pit, couldn’t hold off Baron’s charge on the final lap, and Baron took the lead and went on to win the race. Mitchell subsequently ran out of fuel on the final lap and then was penalized one lap for an illegal refueling procedure.

“I ended up pitting earlier than everyone else and that worked to my benefit,” said Baron. “I got to have some clear track and caught back up. I ended up passing Robbie, I looked over and his bike was sputtering. All of the sudden, he was out of gas.”

STI’s Mike Sloan passed Mitchell on the final lap to finish second. Sloan finished third in the season opener and ran consistently to net the runner-up slot. Sloan also thanked Collins Webster for push starting his ATV when his battery failed. Webster, after running fourth for most of the race despite suffering from the flu, lost his chain early in the race, ending his race. 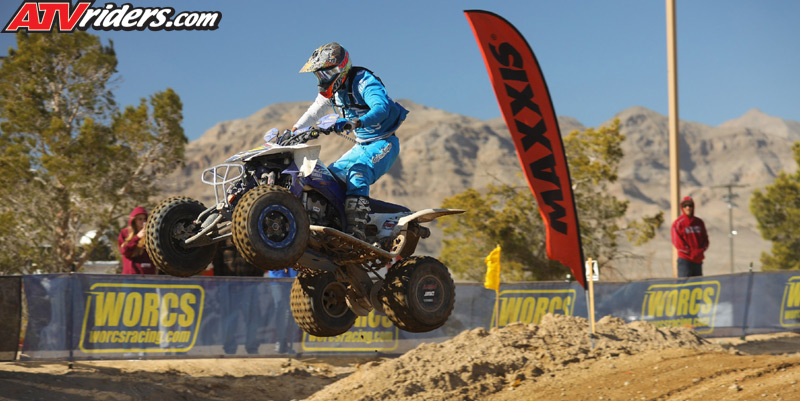 Tyler Benally’s victory in the Pro-Am class, as well as Mitchell’s penalty, moved Benally to third overall. WORCS scores on an overall finish, and this marked the first time in series history that a Pro-Am racer scored an overall podium. Benally definitely had to work for it. On the final lap, the head pipe on his Honda fell off and he still managed to pass Logan Huff to take the final spot on the podium just a few turns before the finish.

Rookie Pro ATV racer Jerry Maldonado finished third in the Pro Class. The 17-year-old racer returned to WORCS racing after taking a break after winning two Youth championships.  “This just show how important that first lap is,” said Maldonado. “You have to hold it wide until you get comfortable with the track. I forgot how rough these tracks can get. This is my last year before I go to college, so I’m going to go for it.”

Mitchell rightfully dominated most of the race and looked well on his way to victory. That is, until the final lap when he ran out of gas while battling with Baron for the win, and he was penalized for carry gas to his machine, which dropped him back to a fifth place finish.

In Pro Am, Logan Huff finished second, which sported new graphics from SSI Decals. Huff had a tire deflate on the final lap, but his second-place effort allows him to maintain the Pro Am points lead.

Bryce Peart returned to WORCS competition after running his last full season in 2013. He rode his Honda to a third-place finish in Pro Am in his first race this season. He passed Ty Sanders on the second-to-last lap to score the podium.

The next race for the WORCS ATVs is scheduled for February 17-19 at Honolulu Hills Raceway in Taft, CA.