Primm, NV– Rain soaked, mud covered and cold, Cody Bradbury toughed it out to finish first overall in the Pro Production portion of the SXS World Finals held at Buffalo Bill’s Resort and Casino. The special doubleheader SXS-only event was round one and two of the Rocky Mountain WORCS Series presented by Maxxis and Dirt Wheels. Bradbury, driving a 2017 Polaris RZR XP Turbo, beat out defending WORCS Pro Production Champion David Haagsma, who was second overall, ahead of Ryan Piplic, Larry Heidler and Keith Johnson. 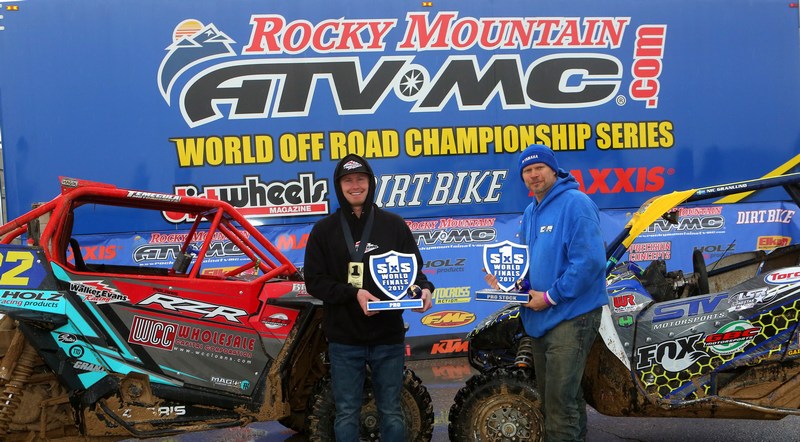 The first-ever SXS-only event for WORCS was held on two days on two different race courses. Saturday’s race was held on the Lucas Oil style short course, while Sunday’s event was held on WORCS standard off-road desert track. The two finishes were combined similar to a two-moto format, as well as fastest time, to determine the $2,500 overall winner between the Pro Stock and Pro Production classes.

Weather played a huge role in the outcome. Friday’s qualifying was rained out, forcing organizers to set starting position by draw for the short course race. That race was held under beautiful clear skies with temperatures in the mid-50s. Conditions changed significantly Sunday with heavy rain moving in before sunrise, turning the race into a battle through the mud, water and frigid temperatures.

Cody Bradbury overcame the weather, the track and the competition to score the overall victory, earn $2,500 and get the bragging rights of the overall champion. Bradbury just lost out to Piplic in the short course race to finish second. In Sunday’s race, he took the lead from Piplic on the first lap and never looked back. Bradbury joined Polaris’ factory team this year.

In the short course race, Bradbury piloted his brand new Polaris into the lead just before a competition caution. Piplic outgunned him on the restart and took the lead, handing him second in that race.

David Haagsma was running a non-turbo Polaris RZR in the race. After drawing a number one starting spot for the short course race, Baron held on for a third-place finish. He finished second in Sunday’s race. Though he had a consistent weekend, Haagsma’s naturally aspirated car was really no match for the turbos, a problem he plans to rectify before the next round.

Ryan Piplic finished third in Pro Production, but he had to work for it. He drew a second-to-last starting position for the short course race and drove through the field to finish first. In Sunday’s race, he was battling for the lead when drive belt problems moved him back to seventh at the finish. Though he had planned only to run Pro Stock this year, he put together a turbo car for this event.

In Pro Stock, Granlund carried the day in his Yamaha. After a 13th-place start in the short course race, Granlund immediately started moving through the field and finished second. He repeated the runner-up effort in Sunday’s race after battling with Doug Eichner and Bulloch on the muddy course. That battle took Bulloch out of the lead and put Granlund on top of the box.

“WORCS did a great job setting up this event,” said Granlund. “The Yamaha was really ripping this weekend. I just set a good pace and tried not to make a mistake or crash.”

Ray Bulloch and his Polaris simply outclassed the field in the short course race. After taking the lead on the first lap, he was never seriously challenged. In Sunday’s race, Bulloch was in the lead in the outside of a turn when he tangled with both Granlund and Eichner. The contact sent him off course into a chunk of concrete, ripping an A-arm out of his RZR’s frame. He recovered to finish sixth in the race and second overall.

Beau Baron put on an amazing show in the short course race. After drawing a 30th starting position, he diced his way through the field to finish eighth. He used the resulting starting position to win Sunday’s race on adjusted time and record a third-place overall finish. Baron was driving a Holz-built Polaris with bone stock engine and clutches.

Shelby Anderson finished fourth overall in her Pro Stock debut after stepping up from SXS 1000 Stock. She started 20th in the short course race and drove through the field to finish fourth. In Sunday’s event she recorded another fourth, placing her fourth overall.

In SXS 1000 Stock, Gareth Dihel recorded his first WORCS victory. Driving a Pro Motorsports Polaris, he was second in the short course race and won on Sunday to record the overall victory. David Johnson was second, ahead of 13-year-old Branden Sorensen.

In the Women’s Class, Amanda Sorensen picked up where she left off last season and won both races to finish first overall. Emily Green went 2-2 to finish second, ahead of Jennifer Broughton, who nearly picked off Green in Sunday’s race, but settled for third at the finish.

The WORCS SXS classes will be back in action February 17-19 when the series heads to Honolulu Hills Raceway in Taft, CA. WORCS ATV and motorcycle classes will race next in Primm, NV January 27-29.