Dalton Shirey Makes it Two in a Row at Mesquite MX

Posted on May 8, 2016 by Podium Promotions Leave a comment 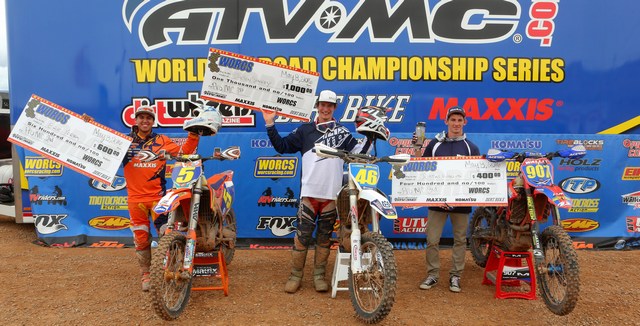 With uncharacteristic overcast conditions and cooler than average temperatures in the 70’s, the weekend was perfect for racing. The track featured a challenging motocross course with several big table tops and step-ups. The off-road section was mostly wash with lots of silt and rocks. This played havoc with the motorcycle competitors who had to deal with the fast and technical racing surface, which challenged the top pros to keep their motorcycles up right for the entire 14 lap race for the two hour race.


Precision Racing’s Robby Bell started second behind Yorba, who won edged out Bell for the holeshot. Yorba crashed on the second lap, handing the lead to Bell, who began to check out. However, on lap 10, Bell retired when a broken hose caused his Kawasaki to overheat. Yorba regained the lead, but crashed into a bush with Udall crashing right behind him. Shirey took the lead from there and went on to claim yet another pro win.

Shirey, in his rookie season, is just as surprised as anyone else at how well he’s doing this year. Along with the two wins, he also finished second in Round 2. That consistency has placed him close to the points lead with just three races left this season.

“I keep surprising myself every round,” said Shirey. “When I got the lead, I just tried to ride clean and not do anything stupid. I was so tired at the end of this race! I got a good start, but I fell. From there, I just tried to set a good pace and hit my lines every lap. I slowly grabbed spots one by one on each lap. The sand and the whoops did me big favors today.”

A series of crashes slowed Yorba during the event. He recovered from the crash with Udall to net the runner-up finish. It marked his first podium of the season. “I got a great start, grabbed the holeshot, and led for a bit,” said Yorba. “I just stuffed the front end in one of the sand turns and fell back. I got really bad arm pump after that and I just kind of cruised around waiting for it to go away. I got back into a groove and made a few passes with my pit strategy, but I ended up getting stuck in a bush with Udall. Dalton got past me. Had I not gone down, the battle between Dalton and I might have been different. It’s been a long time coming. I’m happy to finally get a podium this year.”

Wallis was happy just to get a finish, not to mention a third place. It marked his second podium of the season after winning the Lake Havasu round. “It was really sketchy out there,” said Wallis. “There were a lot of points where I thought I was going to hit the ground, and I just barely rode out of it. I wrecked twice. It’s a relief to get back on the box, especially after my Havasu win. I was hoping to be up on the box in Sand Hollow, but I had some bad luck and I wrecked. This is a little weight off of my shoulders.”

Colton Udall had an equally difficult race and just ran out of steam in the end. “I was pacing myself because I knew it was going to be really tough,” said Udall. “Dalton almost landed on me. Then he crashed and Yorba crashed. So I got up to second. Robby was checking out, and I didn’t have his pace. I kept thinking I was going to get rid of my arm pump, but I never really had the energy I needed to win. I ended up going through the bushes with Yorba and Dalton went past us like ‘Thank you very much.’ I should have slowed down and been more patient. That crash really took it out of me.”

Bell recovered to finish 10th and just barely holds onto the points lead going into the final three races. “To do that well, then have something go wrong and take me out was really tough to take,” said Bell. “I finally got a good start; I’d been waiting all season for that start. I got into the lead and Dalton was right on me. After the pit stop, I felt like I was going to be even more consistent. Then I felt my bike slow down. Out in the sand, the heat temp sensor killed the bike. It split a hose, all the coolant leaked out and it overheated. Luckily I was still scored with a finish. The points are not as comfortable as they were, but getting a finish consoled me a little bit.”

In Pro 2, Travis Damon extended his points lead with his second consecutive and third victory of the season. Alex Dorsey was second, ahead of early leader Logan Chambers.

“I’m pretty pumped about this,” said Damon. “I didn’t get that great of a start. I finally got around a guy I was following. Then Logan had some trouble with his bike and he pitted. I got around him and just rode from there. I’m hungry for that championship.”

Dorsey said he is getting used to running in the sand. He notched his second consecutive podium. “I’ve never been much a sand rider until this year with WORCS and I’m getting pretty good at it,” said Dorsey. “I was 11th going into the second lap, but I just put my head down and charged. I’ve had a couple off races, so it feels pretty good to be up here two races in a row.”

Chambers earned the holeshot and was leading when an errant gas cap and front suspension problems slowed his charge. His fourth podium finish this year, including two wins, has him second in points just three back from Damon. “I started with the holeshot, got myself up a good lead, I made a couple of mistakes, and then my gas cap lodged into my steering stabilizer and locked my bars,” said Chambers. “I had no clue what was going on so I pitted and Travis passed me. From there I tried to pace myself, but something happened to my forks, so I’m happy to walk away with the podium after the trouble I had.”

“I got the holeshot and just stayed out front,” explained Oliveira. “I only crashed once, so that felt good. I felt good on the bike and I could push really hard today. I’ve struggled with crashing for the past several years, but I’ve been able to keep it on two wheels this year.”

Hengeveld shook off an arm pump and was eyeing catching Oliveira this round. He came up just short. “I came close to catching Dante at Sand Hollow, so I thought I could catch him today,” said Hengeveld. “During the qualifier, I suffered an arm pump, so I wanted to run consistent today. I spun a little at the gate, made my way to second and just tried to catch him. My hat is off to Dante; he was flying today.”

WORCS Racing next heads next to Iron Mine Race Park in Cedar City, UT May 27-29 for Round 8 of the Rocky Mountain MC World Off-Road Championship Series presented by Maxxis and Dirt Bike with a full slate of motorcycle, ATV and SXS racing.