Posted on March 27, 2016 by Podium Promotions Leave a comment 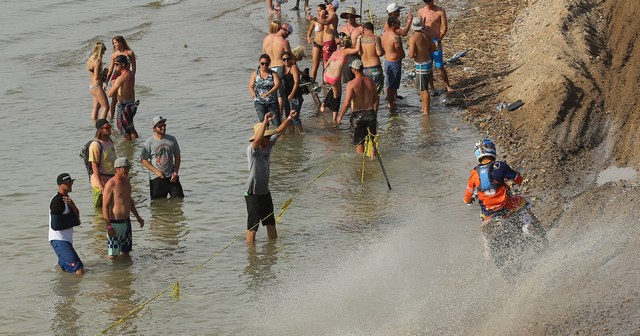 For the Easter weekend racing event, the Zip Ty Racing sponsored WORCS Kids held a special Easter egg hunt on Saturday evening with approximately 50 kids participating with some nice prizes up for grabs with many of the top pros donating signed jerseys and Focus Apparel giving away free t-shirts in exchange for golden eggs, and there plenty of candy to go around for all the kids.   Zip Ty Racing is also supplying the zip ties for securing all of the transponders used in WORCS competition for 2016.

After a brutal and windy Saturday with wind gusts up to 40 mph, the winds calmed down for race day Sunday. The racers left the line a 2:15 p.m. for a two-hour race. With temperatures in the mid-80s, the beaches were full of spectators, but the track definitely deteriorated during the course of the day.

Gary Sutherlin returned to WORCS competition this weekend after missing the first three rounds of the season due to an off-season injury. After grabbing the holeshot from the far outside, he held the lead for one lap, before surrendering the lead to Bell who held the lead for most of race before suffering from dehydration and dropping back, which allowed Justin Wallis to capitalize on the opportunity and take over the lead and hold it to the checkered flag for the win.

“I practice in the sand a lot, so I just tried to stay consistent and put down some good lap times,” said Wallis. “I tried to stick to my lines and charge. Toward the end, I was so drained, I pushed to get there. I’ve been working my butt of to get here. My Beta was running great today. This is huge. I remember coming to this race four years ago as a spectator. Just to be here is a dream come true. It’s surreal right now.”

Justin Jones passed Travis Coy on the final lap to net the runner-up honors. Jones also overcame being struck in the face by a rock early in the event, but he held on to match season best second place finish, which boosted Jones to fourth place in the points championship just one point behind Justin Seeds.

Coy’s first podium of the year came as a result of hard work at the end of the race. He, like most of the field, was physically spent as the event took the checkered flag to claim the final spot on the podium, which was a season first for Coy.

Robby Bell, still suffering from the after effects of the flu, struggled after the middle stages of the race after becoming dehydrated and experiencing leg cramping, which slowed down his charge as he dropped out of the lead back to a fourth place finish to maintain the points lead.

Gary Sutherlin was just happy to be back to racing after missing the first three rounds of the season due to a preseason injury, and after grabbing the holeshot, he held on to claim a top five finish in 2016 WORCS debut.

In Pro 2 class, motocross regulars Carlen Gardner and Josh Mosiman made their first WORCS starts pay off as they finished one-two. Cody Schafer was third. Points leader Logan Chambers led most of the race, before crashing in the closing stages. Gardner took the lead from there and went on to win in his WORCS debut.

“We’re hitting a few WORCS this year to do some training,” said Gardner. “We came out and had some fun. Logan was really holding it down for most of the race. Unfortunately, he went down. I just tried to stay consistent.”

In Pro 2 Lites, RPM/KTM’s Dante Oliveria won his fourth consecutive race. Austin Serpa and Clayton Hengeveld rounded out the podium. Oliveria nabbed the holeshot and was never seriously challenged. He has tire sponsor Maxxis truly to thank for his victory because his race was nearly over before it started.

“Maxxis saved the day,” said Oliveria. “I noticed I had a tire moose issue while going to the starting line and they took my tire off and changed it. They really looked out for me.”

The Rocky Mountain MC World Off-Road Championship Series presented by Maxxis and Dirt Bike will be back in action April 15-17 for round five of the series, which heads to Sand Hollow in Utah.