Posted on March 20, 2016 by Podium Promotions Leave a comment 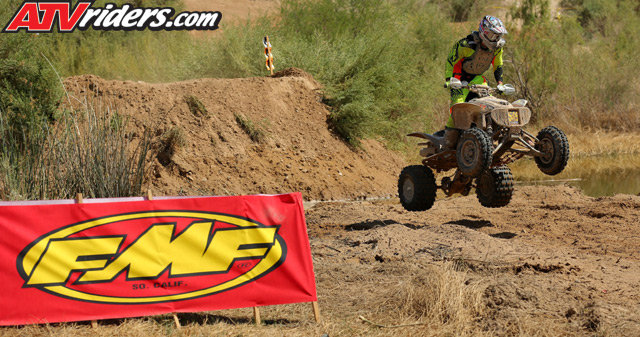 Lake Havasu City, AZ – Beau Baron remained unstoppable as he charged to his fourth consecutive WORCS ATV Pro victory at Crazy Horse Campground. Baron came out atop a battle with Robbie Mitchell, who finished second, with Mike Sloan in third. Garrin Fuller and Collins Webster rounded out the top five at the fourth round of the 2016 Rocky Mountain MC World Off-Road Championship Series presented by Maxxis and Dirt Wheels.

LMR Racing’s Robbie Mitchell continued his dominance of the dead engine starts this season by ripping off a holeshot and taking the immediate lead. Meanwhile, Baron was slowly moving through the field and was just behind Mitchell when a rare mistake sent Mitchell over a berm. Baron took the lead from there and drove to victory.

CST’s Beau Baron was not aware he had taken the lead until he pitted on the next lap. “I just tried to keep up with Robbie, and keep a pace I could run most of the race,” said Baron. “I was just chasing him around. All of the sudden, I couldn’t see him, and I thought he had really pinned it. So I picked up my pace, but then I saw Robbie behind me. Man, I was happy to be ahead of him. My hat is off to him. I give it everything I have to beat him and it’s all I have. He’s definitely a competitor.”

“It’s really great for me to get another win,” added Baron. “This is what I love to do. It’s nice to see some more Pros coming back. That front gate is really starting to get filled.”

DWT’s Robbie Mitchell said a minor mistake in his suspension set up led to his off-course excursion.  “Like I say every time, the Lindsay Machine motor always fires right up and gets me off the line,” said Mitchell. “I messed up my suspension settings. I was off a few clicks off on the rebound settings and bounced the front end over the berm. It took me awhile to get back over. I wanted to win to close up the points a little bit, but we’ll get him at the next one.”

Duncan Racing’s Mike Sloan celebrated his third-place finish after becoming a new father. His new daughter, named Seeley Sloan, has kept him busy changing diapers leading up the race. “I’ve been sitting on the couch a lot and changing a lot of diapers,” explained Sloan. “I’ve been trying to fit everything into this crazy life. It felt good to just get off the couch, ride my quad and clear my head.”

Duncan Racing’s Garrin Fuller was charging at the beginning stages of the race, but his pace slowed toward the closing laps. “I was really pushing hard for the first four laps and if I had tried to keep that pace I wouldn’t have had anything left for the end,” said Fuller. “I tried to back off and hoped they would fade at the end. I was catching Sloan at the end of the race, but I couldn’t push any harder to catch him. I’m happy with fourth, especially the way my season has been going; baby steps, I guess.”

DWT’s Collins Webster said he had a rare off weekend. Webster ran in the top five all race until finishing fifth. “This was really an off weekend for me,” said Webster. “It’s not normal for me to run like this in the rough stuff. I usually enjoy it, but it just didn’t happen this weekend. The bike was great this weekend. I just had an off race. We got a finish and we got some points. We have a few rounds left so we’re not at a total loss.”

In Pro Am, Brian Sirevaag came out atop a battle with Justin Waters to score his second-career Pro-Am victory. Waters finished second, ahead of Logan Huff.

Sirevaag dominated from the start after quickly passing into the lead, and held the lead for all but one lap when he had trouble in the pits and Waters took the over the front spot. However, Sirevaag had the ride to beat. He passed Waters on the next lap and drove to victory. “I took the lead at the start and never really looked back,” said Sirevaag. “I overflowed my gas tank in the pits, and had to retake the spot from Justin Waters. It killed my engine and we had to get it restarted. I lost my tear offs, but thankfully I was up front and didn’t get into too much mud. I just knew I had what it took, came in here and I won.”

Justin Waters had trouble with the dead engine start, but rebounded to finish second. “We didn’t get off to a great start,” explained Waters. “We pushed through the pack pretty quickly. We got up to second behind Brian and then got up front for a little bit when he had issues. I tried to keep pushing, but Brian had a little more energy than me this weekend so we cruised home to second.”

Logan Huff had even more difficulties at the start. After having to restart his computer several times, he had to be pushed to get his ride started. He drove through the field to finish third. “I just went for it from there,” said Huff. “I put on a good charge after that. I made sure to hit every line. I’m very excited and I’m definitely looking forward to doing it more often this year.”

WORCS heads to the dunes of Sand Hollow State Park for the next round, scheduled for April 15-17 in Hurricane, Utah.