Posted on February 28, 2016 by Podium Promotions Leave a comment 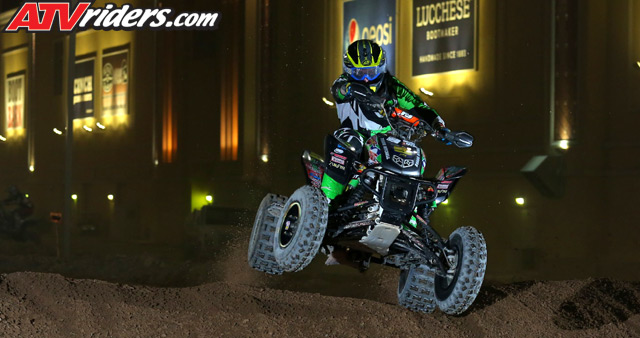 Las Vegas, NV – History shows that perfection is impossible. Beau Baron, however, is doing his best to change that sentiment as he won his third consecutive WORCS Pro ATV Race at the South Point Casino for round three of the 2016 Rocky Mountain MC World Off-Road Championship Series presented by Maxxis and Dirt Wheels. Baron came out atop an intense battle with Robbie Mitchell to the secure the win. Mitchell was second, ahead of Mike Sloan, Dillon Zimmerman and Garrin Fuller.

The race venue was unique for WORCS. It was held in the three horse arenas around the hotel and casino, as well as the outside grounds. The short course comprised three different types of dirt, including a sand section, as well as an enduro-cross section in the main arena with big jumps, tires and logs. Race times were short for WORCS competition at just 45 minutes. A capacity crowd was on-hand to watch the Saturday night race.

Baron won the race, but had a battle getting it. Mitchell got a tremendous jump at the start with Fuller second. Baron came out mid-pack at the start. On lap two, he took second and charged behind Mitchell. They came together in the main arena, and Mitchell was able to maintain the lead, but Baron wasn’t about to give up and made the pass stick on the next lap and then held the lead until the end. He won by just over two seconds.

Mitchell is quickly etching his name into WORCS history as the king of dead engine starts. However, traffic held him just enough to open the door for Baron. Though happy with the podium finish, Mitchell wanted the victory.

Sloan admitted he misjudged the setup and battled his machine for the entire race before finishing third. “I was riding a little bit too tight and the bike was loose,” said Sloan. “had to fight through it, find all of the good lines and settle in. Toward the end of the race, we finally started catching up. I got bumped really bad at the start, but I caught back up.”

Zimmerman came out of semi-retirement to finish fourth here. The Las Vegas native was driving a Goldspeed-equipped Can-Am.

After running second for most of the race, Fuller cased a jump and dislocated his shoulder that has been nagging him since last year. He finished fifth.

Ryan Waldo won the Pro Am race ahead of Justin Waters, who recovered from a hard crash early in the day that required him to get stitches inside his mouth to finish second. Cody Mitchell was third.

The next round of the Rocky Mountain MC World Off-Road Championship Series presented by Maxxis and Dirt Wheels for ATV racers head to Lake Havasu, AZ for a doubleheader weekend March 18-20.