Posted on January 31, 2016 by Podium Promotions Leave a comment 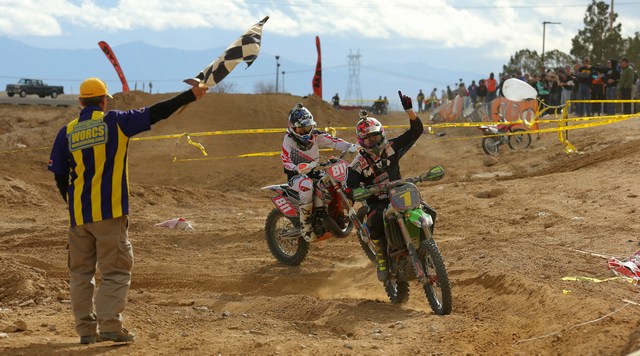 Primm, NV – Precision Concept’s Robby Bell survived a rough and challenging race to earn his second consecutive victory in Pro class at round two of the Rocky Mountain MC World Off-Road Championship Series presented by Maxxis and Dirt Bike.  Dalton Shirey finished in the second spot ahead of Colton Udall to round out the WORCS Pro podium.

Known for its rough and technical nature, the Primm course was shortened this year making the track much more challenging as racers took on the ruts and sand whoops.

It was definitely a test of survival as Blayne Thompson took the early lead after Justin Seeds nabbed the holeshot. However, the rough course took its toll on both Seeds and Thompson, handing the lead to Bell, who started seventh. Then Bell had to contend with a charging Justin Jones, but Jones crashed hard on the truck track near the halfway point of the race, which ended his charge.  Shirey attempted to reel in Bell, but wasn’t able to close the gap and backed it down in the final laps allowing Bell to take a dominate win.

Shirey overcame a mechanical issue while challenging Thompson for the lead and then charged forward to challenge Bell late in the race. In the end, he finished second, marking his best WORCS Pro finish.

Eric Yorba appeared to have the third spot wrapped up with nearly a 30 second lead over Udall on the white flag lap, but he ran out of gas, which dropped him off the podium and back to a sixth place finish, which opened the door for Udall.

Udall suffered serious arm pumps early in the race and came from the back to get the last spot on the podium. It marked his second podium in WORCS competition and his first since 2012.

Justin Wallis finished right behind Udall in the fourth spot, and Michael Del Fante rounded out the pro top five.

In Pro 2, Travis Damon won, ahead of Logan Chambers and Alex Dorsey. Chambers took the holeshot, but Damon quickly took the lead and cruised to victory. It marked Damon’s second straight podium finish.

“I didn’t get too great of a start, so I had to set a great pace,” said Damon. “I had trouble getting my pace back after I pitted, but I kept a straight and kept going for it. The course was gnarly, but there were good lines and it smoothed out through the weekend.”

“I got the holeshot and stayed out front the whole time,” said Oliveira. “The course was brutal. The wind really picked up at the end and it was scary on the Trophy Truck track over those rollers.”

Round 3 of the Rocky Mountain MC World Off-Road Championship Series presented by Maxxis and Dirt Bike is heading to South Point Casino on February 26-28 in Las Vegas, NV for a special format WORCS racing event.