Posted on January 10, 2016 by Podium Promotions Leave a comment 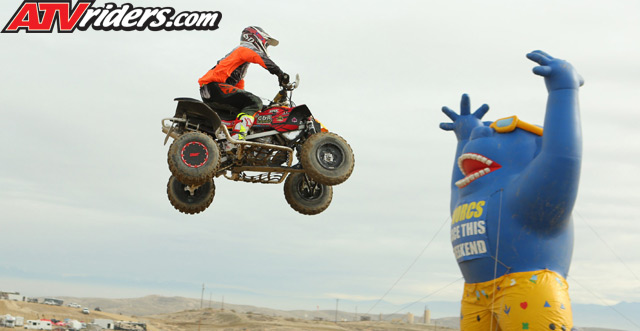 Taft, CA – Beau Baron capped of a perfect weekend of WORCS racing winning the Pro ATV race in the series opener at Honolulu Hills Raceway. Baron, who had previously won both Pro and Pro Unlimited Side by Side races, held off former teammate and 2015 champion David Haagsma to take the win at the opening round of the 2016 Rocky Mountain ATV WORCS presented by Maxxis and Dirt Wheels series.

With rain leading into the event, as well as overcast skies and temperatures in the 50s, the track was primed for a great event. Located in California’s oil fields, the track features a lot of natural terrain as well as the big sky jump that launches racers 120 feet through the air.

Haagsma used all of his motocross experience to take the holeshot at the gate drop on the concrete pad starting line with Baron in tow. Baron took the lead while Haagsma pitted and never looked back.

Haagsma dialed back after losing the lead to Beau Baron during the pit stop, and held second to the finish. Robbie Mitchell was third, followed by Collins Webster, who is back on a Can-Am for 2016. Garrin Fuller overcame a freak sidewall puncture to finish fifth, ahead of Matthew Hancock in his Pro rookie debut.

“Knowing I can actually do it is just phenomenal,” said Baron. “I was in second behind David, then we started going through these silt beds and I was getting arm pumped. So I calmed down, put my head down and started picking up the pace. I had a little quicker pit, came out first and tried to pull the best gap I could.

Haagsma, who is running a limited WORCS schedule while he runs motocross out east this season, said Baron was the better racer on this day.

“I got a great start,” said Haagsma. “I led the first half of the race, and Beau was behind me making up ground. I tried to make a charge, but he flat out rode me today. I’ve never had really good luck here, so to start out with a second is a good here. I still like coming out and battling with Beau.”

Mitchell battled brake fade issues during the race, as well as a fuel tank breather failure that forced him to pit on the final lap and finished third.

“I knew I was ready, but I wasn’t sure about the bike,” said Mitchell. “I think I had something for Davie and Beau, but I wasn’t really able to address the brakes in the off season. Then the gas tank started spraying fuel everywhere so I had to pit. We’ll take the podium.”

Webster started fifth and held on to finish fourth in his first race back on a Can-Am.

“We put on a good charge for fourth,” said Webster. “I’ve always liked the Can-Am. We found a few more horsepower and I’ve lost a few pounds, so it’s good. I like this place, but it beats me up pretty well.”

Fuller was in full-on charge in the top five when a sidewall puncture sent him to the pits for a tire change. He recovered to record the top five.

“I was really keeping pace, but on the fourth lap I started getting a flat. It was a sidewall gash,” said Fuller. “It was a freak thing and we really lost time changing the tire. I’ve had a lot of seat time going into the season, and I feel great. There is no reason I shouldn’t be on the podium at every race.”

Matt Hancock and Mike Sloan both moved up to the Pro Class this season. Hancock finished sixth, just ahead of Sloan.

“I felt like I needed to move up this year and I had to start somewhere,” said Hancock. “I hadn’t had as much time on the bike as I would have liked to, but I’m happy with my finish and I’m looking forward to the rest of the season.”

Justin Waters claimed his first Pro Am win since 2007. He finished ahead of Kyle Grosse and Travis Haynes on the podium.

The 2016 Rocky Mountain MC World Off-Road Championship Series presented by Maxxis and Dirt Wheels season opener provided some intense racing action, and the next round of racing is just three weeks away on January 29-31st at Buffalo Bill’s Casino in Primm, NV for round two.