Posted on October 18, 2015 by Podium Promotions Leave a comment 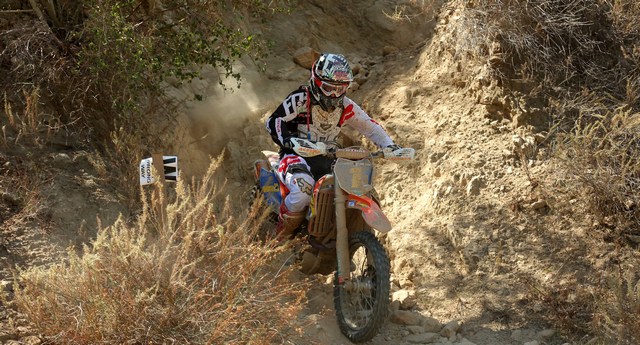 WORCS racer were greeted to near record heat in the triple digits at Glen Helen this weekend in California, but despite the brutal conditions, dust was never issue as the WORCS crew kept several water trucks going non-stop throughout the weekend, which made for a great track.  There was three pro sections added for the main event with a single track down the backside of Yamaha hill, a drop off in front of the Glen Helen sign along with a firewood pit, which played havoc on the racers each lap.


Gary Sutherlin jumped out to the early lead in lap one.  Once out front, Sutherlin never looked back and quickly began building on his lead, which he extended to nearly a minute at the checkered flag to secure his second win of the season.

Robby Bell overcame a serious crash at Glen Helen this summer to wrap-up the 2015 WORCS championship with a second place finish.  Both Bell and Sutherlin suffered injuries this year, but Bell didn’t miss any rounds, and his consistent finishes allowed him to wrap-up his second Pro WORCS championship one round early.

After a serious wreck at the BAJA 500 several months ago, Justin Jones made an impressive return to WORCS racing by claiming the final spot on the podium after running in the second spot for most of the race.

RPM / KTM’s Travis Coy finished in the fourth spot after his teammate, Eric Yorba, had issues in the final lap, which sent him to the pits, and Jeffrey Loop rounded out the top five after grabbing the holeshot.

In the Pro 2 class, Dalton Shirey wrapped up the championship with his sixth win of the season.  Benny Breck claimed the second spot on the podium followed by Travis Damon.

“We’ve been having bike issues, so Ty Davis allowed me to race his bike today, which was really cool of him.  I already wrapped up the National Hare and Hound Championship, so it is great to also wrap up the WORCS championship as well,” said Shirey on the Pro 2 Championship.

Jeremy Newton dominated the Pro 2 Lites class for his first win of the season. Logan Chambers finished in the second spot, and class points leader, Mitch Anderson, rounded out the podium.

The season finale of the 2015 Rocky Mountain MC World Off-Road Championship Series presented by Maxxis and Dirt Bike heads back to Primm, NV for round eight on October 16-18th.