Posted on September 27, 2015 by Podium Promotions Leave a comment 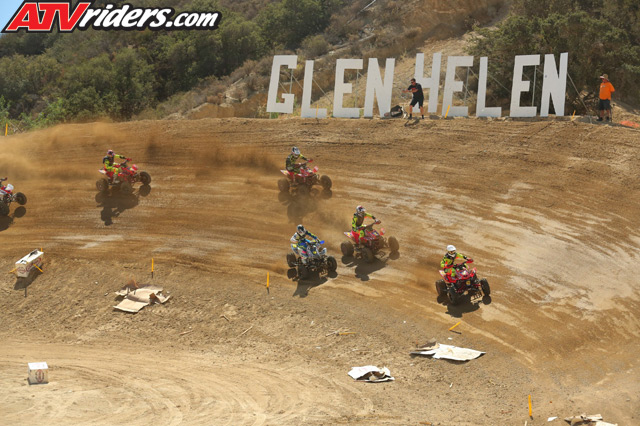 The Indian summer weather continued with temperatures approaching 100 degrees at race start. The unique course, which comprised both of Glen Helen’s motocross tracks, the off-road truck section, as well as some low-lying brush sections, was typical Glen Helen with lots of elevation change adding to the excitement.


Haagsma grabbed the holeshot, but Baron made quick work in taking the lead to net the victory, his first in WORCS since February and his serious injury suffered at Lake Havasu.

Haagsma challenged Baron early in the race, but a slow pit stop relegated him to the second spot on the podium. Haagsma has yet to finish out of the top two this season and has five victories and four additional podium finishes. He merely needs to finish on the podium in the next race to clinch the title.

Mitchell was pleased with his sixth podium of the season. He attempted to challenge to Haagsma and Baron early in the event, but fell back into his own pace in the middle stages and finished third.

Garrin Fuller was challenging Mitchell for third early in the race, but he was struck in the jaw by a rock and pulled off, which allowed Collins Webster to take over the fourth spot.

In the Pro-am race, David Flores spoiled Mike Sloan’s perfect run this season, netting his first victory of the season. Sloan took the early lead looking for his eighth consecutive win, but the rear brakes failed on his machine, giving the lead and eventual victory to Flores. Flores had his own issues when his quad stalled in the pits early in the race, but he charged through the pack to claim the win.

Mike sloan held on to claim the second spot on the podium followed by Matt Hancock.

The season finale for the Rocky Mountain MC WORCS presented by Maxxis and Dirt Wheels series is scheduled for October 16-18 in Primm, NV.