Posted on August 2, 2015 by Podium Promotions Leave a comment 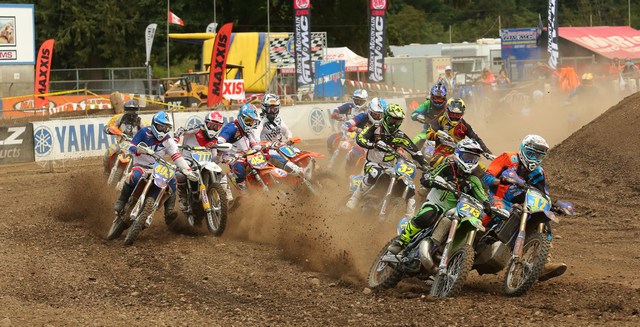 After just over a two month long Summer break from racing, the racers headed to the Pacific North West for the seventh round of the WORCS season, which is typically a cool and damp race location, but that wasn’t the case this year with record heat and dry conditions, which made for an unusual dusty race through the trees, and record heat was on tap with temps in the 90’s.

Besides the normal Pro main event on Sunday, racers also competed in a special WORCS X race on Saturday night, which also counted toward the WORCS pro championship, so this was one round not to miss for those pros in the hunt for the championship.

For the Sunday event, Justin Seeds jumped out to the early lead followed by Ricky Russell, but Seeds let Russell by once they got into the woods, which allowed Russell to build a gap on the competition.  Russell remained unchallenged to secure his first WORCS Pro win, which was in his home state.

Gary Sutherlin had a difficult weekend, though he finished second in both Saturday’s WORCS X, as well as Sunday’s event. Sutherlin went down at the start of the Pro main on Sunday, which sent him to near the back of the pack, so he had his work cut out for him to charge his way up to a second place finish.

After a two year hiatus, Jacob Argubright claimed the final spot on the podium.  Argubright has spent most the year recovering from a wrist injury, which has kept him from racing, but it didn’t show in his performance this weekend as he battled for the final podium spot with Justin Morgan for several laps.

The WORCS points leader Robby Bell returned to competition this weekend after a hard crash three weeks ago at Glen Helen, which knocked out nine teeth and fractured his jaw, but despite not riding since the accident, Bell salvaged some valuable points this weekend finishing seventh and eighth, which allowed him to hold onto a 39-point lead going into the final two races of the season.

While Eric Yorba finished ninth on Sunday during the Main event, he was on fire on Saturday as he went on to claim his first WORCS Pro win in the WORCS X race after charging his way into the early lead, and he was able to stay ahead of Sutherlin to claim this win.

Ty Tremaine rounded out the WORCS X Pro podium behind Sutherlin on Saturday for a KTM podium sweep, and Tremaine was in the running for another podium finish on Sunday when he went down and mangled his motorcycle, which forced him out the race, but fortunately he wasn’t injured in the get off.

In the Pro2 class, Dalton Shirey claimed both wins this weekend, which gave him a big boost in points over Justin Wallis finishing in second and third this weekend.  Dustin McCarthy was able to edge out Wallis on Sunday during the Pro2 main event to claim the second spot on the podium.

Logan Chambers claimed the Pro 2 Lites class win in dominate fashion on Saturday during WORCS X, but the top honors on Sunday went to Dante Oliveira with the win followed by Carson Giles and Mitch Anderson.

The next round of the Rocky Mountain MC World Off-Road Championship Series presented by Maxxis and Dirt Bike is nearly two months away on September 26-27th for Round 8 at Glen Helen Raceway in southern California.