Posted on April 12, 2015 by Podium Promotions Leave a comment 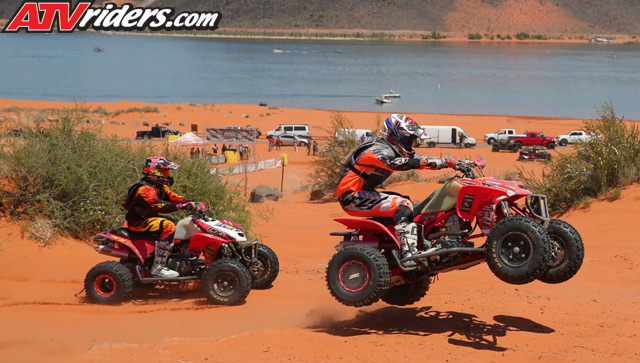 Sand Hollow was a tough track with plenty of sand, rock beds and rough conditions. Dry weather was on tap, which did cause some dust, but that didn’t stop David Haagsma from charging his way to the top of the podium.

H&M Motorsports’ David Haagsma grabbed the Pro ATV holeshot and led his race from start to finish. Beau Baron tried to close the gap on him late in the race, but Haagsma was determined to stay out front. “My quad started right away and my Maxxis tires hooked up and I grabbed the holeshot. It was really rough out there but I stayed out front. Beau kind of closed in on me late in the race and I wish he was 100% healthy because I think it would have been a good race between us. It feels great to get another win. I have been practicing and I am really pumped for the next round,” said Haagsma.

H&M Motorsports’ Beau Baron came on strong and was feeling much better after an injury he sustained during the Lake Havasu round. “My shoulder wasn’t broken so it is feeling a lot better so I went out there and gave it my all,” said Baron. Baron was in the number four spot early in the race and inherited second in the final laps. Once in second, Baron began to close the gap on David Haagsma, but was not able to get close enough to make a move. While racing, Baron also was stung by a bee, which he is allergic to, but continued to race and took a solid second place finish.

Collins Webster, who was racing with the H&M Motorsports team for the weekend, was toward the back of the pack of the start but at the midway point he was able to move into third place for his first WORCS Pro Podium finish.

Pro Motorsports’ Jeff Hancock was at the back of the pack off the start and went down early in the first lap, but he came back to claim the fourth spot.

Robbie Mitchell charge ended when his stator failed, but he was towed back to the pits by David Flores to replace it, so he finished three laps to atleast salvage some points in the championship race. Garrin Fuller was running up in second place but he crashed in the third lap and injured his shoulder, which took him out of the race, and hopefully he will be back to 100% at the next round.

In the Pro-am class, Mike Sloan continued to dominate with his fifth straight win of the season. “This course is really similar to where I used to live so I really liked it. I got out there and chose good lines and I was able to take the win and get third overall. It feels great getting these wins. It has been a great season for us so far and I am hoping to stay on top of the box,” said Sloan.

Alex Ortiz was looking good off the start and was holding down the number three spot. Ortiz caught up to Matt Hancock, who was in second and began battling. The pair battled hard with Ortiz taking over second and claimed his best finish of the year in second and Matt  Hancock rounded out the Pro-Am Podium.

Round number six of the 2015 Rocky Mountain MC World Off-Road Championship Series presented by Maxxis and Dirt Wheels series will head to Cedar City, UT on May 22-24 where the points battles will be heating up as the series heads into the final rounds of the season.