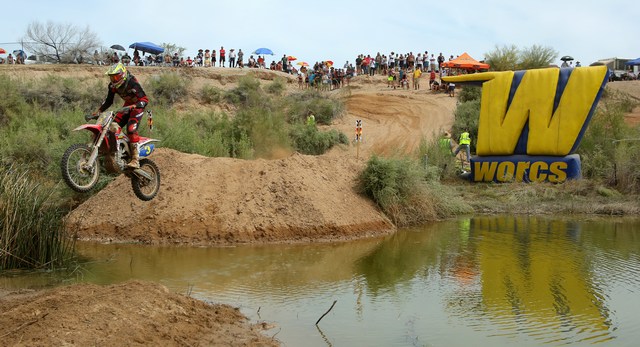 For the fourth straight time, Robby Bell has claimed the win in the 2015 Rocky Mountain MC World Off-Road Championship Series presented by Maxxis and Dirt Bike. Bell remained undefeated at the Crazy Horse WORCS race with Justin Jones claiming the second spot on the podium followed Blayne Thompson in third.

For round four of the WORCS series, the racing action headed to Lake Havasu City, Arizona, which is one of the favorite races for many because of its great location right along the lake shore.  While the location is great, the track is one of the roughest of the year with it loose sand and gravel, which gives way to deep ruts and whoops.  It is also known for its lagoon jump, which was really tamed down this year compared to years past, but one of the biggest challenges this weekend was the near record heat with temps approaching triple digits.

Without a starting gate, the race was a dead engine start, and Red Bull / KTM’s Ivan Ramirez grabbed the holeshot followed by RPM / KTM’s Travis Coy and Precision Concept’s Robby Bell.  Before the end of the first lap, Bell had already charged his way into the lead.

Once out front, Bell was able to run away with it because Hinson / Honda’s Justin Jones also quickly worked his way up through the pack to challenge Bell for the front spot with Jones shadowing Bell for the first six laps of the race.

By the checkered flag, Bell had gapped Jones by over a minute to claim his fourth straight win of the season and remains undefeated in 2015.

Justin Jones matched his WORCS career best finish by claiming the second spot on the podium, and it didn’t come easy as he got off to a last place start. With his second podium finish of the season, Jones is now second in the point’s race behind Bell, but with a 22 point gap between the two, Jones will have his work cut out for him to reel in Bell before the end of the nine round series.

Zip Ty Racing’s Blayne Thompson to claim his second straight podium finish. Thompson got off to a near last place start and went down twice early in the race, but he once he got into a rhythm, he was able to start pushing his way up through the pack and claim the final spot on the podium.

John Burr Cycle’s Justin Seeds was back in action at the WORCS series for round four after not making the last race in Arizona.  Seeds ran a solid race and attempted to challenge Thompson for the final podium spot late in the race.

For the second straight race, the KTM mounted Dylan Schmoke rounded out the top five in the pro class.

In the Pro 2 Class, Dalton Shirey claimed his second win with a dominant performance at Lake Havasu.  He launched off the starting gate to grab holeshot and lead from start to finish to take the win, and Shirey was the only Pro 2 race to complete all eighteen laps and finished an impressive fourth overall. After missing round three for his sister’s wedding, Michael Del Fante claimed the second spot on the podium for his third podium finish of the year, and Benny Breck made his podium debut in the third spot.

In the Pro 2 Lites class, Logan Chambers claimed his third win of the season, which made him within three points of the point’s leader, Mitch Anderson who finished in third.   The 15 year old, Dante Oliveira claimed his second straight podium finish in the second spot.

Round five of the 2015 Rocky Mountain MC World Off-Road Championship Series presented by Maxxis and Dirt Bike heads to Sand Hollow in St George, Utah on April 17-19th, which is one of the most scenic race locations of the year.