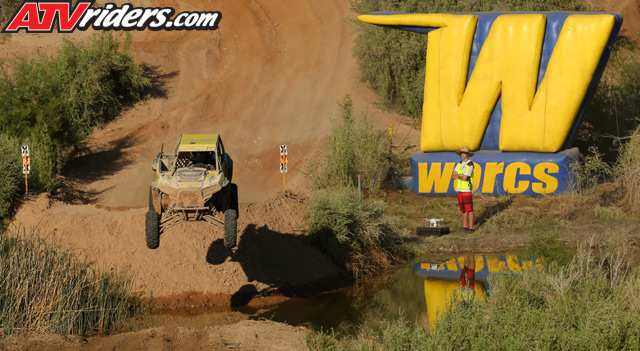 Lake Havasu City, AZ – Mitch Guthrie, Jr. took top honors in the SxS Pro class at round four of the 2015 Rocky Mountain MC World Off-Road Championship Series presented by Maxxis and Dirt Wheels in Lake Havasu, AZ and was joined on the podium by Ryan Piplic and RJ Anderson while Jacob Shaw claimed victory in the Pro Stock class.

Lake Havasu is one of the most popular rounds of the WORCS series but record high temperatures reaching the 99 degree mark may have had racers thinking otherwise for this round. A lack of wind also caused some dusty conditions but Mitch Guthrie, Jr. overcame the desert heat in the SxS Pro class.

Mitch Guthrie, Jr. had a good start and was in a three way battle with Ryan Piplic and RJ Anderson for the lead. Guthrie began to close in on Anderson and was able to take over the lead when Anderson encountered an issue and bring home the win.

Ryan Piplic was strong off the start and immediately began to battle for the lead. Piplic eventually crossed the finish line in second place, which was enough to earn him the points lead.

Polaris/Walker Evan’s RJ Anderson grabbed the holeshot and led for a couple of laps. Anderson was pulling away in the lead but accidentally switched his vehicle to 2WD somehow and thought he broke something, which forced him to slow down and drop back to third place where he held it to the finish.

Mickey Thomas had a tough race but managed to come away with a fourth place finish after flipping over early in the race.

In the Pro Stock class, Jacob Shaw was in the top five off the start and caught up to the leader, Cody Rowley. Shaw was able to take the lead and take home the win with a last lap pass. Codey Rowley had a great start and led for most of the race until the final lap when Shaw was able to get by, leaving Rowley with a second place finish while Ronnie Anderson took his Polaris to the number three spot.

The Unlimited class was very competitive, but Mitch Guthrie, Jr. came away with the win in that class as well.Jeff Obering had a good start and despite a very rough track, Obering was able to finish in second place while Matt Hancock rounded out the top three.

The increasingly popular Powder Puff class was exciting as well with Danielle Weatherly taking her third consecutive win. Jamie Piplic came up from a mid-pack start and charged her way to a solid second place finish, while Brandy Baron rounded out the top three. Lisa Cernius came from the back of the pack to finish in fourth and Donna Ellsworth placed fifth.

Round five of the 2015 Rocky Mountain MC World Off-Road Championship Series presented by Maxxis and Dirt Wheels will head to Sand Hollow in Hurricane, UT on April 17-19th, where the battles will be heating up in the sand.