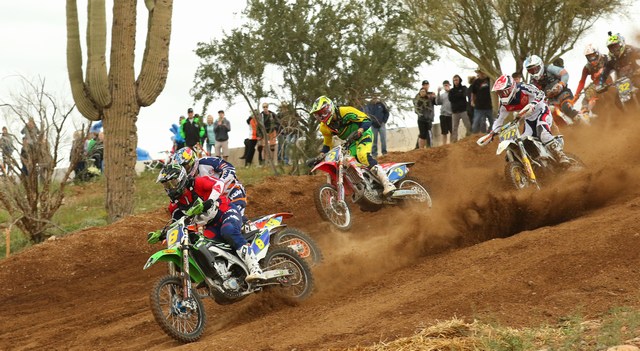 Peoria, AZ – Robby Bell extended his winning streak to three straight at Canyon MX in the 2015 Rocky Mountain MC World Off-Road Championship Series presented by Maxxis and Dirt Bike. While Bell continues to dominate the top of the box, there were several pro rookies making their WORCS Pro podium debut at round three with Blayne Thompson claiming the second spot and Travis Coy rounding out the WORCS Pro Podium.

WORCS racers were treated to racing nearly the entire Canyon MX motocross track, which had a great mix of challenging jumps, but the off-road proved the most challenging with rocks, whoops, silt beds, and some single track thrown into the mix as well.


The Kawasaki mounted, Destry Abbott, grabbed the Holeshot, and held the lead for several laps before he was forced out of the race with an injury, which allowed Precision Concept’s Robbie Bell to take over the lead in lap three.

Soon after, Bell was challenged by Red Bull / KTM’s Ivan Ramirez for the lead, but Ramirez would also suffer a serious wreck in the rocks, which also ended his day just after recording the fastest laptime of the race. Bell wasn’t immune to the rough track as he also went down a few times himself, but he was able to remount and continue his charge up front. “I’m not overly pumped on my ride. Like I said I am happy with the result, but I’m not happy with the way I rode. I crashed three times, but it was just about keeping the bike moving forward,” said Bell.

With the reigning WORCS Pro champions, Gary Sutherlin, missing from the lineup after breaking his wrist at the Hare and Hound race last weekend, Bell now has firm control of the points lead with his third straight win to start the season.

Zip Ty Racing’s Blayne Thompson scored his first WORCS Pro podium finish in the second spot as he charged his way from the back of the pack.  Thompson battled back and forth with RPM / KTM’s Travis Coy for several laps, but Thompson kicked it into high gear in the final lap to pull away from Coy and close the gap on Bell. “I am really happy to be up here. I have to thank Zip Tie Racing, Focus Raw Nutrition, TORCO, GPR, Pro Circuit, my Mom and Dad, Seat Concepts and Maxxis tires,” said Thompson.

The 2014 Pro 2 Champion, Travis Coy, rounded out the pro podium after battling his way up from seventh place.  “I’m stoked to be up here. The track claimed a lot of people but I like a tough gnarly track. The rock sections and rocky creeks were my favorite and where I felt most comfortable. The sand sections were tough and so was the rest of the track. I am happy to be up here, I wanted to get Blayne but I am happy to be up here in third,” said Coy on his podium finish.

Hinson Honda’s Justin Jones was have a great run in the second spot before he lost both his front and rear brakes, which forced him into the pits for several minutes, but with all the carnage, he only dropped back to fourth place, and while he was attempting a charge in the final lap, he went down hard, but still managed to hold onto the fourth spot, which boosted him into the second spot in the championship points race.

In the Pro 2 Class, Justin Wallis claimed his first WORCS Pro 2 class win with a minute to spare over second place finisher Brandon Prieto and Travis Damon in third.

Round four of the 2015 Rocky Mountain MC World Off-Road Championship Series presented by Maxxis and Dirt Bike heads to Lake Havasu, Arizona on March 27-29th for the Crazy Horse GP, which is one of the favorite locations of the year for many of the racers.